The end of the club season means individual awards are dominating the discourse right now in European football. Well, if you can't beat them, join them.

Rather than just run through the usual categories highlighting the best player and best coach – although we will do that, too – why not focus on some alternative prizes?

Relying heavily on Opta data, we'll steer clear of team honours – a blow to Wout Weghorst, whose eight blocks (leading all forwards in Europe's top five leagues) might have carved out a spot leading the All-Defensive First Team – but there remains plenty to go at...

Only one player had more goal involvements than Karim Benzema (39) in the top five leagues this season, and Real Madrid would really rather not talk about the man top of the charts. That other leading France forward had a hand in 45 goals, yet the value of Benzema's contributions to a LaLiga title triumph separates him from the rest.

Benzema's goal involvements were worth 29 points across the season, the most of any player, with Kylian Mbappe, of course, second on 28. Just considering Benzema's 27 goals, he accounted for 20 points – trailing Dusan Vlahovic (22 points) alone. 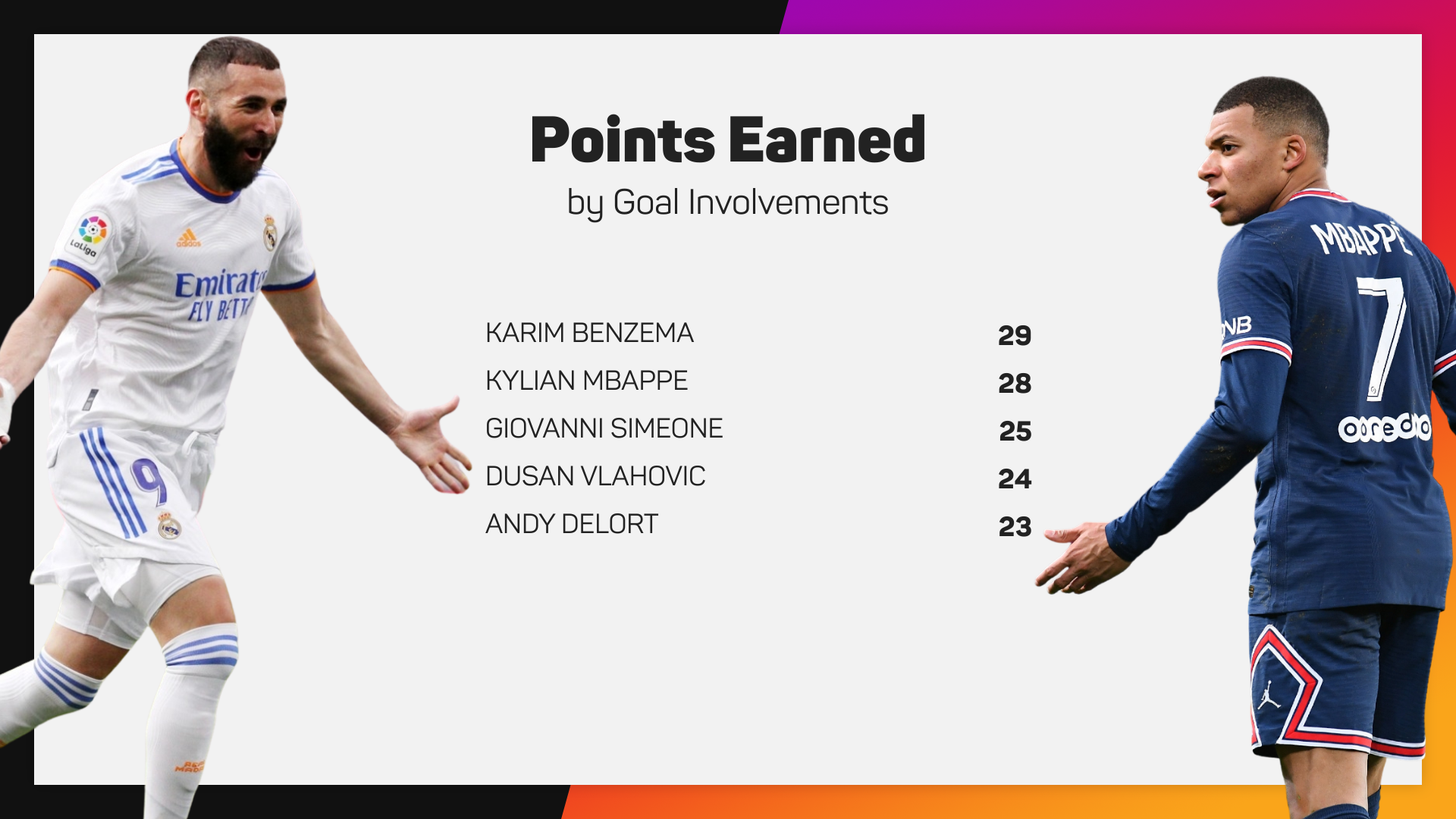 Required to perform repeated rescue acts in the Champions League, too, Madrid's number nine played only 2,596 minutes in LaLiga – or 75.9 per cent of the full season. He was therefore involved in a goal every 67 minutes, narrowly second in this regard behind Erling Haaland (66 minutes) among those to play 1,000 minutes or more across Europe.

Coach of the Year

Were this the NBA, Carlo Ancelotti would surely also qualify for the Lifetime Achievement Award. In guiding Benzema and Madrid to the LaLiga title, the Italian became the first coach to win each of Europe's top five leagues, following successes in Serie A with Milan, the Premier League with Chelsea, Ligue 1 with Paris Saint-Germain and the Bundesliga with Bayern Munich.

Ancelotti, also the oldest LaLiga-winning coach at 62, earned only two more points than Zinedine Zidane had in finishing second in the prior season, but Madrid maintained this high standard despite losing both of their senior centre-backs heading into the campaign as they seemingly saved for the now failed pursuit of Mbappe.

Meanwhile, Everton, the team Ancelotti left for his second Madrid stint, finished 20 points short of their 2020-21 total, spending the season battling relegation rather than chasing Europe and perhaps putting his work at Goodison Park in context.

Rookie of the Year

Given the differences between the NBA and Europe's top five leagues, it is difficult to quantify exactly how many players might be considered 'rookies', let alone identify the best of them. Someone like Luis Diaz, for example, played his first minutes in the top five leagues this season, yet he had already scored goals in the Champions League and Copa America so surely doesn't fit the bill.

On the other hand, Hugo Ekitike definitely does.

Among the nine players who were teenagers at the start of the season and finished with 10 or more goal involvements, only Ekitike had never previously started a game in Europe's top five leagues. His 13 involvements in 2021-22 (10 goals, three assists) arrived every 98 minutes on average, the best rate of this group and the 18th-best overall – just behind Neymar (also 98 mins) and ahead of Son Heung-min (101 mins).

The 19-year-old Reims forward, who turned down a transfer to Newcastle United in January before sustaining a thigh injury, scored with an astonishing 32.3 per cent of his shots – second behind Wissam Ben Yedder (34.7 per cent) among players with 20 or more attempts – and has been linked with moves to PSG and Borussia Dortmund, as well as St James' Park. 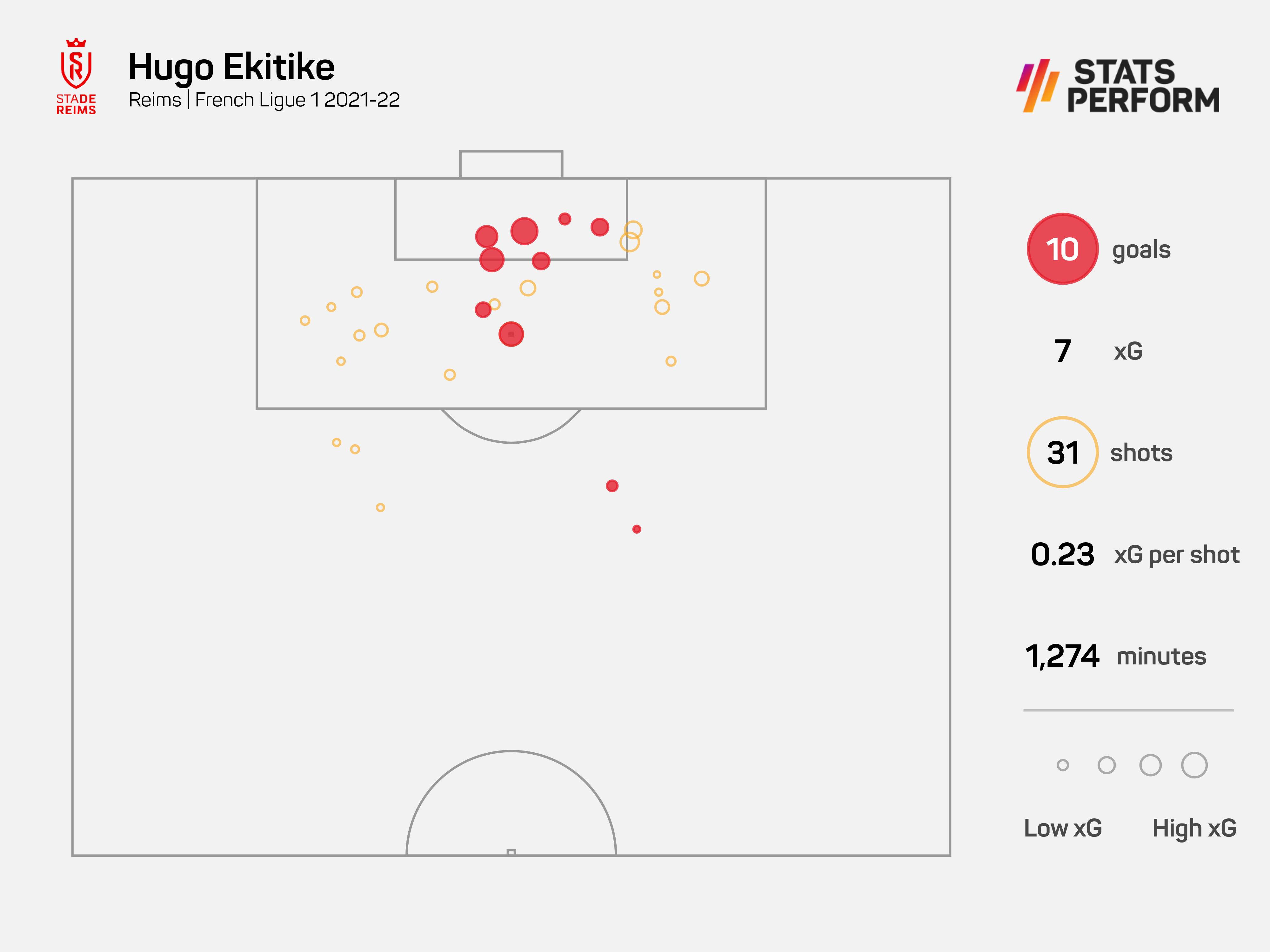 Defensive Player of the Year

As elsewhere, many of these awards focus on offensive talents, so there is a dedicated category for the best defender – and there could really only be one winner this year.

Injury restricted Virgil van Dijk to 371 minutes in 2019-20, and he was badly missed by Liverpool in their title defence, as they conceded 42 Premier League goals – their most since shipping the same number in the season before the centre-back's 2018 arrival.

With Van Dijk fit again this term and missing only four matches, the Reds conceded the joint-fewest number of goals across the top five leagues (26, tied with Manchester City). No defender played a part in more clean sheets (21).

Those figures show the impact Van Dijk had on the team as a whole, but his performances in individual battles were equally impressive. The Liverpool man won 73.5 per cent of his duels and 77.5 per cent of his aerial duels – both the best marks of defenders to make 30 or more appearances in the top five leagues.

Comeback Player of the Year

Okay, so the NBA no longer highlights a Comeback Player of the Year, but the NFL continues to identify an individual who has overcome the adversity of the previous campaign, allowing us to recognise one of the stories of the season.

Of course, for the reasons outlined above, Van Dijk might have had a claim to this prize in any other year, yet he is beaten this time by a player who actually won Serie A in 2020-21.

Within weeks of that title triumph, Christian Eriksen suffered a cardiac arrest at Euro 2020, prompting fears for his life and then, even after his recovery, his career.

But Eriksen was fitted with an ICD, left Inter, joined Brentford in January and promptly won each of the first five Premier League games he started for the relegation-threatened Bees. Finishing with seven victories from 10 starts, only nine players in the top five leagues created more chances over this period than Eriksen (29, including four assists).

There were no shortage of players showing signs of significant improvement in 2021-22. Five-goal Euro 2020 forward Patrik Schick starred on the club stage at last, Newcastle striker-turned-midfielder Joelinton enjoyed a resurgence and Vinicius Junior was outstanding as Benzema's foil, but Christopher Nkunku stood head and shoulders above the rest as he swiftly established himself among Europe's elite.

Nkunku had scored a mere six goals and assisted the same number for RB Leipzig in the 2020-21 Bundesliga, but those goal involvements increased dramatically from 12 to 33 this season, ranking fifth across Europe's top five leagues and joint-third when excluding penalties (32). With 20 total goals and 13 assists, the newly capped France international was one of just 12 players to reach double figures in both categories.

Of players to feature in at least 20 games in each of the past two campaigns, only Moussa Dembele (20) and Schick (15) improved their season-on-season goal tallies by a greater margin than Nkunku (14); Dembele alone (24) showed greater improvement in terms of goal involvements (21). 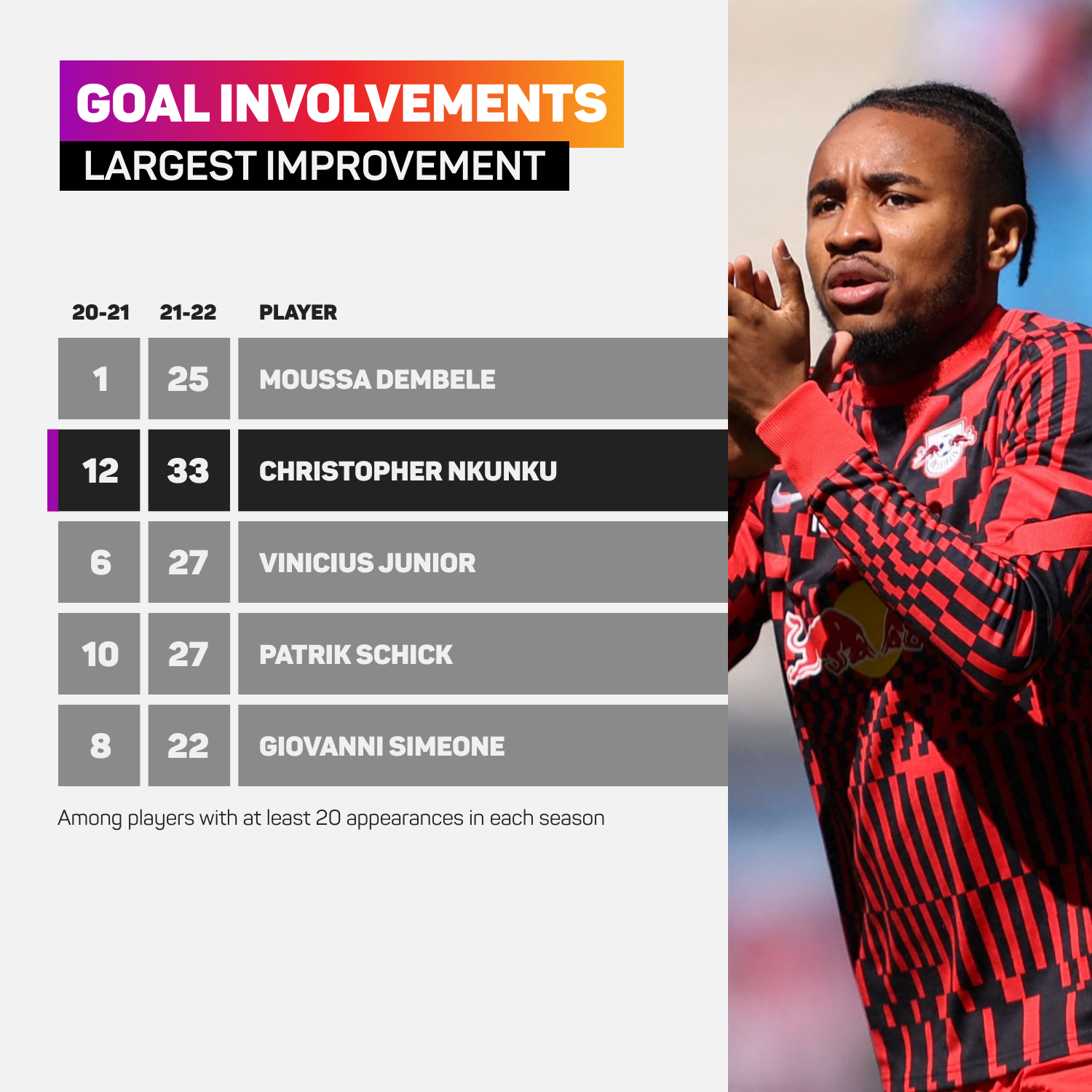 In a season in which Leipzig recovered from a slow start to make the top four by a single point, Nkunku's contributions were vital. He had a hand in 45.8 per cent of their Bundesliga goals and 50.8 per cent of those he was on the field for.

Twelfth Man of the Year

The NBA's Sixth Man of the Year is recognised as the season's most impactful bench player, which feels like a nice addition here.

Were this a long-standing European football award, it might have by now been renamed in honour of Ole Gunnar Solskjaer, who scored 17 goals in 84 Premier League substitute appearances – one every 88 minutes on average. Given Rodrygo Goes and Eduardo Camavinga largely reserved their heroics for the Champions League, the 2021-22 equivalent in the top five leagues could be Matheus Cunha.

Ben Yedder scored the most goals from the bench this season, but those seven counted towards 25 in total as he also started 29 matches. Cunha was restricted to only eight starts for Atletico Madrid, yet he scored three and assisted four in 21 outings as a substitute, matching Ben Yedder and Ignacio Pussetto with a Europe-high seven such goal involvements.

Atletico's man in times of need, Cunha contributed to vital goals, too. He was one of only two players to both score and assist in the same game as a substitute on more than one occasion (also Arnaud Nordin), with the second of those two performances seeing the Brazil forward introduced against Valencia with his side 2-0 down; Cunha scored seven minutes after his introduction and later teed up the winner in a 3-2 victory, justifying his season-long role as a super-sub.