Stephen Curry might be having a mixed bag of a season so far, but the Golden State Warriors superstar has ticked off a personal NBA first.

After 13 years in the NBA, Stephen Curry finally knows the exhilaration of hitting a buzzer-beater.

He kicked out at a courtside chair in frustration at one point on Friday evening, but the two-time MVP saved a big shot for last, his stepback 20-footer giving the Golden State Warriors a 105-103 win over the Houston Rockets.

Curry, whose shooting from the field has fallen short of his usual high standard this season, finished the game with 22 points and 12 assists, with the wobbling Warriors bouncing back from a sorry 121-117 overtime defeat to a depleted Indiana Pacers the previous night.

In the Pacers game, Curry had scored 39 points, but against Houston he made just six of 21 shots from the field. Ultimately, it hardly mattered thanks to his last-ditch heroics.

"It's good to know what that feels like finally," Curry said of his special moment. "We know we dropped a ball last night, and for 30 minutes or so this game was all over the place.

"Throughout the course of the season you can go through different dry spells.

"We're second in the West, and we're fine. We obviously know we've got to play better if we're going to win a championship. But there are different ways to lose basketball games and last night didn't set well with any of us.

"We had a good talk in our pre-game meeting about what we needed to do. There's always that uneasiness of knowing what you've got to do and then going out and doing it and dealing with adversity in the game when you're trying to show up and trying to bounce back, and that's what tonight was." 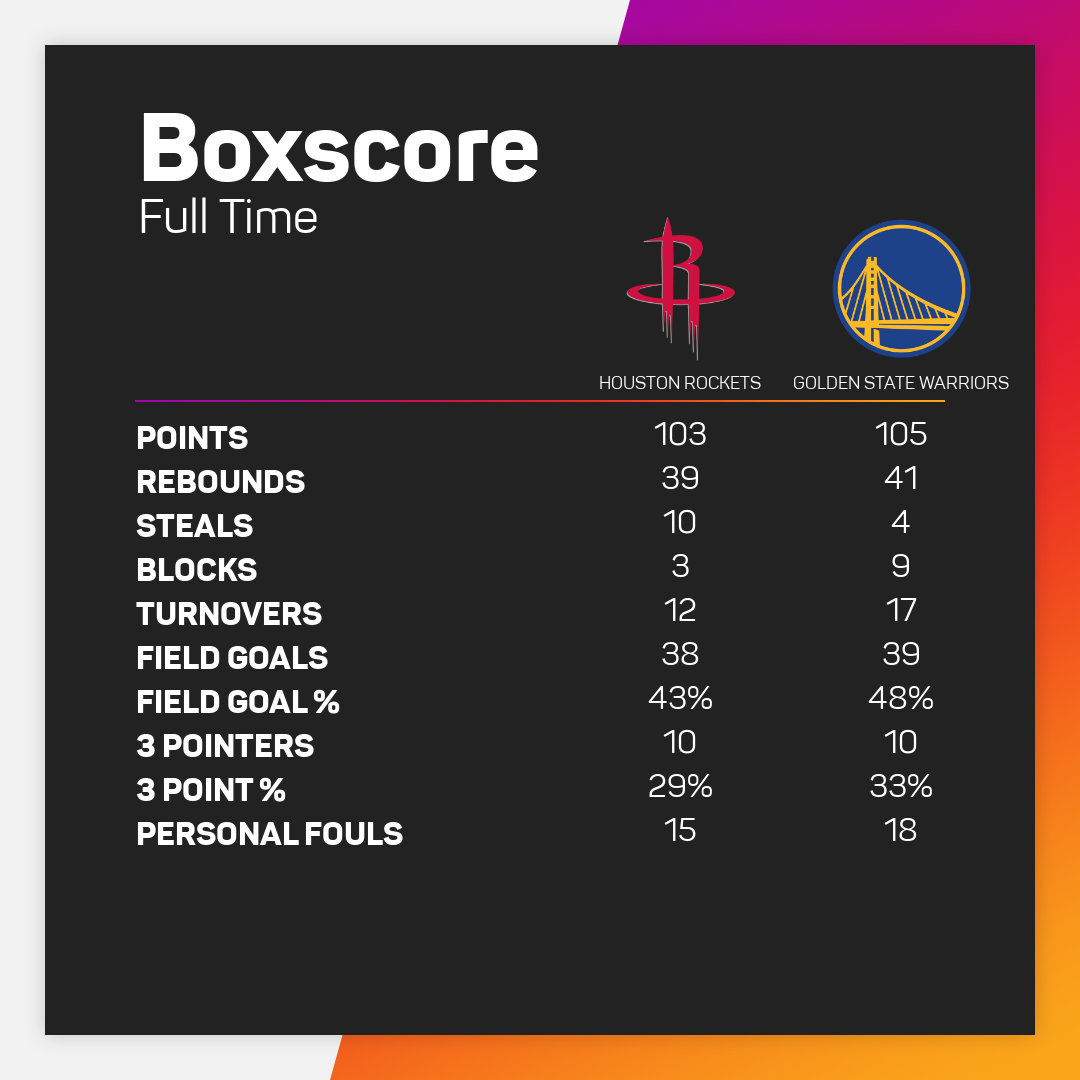 Curry spoke of an improved mentality from the Pacers game.

"It reminds you to keep the big-picture perspective on what we're trying to do, realise what it takes to continue to try to win at this level," said 33-year-old Curry.

"I liked the way we fought. Everyone contributed down the stretch leading up to the shot to give us a chance. We needed it, obviously. We've got to try to build on it and bring some joy back."

Even as his radar appeared to be off, Curry never stopped going for his shots.

"The worst thing you could do is shy away from that next opportunity," he said.

"The fact I had a shot to win it was because everybody stayed locked in, stayed focused and competed. That's a great sign in terms of what we're trying to build on."

His field-goal shooting is down at 42 per cent this season, by far the lowest of any year in his career, bar 2019-20 when he played just five times. Curry's career average is 47.2 per cent, and he knows he can improve.

"Somebody told me my open shots were like six or seven per cent lower than they usually are. There's no reason other than you're just missing shots," Curry said. "I obsess over it, but I don't panic. If I did, I wouldn't be shooting as much as I am to try to get myself through it.

"You want to be as efficient as possible, but you also want to win games, and whatever it takes to do that is the most important."

The Magic celebrated winning the NBA draft lottery on Tuesday, although they do not yet know how they will use the first overall pick.

'I like physicality' - Butler guarantees Heat intensity after Game 1 win

Jimmy Butler scored 41 points and sparked a third-quarter turnaround in the Miami Heat's 118-107 win over the Boston Celtics on Tuesday.

'It's on me': Tatum accepts blame for Celtics' third-quarter collapse in Heat loss

The Boston Celtics led by eight points at half-time before the Miami Heat's remarkable 39-14 turnaround.

The Miami Heat had a dominant 39-14 third quarter to take a 1-0 lead in the Eastern Conference Finals against the Boston Celtics.

The Orlando Magic last had the first pick in the 2004 NBA Draft, when they selected Dwight Howard.

The Boston Celtics have lost two important players for their opener against the Miami Heat in the Eastern Conference Finals.

LeBron James has a stake in Liverpool, and the NBA great is in a confident mood ahead of the Champions League final against Real Madrid.

In a Twitter Q&A, LeBron James said Luka Doncic is his favourite player in the league.

After losing to the Miami Heat in the 2020 Eastern Conference Finals, the Boston Celtics have become a true title contender for the rematch.

Erik Spoelstra is excited for a series he feels would suit Pat Riley, as two of the best defensive teams in the NBA will meet in the East.

After standing on the podium wearing the Russian pro-war symbol, Ivan Kuliak has been banned and must return his medal.

Eritrean Biniam Girmay's Giro d'Italia is over after a champagne cork did damage to his left eye.

Azeem Fahmi was disqualified from his men's 100m preliminary heat at the 2021 SEA Games after he was adjudged to commit a false start.

The Magic celebrated winning the NBA draft lottery on Tuesday, although they do not yet know how they will use the first overall pick.

Max Verstappen taking out the past two races has closed the gap to Charles Leclerc heading into this weekend's Spanish Grand Prix.

US PGA Championship: What a difference a year makes, with Mickelson opting out of title defence

Phil Mickelson was on cloud nine when he won the US PGA Championship, but he will be a notable absentee at Southern Hills Country Club.