Wimbledon: Berrettini overcomes Auger-Aliassime to set up semi-final with Hurkacz

Matteo Berrettini is into his second grand slam semi-final after beating Felix Auger-Aliassime to keep his Wimbledon dream alive.

Matteo Berrettini kept his momentum going with victory over Felix Auger-Aliassime in four sets to reach the Wimbledon 2021 semi-finals.

Champion at Queen's last month, Berrettini dropped just his second set of the tournament at SW19 but saw off Auger-Aliassime 6-3 5-7 7-5 6-3 in just over three hours.

The seventh seed hit 33 winners against Auger-Aliassime to set up a showdown with Hubert Hurkacz, who ended Roger Federer's quest for a ninth title earlier on Wednesday.

Berrettini promptly moved into a double-break lead but he then squandered four set points at 5-2 and allowed Auger-Aliassime to get back into it.

The Italian put things right in the next game even if he ultimately had to wait until his seventh set point, breaking for the third time in the set to move ahead.

Auger-Aliassime hit back with a break in the third game of the second, Berrettini finding the net after a double fault had given the Canadian an opportunity.

But a double fault of Auger-Aliassime's own allowed Berrettini to level matters at 3-3 and he soon forced three break points that would have allowed him to seize full control.

However, the younger man showed impressive character to save them and later broke again himself at 5-5 before holding to level the match.

The third set went the way of the serve until the 12th game when Berrettini earned a crucial break to move within a set of a showdown with Federer's conqueror Hurkacz.

And the world number nine did not look back as he got off to a flying start to the fourth set by breaking his nervy opponent in the second game.

Auger-Aliassime, who at 20 was bidding to become the youngest male to reach the Wimbledon semi-finals since Djokovic in 2007, failed to hit back and big-serving Berrettini saw the job through to advance. 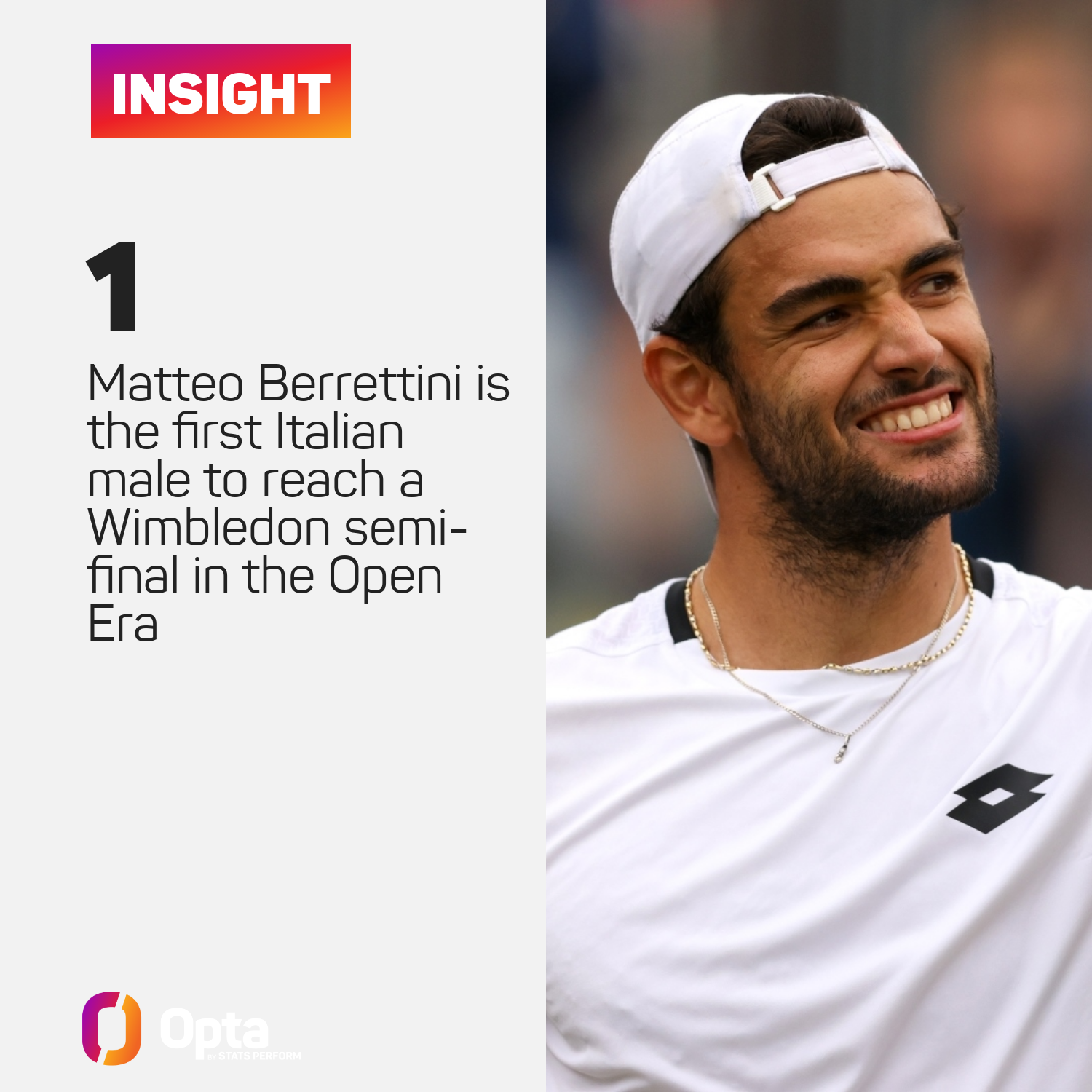 Berrettini showed more consistency than Auger-Aliassime, who was competing in his first major quarter-final, and with this victory becomes the first Italian to reach a Wimbledon semi-final in the Open Era.

The Italian has a 23-5 tour-level record on grass and, after winning his first ATP 250-level title at Queen's last month, he will now fancy his chances of overcoming Hurkacz for a place in the final.