Serena Williams looked unstoppable at the slams in 2015, until she came unstuck in New York. Novak Djokovic will attempt to go one better.

Novak Djokovic has history in his sights as he begins his US Open quest; after three grand slam titles in 2021, a fourth beckons at Flushing Meadows.

Rod Laver was the last man to achieve a sweep of the Australian Open, French Open, Wimbledon and US Open singles in the same year, all the way back in 1969.

Steffi Graf won all four on the women's side in 1988, and it seemed a knock-in that Serena Williams would do likewise in 2015 when she headed to the US Open with three majors already bagged.

But winning any title at that level is never easy, and Williams famously came unstuck when she faced Roberta Vinci in the semi-finals.

Djokovic will be mindful that what seems an inevitability to the outside world remains very much still only a possibility. After his US Open tribulations last year, and a recent jolt at the Olympics, he will know anything can happen.

Here, Stats Perform looks at how Djokovic's situation at Flushing Meadows carries most of the hallmarks of Serena's own position as she headed into the tournament six years ago.

IT'S ALL ABOUT THE SLAMS

It was not always this way, but Djokovic has reached the point in his career when he can choose targets, decide which records he wants to break, and throw everything at those goals.

At the start of the year in Australia, he savoured triumphing at Melbourne Park for a ninth time and pointed to how Roger Federer, Rafael Nadal, Williams and Margaret Court had achieved so much.

"They've made history already," Djokovic said. "They made a tremendous mark in our sport. I'm trying to build that and develop that myself in a very unique, authentic way that is suitable to me.

"Whether I think about winning more slams and breaking records, of course. Of course, I do. And most of my attention and my energy from this day forward, until I retire from tennis, is going to be directed in majors, trying to win more major trophies."

It had very clear echoes of Williams in 2015, also in Australia, setting out her own ambitions for the year and specifically targeting the French Open and Wimbledon.

"Those are the two I really have my eye on, because I would like to do better at those. And I know I can do better," she said.

Williams set her heart and mind on that twin challenge and won both.

"I definitely am not going to play as much this year, and I'm just going to go for everything when I do play," said Williams. 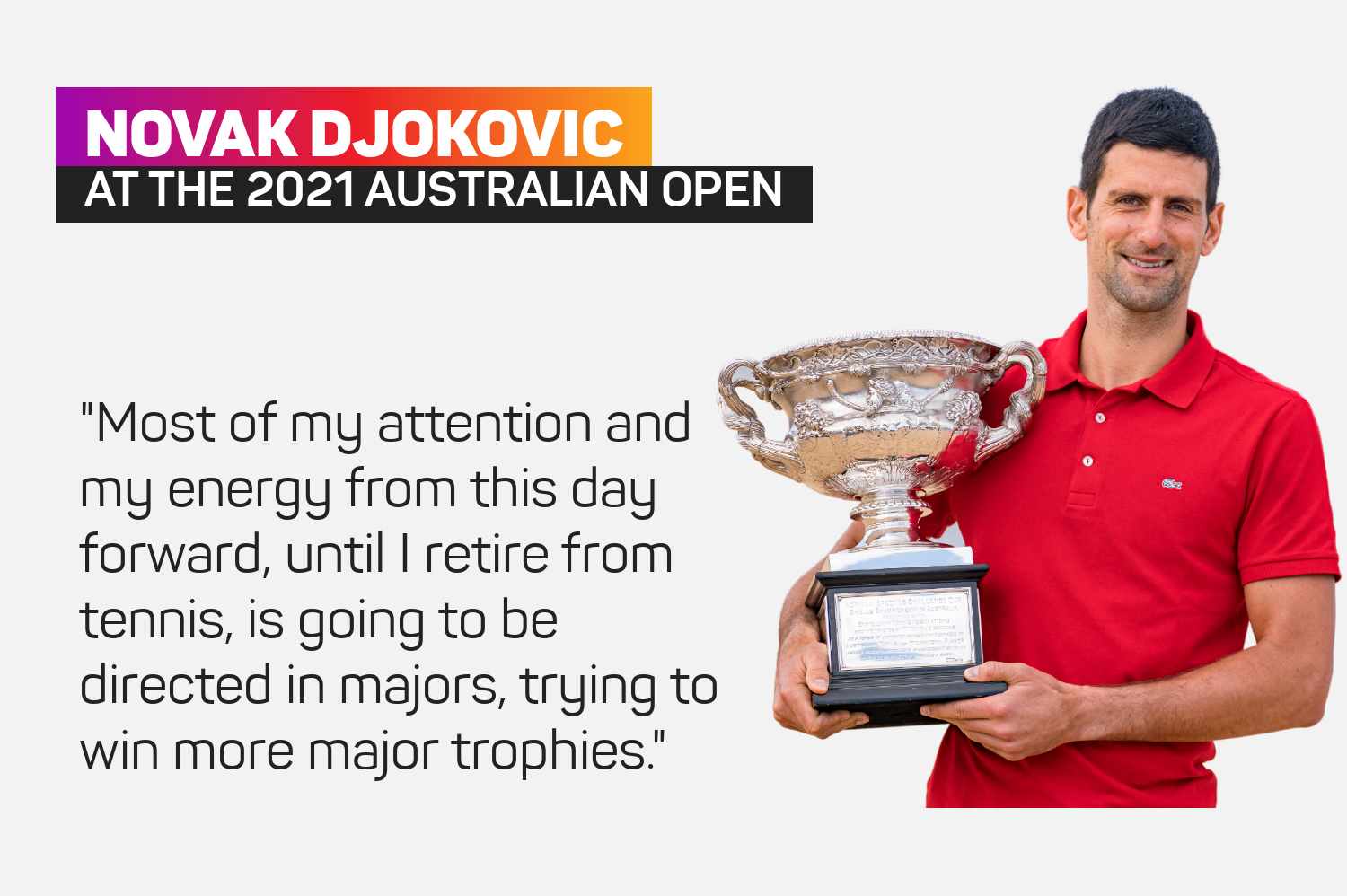 When Williams reached New York in August 2015, she had delivered a 48-2 win-loss record for the season, landing each of the majors alongside the Miami Open and the Western and Southern Open. Petra Kvitova in Madrid and Belinda Bencic in Toronto had been the only two players to get the better of the 33-year-old Williams.

Djokovic has a 38-5 record for the year, albeit it has the feel of a more dominant year for the 34-year-old Serbian. Two of those losses came at the Olympics, in a semi-final and bronze medal match, and the other three came in his first three events on clay, losing to Dan Evans in Monte Carlo, Aslan Karatsev in Belgrade and Nadal in Rome.

When it mattered on clay, though, Djokovic majorly turned up in Paris, gutsily beating Lorenzo Musetti from two sets down in the fourth round, ending Nadal's streak of four Roland Garros titles by sinking the Spaniard in the semi-finals, and then leaving Stefanos Tsitsipas devastated in the final, with another fightback after dropping the first two sets.

Wimbledon followed, and Djokovic by then was openly targeting a Golden Slam – each major and the Olympic title.

Much like with Williams and her loss to Bencic in the Toronto semi-finals six years ago, however, Djokovic showed he was fallible as history beckoned. From a set up, he lost to Alexander Zverev at Tokyo 2020, a blow that was compounded by missing out on bronze when Pablo Carreno Busta sprang another shock. 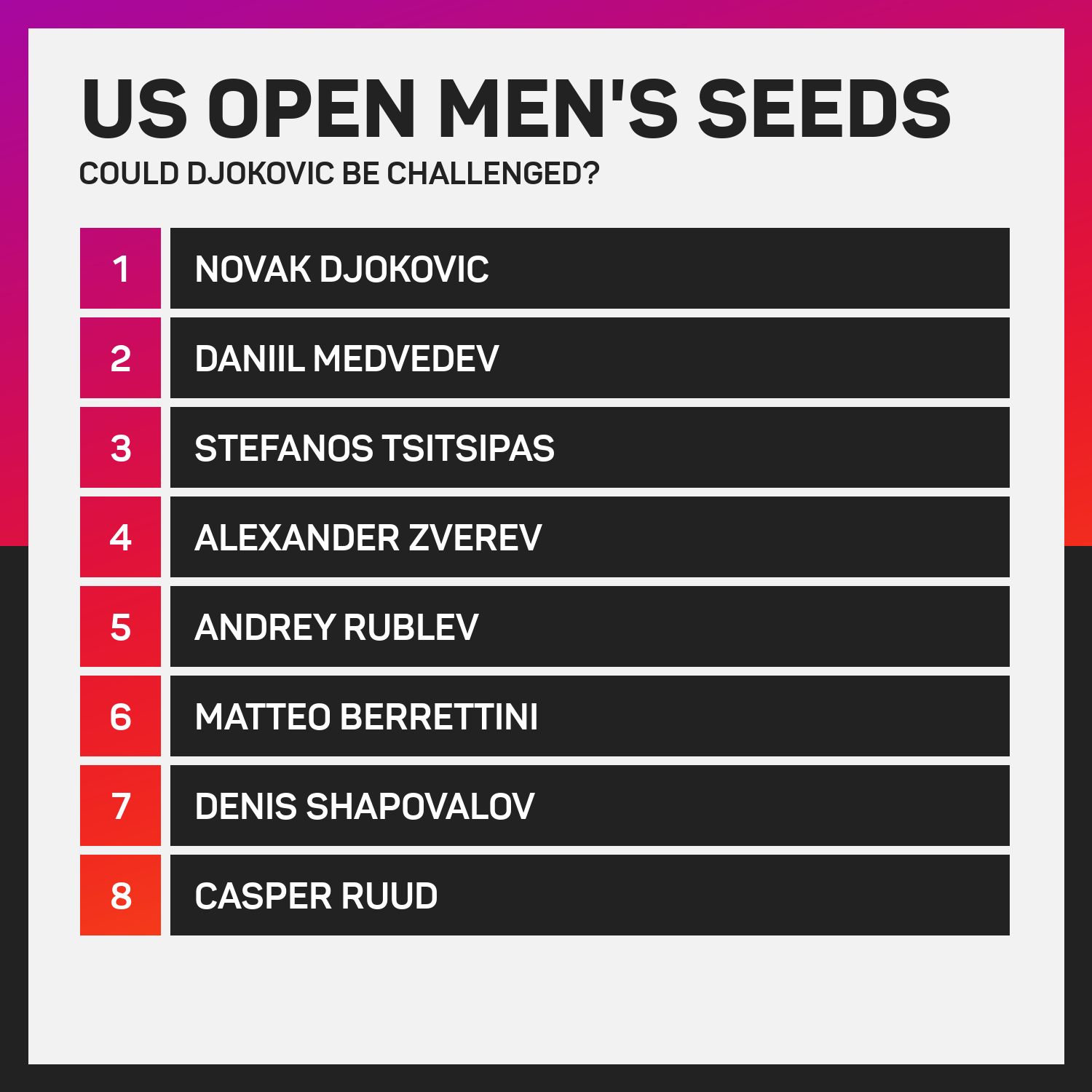 HISTORY CAN BE A FIERCE OPPONENT

Williams first achieved that from the French Open in 2002 to the Australian Open in 2003, and in 2015 she was aiming for five slams in a row at the US Open, having begun her dominant streak at her home grand slam the previous year.

She won the first set of the semi-final against Vinci, the world number 43, but was then second best to the Italian, with Williams saying her conqueror "played literally out of her mind".

But the disappointment was stark, underlined by Williams' terse response to the question of how disappointed she felt by the result.

"I don't want to talk about how disappointing it is for me," she said. "If you have any other questions, I'm open for that."

The four-in-a-row feat has only been performed once by Djokovic, from Wimbledon in 2015 to the French Open in 2016. Had he not been disqualified during the US Open last year for carelessly hitting a ball that struck a line judge, he would most likely currently be on a four-slam streak.

Those who win the first three slams of the year often do complete the set, but there are four instances of singles players falling one short by failing in the year's last major.

Before Williams, the most recent case was Martina Navratilova in 1984, when the imperious left-hander headed to the Australian Open – then played at the end of the year rather than the start – in pursuit of the Grand Slam. She lost to Helena Sukova in the semi-finals, and said: "If I'd have won, I'd have done it all. If I lost I had to start from scratch. Both are hard to cope with."

Navratilova had won 74 consecutive matches until that loss and ended the season with a 78-2 record.

The weight of expectation is immense for Djokovic as he pursues what would be his crowning glory, not only sealing the Grand Slam but reaching 21 majors, one ahead of Nadal and Federer and into the outright lead in the men's game. The prospect cannot be ignored, and it will be a heavy burden to carry over the coming fortnight.

As Djokovic said on Friday: "I would be lying if I said that’s not something that I’m thinking about or that my attention is not going that way.

"I’m very motivated to play my best tennis. But I have to hit one ball at a time, as they say, try to be in the moment, have a guiding star in a way, a dream to win a slam here."

Though he faces a tough challenge in the last eight, Andy Murray is growing in confidence after another win at the Moselle Open.

Favourite Swiatek through as Badosa crashes out of Ostrava Open

The top two seeds, Iga Swiatek and Petra Kvitova, made it through their second-round ties but Paula Badosa was eliminated on Wednesday.

Angelique Kerber suffered a shock first-round defeat at the hands of Jil Teichmann in the Ostrava Open on Tuesday.

Andy Murray made the decision to appear in the Moselle Open as a wildcard and he came from behind to defeat Ugo Humbert.