Australian Open: Nadal goes from career doubts to brink of record in Melbourne

Rafael Nadal is one win away from breaking a record, but such a run at the Australian Open seemed impossible just months ago.

Just months ago, there were doubts over Rafael Nadal's future. Now, he is a win away from a record-breaking major triumph.

The Spaniard is a win away from a 21st grand slam title, which would break his tie with Roger Federer and Novak Djokovic for the most won by a man.

Nadal ended his 2021 season in August after playing just seven events, a persistent foot injury not only derailing his season but threatening his career.

"Everybody around me, me included, of course, but everybody around me had a lot of doubts. Not about the Australian Open, no, but about coming back on the Tour because the foot was bothering me a lot of days," Nadal said after his third-round win over Karen Khachanov.

"Of course, still today there are doubts because the foot, as I said the other day, is an injury we cannot fix … so we need to find a way that the pain is under control to play, to keep playing. That's the goal.

"Honestly, I was not able to practice very often. But when I was practising, the feeling on the ball was quite good. There have been a lot of months without competing. The movements, all this stuff, you need to recover day by day. There is no way to recover those things without competing. That's what I need, keep playing. Already three and three, so six matches on my back, and positive ones. Every day a little bit better, so I'm happy for that." 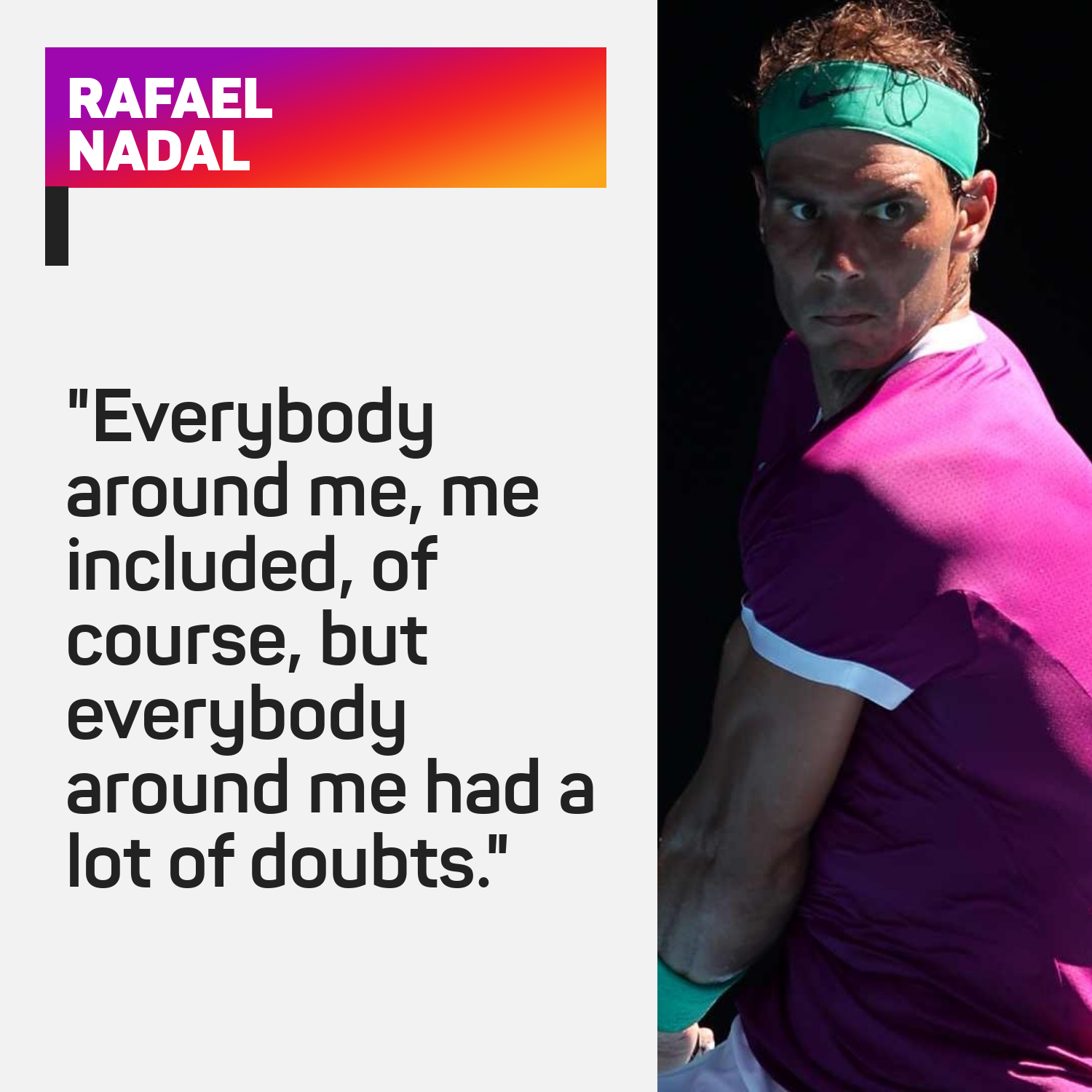 After a four-month absence, Nadal made his return at an exhibition in Abu Dhabi in December. Days later, he tested positive for COVID-19.

Still, he made the trip to Australia, winning his 89th ATP Tour title at the Melbourne Summer Set, his first hard-court crown since February 2020.

That success was incredible, given Nadal played just 14 tournaments in total in 2020 and 2021.

"Of course, when you are getting a little bit older, all the comebacks are tougher," Nadal said after beating Marcos Giron in the opening round. "This has been especially, well, difficult because it's not only a comeback from an injury, it's a comeback trying to be back on the Tour after almost two years playing not many events with the virus.

"If you remember in 2020 I only played here and Acapulco, then I just played in Rome, Roland Garros, Paris and London. Six events.

"In 2021 I played just here and then [it] was clay, Monte Carlo, Barcelona, Madrid, Rome, Roland Garros. Washington, yeah. Another six events – 12 events in two years are not many. If we add that I was not able to practice very often, too, it's a really tough one, no?

"But here I am. I am super happy about all the work that we have done to try to be back. We are here enjoying the tennis, and that's it. We're going to keep trying hard."

Nadal is back. Not just back playing, but back fighting his way into grand slam finals, and back in position to make more history.

In the final clay-court tournaments before the French Open, Casper Ruud and Cameron Norrie edged closer to picking up titles.