The Numbers Game: Liverpool and Man City prepare to do battle again in July Community Shield

League champions Man City face FA Cup holders Liverpool in an unusual Community Shield that is being held in July and away from Wembley.

Here we go again. Some 69 days on from taking their latest Premier League title battle down to the final minutes of the final day of the last campaign, Manchester City and Liverpool prepare to face off in the 2022-23 curtain-raiser.

Liverpool not only missed out to City on the title but also tasted defeat to Real Madrid in the Champions League final the following week, although the 2021-22 season was not all bad as they lifted both the EFL Cup and FA Cup.

It has been a busy window for both clubs in terms of incoming and outgoing activity, but England's two dominant forces appear certain to battle it out for a share of the major honours once again this time around.

The first of the trophies up for grabs is the Community Shield this weekend, contested between the winners of the previous season's Premier League and FA Cup.

While some question just how competitive the fixture exactly is – especially this campaign, with the match being held away from Wembley – it provides both sides with an opportunity to lay down an early marker for what is to come over the next 10 months.

Community Shield with a difference

If Jose Mourinho was so eager to count it as a major honour, then who are we to argue against the Portuguese, who lifted the shield with both Chelsea and Manchester United.

This year's game is a little different in more ways than one, though, as for the first time since 1958 – when Bolton Wanderers beat Wolves 4-1 in the month of October – the showpiece will be held outside of August, a knock-on effect of the World Cup being staged midway through the campaign.

It is also the earliest in the calendar year the match has taken place since 1922 when Liverpool were beaten by Huddersfield Town in May.

Not only is the traditional date of the fixture different, so too is the venue. With Wembley being used for the Women's Euro 2022 final on Sunday, the contest will be held away from England's national stadium for the first time in a decade, since City beat Chelsea at Villa Park.

The game is instead being hosted by the King Power Stadium, and that could be bad news for Jurgen Klopp, who has lost more games at this venue (five) than he has at any other ground as Liverpool boss, excluding Anfield. 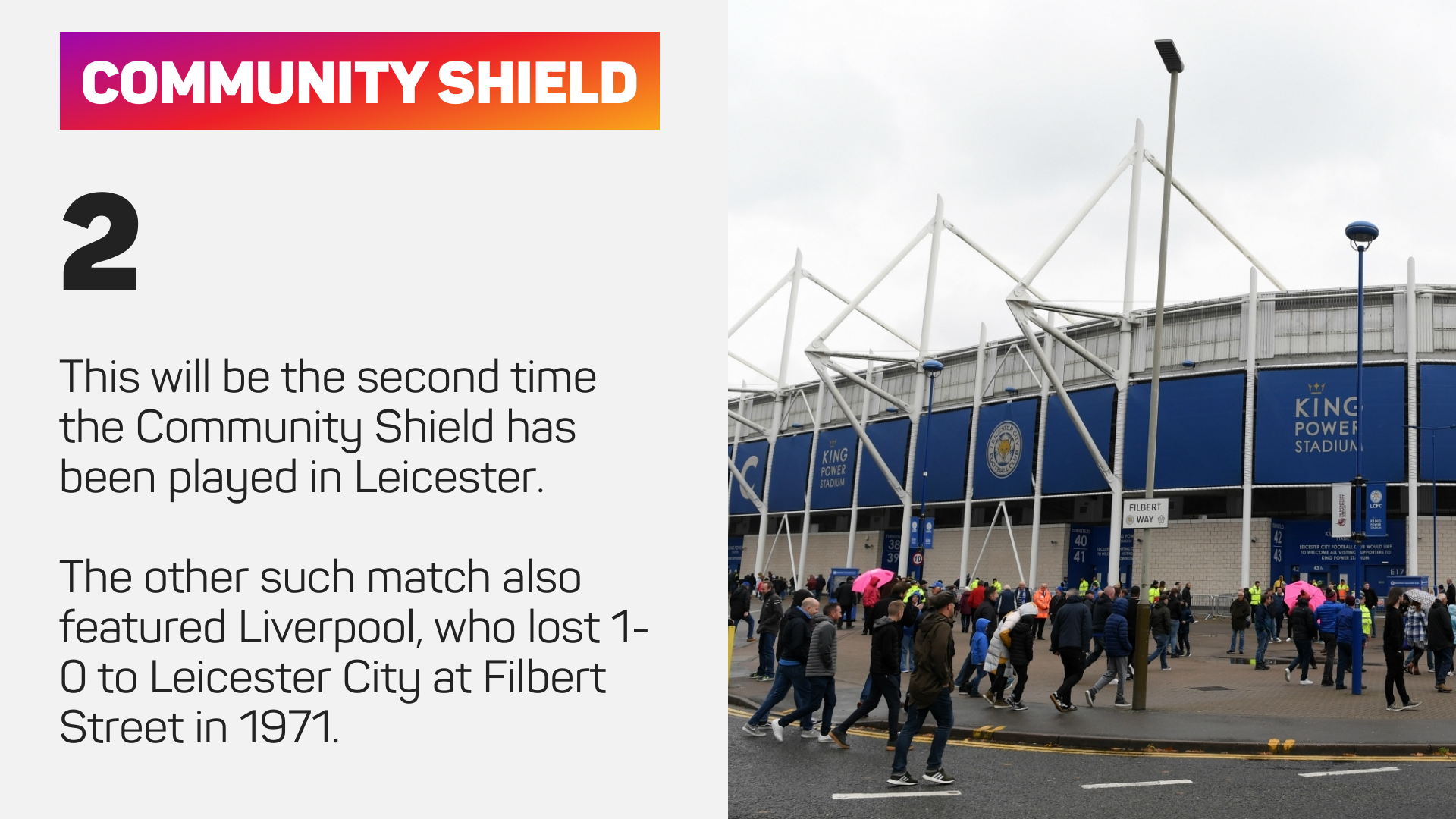 There are plenty of familiarities this weekend, however, not least the fact that it will be City and Liverpool facing off for a trophy – albeit with this only their second encounter in the Community Shield, following City's penalty shoot-out success three years ago.

Liverpool are aiming to lift the trophy for a 16th time, which would move them level with Arsenal and behind only Manchester United (21), including occasions when the shield was shared. City are sixth on the list of all-time winners, seeking their seventh triumph this time around.

City may not have had as much success in the curtain-raising fixture down the years as Liverpool, but they have triumphed in three of their past five appearances – in 2012, 2018 and 2019.

The Reds' record is far less impressive in recent times, having lost four of their past six Community Shield matches, including each of the past two against City in 2019 and Arsenal in 2020. 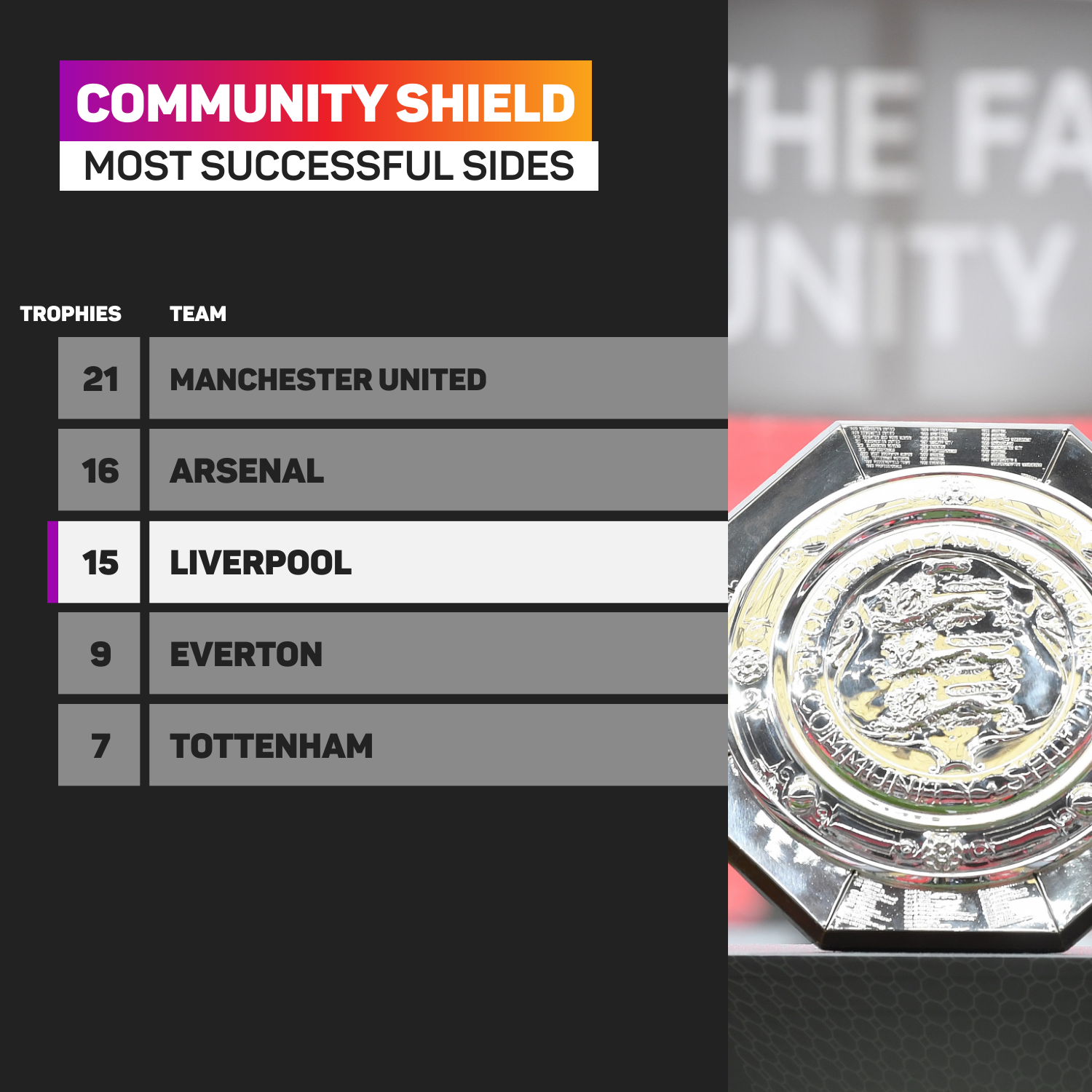 If recent encounters between these sides have taught us anything, it is that we can expect to be entertained at the King Power Stadium on Saturday.

Both teams have scored in eight of the past nine meetings between City and Liverpool in all competitions, including each of the past five in a row. Across those most recent nine matches, 33 goals have been netted in total – an average of 3.7 per game.

Last season alone saw both sides score at least twice in their three meetings in all competitions, which finished in a couple of four-goal draws in the league and a 3-2 win for Liverpool in the FA Cup semi-finals. 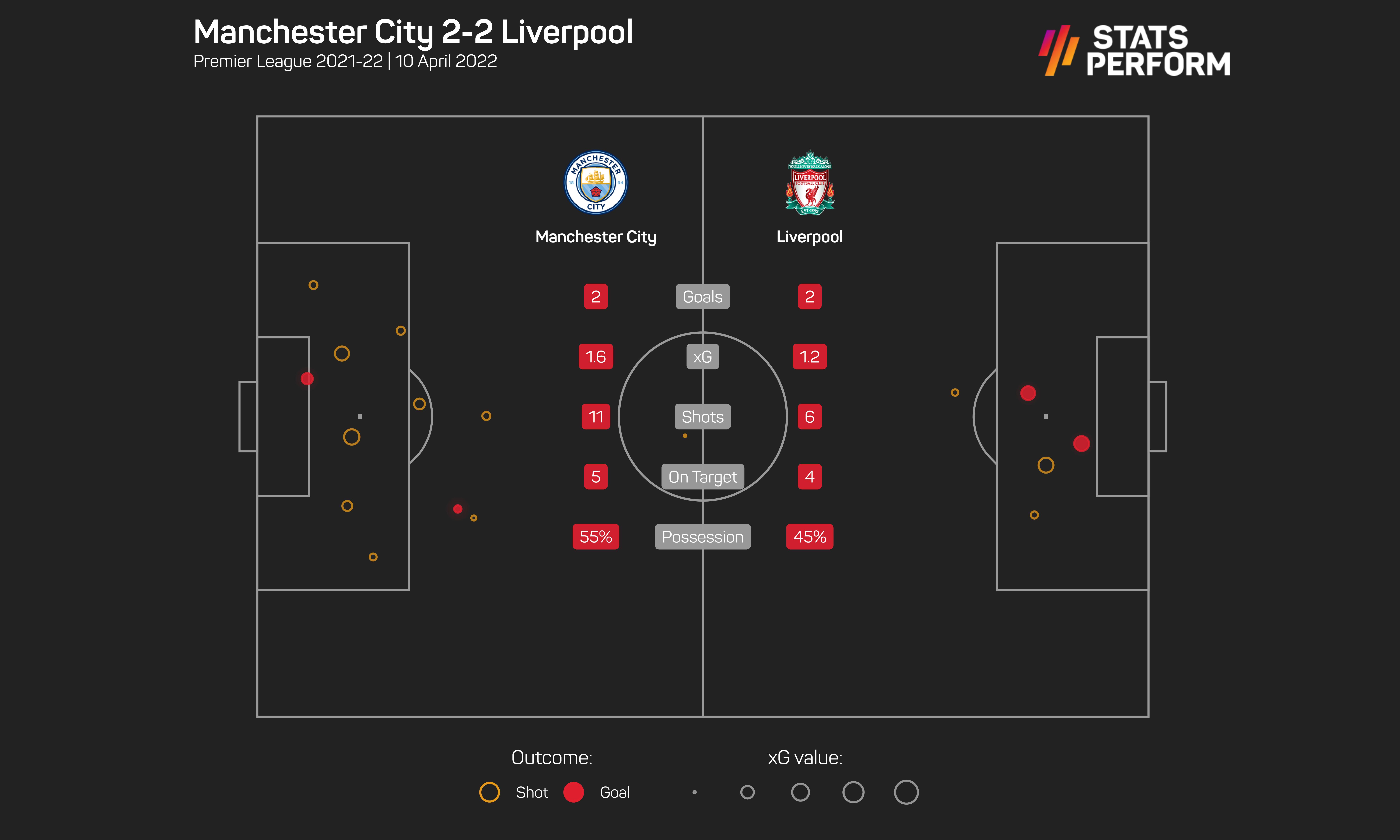 All eyes on Salah

Both sides will look slightly different following a busy period of transfers, and seeing how the likes of Erling Haaland, Kalvin Phillips, Darwin Nunez and Fabio Carvalho perform – if indeed used – will be one of the most exciting aspects.

There will be plenty of familiar faces on show, too, including Liverpool forward Mohamed Salah, who has been involved in 11 goals in 14 games against City for the Reds, making them his second-favourite opponent behind West Ham (12 goal involvements).

Pep Guardiola will also hope to get some minutes out of Phil Foden, who has yet to feature in pre-season due to visa issues that prevented him travelling to the United States.

The England international enjoys playing against Liverpool, scoring and assisting a combined five goals against them in five starts, although he has failed to do so in his past two outings in this fixture.

The new Premier League season is only 10 games old, but let's give into the temptation to draw early conclusions...

'It should have been more' - Haaland rues missed hat-trick opportunity

Erling Haaland scored twice on his Premier League debut for Manchester City but rued missing out on a hat-trick.

A brace from Erling Haaland on his Premier League debut gave Manchester City all three points against West Ham on Sunday.

Jurgen Klopp was unhappy with Liverpool's performance at Fulham, though seemed to caveat that with a gripe about the playing surface.

Leroy Sane spent four years in Manchester with City from 2016 and 2020 and could return to the red side of town.

Liverpool had to work hard for a draw at Fulham, while there were opening day wins for Tottenham, Bournemouth, Newcastle, Leeds and Chelsea.

Pep Guardiola is yet to win the Champions League with Manchester City, but says that will not influence any decision over his future.