Morata's luck just not in as Lewandowski frustrates La Roja

It was another mixed bag for Alvaro Morata, as Robert Lewandowski further dented Spain's Euro 2020 hopes in Seville.

It all seemed too perfect. Just moments after Robert Lewandowski had dragged Poland back into it at the other end, Alvaro Morata had the chance to once again prove his critics wrong.

But with the goal gaping, Morata was unable to convert, as Spain followed up a 0-0 stalemate with Sweden with a 1-1 draw against Poland, La Roja failing to win their first two group games of a European Championship since Euro 1996.

Yet it had all been going well for Morata, who opened the scoring in the 25th minute when he prodded in from Gerard Moreno's cross-shot, with VAR awarding the goal after the linesman's incorrect offside flag.

Morata had charged off to celebrate with Luis Enrique, who came to the defence of Spain's forward after Monday's frustrating draw with Sweden in their Group E opener.

4 - Álvaro Morata has scored four of Spain's last five goals at European Championship finals; indeed, only Fernando Torres (five) has ever scored more goals in the competition for the nation. Crucial. #EURO2020 pic.twitter.com/MAWNM6DUUf

He wasted Spain's best chance when he failed to beat Sweden goalkeeper Robin Olsen one-on-one – his attempt one of three the Juventus forward, who is on loan from Atletico Madrid, sent off target in that match.

But it was a Saturday night which ultimately, for both Morata and his Spain team-mates, ended in frustration once more in Seville.

It could easily have been very different. Lewandowski, who had squandered Poland's best chance of the first half when he struck straight at Unai Simon from point-blank range after Karol Swiderski had hit the post, making no mistake with what was just his second, and final, touch in the box within the width of the goal.

His goal keeps Poland's last-16 hopes alive in a group that remains wide open, though Spain should have been back ahead four minutes later.

Moreno was fouled by Jakub Moder, the offence spotted on a VAR check and referee Daniele Orsato pointing to the spot.

Unlike the composure he showed in the penalty shootout win over Manchester United in Villarreal's Europa League final triumph last month, Moreno missed the target, his low shot hitting the base of the left-hand upright. 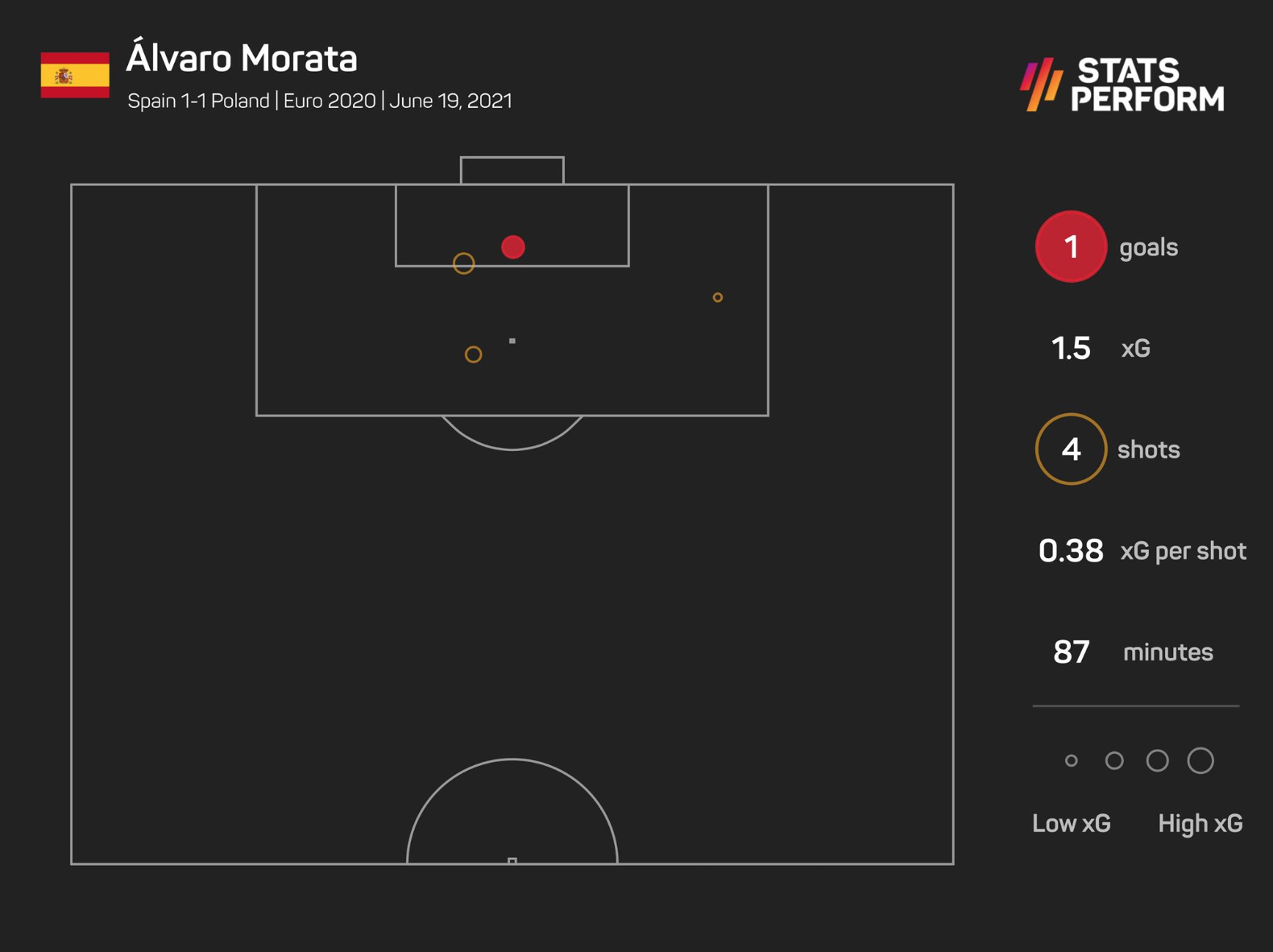 Yet there was Morata, charging in to meet the rebound, the goal wide open in front of him. The net should have been rippling. Instead, Morata was looking at the sky in anguish, his shot having sliced off his in-step and well wide.

Two more big opportunities followed for Morata, who finished with a game-high four attempts – three of them on target – but on neither occasion could he beat the final Poland block.

Only Fernando Torres (five) has scored more Euro goals than Morata (four) for their country, but when he trudged off in the 87th minute it was his miss which lingered in the Andalusian air as Poland held on for a hard-earned draw, and Spain must beat Slovakia next week to ensure they are not a group-stage casualty.

Bayern Munich striker Robert Lewandowski has won Germany’s Footballer of the Year award for a second time after a record-breaking season.

Rumour Has It: Chelsea eye Lewandowski, United close in on Varane

Robert Lewandowski is now Thomas Tuchel's top target for Chelsea as the Premier League side look to add a striker.

Emil Forsberg scored twice as Sweden secured top spot in their Euro 2020 group and a place in the knockout stages.

Sweden v Poland: Losing run against 'perfect' opponents of no concern to Sousa

Sweden have not thrilled the neutral at Euro 2020, but Poland coach Paulo Sousa considers them "perfect".

John Isner, Taylor Fritz, Benoit Paire and Nick Kyrgios were among the winners in the first round in Atlanta on Tuesday.

Tokyo Olympics: Soniia goes down fighting against world No. 6 Ratchanok

Soniia Cheah put on a fighting display on her Tokyo Olympics debut but came up short against Thailand’s Ratchanok Intanon who won 19-21, 21-18, 21-10 in a Group N decider.

Tokyo Olympics: Titmus and Ohashi double up as Ledecky hits the gold trail

It was another day to remember for Ariarne Titmus at the Tokyo Aquatics Centre, while Katie Ledecky also hit the top spot of the podium.

Tokyo Olympics: Titmus says her gold medal heroics yet to settle in

Malaysian archer Khairul Anuar Mohamad bagged shoot-off wins in his men's individual event at the 2020 Olympic Games on Wednesday to progress to the last 16.

Guardiola: City may have to play Community Shield with second team

Manchester City are without much of their first team for pre-season, leaving Pep Guardiola with limited options for the Community Shield.

Two golds on Tuesday means Japan continue leading the medal table in Tokyo, though China and the United States are in the hunt for top spot.

Simone Biles said she was "fighting demons" and doesn't trust herself as much after withdrawing from the team event on Tuesday.