The Champions League group stage reaches the halfway point this week and Tuesday provides another set of tasty fixtures.

Liverpool travel to Atletico Madrid seeking revenge two seasons on from their last-16 exit to Diego Simeone's side in the pick of the games.

Real Madrid and Manchester City are each looking to respond to defeats last time out when they take on Shakhtar Donetsk and Club Brugge respectively.

Here, Stats Perform takes a look at the key Opta data ahead of some key contests.

Following their last-16 exit to Atletico two seasons ago, Liverpool are winless in four Champions League meetings with the LaLiga champions – only Basel have they faced as many times without winning in Europe's top competition.

The Reds have also lost six of their past seven games on Spanish soil in the tournament since beating Real Madrid in the 2008-09 last 16, though they were victorious at the Wanda Metropolitano against Tottenham in the 2018-19 final.

Mohamed Salah opened the scoring in that meeting with Spurs and he has more recently scored in each of his past five away games for Liverpool in the Champions League – the longest-such streak by a Reds player in the competition. 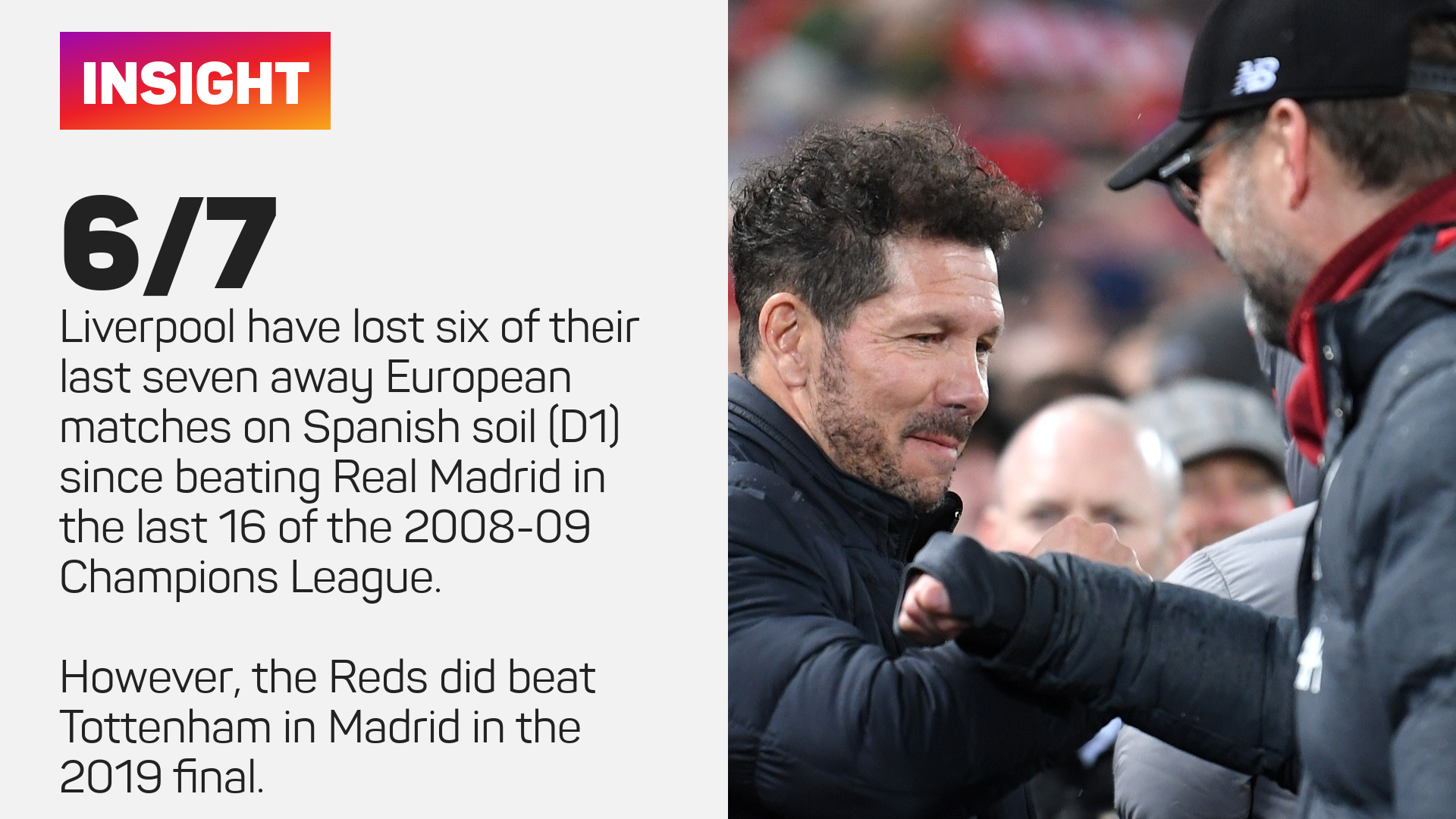 Shakhtar beat Madrid home and away in the group stage last season and could become just the third side to win three in a row against Los Blancos in the competition after Bayern Munich and Juventus.

While Madrid's recent record against the Ukrainian outfit is poor, head coach Carlo Ancelotti has won all four of his previous Champions League games against Shakhtar – only against Bayern (six) and Liverpool (five) has he won more often.

Prior to their shock defeat at the hands of Sheriff last time out, Madrid beat Inter 1-0 at San Siro in their opening Group D contest. However, not since 2014-15 have they won their opening two Champions League away games.

Paris Saint-Germain v RB Leipzig: History not on Germans' side

After netting in PSG's win against Manchester City three weeks ago, Messi is looking to join Neymar (2017), Alex (2012) and George Weah (1994) in scoring in his first two home games for the club in the competition.

PSG have a great record against German opponents, having won seven of their eight meetings with Bundesliga clubs on home soil, though the exception in that run was in April this year when Bayern won 1-0 at the Parc des Princes.

The Ligue 1 side do not tend to slip up at home in the group stage, losing just one of their past 28 such games – against Manchester United in October 2020 – and netting 2.7 goals per game on average. 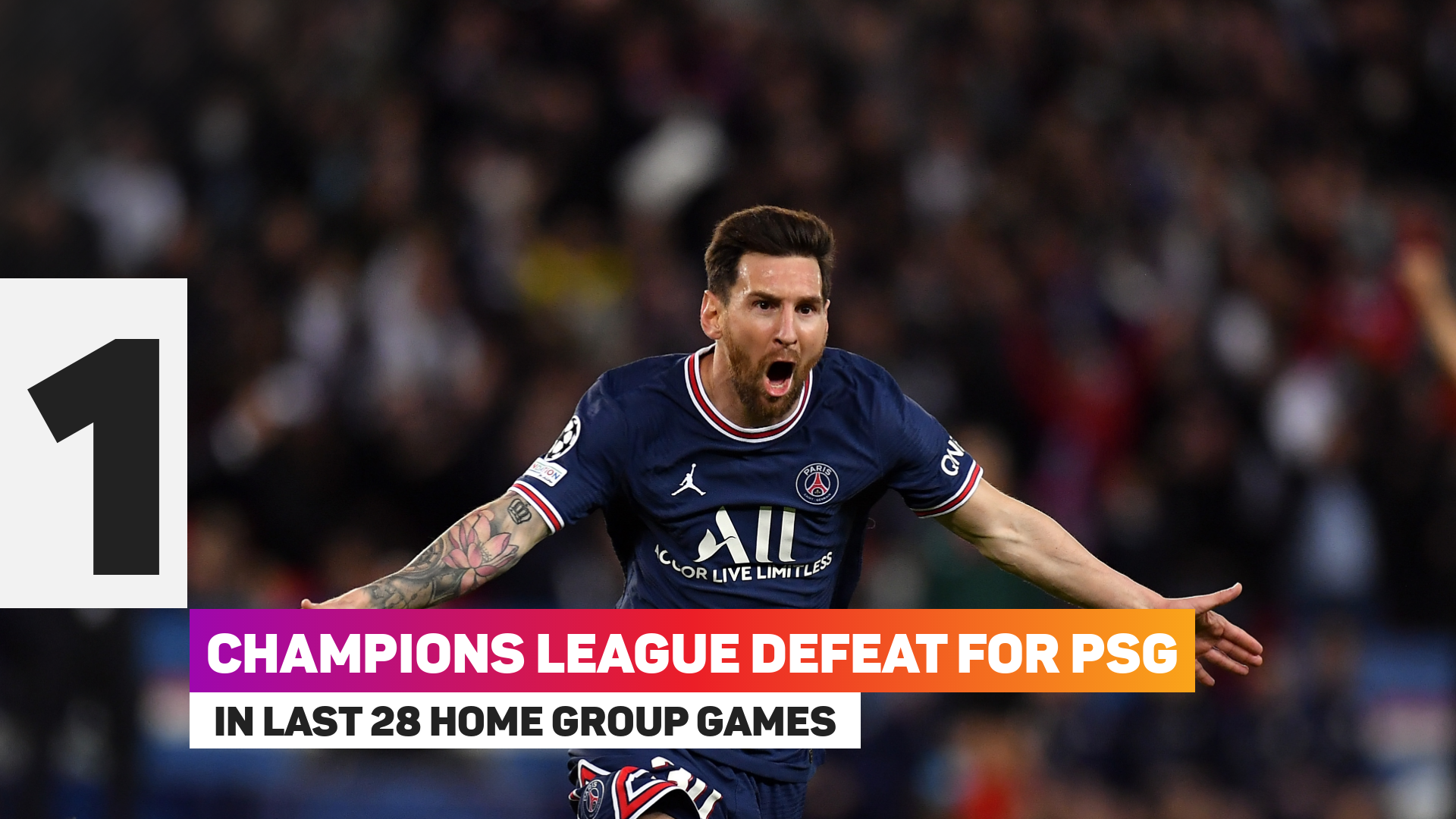 Ahead of this first ever meeting with City, Brugge are winless in 12 matches against English opponents in all European competitions since beating Chelsea in the Cup Winners' Cup 26 years ago.

The Belgian champions are unbeaten in their past four home group matches in the Champions League, though, picking up eight points across that run – only once have they gone five in a row without defeat (a run of six that ended in October 2019).

But Pep Guardiola will be confident of City getting their campaign back on track following defeat in Paris, the Catalan coach having lost successive away games in the competition once previously when in charge of Bayern in 2014-15 (against Porto and Barcelona).

2 - Dortmund have won their previous two major European matches in the Netherlands, both in the Champions League. Their last defeat on Dutch soil was in the 2002 UEFA Cup final against Feyenoord.

3 - Ajax are aiming to win their opening three games to a Champions League campaign for the first time since 1995-96 under Louis van Gaal, the season in which they last made it all the way to the final.

4 - Sporting have failed to win a European match on Turkish soil, drawing three times and losing once, with that loss coming against Istanbul Basaksehir in February 2020 in the Europa League. Besiktas, though, have won just once in 11 home Champions League games, beating RB Leipzig 2-0 in September 2017.

3 - Sporting lost their opening two group matches, against Dortmund and Ajax, and are at risk of losing three in a row for the first time in the current group-stage format.

6 - Porto have kept a clean sheet in six of their past seven games in the group stage of the Champions League, though they did concede five times in their last outing in the competition against Liverpool.

7 - Including qualifying matches, seven of Milan's eight away matches in UEFA competitions in Portugal have ended as a draw, with their only win coming against Porto in March 1993 courtesy of a Jean-Pierre Papin goal.

4 - Inter have failed to score in their previous three home Champions League games (the last two group games in 2020-21 and against Madrid this term). They have never previously gone four major UEFA European home games without scoring.

3 - Sheriff are looking to become just the third team this century to win their first three games in the Champions League, after Leicester City in 2016-17 and Malaga in 2012-13.

Real Madrid were second best against Athletic Bilbao but managed to secure maximum points, to the delight of boss Carlo Ancelotti.

Guardiola hails Silva as a class above after 150th win

Manchester City found a way past Steven Gerrard's Aston Villa as they remained in the hunt for top spot in the league.

Manchester City continued in pursuit of top spot in the Premier League with a win over Aston Villa, Bernardo Silva scoring a stunning goal.

PSG failed to score against Nice in Ligue 1 for the first time in 18 meetings on a frustrating day at Parc des Princes.

Karim Benzema scored the only goal of the game as Real Madrid secured a fifth straight LaLiga win with victory over Athletic Bilbao.

Roberto Mancini is contracted with Italy until 2026 but faces the World Cup qualification play-offs in March.

Thomas Muller has weighed in on the Ballon d'Or debate, suggesting club-mate Robert Lewandowski should have defeated Lionel Messi.

Jack Grealish made the tough choice to leave boyhood club Aston Villa for Manchester City but does not regret the decision.

Jack Grealish could return from injury to face Aston Villa for the first time since his record-breaking move to Manchester City.

Liverpool cruised past Everton on Wednesday to remain in the hunt for top spot in the Premier League as Mohamed Salah once again dominated.

Real Madrid were second best against Athletic Bilbao but managed to secure maximum points, to the delight of boss Carlo Ancelotti.

Ibrahimovic ready to re-sign with Milan: I'm having fun and feel young

Zlatan Ibrahimovic scored as Milan beat Genoa 3-0 and the 40-year-old revealed he wants to sign a contract extension.

Guardiola hails Silva as a class above after 150th win

Manchester City found a way past Steven Gerrard's Aston Villa as they remained in the hunt for top spot in the league.

''I have no comment!' – Salah laughs off finishing seventh in Ballon d'Or voting

Liverpool's Mohamed Salah scored twice against Everton before laughing off a question about finishing seventh in the Ballon d'Or voting.

Chelsea were far from their best during their win at Watford, with Thomas Tuchel admitting they were lucky to take all three points.

Manchester City continued in pursuit of top spot in the Premier League with a win over Aston Villa, Bernardo Silva scoring a stunning goal.

Liverpool remain hot on Manchester City and Chelsea's heels after earning a 4-1 win over Everton in Wednesday's Merseyside derby.