Memphis Depay dazzled and Antoine Griezmann was largely anonymous in an attacking sense, as Barcelona battled to victory over Getafe.

Ronald Koeman insisted Barcelona had other players who could step up and lead after Memphis Depay stood head and shoulders over the rest in Sunday's narrow win over Getafe.

Barcelona's 2-1 win in LaLiga came thanks to a second-minute strike from Sergi Roberto and a lovely run and finish from Netherlands forward Depay on the half-hour mark, the close-season arrival from Lyon already stamping his mark in Spain.

Between those goals, former Barcelona forward Sandro Ramirez briefly drew Getafe level, and the team who have yet to pick up a point this season pushed the hosts hard in the second half at Camp Nou.

Barcelona's seven points from three games look to be masking some serious shortcomings. Antoine Griezmann was mostly anonymous against Getafe and faced flak from the crowd, his display a blow to those that thought he might step up this season and assume the protagonist role previously vacated by Lionel Messi.

Koeman nonetheless looked for the positives, and said: "I don't like it when a Barca player is whistled. Someone who works like Antoine can never be criticised.

"All the attackers can have their day but there are games where you can't find the space. We haven't created opportunities for him either."

The France forward made more tackles than any other Barcelona player – five – but he did not have one shot or create a chance in his 84 minutes on the pitch. At the sharp end of the pitch, he was blunt.

Getafe have now played 17 away games against Barcelona in LaLiga without managing a win (W0 D4 L13). but Koeman praised the visitors.

"It was a difficult game. Getafe are a strong team," he said. 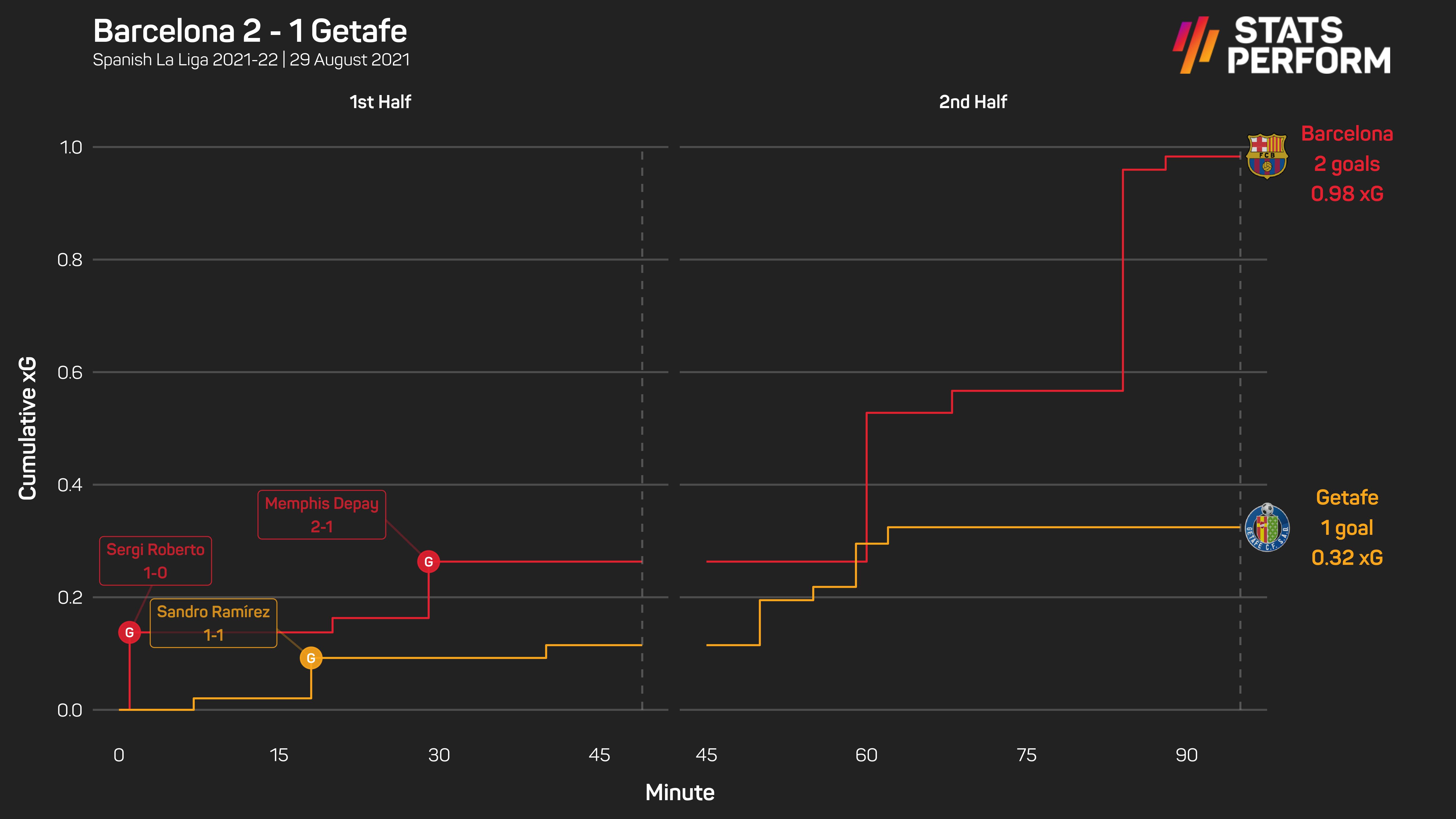 "We started very well. They equalised. We had control of the game but we didn't create many chances.

"I think that in the second half we lowered our performance with the ball. It should be noted, the work and the attitude we had to win the match. It was different from last year. Last year we drew games like today's. I'm very happy with the team."

Depay appears to have assumed the Messi role. His equaliser at Athletic Bilbao salvaged a point, and here his dribble and powerful finish coming in from the left side of the penalty was almost a mirror image of a typical Messi goal.

"I don't know if Memphis should lead," Koeman said. "There are more players to do it. We know that with him we have a player at the top who can make a difference. He did it today and also last week."

Barcelona could yet dip into the transfer market before Tuesday's deadline, but Koeman is not sure what the prospects are there.

He said: "Hopefully we can reinforce the squad because we need it, but if it is not possible, we will continue working as before."

That September 14 clash at Camp Nou will be preceded by countless reminders of the dark night at the Estadio da Luz, but Koeman will expect much better from Barcelona.

He wants them to make their home stadium, attended by 26,543 spectators on Sunday, as mighty a fortress as possible.

Without Messi, that seems a tall order, but Koeman has no choice but to set a high bar for his team.

"We have to win at home," Koeman said. "Last year we lost points here and this year we have two victories at home."

Emre Demir, the youngest player ever to score in the Super Lig, will link up with Barcelona B from the start of next season.

Barcelona president Laporta warns Koeman: If decisions have to be taken, we'll take them

Barcelona boss Ronald Koeman is under intense pressure and president Joan Laporta has not offered the Dutchman any long-term assurances.

Simeone wants Griezmann patience: This Atletico side is different to the one he left

Antoine Griezmann is yet to score in four games since his return to Atletico Madrid, while Luis Suarez ended his lean run with a double.