Real Madrid will need another exceptional performance to defeat Atletico Madrid. Can Zinedine Zidane get their season firmly on track?

Zinedine Zidane said Real Madrid played their most complete game of the season against Borussia Monchengladbach – and one that probably saved his job.

Madrid's 2-0 victory secured their progress from a Champions League group for the 29th time in a row and most likely earned their coach a stay of execution from president Florentino Perez.

Zidane agreed afterwards his team have a knack for producing when it matters in big games, and he will need them to deliver again on Saturday.

Los Blancos host Atletico Madrid in the derby knowing victory will end their city rivals' unbeaten start to the LaLiga season and cut the gap to the leaders to three points.

Atleti have not beaten Madrid in eight league meetings, but Zidane's men have only won one of the previous seven at home. They will need another huge performance if that is to change. 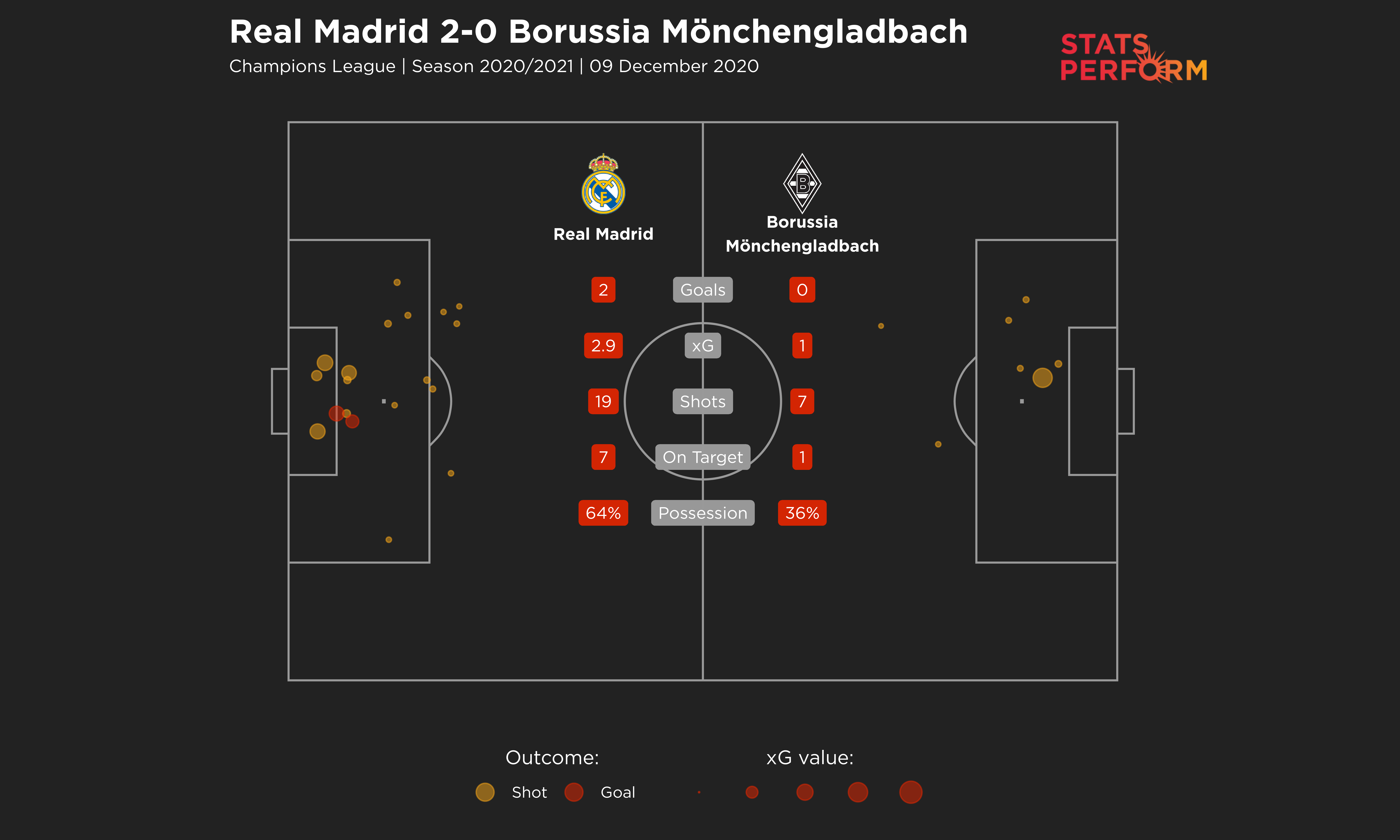 Madrid produced their best performance of 2020-21 against Gladbach. They might have managed less possession (64 per cent compared to 66) and fewer shots (19 compared to 22) than they did in the away fixture, but 2-0 actually flattered the visitors, for whom Yann Sommer made five excellent saves and who were rescued three times by the woodwork.

Part of Zidane's praise was down to their level of control. Madrid only faced seven shots and, excluding hoofed clearances, lost possession 113 times, 17 times fewer than they did in their 2-2 draw in Germany, when they snatched a point with two goals from the 87th minute onwards.

Their best league game of the season, a 3-1 win at Barcelona, showed similar levels of authority. That day, they hit the target with nine of their 15 shots and created 12 chances – they have only created more once this term (15 against Real Sociedad).

And, while they had only 48 per cent possession, Madrid lost the ball (again, excluding hoofs) just 104 times – their lowest figure in a league match this term – and attempted 22 tackles, their most in a game in 2020-21.

They will need something extra against Atletico, though: ruthlessness in front of goal. 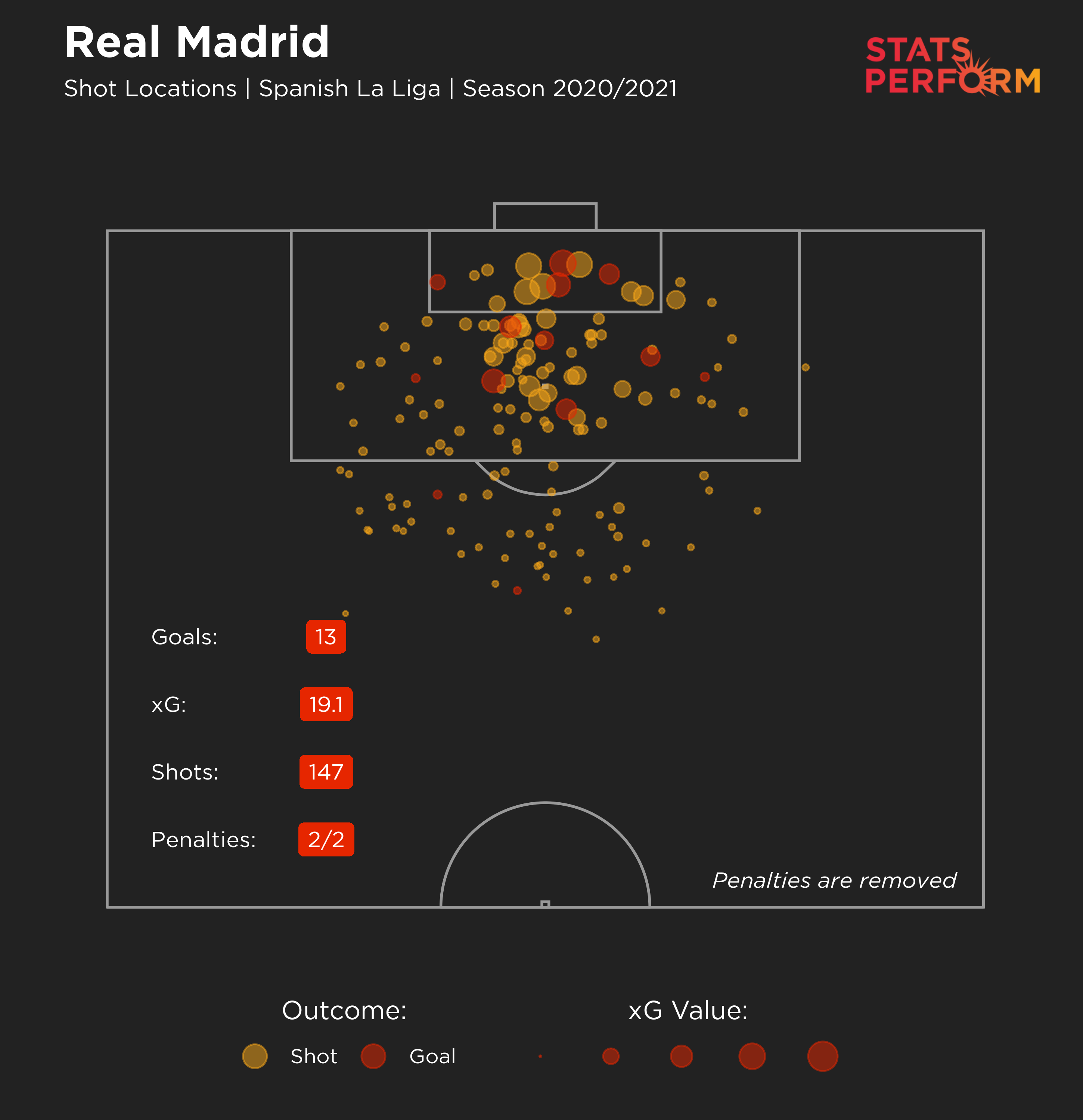 Excluding penalties and own goals, Madrid have scored 13 times in the league this season, but, based on Expected Goals (xG), they should have a further six goals. That is profligacy they cannot afford against Atletico.

Not only have Atleti avoided defeat in every game this season bar a trip to European champions Bayern Munich, they have only conceded twice in LaLiga in 10 matches. That is the best defensive record of any team in Europe's top-five leagues and equals the best goals-against tally at this stage of a season in Spain, matching Deportivo La Coruna in 1993-94.

However, Atleti's Expected Goals Against (xGA) for 2020-21 is actually nine; their differential of seven is the highest of any team. That shows you the imperiousness of goalkeeper Jan Oblak.

The Slovenia international has kept eight clean sheets in 10 league outings, saving 32 of the 34 shots he has faced. That remarkable 94 per cent save rate is, unsurprisingly, the highest in LaLiga. Based on xG from shots on target faced (xGOT), Oblak should have conceded seven goals this term; the five he has prevented puts him, again, at the top of LaLiga.

It will certainly help Madrid and Zidane's cause if Karim Benzema can replicate his performance against Gladbach.

The striker has scored four goals from 30 shots in LaLiga, with his xG rating at 5.6, suggesting he has somewhat underperformed in front of goal domestically. However, against Gladbach, Benzema was far more lethal: he scored from two of his seven shots (four were on target and two blocked), misplaced just three of 58 attempted passes and created five chances for team-mates.

It was exactly the kind of showing Zidane would hope has boosted a player who has only scored once in 10 home league games against Atleti, his lowest tally against an opponent he has faced at least seven times. 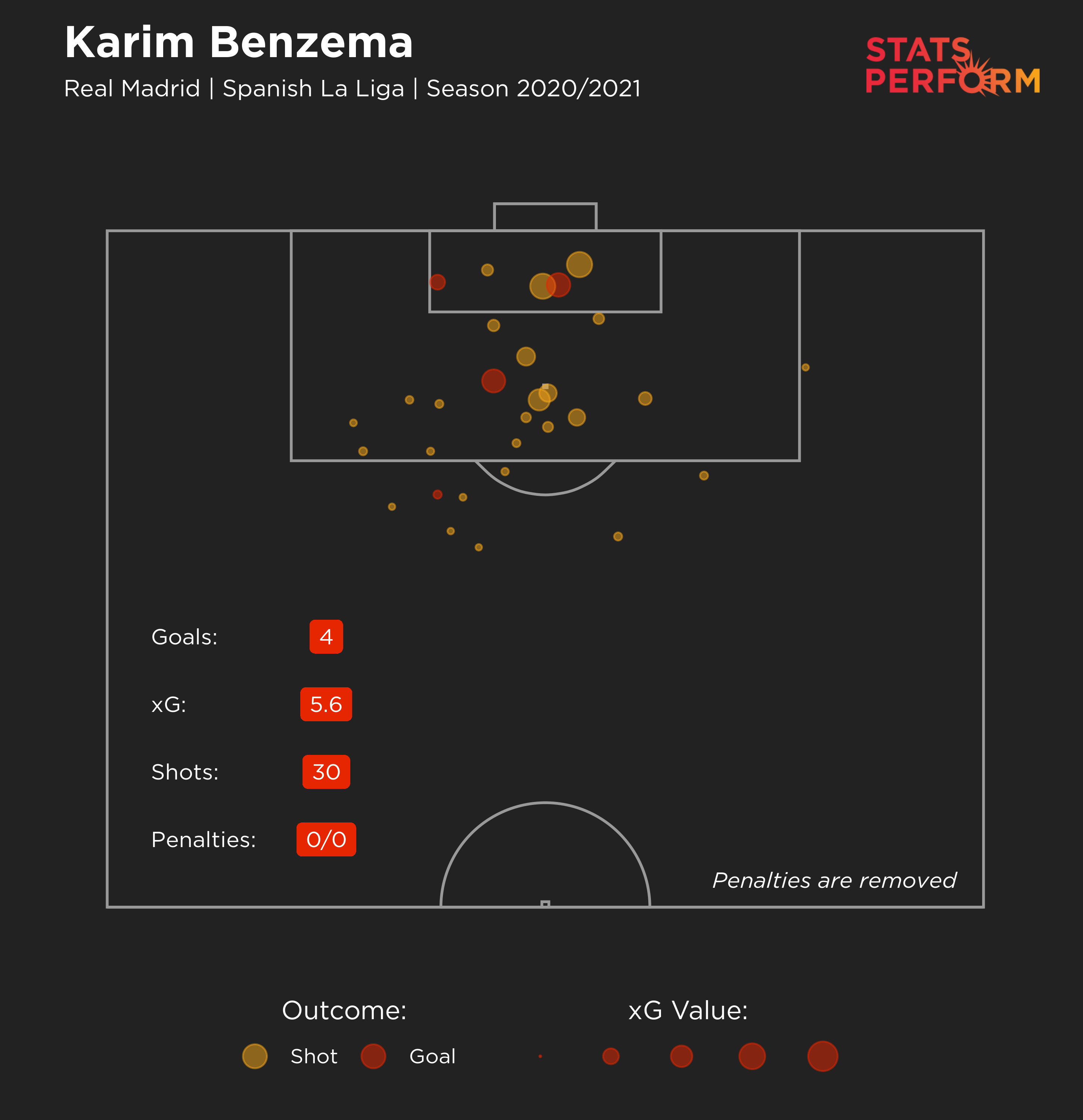 Madrid have grown accustomed to Atleti adopting a low block and swift counter-attack, but Diego Simeone has his side playing a little differently in 2020-21.

With Koke back in form, Joao Felix growing in stature and Luis Suarez leading the attack, Atleti are far more adept at patient attacking play. Look at build-up attacks, which measures open-play sequences containing 10 or more passes that end either in a shot or a touch in the opposition box: Atleti have registered 37, lower only than Madrid and Barca this term.

Still, reverting a little more to type could well prove key. Madrid have faced 25 direct attacks this term, the highest in LaLiga (a direct attack is an open-play sequence starting just inside the team's own half, has at least 50 per cent of movement towards the opponents' goal and ends in a shot or touch in their box). They also have the second-worst record in terms of progress against (14.95 metres) – in other words, teams cover more distance upfield per sequence against Madrid than they do against any other side except Cadiz (17.5 metres).

Control, clinical finishing and great care without the ball will all be required if Madrid are to claim another significant win and boost Zidane's long-term prospects a little more.

200 - Diego Simeone has recorded his 200th win in his 330th game for Atlético de Madrid in LaLiga, becoming the second manager to reach this milestone for the same club in the competition’s history, after Miguel Muñoz for Real Madrid (257). Cholo. pic.twitter.com/8A1T4rYJlx

Marcos Llorente has played in all 11 of Atletico Madrid's matches this season but may miss Sunday's clash with LaLiga leaders Real Sociedad.

Alisson heaped praise on Liverpool team-mate Mohamed Salah, who delivered for the Reds again on Tuesday.

Carlo Ancelotti was full of praise for Real Madrid and two-goal Vinicius Junior following their 5-0 win over Shakhtar Donetsk.

Atletico Madrid managed to draw level against Liverpool before late drama saw them concede a penalty and have their own overturned.

Diego Simeone rejected Jurgen Klopp's offer of a handshake after Liverpool's win over Atletico Madrid, which the German was not happy with.

Vinicius Junior scored a wonderful individual goal as Real Madrid cruised to a commanding win over Shakhtar Donetsk in the Champions League.

Rumour Has It: Barca want Isak as alternative to Haaland

Barcelona are reportedly targeting Alexander Isak if they are unable to prise Erling Haaland to Camp Nou.

UAE to hold Club World Cup in 2022 after Japan withdrawal

The next Club World Cup was scheduled to take place in Japan but has subsequently been moved to the United Arab Emirates in 2022.

Leicester City striker Patson Daka scored four goals as the Foxes came back from behind to beat Spartak Moscow in Russia.

Pele required surgery to remove a tumour in September and has provided another update on his recovery in Brazil.

Anthony Joshua will meet Oleksandr Usyk again in 2022 after losing to the Ukrainian, but he could do so with a different trainer on board.

Newcastle United's game with Tottenham was halted due to a medical emergency in the stands, but the fan in question is on the mend.

Bruce after Newcastle exit: It was tough to be called an inept cabbage head!

After his departure from Newcastle, Steve Bruce reflected on the abuse he had received in the role, including being called a "cabbage head".

Denmark Open: Zii Jia overcomes near scare to reach next round

Lee Zii Jia needed to dig deep into his reserves before overcoming Chinese Taipei’s Wang Tzu Wei 12-21, 21-9, 21-18 in a 50-minute contest in the first round of the Denmark Open.

Pohang Steelers will face Al Hilal in the AFC Champions League final after a dramatic penalty shootout win on Wednesday.

The United States Grand Prix has traditionally been a good race for Mercedes, as Lewis Hamilton looks to hit back this weekend.

World number one Novak Djokovic will not be able to play in the Australian Open unless he has had two COVID-19 vaccination shots.