Messi tearful after eclipsing Pele record: 'I've dreamed of this for a long time'

A hat-trick against Bolivia ensured Lionel Messi broke Pele's goalscoring record for a CONMEBOL nation, and he was understandably emotional.

Lionel Messi was overcome with emotion as he fulfilled a "dream" by eclipsing Brazil great Pele as the all-time leading scorer for a South American nation.

Messi scored a hat-trick as Argentina cruised to a 3-0 victory over Bolivia in Thursday's CONMEBOL World Cup qualifier and those goals took him past Pele.

His first, a curling effort after a cheeky nutmeg, saw him go level with Pele on 77, before a close-range finish just past the hour saw him set a new record.

He then added another for good measure at the end to complete his hat-trick and reach 79 goals for Argentina on a momentous night at the Monumental.

With La Albiceleste also finally able to celebrate July's Copa America triumph – a first in 28 years – in front of their own supporters at full-time, record-breaker Messi failed to hold back the tears.

"I have dreamed of this for a long time and I thank God it was given to me," he said on the pitch afterwards. 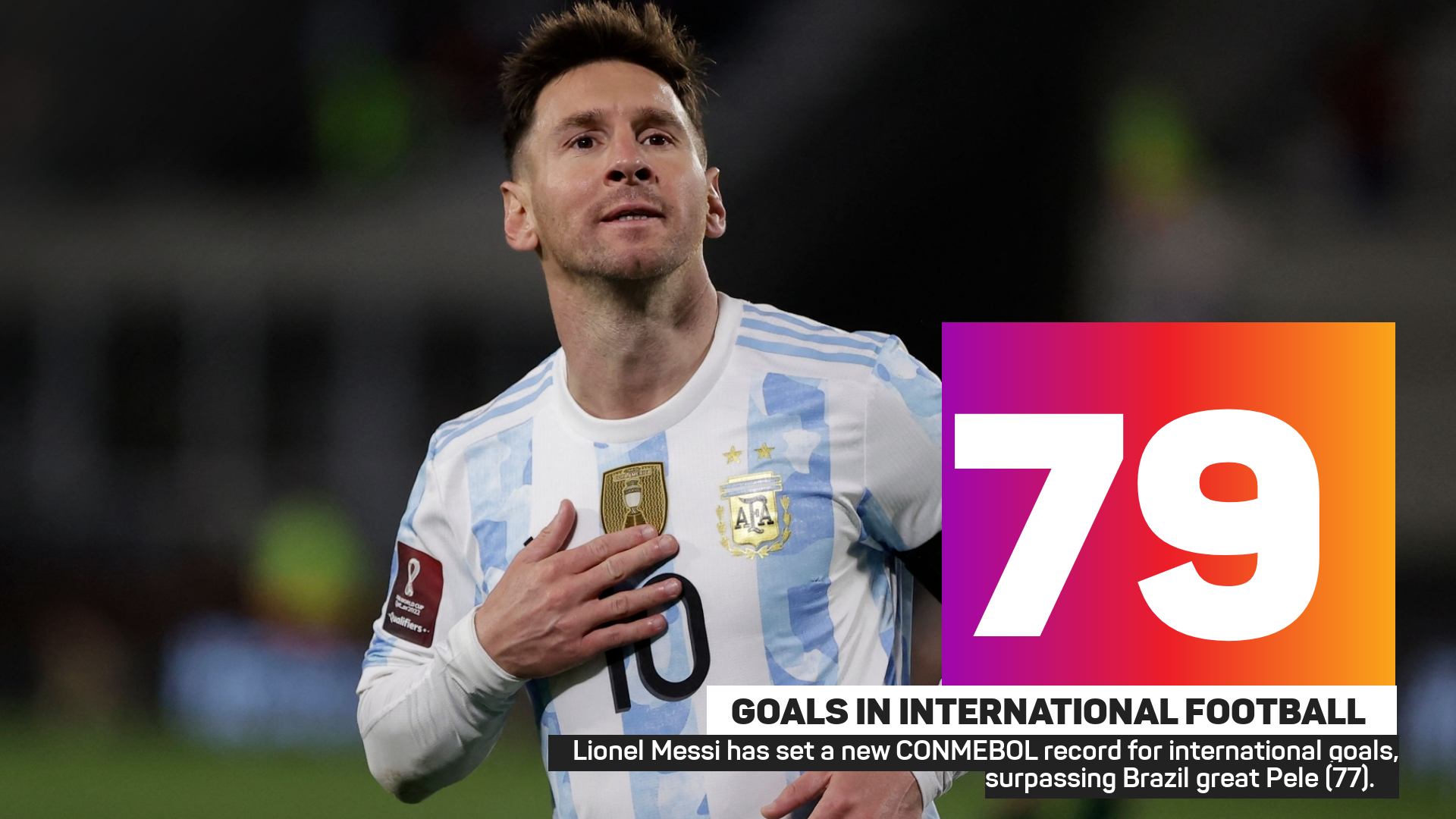 "It is a unique moment because of how it happened and after so much waiting.

"There was no better way for it to be and to be able to be here, celebrating, is something incredible.

"My mother and my brothers are up there, they suffered a lot too. I'm very happy."

It was Messi's seventh hat-trick for his country, but his first on home soil and ensured Argentina extended their unbeaten run to 22 matches, a streak that began in 2019.

It was further proof that Argentina are building themselves back up to a standard many associate with the two-time World Cup winners after a poor showing at Russia 2018, a tournament that essentially led to a reset.

Messi's international future at the time was in doubt as he took an extended break from international football – back then, many would have suggested Pele's record looked set to outlast Argentina's talisman.

"I cannot do more than be so happy, for my family who is watching me and for all Argentines," Messi continued.

"I always say individual awards are secondary, because we are here for something else, but the truth is I am very excited."

A Premier League footballer has been arrested after a woman in her twenties reported an allegation of rape to the police.

Duncan Ferguson, who has had two caretaker spells in charge of Everton, has left the Premier League club.

Jules Kounde has been linked with Barcelona and Chelsea, but Sevilla say they have received no offers for him yet.

Following a successful trial run involving the likes of Manchester United and Chelsea, safe standing is to be rolled out in more grounds.

Andreas Christensen has joined Barcelona after his contract with Chelsea expired.

A few days after becoming a free agent, Wolves midfielder Joao Moutinho has signed a new contract with the club.

Wimbledon: 'For the moment I am healthy enough to keep going' – Nadal looks forward to quarter-final

Rafael Nadal was bombarded with questions about his injuries after he reached the quarter-final in his return to Wimbledon.

Wimbledon: 'I've come a long way, that's for sure' – Kyrgios feels he is a changed man

Nick Kyrgios admitted he was dragged out of the pub at 4am before his 2019 clash with Rafael Nadal at Wimbledon, but said he has changed.

Wimbledon: 'I don't moan, I love it!' – Kyrgios revels in controversy and laughs off criticism

Nick Kyrgios is one of the stories of this year's Wimbledon, but the Australian says he loves to cause contention.

Rafael Nadal and Simona Halep were among the Wimbledon champions to celebrate the 100th anniversary of the Centre Court opening.