Juventus confirmed the arrival of Manuel Locatelli on Wednesday and the Italy international cannot wait to get going at his new club.

Manuel Locatelli has described his move to Juventus as a "dream come true" and has thanked Sassuolo for giving him a platform to showcase his talents.

The 23-year-old, one of the stars of Italy's successful Euro 2020 campaign, completed a switch to the Allianz Stadium on Wednesday in a deal worth €25million plus add-ons.

Following weeks of speculation linking him with a switch to the Turin giants, as well as other European clubs, Locatelli put pen to paper on a two-year loan with an obligation to buy.

"It's a dream come true," he told Juventus TV after finalising the transfer. "It is the dream of a child who worked so hard, that has given everything on the pitch.

"I arrive at Juve with the desire to take to the field for the fans and can't wait to get onto the pitch at the stadium. That's just the start!"

Locatelli featured five times for Italy at the European Championship finals, including an appearance from the bench in their penalty shoot-out win against England in last month's final.

He scored twice in the group-stage win over Switzerland and had the second-best goals-per-90-minutes ratio of any Italy player (0.66) after Matteo Pessina, who netted twice in four games (0.95).

Milan youth product Locatelli also won more tackles per 90 minutes (2.32) at the Euros than any other Italy player, followed by Marco Verratti (2.02) and Federico Bernardeschi (1.42). 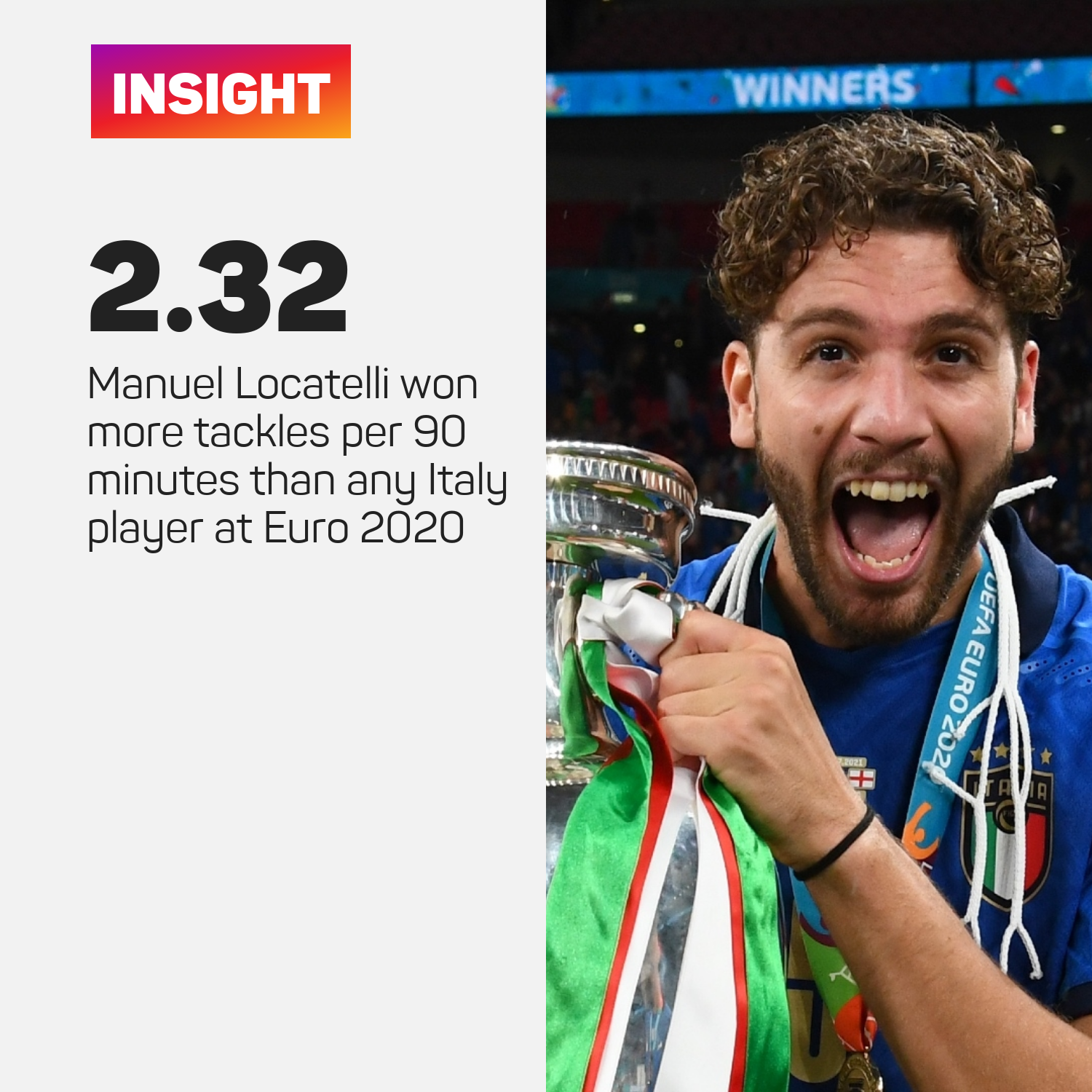 Locatelli's impressive Euros showing came on the back of a solid campaign at club level for Sassuolo, having played the second-most successful passes of any player in Serie A last season (2,426), behind only team-mate Gian Marco Ferrari (2,483).

After spending three seasons at the Mapei Stadium, the first of those on loan, Locatelli paid an emotional tribute to his now-former club.

"What to say. The tears I had yesterday when saying goodbye to the squad are proof you are in my heart," he posted on Instagram. "You always will be, because you made me become a better person and player.

"Life is made of choices and it was the right time to say goodbye after you accompanied me on this wonderful journey.  It has not been easy, you know that, but once you overcome the difficulties, the result is extraordinary.

"You are my family, you took me to winning the Euros. I will always love you. Thank you from the depths of my heart to the Squinzi family, who showed belief in me.

"Thank you to all the team-mates who, between a telling-off and a speech, made me a man. Thank you to director [Giovanni] Carnevali, Giovanni Rossi and coach [Roberto] De Zerbi, for whom I will always feel something special.

"Thank you to all from Fofo to every person who works in this oasis of joy. I love you all so much. Arrivederci, Sassuolo."