France are below Denmark, Croatia and Austria in their Nations League group, but Didier Deschamps is trying to stay positive.

Didier Deschamps and Kylian Mbappe both insisted they are not worried despite France falling to the bottom of their Nations League group with a 1-1 draw in Austria.

Les Blues followed up their shock 2-1 home loss to Denmark and 1-1 draw against Croatia with another underwhelming display at Ernst Happel Stadion on Friday.

Substitute Mbappe scored seven minutes from time to cancel out Andreas Weimann's first-half opener, but France had to settle for another draw on their travels.

France are four points adrift of Group A1 leaders Denmark with three games to play and only one finals spot up for grabs, while Austria and Croatia are two points better off.

But despite their hopes of retaining the title they won in October with victory against Spain looking slim, Deschamps is trying his best to remain upbeat.

"I'm not worried. It is not the result we hoped for, and we are not at the top of our form or fitness, but we have given playing time to some younger players," he told TF1.

"We had so many chances in the second half. We controlled the game but were not efficient enough." 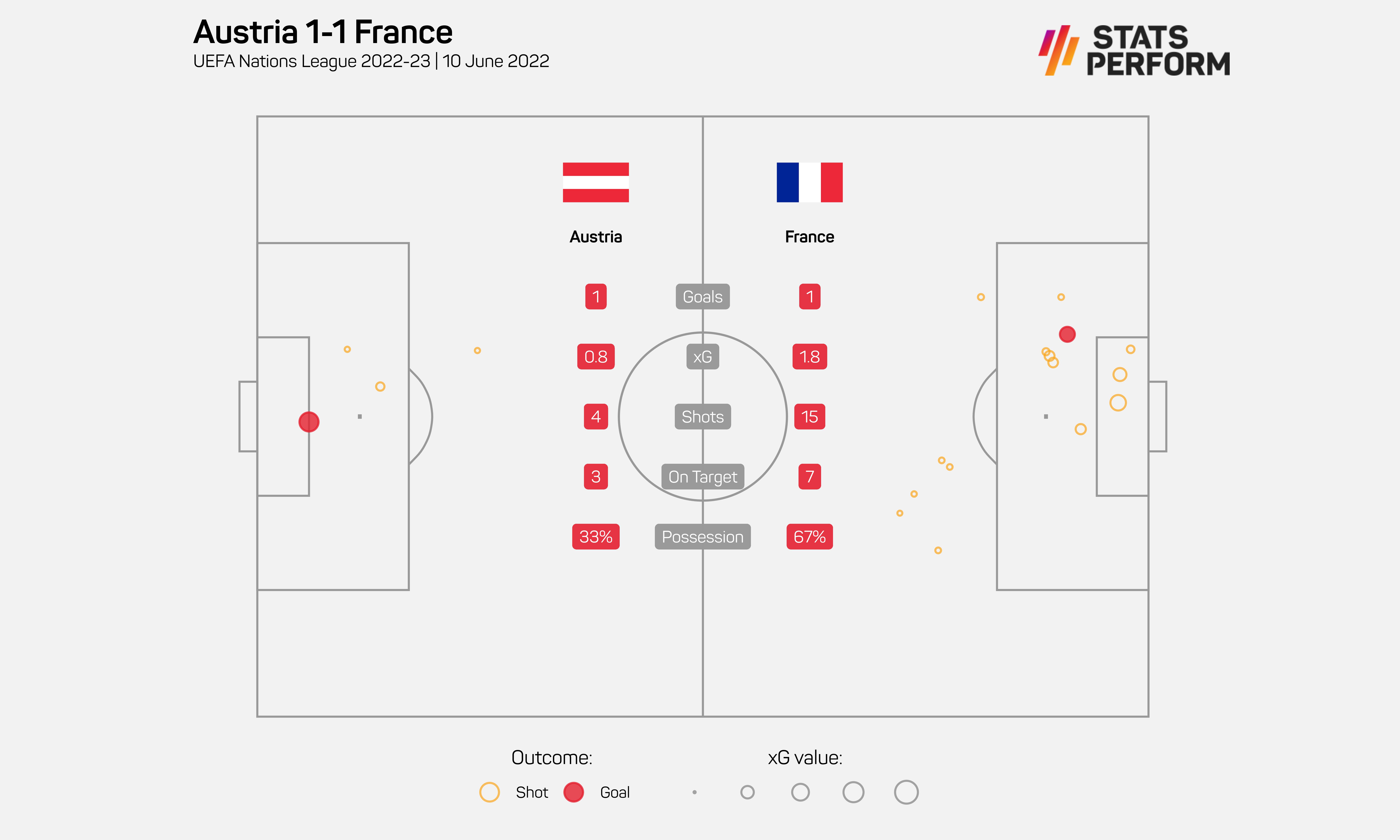 France have now conceded in 10 of their past 15 matches and would have been facing a second defeat in the space of three games if not for the impact of Mbappe.

The Paris Saint-German star, returning from a knee injury that kept him out of the Croatia game, has been involved in five goals in his past five France games as a substitute.

He scored from one of his two attempts, with the other forcing Patrick Pentz into a great save in the 87th minute to help the ball onto the frame of the goal.

Reflecting on another disappointing day for France in the June window, Mbappe said: "You should never be worried; always stay proud.

"We will take this point and work to beat Croatia on Monday. It's a shame I hit the bar. We now have to keep the momentum from the final few minutes here.

"I'm personally not at 100 per cent [fitness wise] but if the coach needs me then, with the holidays nearly here, I can push myself again."

France have now avoided defeat in the past 10 matches in which they have conceded the opening goal, winning four of those and drawing six.

The 2018 World Cup winners round off their 2021-22 campaign at home to Croatia in what is now effectively a must-win game, before facing Austria and Denmark in September.

"Today was difficult for us, but the quality was there," Deschamps added. "With a lot of changes between matches, we've not had much rhythm.

"But from what we did today, in terms of the chances created, the players should have been rewarded with a better result."