Massimiliano Allegri is embarking on a second spell in charge of Juventus this season and Giorgio Chiellini is pleased with the appointment.

Giorgio Chiellini is convinced Massimiliano Allegri is the right man to reclaim the Scudetto for Juventus following the failed Andrea Pirlo experiment.

Celebrated former midfielder Pirlo failed to guide the Bianconeri to a 10th successive Serie A title last season and was sacked in May, before the halfway point of a two-year deal.

Allegri was named as Pirlo's successor on the same day for a second spell in charge, having previously guided Juve to five league titles, four Coppas Italia and two Champions League finals.

Juve amassed 142 wins in their 190 league games under Allegri – only Giovanni Trapattoni has overseen more matches – giving him a win percentage of 74.74, clear of second-placed Antonio Conte (72.81), who managed 83 triumphs from 114 matches.

During his five seasons with Juve, Allegri suffered just 20 league defeats, with his team scoring 380 goals and conceding 125 in return, averaging 2.39 points per game.

Allegri is responsible for three of the seven Juventus seasons during which they have netted 100 goals or more, meanwhile, alongside Pirlo, Conte and Jesse Carver.

Chiellini was a part of that successful period at the club and will likely play a key role in this latest new era for Juventus after penning a two-year contract extension on Monday.

Allegri's immediate aim is to win back the title from Inter, while also seeing off competition from the likes of Milan and Atalanta, and experienced centre-back Chiellini is ready to do his bit.

"I am happy to see him again," Chiellini told Juventus TV. "He gave me and everyone a great deal.

"I've kept in contact with the lads, and they've told me he's really fired up for the start of the season. I'm convinced he is the right man to take this team back to the top and create a new cycle.

"I am here to give my contribution, above all on the field, but off it too." 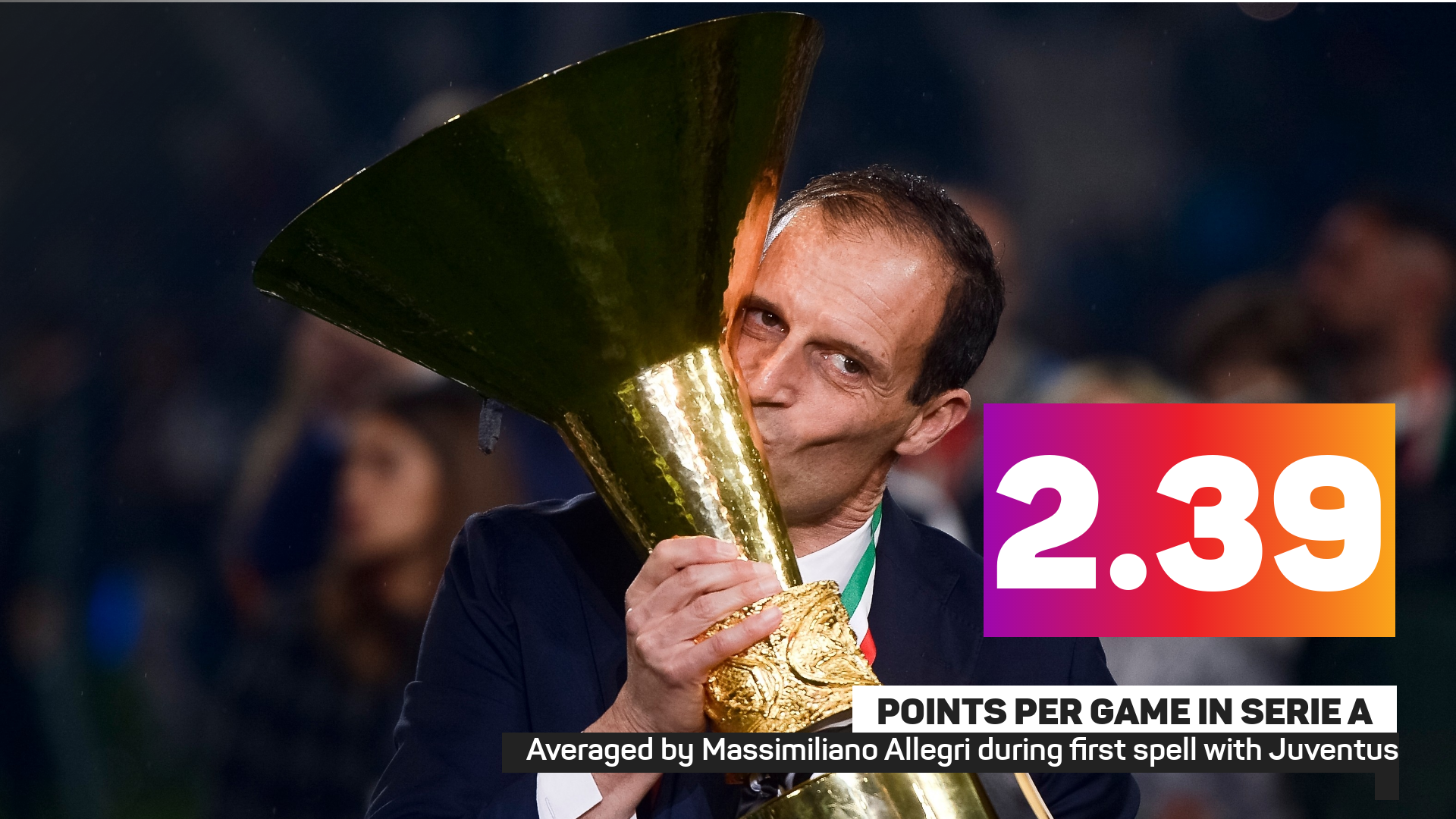 Chiellini has made 535 appearances for Juventus since joining in 2004 but has played just 21 times in Serie A since the start of 2019-20, partly due to injury.

He showed his quality at Euro 2020 as he helped Italy to their first continental crown in 53 years, starting five of the Azzurri's seven matches in the tournament.

The Livorno product produced six clearances, which was four more than any other Italy player, while also leading the way for interceptions (three) and aerial duels (seven).

After putting an end to potential retirement talk by putting pen to paper with Juve, Chiellini is now eyeing up a place in Italy's World Cup squad for Qatar 2022.

"The World Cup is just over a year away, so we'll see," he said. "I always want to enjoy every moment and to think of the present.

"I've learned over the last few years that the only secret is to live in the moment and without thinking of faraway objectives.

"Now we need to get the engine going again after these few weeks when I needed time to recover, then we'll take it one week at a time, game by game, and see where we end up."

Mauricio Pochettino's side made it eight wins from eight as they moved further clear at the top of the Ligue 1 table.

Gabriel Jesus helped Manchester City to a big win over title rivals Chelsea, while Manchester United slipped up at home.

Carlo Ancelotti saw his Real Madrid side frustrated by Villarreal in what was his 800th game as a coach on Saturday.

Jurgen Klopp expected the net to bulge when Mohamed Salah lined up a late chance, and the miss proved costly for Liverpool at Brentford.

Inzaghi: My decision for Dimarco to take penalty

Federico Dimarco could have secured all three points for Inter against Atalanta with his first Serie A penalty, but missed from the spot.

Ole Gunnar Solskjaer felt Aston Villa's winner against Manchester United should have been ruled out, but David de Gea was less incensed.