England were dismal in the Ashes, but Paul Collingwood is grateful to Ben Stokes for leading his side's response in the Caribbean.

Joe Root's tourists were thoroughly outplayed against their old foes Australia, succumbing to a 4-0 series defeat Down Under that saw Chris Silverwood dismissed in the wake of the hammering.

Collingwood was placed in temporary charge to lead a new-look England side, without James Anderson or Stuart Broad, to the Caribbean for a three-Test series against West Indies.

England remain in search of their first win under Collingwood – and in eight Tests overall – but have produced encouraging performances in consecutive draws in Antigua and Barbados.

Stokes, who bemoaned his fitness levels after averaging 23.6 with the bat and 71.5 with the ball in Australia, has been integral to the visitors' spirited showings against Kraigg Brathwaite's side.

Indeed, no seamer has sent down more overs in the series than Stokes (77) for his five wickets and economy of just 1.81. He also registered his first century since July 2020 with a brisk 120 in the second Test.

Collingwood was keen to credit superstar all-rounder Stokes for aiding Root and the rest of the England side in recovering from a familiar Ashes fate as they eye a winner-takes-all decider in Grenada, which starts on Thursday. 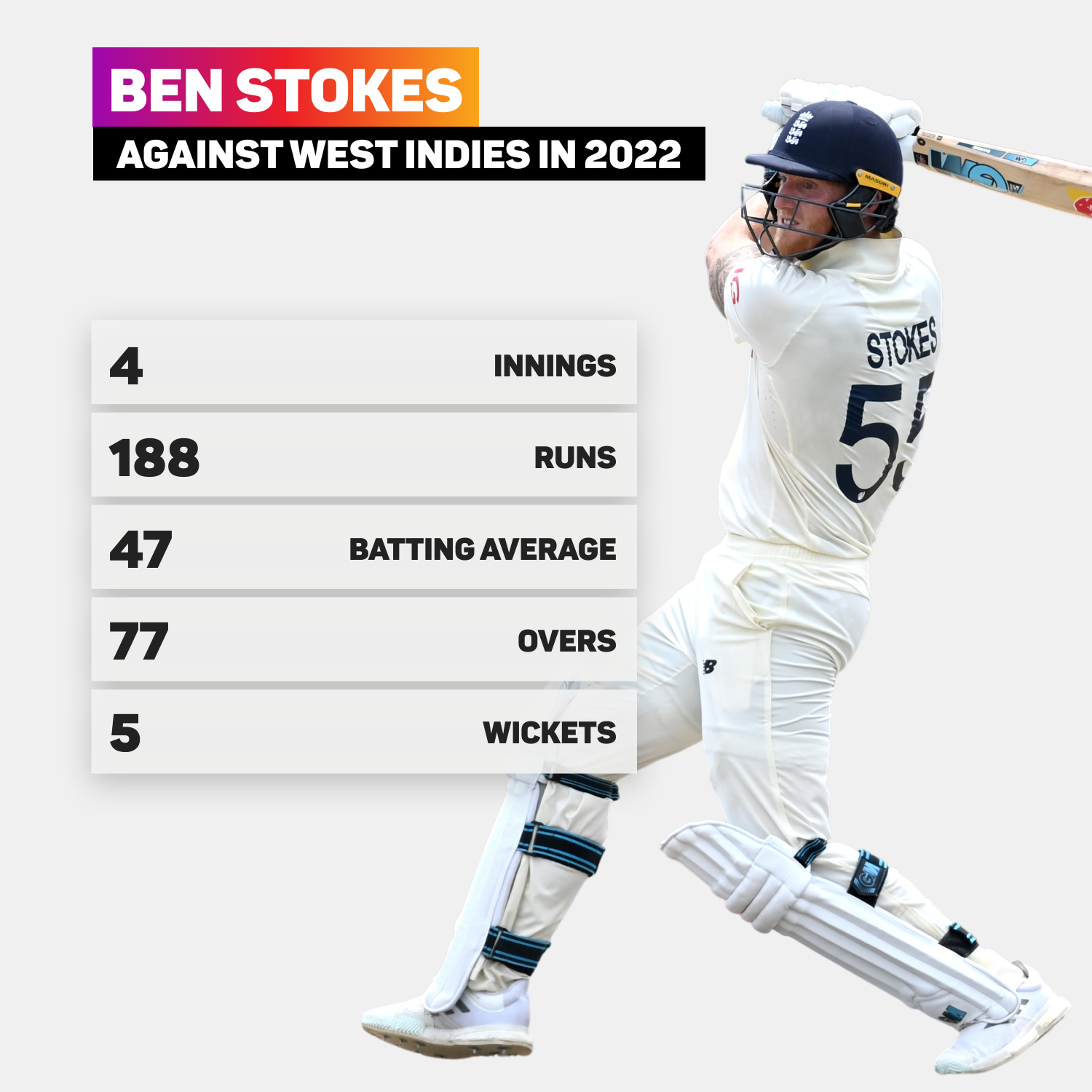 "He was going into the Ashes with not much cricket under his belt. Now he's fit, he's determined, and you can tell he wants to make a difference in the dressing room as a leader.

"When he's preparing himself like he is at the moment, he certainly leads. He wants to go out in the middle and put in big performances. He wants the ball in hand, to score the runs, and he's doing just that at the moment.

"Even in the meetings when we first arrived, getting the scar tissue from Australia out the way and [discussing] how we were going to move forward, you could see and hear he had the bit between his teeth and wants to lead this team. I think he and Joe Root have done a magnificent job turning this round.

"He's just desperate to do well for the badge, for England. It's amazing when he's got this kind of attitude, as we all know he's one of the best. Long may it continue."

With a fully fit Stokes partnering the in-form Root, Jonny Bairstow and England's refreshed top order, Collingwood finds it hard to fault the efforts of his team so far.

"They want to put on a show, get a win under their belts, and we have a great attitude at the moment," he added.

"All the way through the [second] Test match, we were pushing for the win. It always felt as though we were a session or session and a half behind the game with the pace Brathwaite batted in the first innings, but he showed great resilience right the way through the Test match to get a draw for them.

"It's been hard work, but you cannot fault the effort. If you could measure attitude and effort, it couldn't get any better than that."

Thanks, Barbados
Grenada, we're on our way

The only criticism of England against West Indies so far has been their failure to take 20 wickets in a Test, albeit on two placid pitches, leading to calls for the inclusion of leg-spinner Matt Parkinson, who Collingwood feels will be ready whenever called upon.

"He is ready as can be," Collingwood said.

India secured an unassailable 3-1 series lead against the West Indies with a routine victory in the fourth T20I in Florida.

The governing body has filled the void left behind by Ian Watmore, with the Surrey supremo stepping into the top job.

Michael Hooper decided not to play against Argentina on Saturday, as the Australia captain is not in the right frame of mind.

Having set Ireland a target of 183, South Africa made light work of their opponents' chase in the second T20I at Bristol.

The Rugby Championship: The Breakdown – Springboks preparing to pounce on struggling All Blacks

New Zealand are in a crisis by their standards, and things do not get any easier as they start the Rugby Championship in South Africa.

They might have a combined age of 98, but Real Madrid's midfield trio dominated against Eintracht Frankfurt in the Super Cup.

Ancelotti has 'no doubt' that Benzema is world's best

Karim Benzema led Real Madrid to a fifth Super Cup success in Helsinki, and Carlo Ancelotti has "no doubt" he is the world's best player.

Ancelotti has the 'desire of a child' to keep winning – Casemiro

Casemiro is confident Carlo Ancelotti's hunger for trophies will not slow down after Real Madrid sealed the Super Cup.