After losing eight wickets in a session, England were swiftly dispatched by Australia, who required just 20 runs to win the first Test.

England fell to pieces in a day-four Ashes collapse as Australia ruthlessly wrapped up the opening Test by nine wickets behind Nathan Lyon's historic performance.

Australia celebrated a comprehensive victory at the Gabba, where England lost eight wickets in the morning session to set the hosts just 20 runs to win, which they scored post-lunch with the loss one wicket.

Lyon had become only the third Australian bowler to reach 400 wickets as England capitulated all out for 297 in Brisbane on Saturday – the spinner leading his nation's charge with 4-91.

England emerged on the fourth day with renewed hope after Joe Root and Dawid Malan mounted a fine rear-guard on Friday – the pair's stance leading the tourists to 220-2. 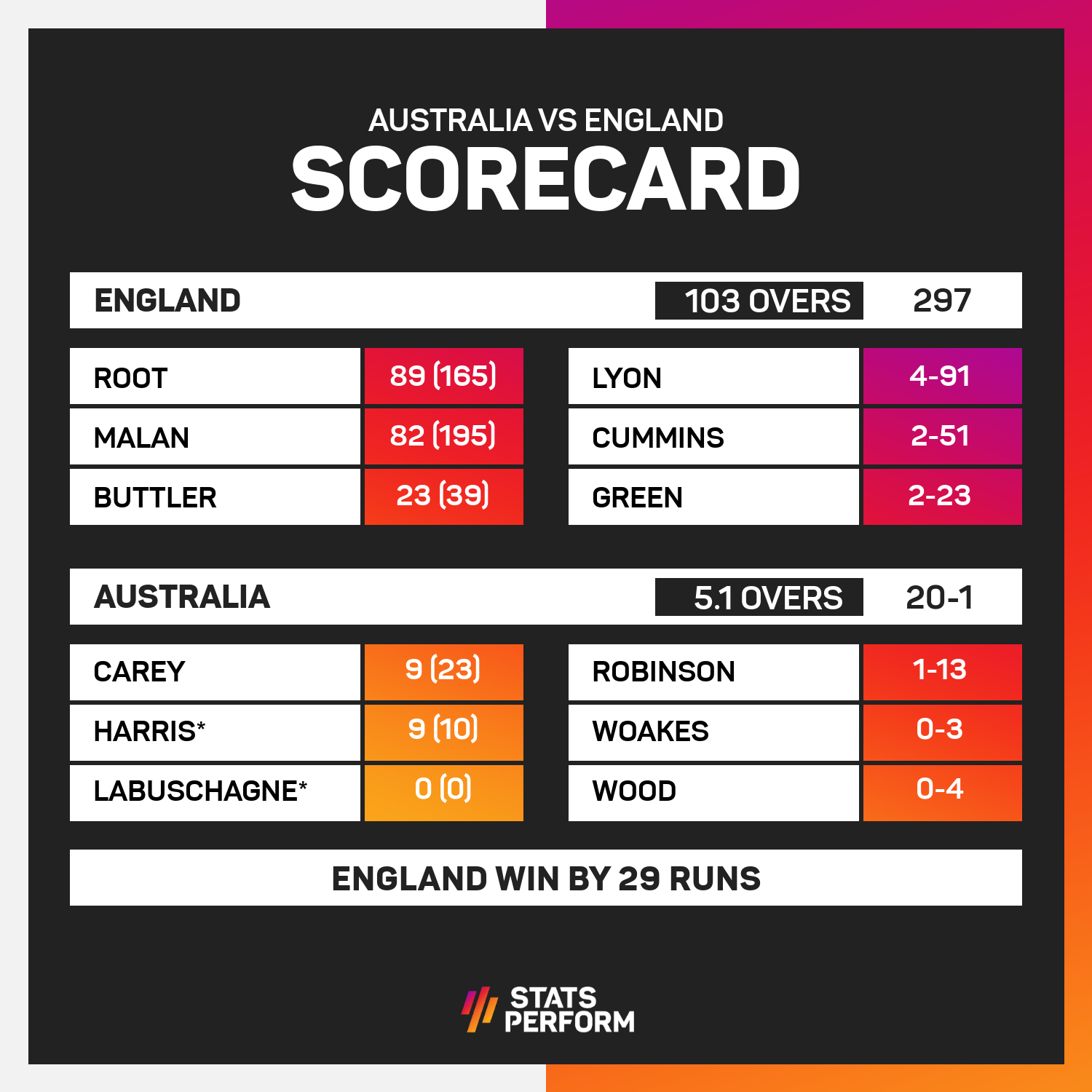 But England's revival quickly diminished as they crumbled and were eventually all out before lunch – losing eight wickets for just 77 runs.

Lyon sparked the collapse in the fourth over of the day, the milestone man got Malan (82) to edge onto his pad for Marnus Labuschagne to take a sharp catch at silly mid-off with the second new ball approaching, snapping a 162-run partnership.

Root added three runs to his overnight score before he fell to Cameron Green (2-23) and Ollie Pope (4) followed his captain back to the pavilion the very next over after attempting to cut a Lyon delivery, instead punching to Steve Smith at slip.

Australia sniffed blood and England simply had no answer as Pat Cummins (2-51) and Josh Hazlewood (1-32) got the wickets of Ben Stokes (14) and Jos Buttler (23), with Lyon cleaning up the tail, alongside Green.

After lunch, Marcus Harris (9 not out) hit the winning boundary to clinch Australia's victory following Alex Carey's dismissal for 9.

Before Lyon, only Shane Warne (708) and Glenn McGrath (563) had taken 400 wickets or more for Australia. The spinner joined the club after finally ending his quest for the milestone, having waited almost a year. Lyon became the seventh spin bowler to take 400 wickets in men's Test cricket.

The Gabba opener marked a Test debut for wicketkeeper Carey, who stepped in behind the stumps after former skipper Tim Paine opted to take a break from cricket. Carey capitalised, marking his bow with eight catches – becoming the first player in Test cricket to achieve the number on debut.

Harry Kane might be yet to get off the mark in Qatar, but England's players will never have any doubt over their captain, says Declan Rice.

There will be no shortage of coaches in the frame if Hansi Flick is replaced as Germany boss, but Jurgen Klopp is unlikely to be among them.

South Korea are through to the last 16 of the World Cup in the most remarkable of circumstances thanks to a late win over Portugal.