Fernando Alonso has justified his return to Formula One with a string of top-10 finishes, and Alpine were determined to keep him for 2022.

Fernando Alonso has secured a second season with Alpine after the two-time Formula One champion impressed team bosses on his return to the cockpit.

After two years out of F1, Alonso has had eight top-10 finishes in 11 races of this season to date.

His and the team's best results came in the Hungarian Grand Prix last time out, where Alonso took fourth place and Esteban Ocon won the race.

Alpine, who previously competed as Renault, said in a statement on Thursday: "Alpine is pleased to announce that two-time Formula One world champion Fernando Alonso will continue in its colours for the 2022 season alongside Esteban Ocon.

"The extension of Fernando’s contract signals the continuation of an already strong collaboration, fresh off the back of its historic maiden victory at the Hungarian Grand Prix, in which Fernando played a pivotal role."

Alonso believes the 2022 season can be particularly fruitful for Alpine, when a host of technical regulations are introduced that may lead to closer competition between the teams. 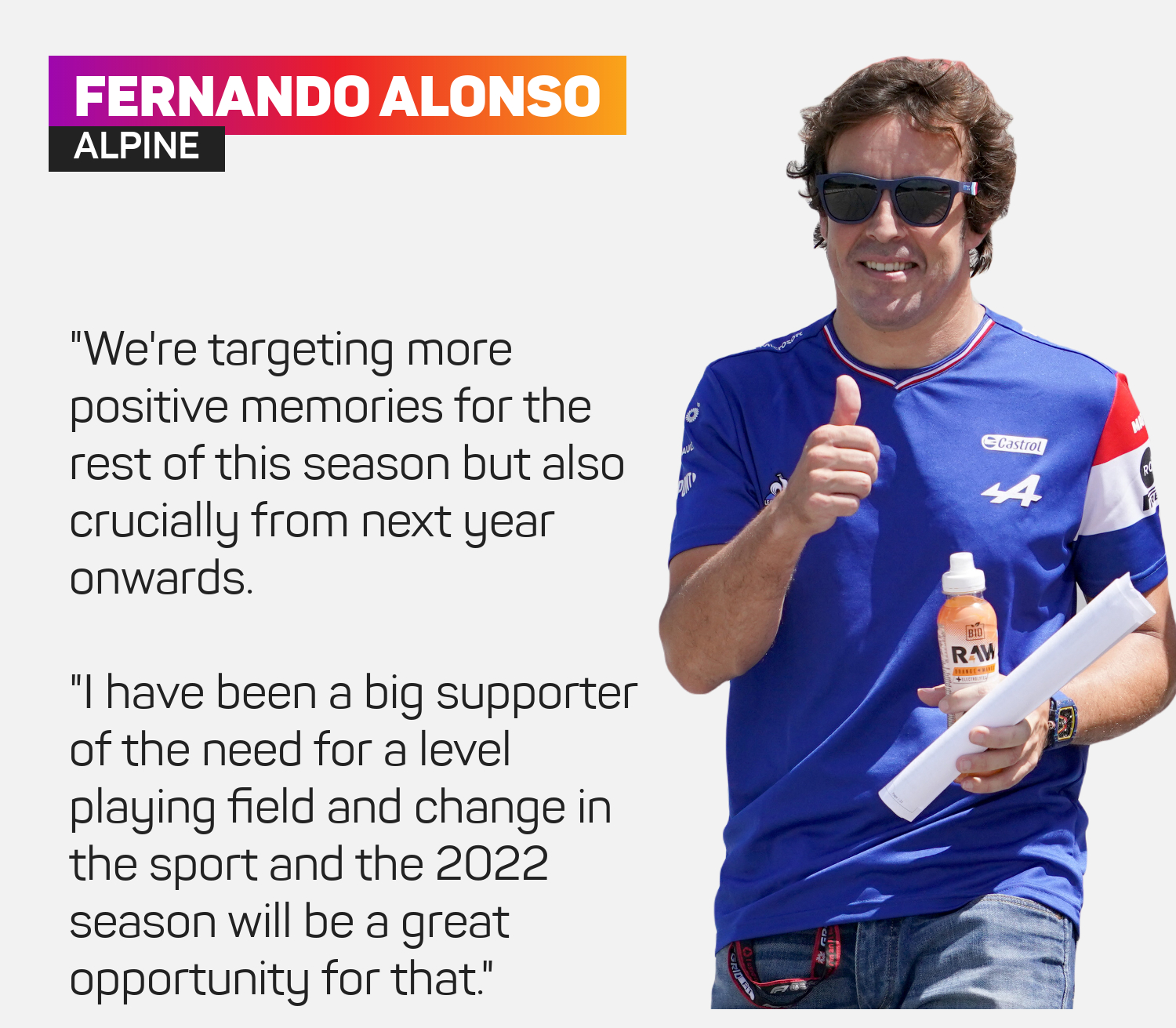 The 40-year-old Spanish driver said: "I'm very happy to confirm the contract extension with Alpine into 2022. I felt at home the moment I returned to this team and have been welcomed back with open arms.

"It's been a tricky season for everyone, but we've shown progress as a team and the result in Hungary serves as a good example of this progression. We're targeting more positive memories for the rest of this season but also crucially from next year onwards with the new regulation changes coming into Formula One.

"I have been a big supporter of the need for a level playing field and change in the sport and the 2022 season will be a great opportunity for that. I am looking forward to the rest of this year and racing alongside Esteban in 2022 for Alpine."

Alonso has competed in 322 F1 races across his career, winning 32 times and finishing on the podium on 97 occasions.

His F1 titles came as a Renault driver in 2005 and 2006, and Alpine CEO Laurent Rossi said: "He is just as hungry as we are for success and is putting in every effort to translate it to performance.

"For now, however, we need to focus on delivering a strong second half of the year, extract the maximum at every race and ensure we finish as high up in the constructors' standings as possible. This will put us in a golden position for next year and the significant opportunity it brings."

Lewis Hamilton expressed his gratitude after coming out of a crash with Max Verstappen at Monza relatively unscathed.

Verstappen gets three-place grid penalty for Russia after Hamilton collision

After being judged to have caused the crash that ended the Italian Grand Prix for him and Lewis Hamilton, Max Verstappen has been punished.

Max Verstappen slightly increased his lead over Lewis Hamilton at Monza but was accused by Toto Wolff of a "tactical foul".

Marc Marquez pushed Francesco Bagnaia to the limit in a MotoGP tussle for the ages at the Aragon Grand Prix.

After ending an 11-year wait for McLaren to get a one-two, Daniel Ricciardo - who won his first race since 2018 - was elated.

Max Verstappen and Lewis Hamilton crashed out at Monza after colliding, with Daniel Ricciardo and McLaren taking full advantage.

Marc Marquez fell short in an Aragon Grand Prix for the ages as Francesco Bagnaia finally tasted that winning feeling in MotoGP.

Max Verstappen will start the Italian Grand Prix in pole position and Lewis Hamilton is not confident about catching the Dutchman.

Ducati pair Francesco Bagnaia and Jack Miller lead the charge ahead of the Aragon GP, with Fabio Quartararo poised to pounce in third.

Allegri turns to mind games ahead of Milan clash: 'This game is more important for them'

Juventus have made a poor start to 2021-22 and Massimiliano Allegri is trying to ease pressure by shifting it onto Sunday's visitors Milan.

PSG to make late call on Mbappe before Lyon match

Paris Saint-Germain may be able to call on their star-studded front three of Kylian Mbappe, Lionel Messi and Neymar despite an injury.

Juventus v Milan: Szczesny and defences in spotlight as Serie A history beckons

Juventus and Milan clash on Sunday amid contrasting form in Italy's top flight. Stats Perform takes a look at the key questions.

Four months after the Indian Premier League was postponed, the action resumes in Dubai this weekend with Delhi Capitals the team to catch.

Maverick McNealy earned a two-stroke lead at the 2021-22 season opener at Silverado Country Club, where Jon Rahm was eliminated.