Vinicius and Courtois star as Madrid down Liverpool: The best Opta facts from Champions League final

Vinicius Junior and Thibaut Courtois were the heroes as Real Madrid downed Liverpool 1-0 in the Champions League final in Paris, securing a record-extending 14th European crown for Los Blancos.

Vinicius' second-half winner proved decisive as Liverpool failed to find a way past the outstanding Courtois despite piling on the pressure, as Madrid repeated their 2018 final win over the Reds.

While Jurgen Klopp's team have now missed out on both the Premier League and Champions League trophies after leading an incredible four-front fight for silverware this season, Carlo Ancelotti has led Madrid to a terrific LaLiga and Champions League double, reaching a personal landmark along the way.

Here, Stats Perform takes a look at the best Opta facts from the fiercely contested final. 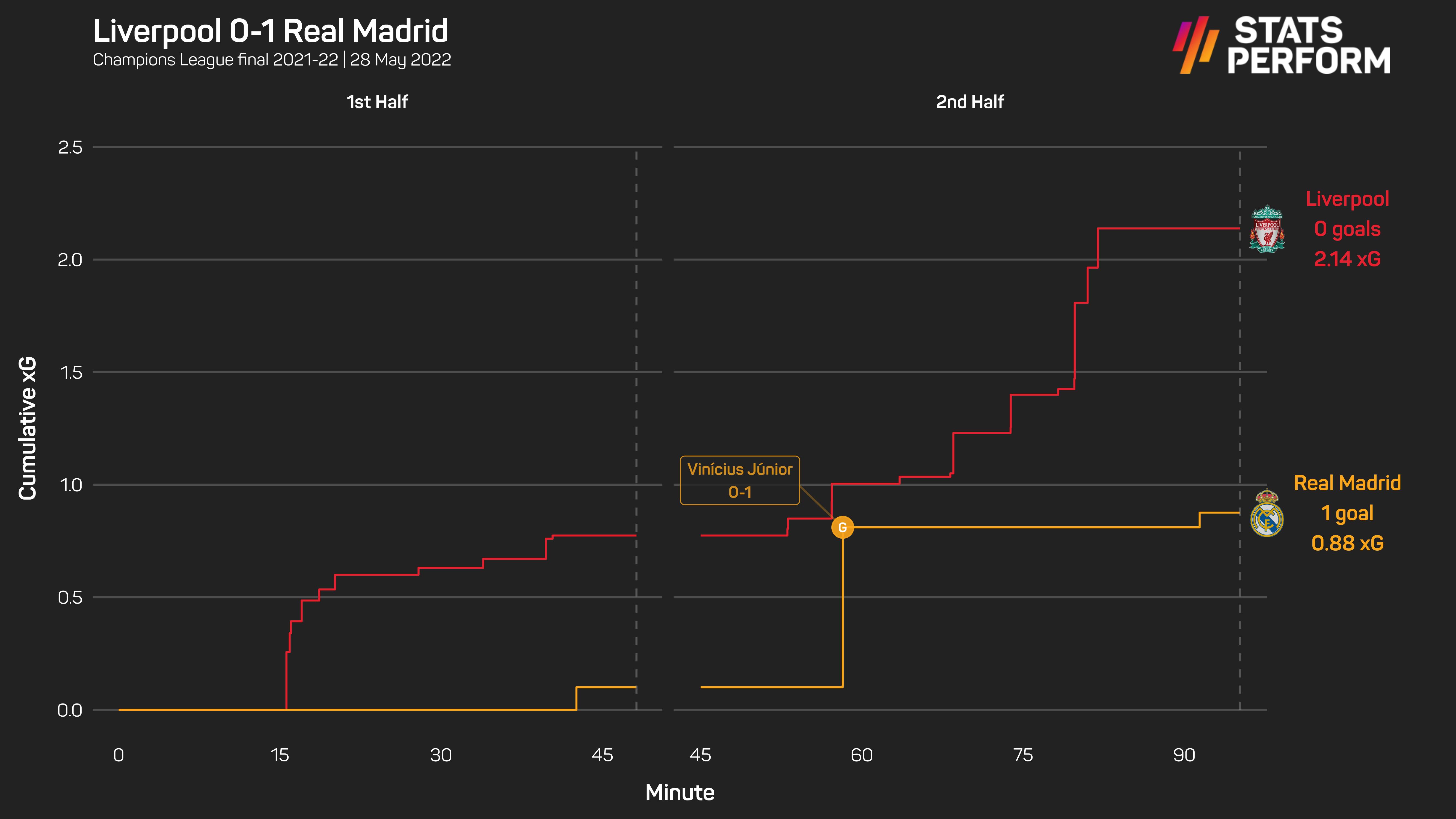 After kick-off was twice delayed at the Stade de France, Liverpool made a fast start to the contest but found Courtois in imperious form as they eventually fell to their third Champions League final defeat – only Juventus (five) have lost more, while Jurgen Klopp has lost more finals in the competition than any other manager (three).

It was not for want of trying, however: Liverpool had as many shots on target in the first half (five) as they did in their previous two Champions League final appearances combined (two in 2018 and three in 2019).

The Reds ended the match having racked up 24 shots, the most on record (since 2003-04) from a team who failed to score in a Champions League final.

Meanwhile, Courtois' nine saves in the match made up the highest tally in a single Champions League final (since 2003-04), surpassing Liverpool's Allison (in 2019) and Manchester United's Edwin Van der Sar (in 2011), both with eight.

0 - Despite winning the League Cup and the FA Cup, Liverpool failed to score a single goal in five-and-a-half hours of football in major finals this season. Halted. #LIVRMA #UCLfinal https://t.co/yOijyI5mTD

Courtois also made 59 saves throughout Madrid's run in the competition this term, setting a new single-season record after Petr Cech made 58 for Chelsea in their triumphant 2011-12 campaign (since 2003-04).

But it was Vinicius who proved the match-winner, escaping Trent Alexander-Arnold's attentions to tap home from Federico Valverde's cross in the 59th minute.

Vinicius' goal made him the first South American to register 10 goal involvements in a single Champions League campaign (four goals, six assists) while aged 21 or under since Lionel Messi recorded 14 for Barcelona in 2008-09 (nine goals, five assists).

Furthermore, at 21 years and 320 days old, the Brazilian became the second-youngest player to net for Los Blancos in a European Cup or Champions League final, after Marco Asensio against Juventus in 2017 (21 years, 133 days), and the first Brazilian to score the winner in the competition's final since Juliano Belletti for Barcelona in 2006, also in Paris (against Arsenal).

Madrid's victory means they have won the European Cup or Champions League twice as many times (14) as the next-most successful club in the competition's history (Milan with seven), and Los Blancos have also won in each of their last eight final appearances, defeating Liverpool in their past two.

Finally, Ancelotti became the most successful coach in the competition's history with his fourth title (also 2002-03 and 2006-07 with Milan and 2013-14 with Madrid), as he moved clear of Madrid predecessor Zinedine Zidane and Liverpool great Bob Paisley (both three). 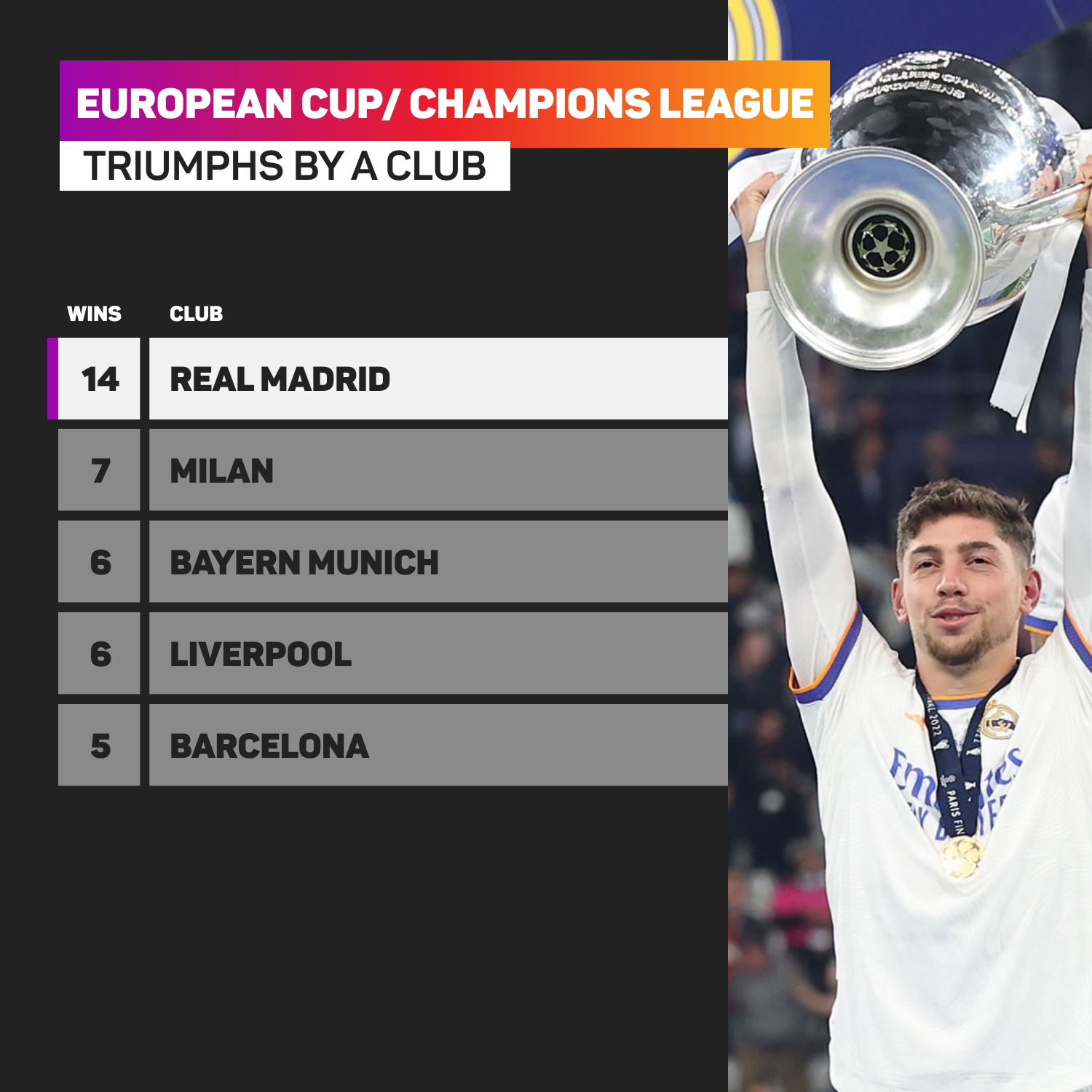 Cristiano Ronaldo is reportedly seeking an exit from Manchester United, but which suitors could be in the running for a deal?

Jurgen Klopp was thrilled to get the news that star Egyptian forward Mohamed Salah has signed up until 2025 with Liverpool.

Liverpool fans have another three years of Mohamed Salah to look forward to. Stats Perform looks at the numbers behind his Anfield career.

Mohamed Salah's future has been resolved, and the Egyptian forward has decided to stay at Liverpool and go after more trophies.