South Korea v Portugal: Sense of revenge could be enough motivation for A Selecao

There are many narratives tied to Friday's game, meaning it could be an even tougher job for South Korea against Portugal.

A few months beyond 20 years since a crunch group tie at the World Cup, South Korea and Portugal are ready to do it all again.

The Selecao are already through after two wins from two against Ghana and Uruguay, and barring a three-goal turnaround, their progression will come as group winners.

Head coach Fernando Santos could decide to rotate, but then again, perhaps the smell of revenge will be enough for him to go full strength once more.

The only previous meeting between South Korea and Portugal came at the 2002 World Cup, which South Korea won 1-0 on home soil in the final game of the group stage, a result that eliminated Portugal from the tournament.

This time it will be all or nothing for South Korea with only a win being enough, while also needing Uruguay to narrowly beat Ghana.

Paulo Bento's men have lost five of their last seven World Cup matches (W1 D1), as many as they had in their previous 16 (W5 D6), and are looking to win their third group game for just the third time at the tournament, previously doing so against Portugal in 2002, as mentioned, and in 2018 against Germany.

The first goal will be especially important as Portugal are yet to lose a match at the World Cup when they have scored first (P18 W15 D3), doing so without losing more than any other nation in tournament history. 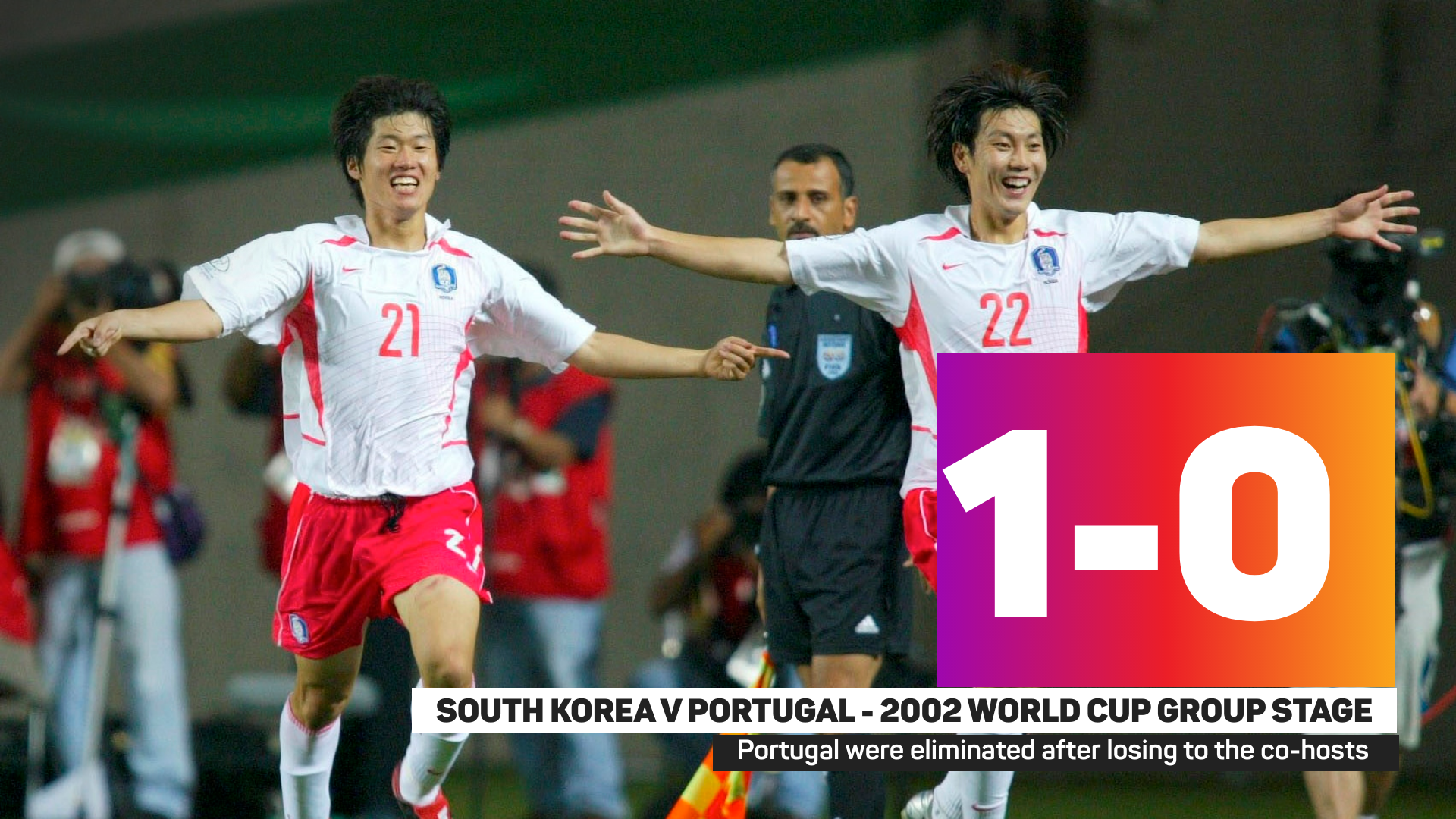 Bento will not be present for the game after receiving a red card at the end of the 3-2 defeat to Ghana, furiously reacting to referee Anthony Taylor's decision to blow the full-time whistle after his team had won a corner.

"We shall continue to prepare in same way as other matches – our strategy will not fail," his assistant Sergio Costa said after that game. "He won't be present on the matchday, which is a loss because Paulo is obviously a great manager, but I think it will bring us together."

The irony being that Bento played for Portugal in that 2002 humiliation against South Korea. In fact it turned out to be his final game for the national side, before returning as head coach between 2010 and 2014.

Portugal, meanwhile, are looking to win all three group-stage matches for just a third time, also doing so in 1966 and 2006.

If Cristiano Ronaldo and Co. can do so while also ending South Korea's tournament, there will likely be a sense of payback to go with it.

Son was always going to be the main man for his country, but so far the Tottenham attacker has been unable to show his true worth in Qatar.

He has been a generational talent for his country, though. Since the start of the 2010-11 campaign, Son has scored more goals in Europe's top five leagues than any other South Korea player (137).

Son also had the most shots (40), shots on target (19), scored the most goals (5) and created the most chances (27) of any player for South Korea during qualifying.

While most eyes have been on Ronaldo, as ever, his former Manchester United team-mate has been the real MVP of the World Cup for his country so far.

Fernandes has been involved in four of Portugal's five goals (two goals, two assists), and is only the second player this century to have registered multiple goals and assists in a team's first two group-stage matches, after Karim Benzema for France in 2014.

He also created 21 chances in qualifying, more than any other Portuguese player.

Portugal lack a desperate need for a result in terms of winning the group, and the Opta prediction model does not have them as overwhelming favourites, though Santos' men are still expected to win with a victory chance percentage of 58.4.

The draw, which like a Portugal win is of no use either to South Korea's hopes, is rated at 22.3 per cent, while that all important victory for the Taegeuk Warriors is given a 19.3 per cent chance.

The Sotheby's auction sale result has only been exceeded by Michael Jordan's Last Dance jersey and Diego Maradona's Hand of God shirt.

Pep Guardiola is not reading too much into Manchester City's win over Arsenal in the FA Cup, as the teams tussle for Premier League glory.

Marcos Alonso has extended his Barcelona stay by another year, much to the delight of head coach Xavi.

Brighton reportedly rejected Arsenal's £60million bid for Moises Caicedo, but the midfielder has taken matters into his own hands.

Jurgen Klopp believes Liverpool must keep their heads high as he plots a return to trophy-winning ways for his struggling Reds team.

Pep Guardiola got the better of his former assistant Mikel Arteta as Manchester City toppled Arsenal in the FA Cup fourth round on Friday.

Kieran Trippier feels he is playing the best football of his career at Newcastle United after extending his stay at the club.

Conor McGregor feared the worst when he was struck by a car while out cycling, and posted on Instagram the aftermath of the incident.

FIFA has punished a quartet of Uruguay players and the country's national FA for their misconduct after going out of the World Cup.

Anrich Nortje stepped up when South Africa needed him as England collapsed after a stunning century from Jason Roy in the first ODI.