Silva sorry as Man City fail to finish off Newcastle

Manchester City recovered from 3-1 down to draw against Newcastle United, but Bernardo Silva was not entirely pleased.

Bernardo Silva was disappointed Manchester City could not fully complete the comeback in their thrilling 3-3 draw with Newcastle United at St James' Park.

City trailed by two goals with 54 minutes played of Sunday's Premier League clash before Erling Haaland and Silva struck in the space of four minutes after the hour mark.

Pep Guardiola's side finished the game with an expected goals (xG) return of 2.20, compared to 2.02 for Newcastle, who had themselves recovered from a goal down to lead.

Although pleased with the way City responded to take a point against Newcastle, Silva felt the visitors had time to find a winning goal and maintain their perfect start to the season.

"We scored the third goal in the 64th minute, so it was still very early in the game," Silva told BBC Sport. "I'm a bit disappointed we didn't score the fourth.

"But still, it's a good reaction from the team. It wasn't a perfect game but we will take the point. It is what it is. Seven points from three games isn't bad." 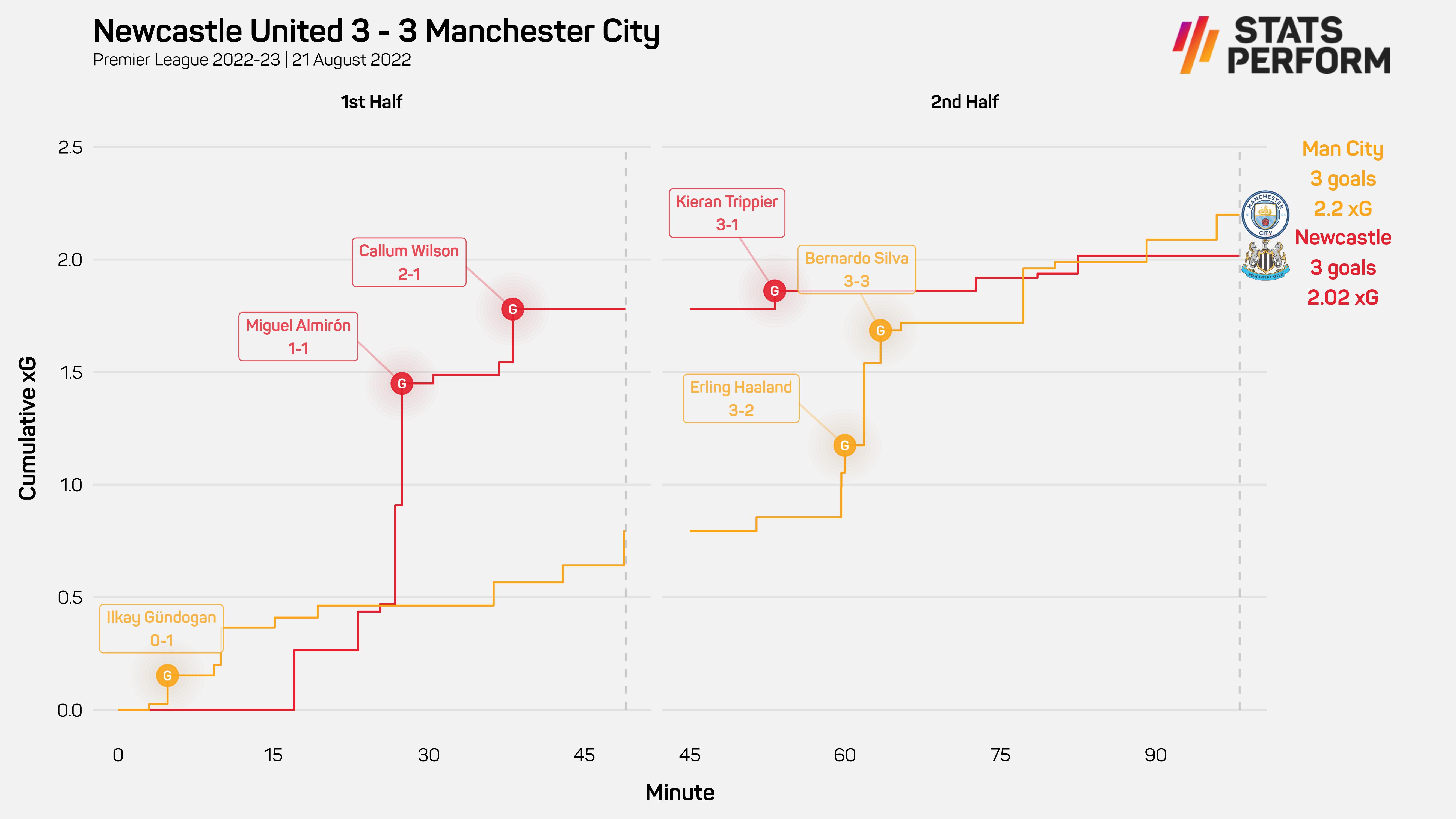 Goals from Miguel Almiron and Callum Wilson put Newcastle in front at half-time after Ilkay Gundogan had opened the scoring for City.

A sublime free-kick from Kieran Trippier had United on course for a huge victory, only for Haaland and Silva to hit back and extend City's unbeaten away league run to 20 games.

City have now avoided defeat on each of the past three occasions they have fallen behind in the league, having previously recovered against West Ham and Aston Villa in May.

They are the fourth side to avoid defeat in three straight Premier League games when two goals down after Manchester United (1997), Liverpool (2008) and West Ham (2016).

"It was a very intense game," Silva added. "We started very well. The first 15 minutes were ours. My perception on the pitch was that we started attacking too quick.

"When we start playing like this and it's too quick it's better for the opponents. The last 25 or 30 minutes of the first half were very tough.

"They could have scored more than twice in that time. Overall we played quite well but not controlling their counter-attacks and runners.

"You'll suffer and that's what happened today. We knew how tough it is to come here. The atmosphere is great and they're a very physical team.

"They've been great over the last few months. They're in a great state of mind with very positive energy. We should have controlled the game better than we did today."

A message from John!

Silva also assisted Gundogan's opener, making it the fourth time in the Premier League he has both scored and set up a goal in a single game, each coming away from home.

The Portugal international has been linked with a move to Barcelona this window, but Guardiola has repeatedly played down a move ahead of the September 1 deadline.