Karim Benzema was crucial to Real Madrid last season, but they are reportedly not signing a backup to him and that could be risky.

Carlo Ancelotti's return to Real Madrid last year came as something of a surprise to most.

While the job he'd done at Everton was generally seen as fine, there was nothing about his time at Goodison Park that suggested the Italian would be back at the top of the game in his next job.

His appointment at the Santiago Bernabeu could've almost been interpreted as a pointed dig at Clasico rivals Barcelona, where managerial hirings tend to be based around 'philosophy' – few could say that about Ancelotti, a coach arguably regarded more for his motivational skills, tactical flexibility and winning than for sticking to one defined brand of football.

Regardless of how surprising Ancelotti's return was, he certainly got the job done. Madrid looked certainties for the title virtually all season and pulled off great escape after great escape to eventually win the Champions League, traversing one of the toughest routes to European Cup glory ever seen.

But let's not forget, Ancelotti's won the Champions League with Madrid before. Last time, in 2014, he lasted only another year and a day before he was discarded.

From Milan dynasty to short-term guarantee

Perhaps it shouldn't be a shock, given many of the clubs he's coached have been among the biggest – and that usually means impatient by extension – teams in Europe, but Ancelotti hasn't been in charge of a single club for more than two consecutive full seasons since leaving Milan in May 2009.

Granted, his spells at Paris Saint-Germain and Everton ended essentially because Madrid came calling, so who's to say how long he'd have been in charge. But clearly there has been a pattern in his working life since Milan.

Ancelotti will be acutely aware of the expectations upon him at Madrid as he's lived through them before and paid the price for failing to achieve his targets.

But you have to wonder if anything will be different this time around. 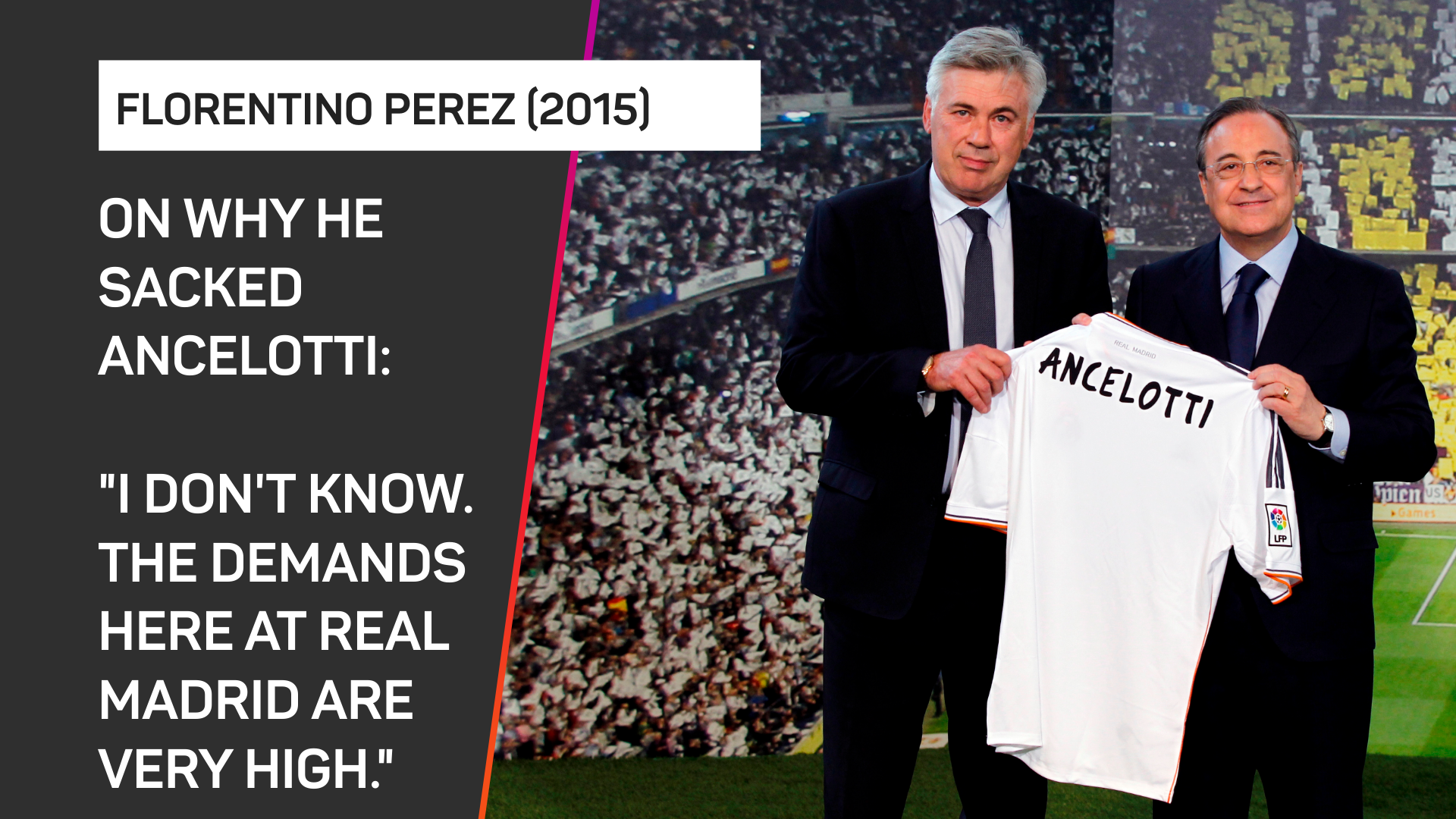 Ancelotti's dismissal in 2015 came down to the fact Madrid didn't win a (major) trophy in the 2014-15 season. Florentino Perez's decision at the time wasn't universally popular, though no one would've been surprised.

In the culture created by Perez at the club, a lack of success simply equates to failure, and clearly even the good will attained by winning La Decima – Madrid's 10th European crown – only lasts you so long.

Perez's statement to the media even seemed to admit there being a degree of not knowing what else to do, as he said: "It was a very difficult decision to make; the demands at this club are the utmost because Madrid always wants to win silverware.

"The affection that the players and the fans have for Carlo is the same as the affection I myself have for him. What did Ancelotti do wrong? I don't know. The demands here at Real Madrid are very high."

Essentially, since his Milan days, Ancelotti has been brought in by teams to achieve success quickly and, for the most part, he's done that almost everywhere he's been – but long-term success in one place has eluded him.

Presumably then, Ancelotti will have to again win at least one of LaLiga or the Champions League to stick around for a third season. That stands to reason at Real Madrid, and there's no reason they would be considered incapable on either front, but expecting everything to fall into place like last season is asking for trouble.

Who's to say Madrid won't cruise to the title again with Karim Benzema conquering every team in his path? It's entirely possible.

The key differences this time around are the fact Madrid are heading into the season without a defined back-up striker for Benzema, and Barcelona have strengthened significantly.

Firstly on Barca, if we assume they are able to register all of their new signings in time for the season's start, they'll have bolstered a team that finished the 2021-22 season very well. In fact, since the start of 2022, their 45 points was more than any other LaLiga team.

Granted, Madrid played one game less (19), but if they had contested a 20th match and won it, they'd still have been two points shy of Barca.

The change inspired by Xavi cannot be overstated and, as much of a mess as the club is off the pitch, there's every reason to expect them to be a force on it this season. 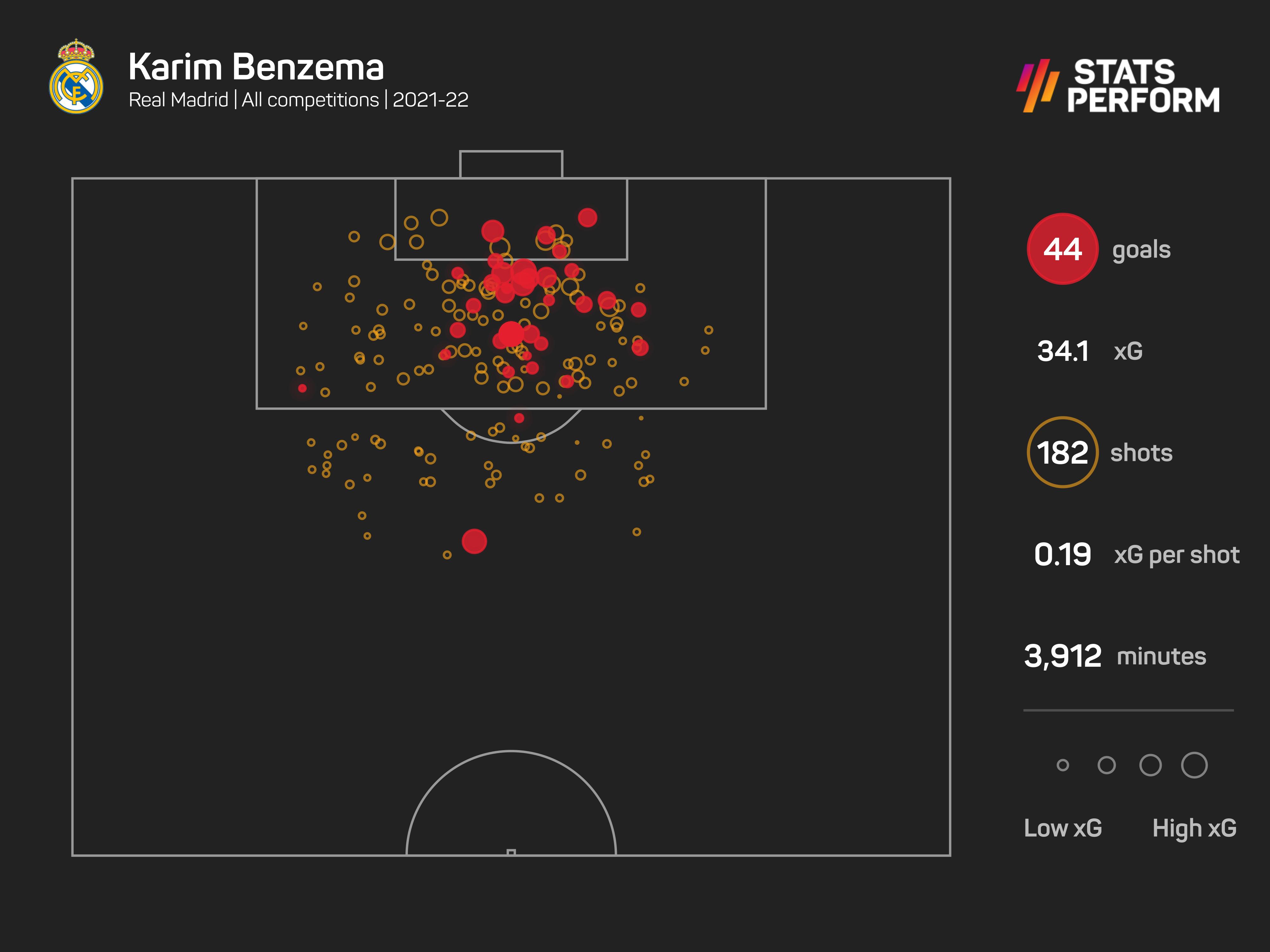 For Madrid and Ancelotti, again their hopes will be pinned on Benzema. Of course, on the face of it that's not an issue. He's scored at least 21 league goals in each of the past four seasons and never made fewer than 27 top-flight appearances for Los Blancos.

As a difference-maker and consistent presence, he's their Mr Reliable. But what if he does pick up a major injury: who will Madrid rely on to fill the Benzema void?

Vinicius Junior enjoyed a remarkable season but wouldn't be suited to the Benzema role, stylistically or as a leader. Again, when Eden Hazard is fit, he is not a central striker, while Mariano Diaz has started just 11 league games in four seasons.

Madrid's decision to get rid of Luka Jovic was probably the right one given how underwhelming the Serbian had been, and there's no guarantee anyone else brought in as a backup would've been more effective. 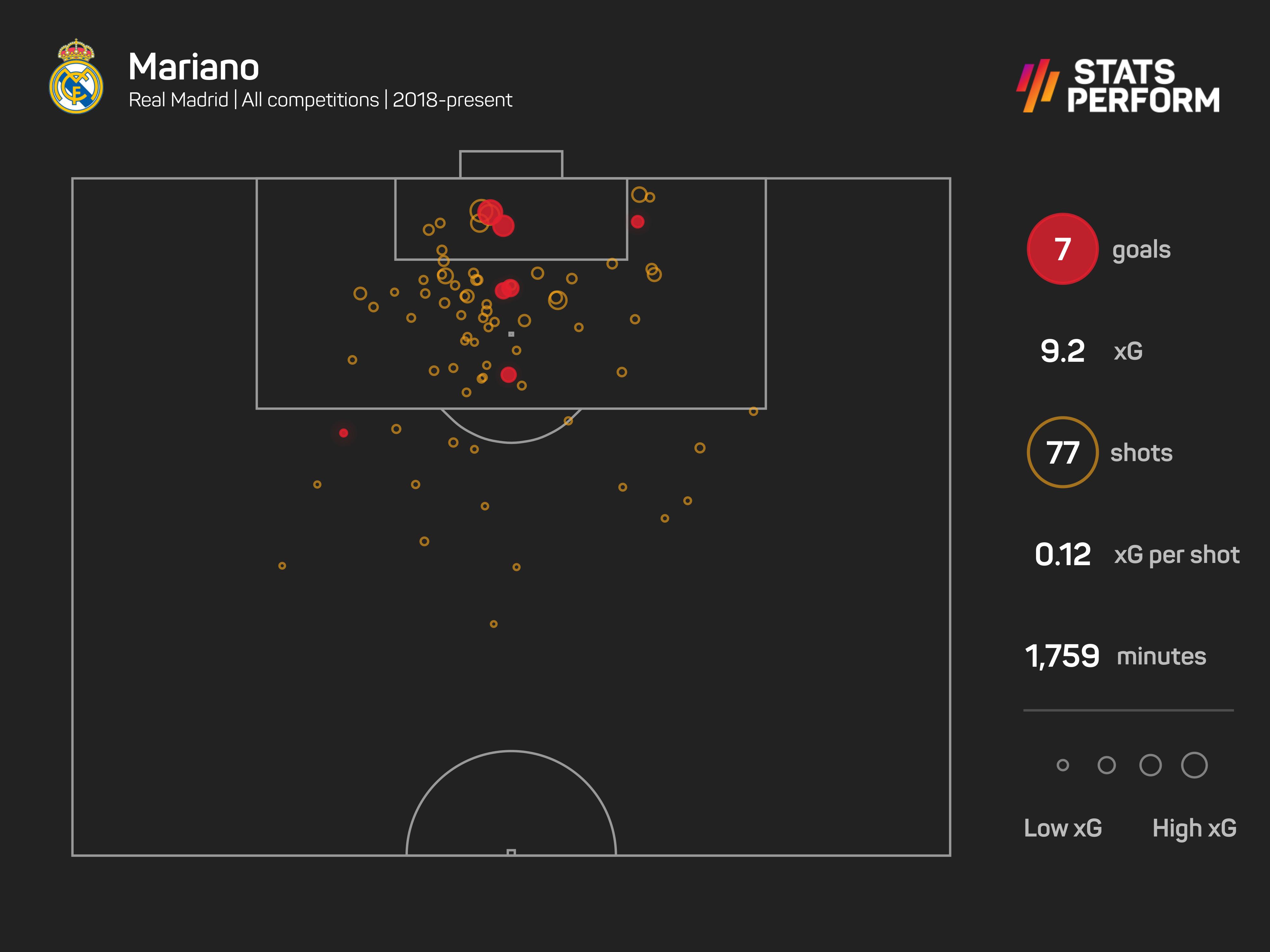 Even if they were granted special dispensation to sign another LaLiga-based striker out of the transfer window, mid-season integration for that player would be tough in every way.

Yes, yes, yes, it's all hypothetical and no one likes to think about the worst-case scenario, but surely it's better to plan for that possibility than to leave it to chance? Perhaps Ancelotti has a master backup plan hidden up his sleeve in the event of losing Benzema for a while – we'll only find out if it happens.

But if it does and his answer is to rely on Diaz, there's little hope of Ancelotti reaching that elusive third season.