Sadio Mane was a key cog as Liverpool secured the title, but he has struggled to have quite the same impact this season.

It turns out all Liverpool needed was a short midweek break to Budapest to reconnect, restore some confidence and rediscover their ruthless streak.

Tuesday's 2-0 triumph over RB Leipzig in the Hungarian capital was a much-needed boost for Jurgen Klopp's squad, as the Champions League seemingly holds their only hope of silverware.

Before the second leg, though, they resume a Premier League campaign that has seen the focus switch from retaining the title to finishing in the top four. With no club spared from feeling the financial impact of the ongoing coronavirus pandemic, the Reds can ill-afford to miss out on the monetary benefits that come from playing in Europe's premier competition.

Next up: the Merseyside derby on Saturday. Liverpool welcome their neighbours to Anfield having lost three league games on the spin for the first time in Klopp's reign, though the European trip helped quickly lift the gloom that had engulfed them following the disheartening 3-1 defeat to Leicester City.

Mohamed Salah scored against Leipzig, meaning the Egyptian now has 24 in all competitions. There was also a goal for Sadio Mane, who – unlike his fellow forward – has not quite hit the same heights as he reached previously.

A one-on-one finish lifted Mane's tally for the season to 11 in 31 appearances, though just seven of those goals have come in league action. The Senegal forward finished level for the Golden Boot with Salah and Arsenal's Pierre-Emerick Aubameyang in 2018-19 on 22 goals, while last term he managed 18.

It will take a strong finish down the stretch to get close to those figures again, but is there a clear reason for Mane's dip in productivity?

20 - Sadio Mané has scored 20 goals in all European competitions for Liverpool, becoming only the fifth player in the club's history to reach that total. Famous. pic.twitter.com/lPwcaQ2zo0

ISSUES UP FRONT - AND AT THE BACK

After 24 games in 2019-20, runaway leaders Liverpool had scored 56 goals and let in 15. At the same stage this season, they have conceded 32. Without a solid foundation to build on, the sense of invincibility has disappeared, replaced instead by a vulnerability that offers opponents hope, provided they repel what comes their way.

The attack could help mask some of those defensive deficiencies. While they have managed fewer goals this season (45), the numbers have remained relatively consistent with previous years.

Though Liverpool's shot conversion rate of 17.58 per cent is slightly lower, they have done better when it comes to putting away big chances, per Opta data. At 45.31 per cent, the Reds have been more successful than a season ago (40.37), albeit their minutes-per-goal average is obviously up (48 compared to 40.24, while in the 2018-19 season it went even lower, down at 38.43).

After consistent improvement, a plateau or a dip was always going to come along at some stage. What was not expected, however, is the number of injuries Klopp has had to deal with. It should not be underestimated how the rotation behind the established forward line has had an effect, particularly with midfield regulars Fabinho and Jordan Henderson having to fill in for absent centre-backs.

Key absences have obviously hampered Liverpool, but the established trio up top have remained relatively consistent in Klopp's line-ups. Diogo Jota did arrive to provide competition, yet his fast start to life on Merseyside was put on hold by a long-term injury. Yes, even new recruits were not safe from suffering pain.

Predominantly playing on the left side of a front three, Mane has occupied similar positions to the previous season. His total number of shots appears on course to be similar, though there has been a noticeable decline when it comes to converting them.

His success rate of 14.29 per cent with attempts is his lowest since signing for the club. There is no such regression when it comes to taking big chances, yet his average of 255 minutes per goal is not just a major rise on previous years with Liverpool, but also higher than either of his seasons spent with Southampton.

It is, therefore, hardly surprising that Mane is underperforming in terms of his xG (expected goals) rate for 2020-21, with his seven goals from 63 attempts under his expected total of 9.3. In contrast, when helping secure a long-awaited championship, Liverpool's first in the top flight for 30 years, he hit 18 goals - a total managed from 77 shots - to comfortably outperform his xG of 13.7. 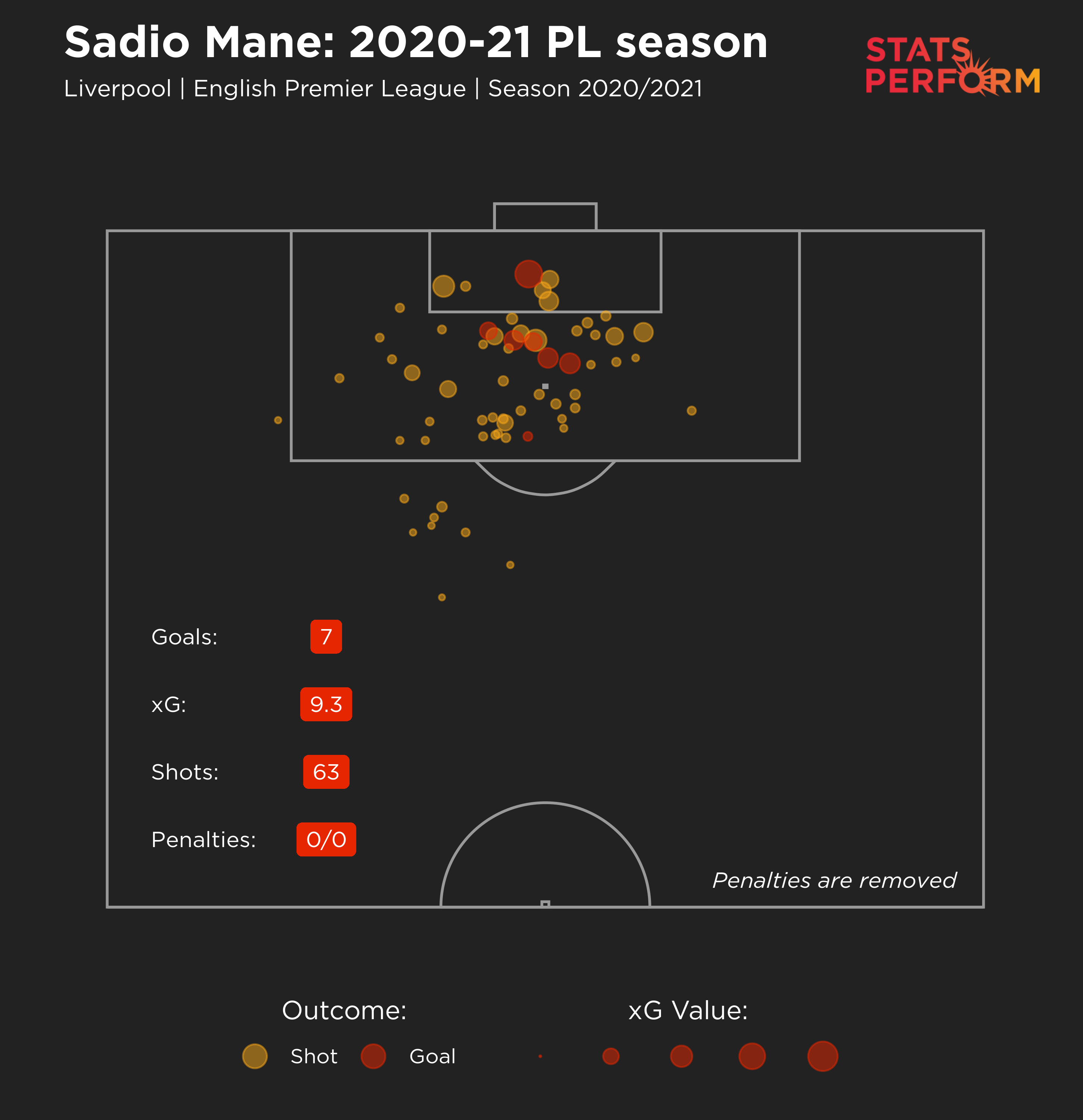 Having scored against Leipzig, Mane will be aiming to once again make an impact in what looks to be a pivotal derby for both teams.

The 28-year-old was on target against Everton in the 2-2 result at Goodison Park back in October, a game that changed Liverpool's course dramatically as Virgil van Dijk suffered a serious knee injury. There were signs of cracks appearing before then - most noticeably in the shock 7-2 defeat at Aston Villa - but the Dutchman’s absence continues to be keenly felt.

The Reds leaned heavily on Andy Robertson and Trent Alexander-Arnold as attacking outlets on their way to being crowned champions. The full-back pairing had 16 assists between them, the former leading the way with 10 (vastly higher than his xA - expected assists - value of 4.88).

This term, they have not quite had the same impact going forwards. They have three assists each, in line with their xA figures. Mane has also contributed the same number, having registered seven in the league in 2019-20.

Fatigue - both mental and physical - could also be an issue for Mane and his team-mates. According to former Liverpool player Vladimir Smicer, it would be understandable considering what they have been through, not just across the past few months but indeed ever since their unlikely run to the Champions League final in 2018.

"Sometimes we are missing a bit of freshness in important moments in the game, which is the difference in regard to last season," Smicer told Stats Perform News courtesy of KIA.

"Even the VAR decisions against Liverpool this year, where last year everything was perfect, going well.

"That might be why even Mane – a fantastic player, in my eyes one of the best players in the world – is suffering a little bit, whether it be with fewer goals, or his offensive potency."

Everton could be just the opponents to raise levels again, though. Mane has never lost a derby meeting in his Liverpool career, a record he will be keen to protect this weekend.

Jurgen Klopp's Liverpool snatched third place after a late burst of wins, but their 2020-21 season was a huge comedown from the title high.

Liverpool forward Diogo Jota hopes it will not be long before he can experience playing in front of a full crowd at Anfield.

The Badminton Association of Malaysia (BAM) are determined to close the gap on dominant forces as quickly as possible after clinching the country’s first Tokyo Olympics medal through Aaron Chia-Soh Wooi Yik.

Miles Robinson headed in the 118th-minute winner as the United States won another title after June's CONCACAF Nations League success.

Lando Norris had no time for Valtteri Bottas' apology after the Finn sent both men out of the Hungarian Grand Prix on the first lap.

NBA stars Chris Paul and Kawhi Leonard are expected to decline player options for next season but may stay with their teams.