Leeds United and Everton learning to live without Raphinha and Richarlison, but who is coping better?

Richarlison and Raphinha both headed for pastures new after last season, and now their old teams face off at Elland Road.

Leeds United host Everton on Tuesday, but both sides are learning to adapt to life without two star Brazilians.

Raphinha and Richarlison were instant hits after joining the clubs in 2020 and 2018 respectively.

While Raphinha was a relatively under-the-radar arrival from Rennes for a reported £17million, eyebrows were raised when Everton spent an initial £40m to bring in Richarlison from Watford.

A double on his Everton debut swiftly endeared Richarlison to Evertonians, and he went on to score 53 goals across all competitions in his four seasons at Goodison Park.

Neither player will be involved at Elland Road on Tuesday. Raphinha is at Barcelona, and Richarlison will be preparing for Tottenham's match against West Ham.

But who has been the biggest miss so far, and what strides have Leeds and Everton taken towards attempting to replace them?

What are they missing?

Across his two seasons in the Premier League, Raphinha directly contributed to 29 goals, scoring 17 times and providing 12 assists, at least one more than any team-mates.

The variety of his strikes was hugely impressive, with seven of his league goals for Leeds coming from outside the area. Only one player – Southampton captain James Ward-Prowse – could boast a better total (nine) in the same time frame. That quality was on show when he planted a wonderful strike into the top-right corner for Barca against Real Madrid in a pre-season friendly in the United States.

He has started well at Barca, with only three players in LaLiga creating more goalscoring opportunities so far than the 25-year-old (eight).

Raphinha's 11 league goals last season marked his best performance since the 15 he netted in the 2017-18 campaign, when he played for Vitoria Guimaraes in Portugal. He did not score as freely for Sporting CP, and only managed seven goals during his sole full season with Rennes in France, but in Marcelo Bielsa's system, he thrived. 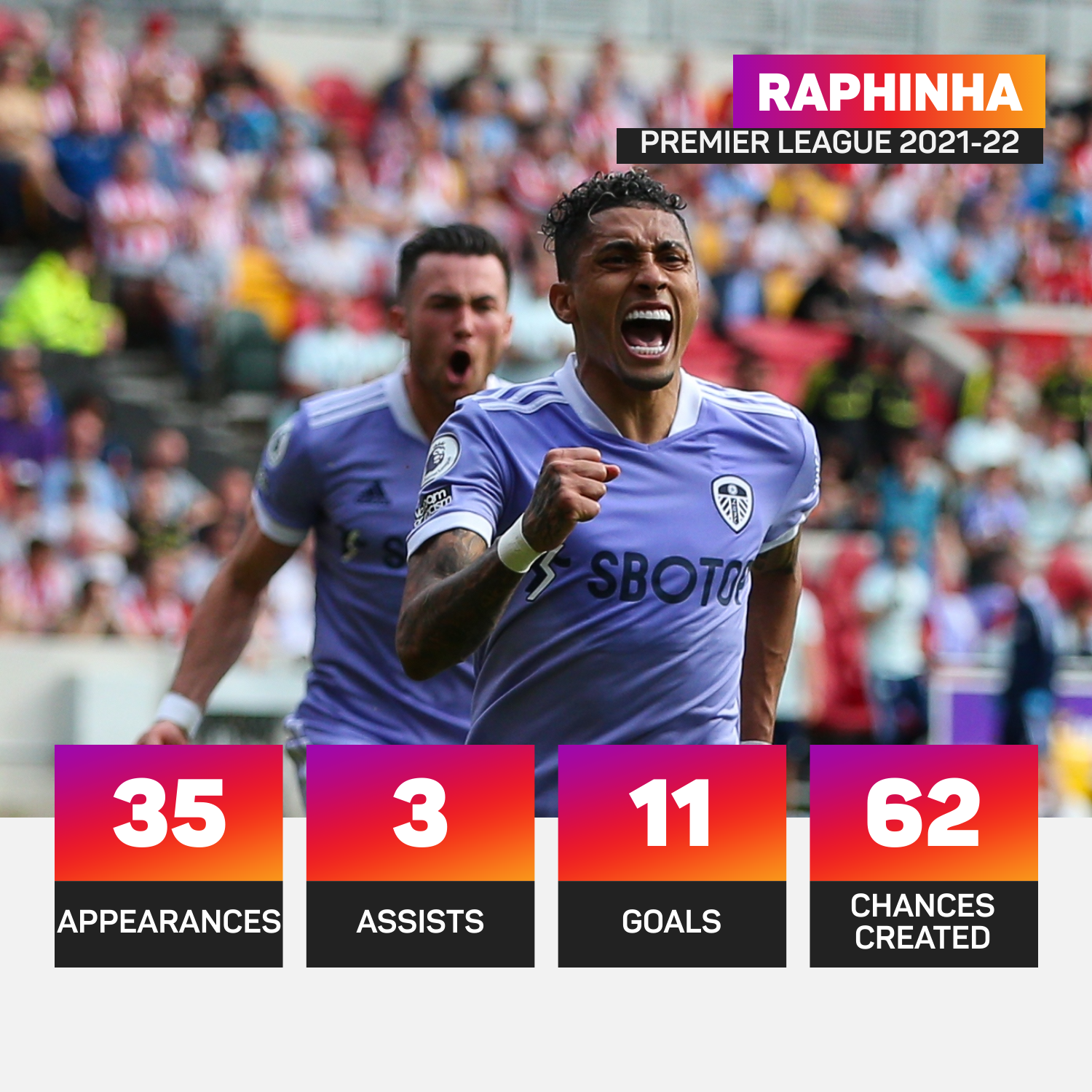 One of the hardest-working wide players in the Premier League, Richarlison provides flair to go with the graft and snide that endears him to his fans. He played at least 30 league games in each of his seasons on Merseyside, operating all across the front line and even as a number 10 at times under Rafael Benitez.

While not as creative as Raphinha, whose tally of 129 chances created in the league for Leeds betters the total managed by Richarlison in his four years at Everton (109), Richarlison's knack of finding space in behind defences and between the lines mean he is often in the right place at the right time to apply a finishing touch.

Meanwhile, his tenacity off the ball was demonstrated perfectly by his assist for Harry Kane's second goal for Spurs against Nottingham Forest on Sunday. Having chased what looked like a lost cause, Richarlison picked out Kane with a sublime outside-of-the-boot cross, supplying Tottenham's talisman with a simple header into a gaping net. 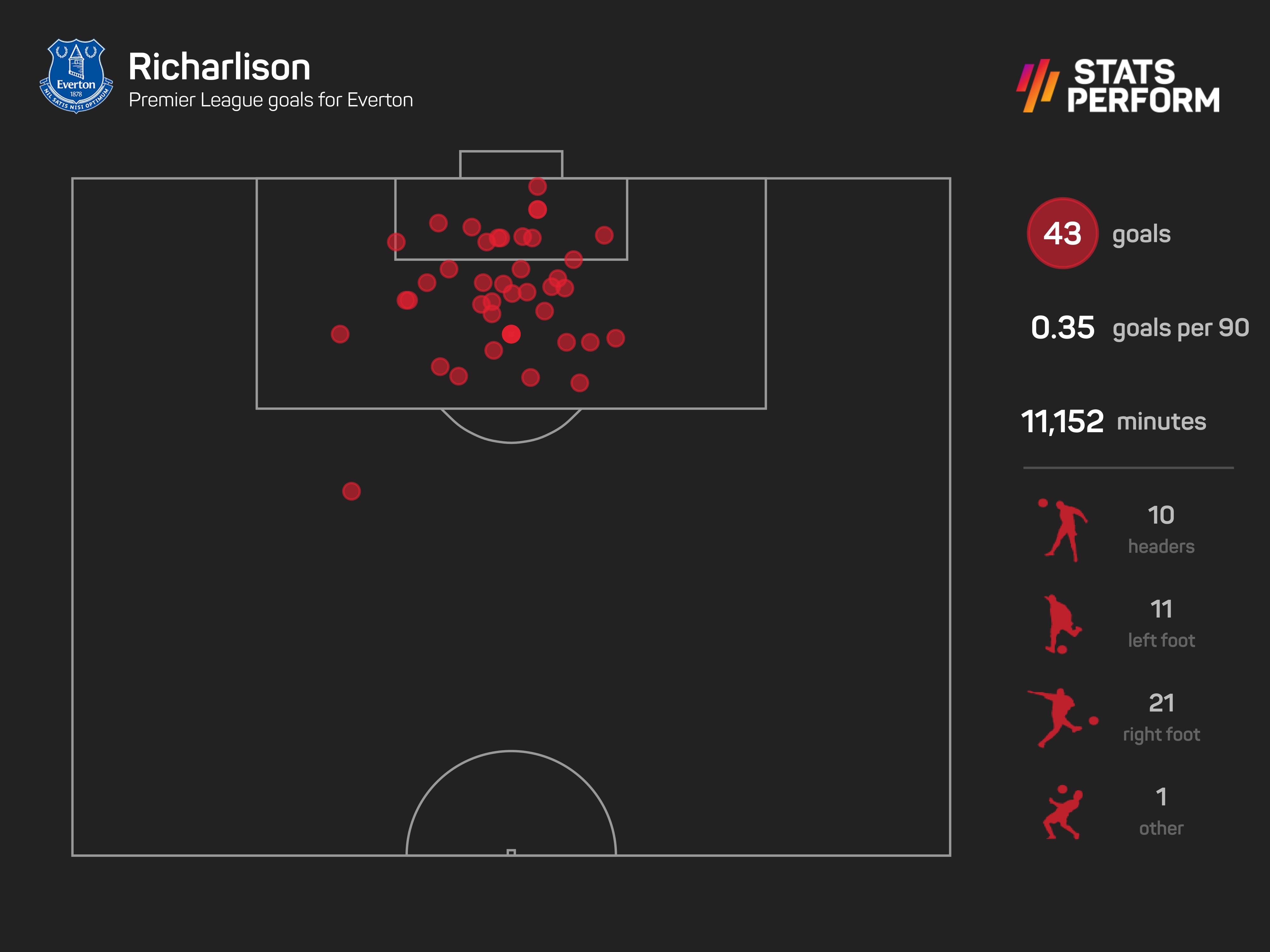 Raphinha was not the only big player to leave Leeds, with Kalvin Phillips having been sold to Manchester City.

Leeds, eager to back Jesse Marsch, moved quick to reinvest those funds into the squad. Luis Sinisterra was drafted in from Feyenoord as Raphinha's de-facto replacement.

More comfortable playing on the left, but also capable of featuring from the opposite flank, Sinisterra has pace and skill in abundance. A hamstring injury in pre-season was cause for concern but he returned in time to make his debut as a substitute against Southampton on August 13.

A wonderful strike on his full debut – in an EFL Cup win over Barnsley last week – demonstrated what the Colombia international, who scored 23 goals for Feyenoord last term, is all about.

Brenden Aaronson, Marcsh's compatriot, is an attacking midfielder who shone for Salzburg and has made a bright start to life in England and will help plug the gap, too.

Matters have been more complicated for Everton when it comes to replacing Richarlison.

While he has so far had to settle for cameo roles at Spurs, Richarlison was Everton's attacking hub. With Dominic Calvert-Lewin injured for so much of last season, it was his 10 goals, with six of those coming from April onwards, that were crucial to keeping Frank Lampard's team up. He was involved in 10 of Everton's 11 league wins in 2021-22.

With Richarlison sold at least in part to appease the Premier League's profit and loss regulations, Everton have not been able to use the initial £50m they received from Spurs as freely as they would have liked.

Dwight McNeil has been brought in but is not a goalscorer, putting extra onus on Demarai Gray and Anthony Gordon, who is drawing the interest of Chelsea. Neal Maupay arrived last week to ease some of the strain, but with Calvert-Lewin injured again, Everton's attack looks blunt. 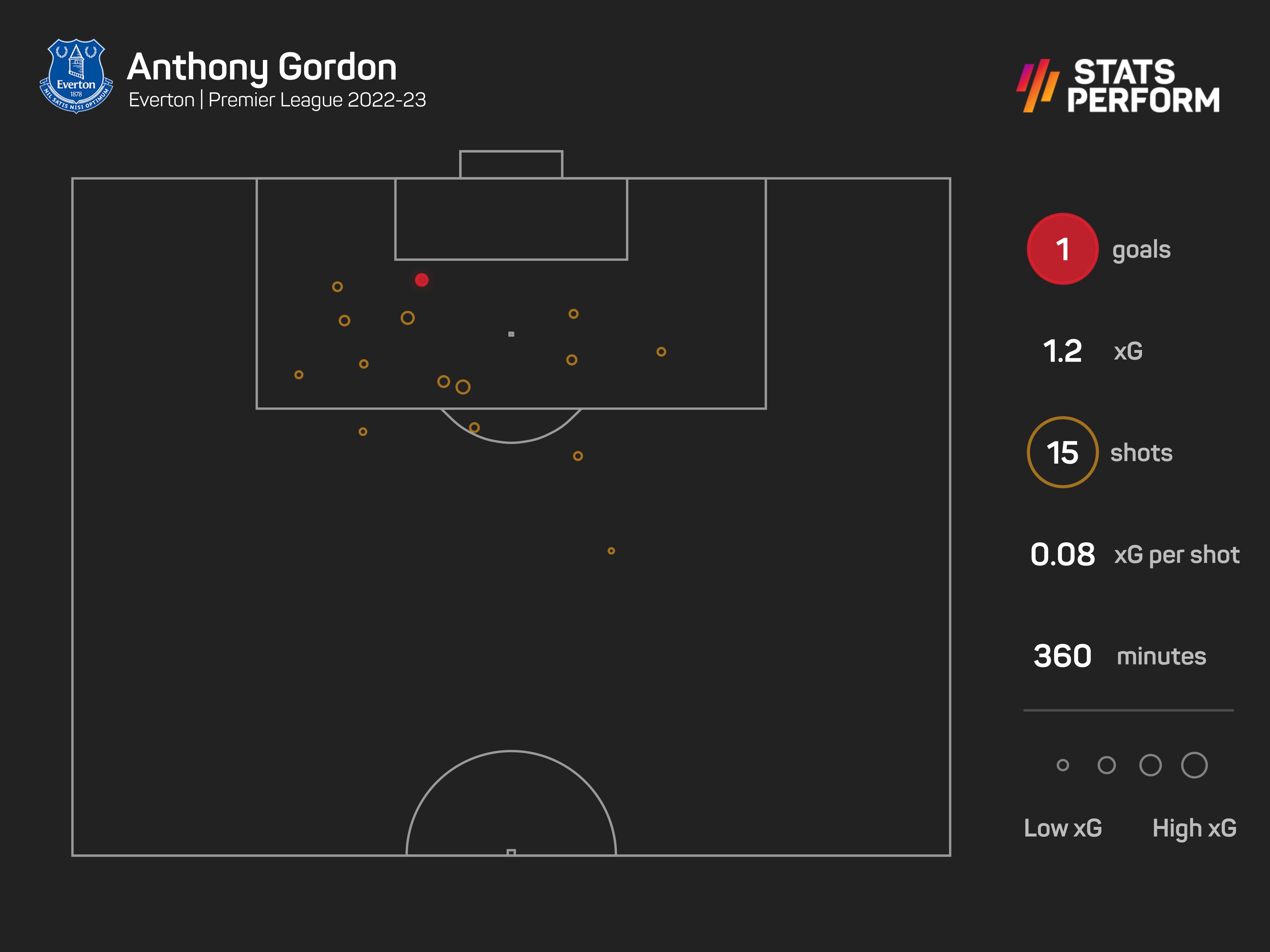 Who is coping better?

At the time of writing, Leeds look better equipped to make up for the loss of Raphinha than Everton do Richarlison.

That could change in the coming days, with Everton linked with moves for Ben Brereton Diaz (Blackburn Rovers), Hwang Hee-chan (Wolves) and PSV star Cody Gakpo, with the latter two also said to interest Leeds, and the Whites' own Daniel James. That being said, those moves might hinge on Gordon's future.

Leeds have taken seven points from their opening four fixtures, whereas Everton have just two to their name. While they were defeated by Brighton on Saturday, they have already scored seven goals. With striker Rodrigo in form, the Whites have slightly outperformed their expected goals (xG - 6.8) 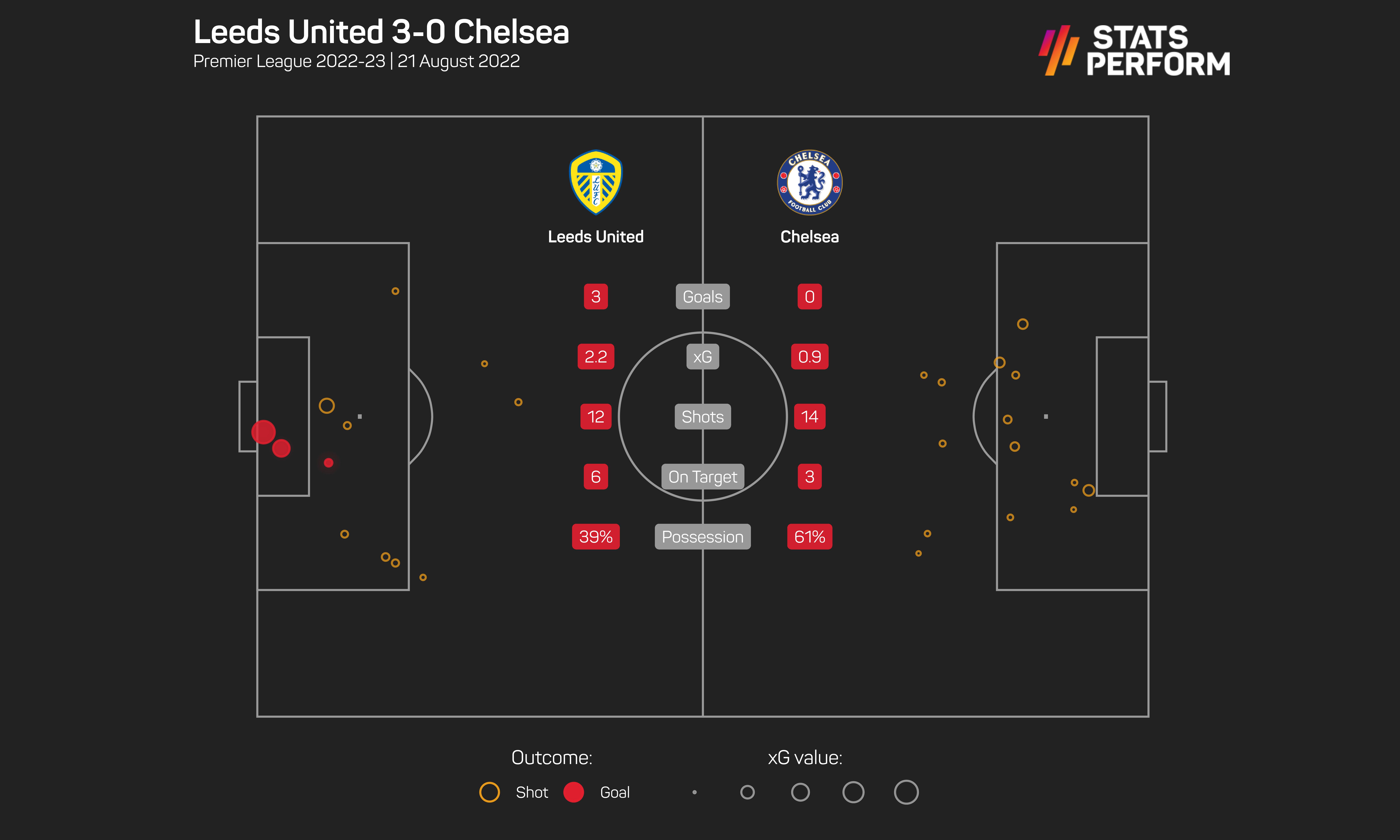 Everton, on the other hand, have underperformed theirs, scoring three times from an xG of 4.8, suggesting the finishing abilities of Richarlison – and, in fairness, Calvert-Lewin – have been missed. Golden opportunities missed by Gordon and Gray in draws against Nottingham Forest and Brentford are glaring examples of where a forward of Richarlison's prowess would likely have done better.

It is a long season, and Tuesday's match between the sides that finished 17th and 16th respectively last season should not be taken as a sure indicator of where these teams will end up. But as for the two absent Brazilians, it is Leeds who are adapting quicker.