Angel Di Maria has been something of a casualty at Paris Saint-Germain since Lionel Messi's arrival, but he is determined to change that.

Angel Di Maria is open to playing in midfield for Paris Saint-Germain as he looks to secure more game time, and believes it could be his best position.

Di Maria has been a star for PSG since joining the Ligue 1 giants from Manchester United in 2015.

The attacker has made 274 appearances for PSG across all competitions, scoring 89 goals and providing a further 107 assists.

Since he joined PSG, no player has played more games than the Argentine, who has also crafted 669 chances, way ahead of Neymar, who ranks second in the squad with 350. Indeed, Di Maria is 41 assists ahead of Kylian Mbappe (66), and only three players have scored more goals in the same timeframe.

Di Maria only signed a new contract in March, he has not been able to nail down a regular starting berth so far this term.

Mauricio Pochettino has a wealth of options at his disposal, and can hardly be blamed for starting Neymar, Mbappe and Lionel Messi, who arrived from Barcelona in August, in a sensational attacking trident.

While the trio have not yet clicked to their full potential, Di Maria has often been the man left out. The 33-year-old has made just 10 appearances this season, scoring twice and setting up a further three goals.

Having started seven games, Di Maria creates 2.42 chances per 90 minutes on average, showing his playmaking abilities are still as good as ever.

With Messi, Mbappe and Neymar needing to be accommodated up front, Pochettino has often gone with a more workman-like midfield three.

However, Di Maria, who was excellent in a deeper role in his final season at Real Madrid in 2013-14, is hoping he gets the chance to show his quality in midfield.

"I think I've already shown that I can play in that position. In fact, it was my best year at Real Madrid, in 2014," Di Maria told RMC Sport.

"The manager knows I can play there, but then it's down to decisions. He's there to decide and we're there to do as best as we can on the pitch, no matter where, in midfield, up front, or elsewhere.

"Those are questions for him, the only thing I've done since I arrived at PSG has been to give it my all when on the pitch.

"It's true that I like to play with the ball at my feet. In 2014 I played in midfield and I felt very good, really happy. With quality players at PSG like Marco [Verratti], Leandro [Paredes] or Gana [Idrissa Gueye] it could work, but those are the manager's decisions." 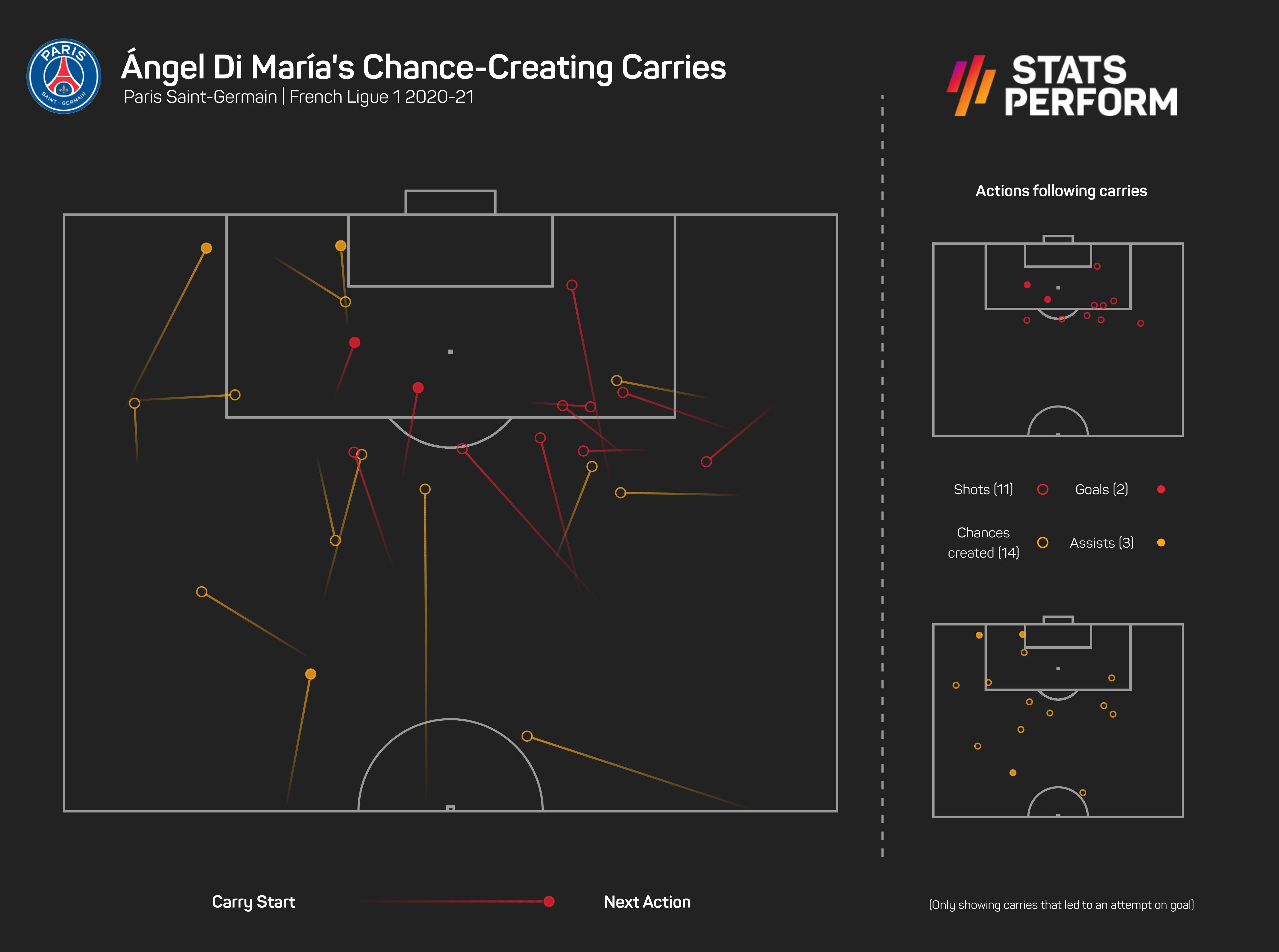 Last season, Di Maria scored two goals, created 14 chances and provided three assists in Ligue 1 from attacking carries, suggesting he may be suited to playing deeper to drive with the ball and supply the attack.

Although frustrated by a lack of regular action, Di Maria understands the reasons.

"When you have those three up front, it makes sense that the first option is to play them, they are the best on the pitch," he added.

"With what they've won, and who they are, it gives all three of them a different status. Or at least to two of them, because Messi is different to the others. He's the best player in the world and he always has to be on the pitch.

"But I'm always trying to give it 100 per cent to get into the starting XI. I know that it's not easy for me given the players in my position. That's why I'm doing as much as I can to maybe find a different option."

Paris Saint-Germain are thought to be keen on acquiring Tanguy Ndombele from Tottenham, but Mauricio Pochettino chose to swerve that topic.

Liverpool, PSG... Newcastle? Where next for Barcelona outcast Dembele?

Signed for €105million in 2017, Ousmane Dembele has never lived up to his promise at Barcelona and is now set to leave the club.

After taking longer than he expected to get over COVID-19, Lionel Messi has not been included in Argentina's squad for their upcoming games.

Luis Suarez's two-year contract with Atletico Madrid expires at the end of this season and he could be ready for a move.

Bayern Munich's Robert Lewandowski gave PSG star Lionel Messi a vote for the FIFA Best Player award, but it was not reciprocated.

Paris Saint-Germain cruised to victory over Brest on Saturday and Mauricio Pochettino sees the victory as something to build on.