Pierre-Emerick Aubameyang was a big focus ahead of Arsenal's trip to Chelsea, but the former Gunners captain endured an unhappy reunion.

Mikel Arteta said Arsenal would "focus on ourselves" ahead of kick-off at Stamford Bridge on Sunday, when asked how his team planned to handle Pierre-Emerick Aubameyang.

Striker Aubameyang spent four years at Emirates Stadium, before his time at the club ended with him being shuffled off to Barcelona in February.

Having propelled Arsenal to FA Cup success in Arteta's first half-season at the helm in 2020, club captain Aubameyang was rewarded with a new contract. Yet the following campaign brought just 14 goals and, by December last year, Aubameyang was out of the picture having fallen out with, and out of the favour of, Arsenal's manager.

After his short-lived, but successful, spell at Barcelona, Aubameyang is back in the Premier League with Chelsea, and the focus ahead of Sunday's London derby was on how he would match up against his old club.

Sixty-four minutes, eight touches, five completed passes and just one shot, which was blocked, later, we had our answer – Aubameyang subbed off by Graham Potter, a minute after Arsenal had taken the lead thanks to Gabriel Magalhaes' goal, with the Gunners holding out to return to the Premier League's summit.

Arsenal have found Stamford Bridge a happy hunting ground in recent seasons. They are unbeaten at Chelsea in the top flight since December 2018, and have won on their last three league trips to the home of their London rivals.

They triumphed 4-2 in the corresponding match last term, which was the last time Chelsea had lost on home turf, but the Blues were by far second-best on Sunday.

Chelsea, beaten 4-1 by Potter's former side Brighton and Hove Albion last week, managed just five attempts at goal, their fewest in a Premier League game at Stamford Bridge since September last year, in a loss to Manchester City. 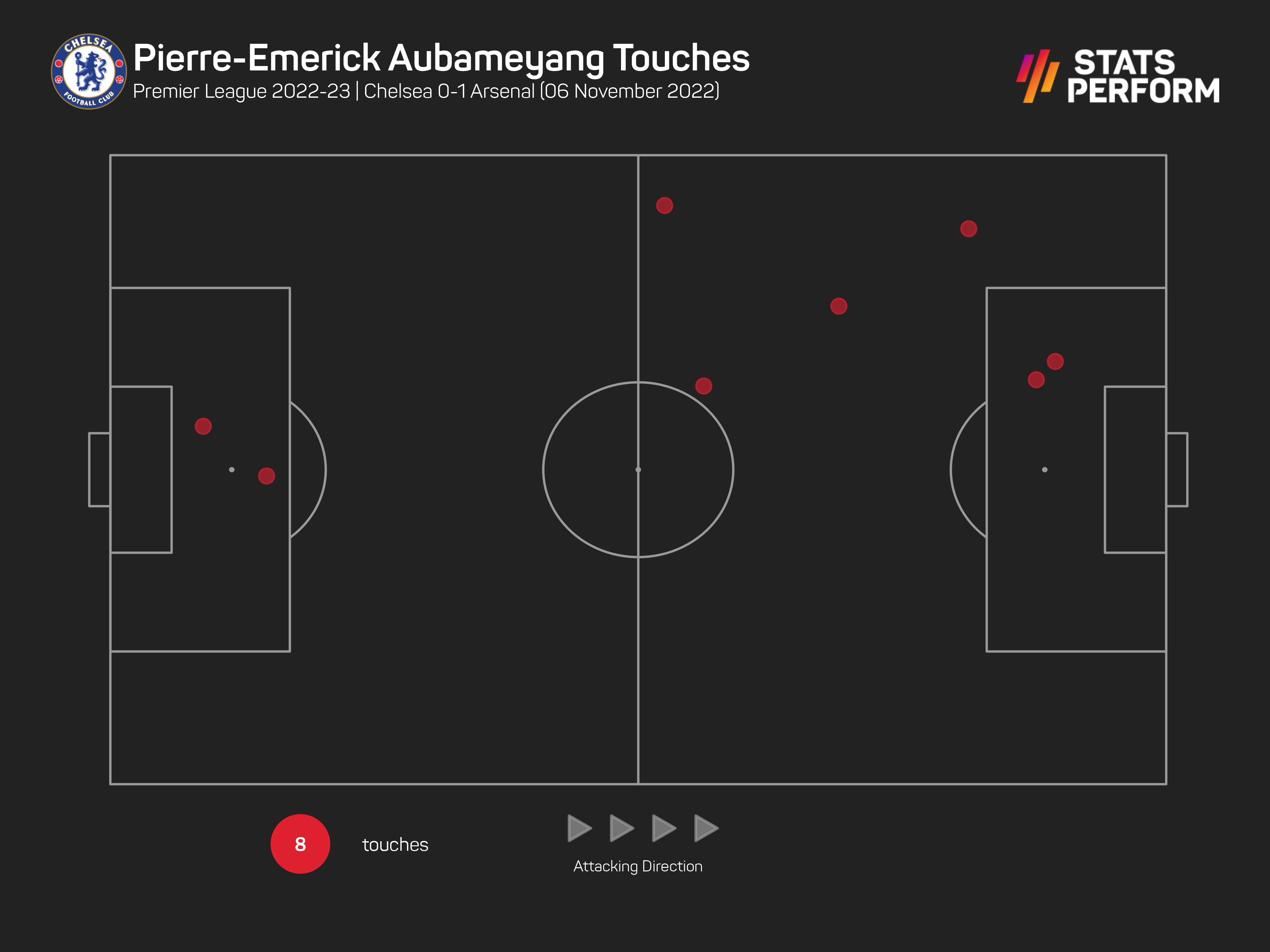 Aubameyang scored 68 goals in 128 Premier League games for Arsenal, including one against the Blues in December 2019, but he never threatened to become just the second player to score for both sides in this fixture in the Premier League (excluding own goals), after Cesc Fabregas.

His performance summed up Chelsea's blunt attack, with Mason Mount managing only one attempt and creating just one chance, while Kai Havertz and Raheem Sterling also struggled.

Arsenal, in contrast, had 14 shots, and while only two hit the target, they did what title contenders do and ground out a big result.

Gabriel Jesus was brought in to fill the void left by Aubameyang, and where Chelsea's 33-year-old centre forward floundered, the Brazil international excelled at the other end.

Jesus might not have scored in the league since the start of October, yet the 25-year-old's influence cannot be ignored.

He had three shots, as many as Chelsea's starting front four combined, and 62 touches. Only defenders Cesar Azpilicueta and Thiago Silva (71 and 69) had more on Chelsea's team.

Jesus' 26 duels led the match, with no player competing for more aerials (six). A combative display saw the Arsenal number nine concede a joint-game-high three fouls, but he also won four, more than any other player on the pitch, while only Bukayo Saka (three) created more chances than the ex-Manchester City striker. 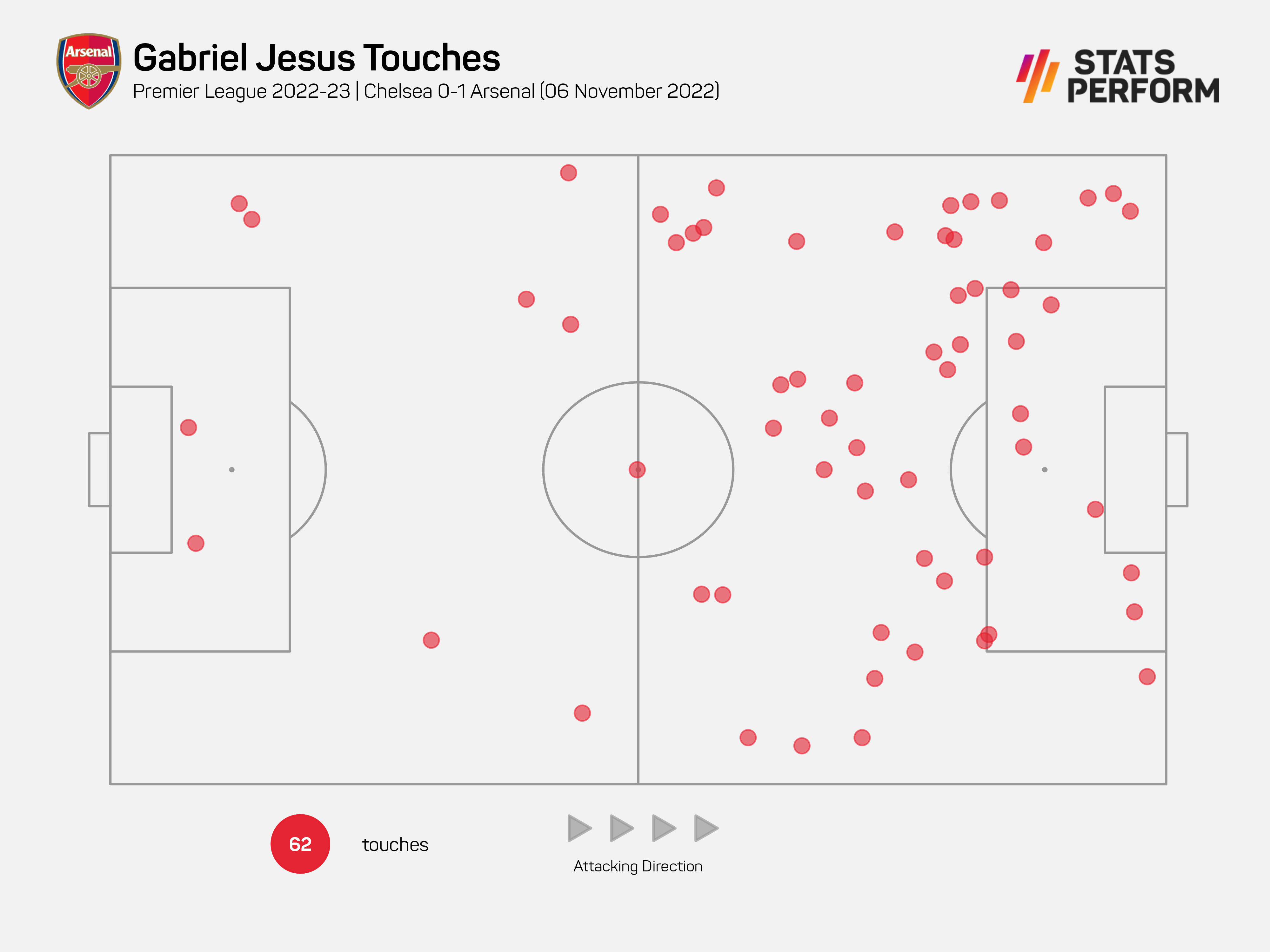 Arsenal, the real deal after all?

Chelsea did not lose back-to-back Premier League games at all under Potter's predecessor Thomas Tuchel, but the Blues are now without a win in four top-flight matches.

While Chelsea are undoubtedly struggling to click into gear, take nothing away from Arsenal. This team are purring, and Blues owner Todd Boehly should look to the Gunners' example of sticking with a young coach, with a defined project, as to just what can happen with sustained support.

City's late winner against Fulham on Saturday could have dealt Arsenal's confidence a blow, but instead they made another statement of intent.

"From the start until the end, we deserved to win, we were the much, much better team," Granit Xhaka rightly said in his post-match interview with BT Sport.

"We are so happy, we are doing everything the coach is telling us. These are the results."

Arsenal have won three consecutive Premier League games against fellow 'big six' opposition for the first time since February-April 2012, while the Gunners – on 34 points from their 13 matches – are the first side to win 10 top-flight away games at Chelsea.

They remain the only side to have scored in every top-flight match this term, while no teams have kept more clean sheets than the Gunners (six).

There's one potential complication for Arsenal, of course. The World Cup break is looming, and who knows if this momentum will be here by the time the league resumes in late December.

For now, though, their fans, players and previously much-maligned manager – who marked his 150th game in charge in style – can bask in deserved adulation.

Croatia may have secured their place in the World Cup quarter-finals, but their fans' behaviour has come under scrutiny.

Messi is 'human' and 'can miss' penalties, says Netherlands' Noppert ahead of World Cup quarter-final

Lionel Messi has scored and missed from the spot at this World Cup, and Andries Noppert feels ready if Friday's game goes the distance.

Despite being dumped out before the quarter-finals by Morocco, Spain still have a bright future if they can adapt, says Michel Salgado.

Flick to remain as Germany coach despite World Cup woe

Despite seeing his side eliminated at the group stage, Hansi Flick will remain as Germany coach ahead of a home Euro 2024 campaign.

Lovren 'does not see any disrespect' in Brazil's dancing goal celebrations

Brazil's goal celebrations have been condemned by some, but Dejan Lovren does not feel they are performed in bad taste.

Chris Paul is set to play against the Boston Celtics as the top-ranked teams in the Eastern and Western Conferences do battle.

Following the invasion of Ukraine, Russia and Belarus have been sanctioned by the IOC, with no plans to overturn their bans.