Despite leading the NBA Finals 2-1, the Phoenix Suns have an issue to fix ahead of Game 4 with the Milwaukee Bucks.

The Phoenix Suns enter Game 4 of the NBA Finals with a difficult question to answer: how can they contain Milwaukee Bucks star Giannis Antetokounmpo when Deandre Ayton is not on the court?

It came behind a scintillating 41-point performance from Antetokounmpo, the two-time league MVP delivering a performance few could have foreseen when he hyperextended his knee in Game 4 of the Eastern Conference Finals.

Antetokounmpo also had 13 rebounds in putting up a decisive double-double, taking advantage of another knee injury that could well prove a turning point in the series.

The Suns were without Dario Saric, the backup to starting center Ayton, in Game 3 because of a torn anterior cruciate ligament suffered in Game 2.

The plus-minus numbers for Kaminsky (-12), Craig (-12) and Nadel (-5) tell their own story. Milwaukee dominated when Ayton was not out there, outrebounding the Suns 47 to 36.

In this series, when Ayton has been on the court, the Bucks average 110.0 points per 100 possessions, compared to 125.3 with the former first overall pick off the floor.

Milwaukee's rebounds per 100 possessions with Ayton on the bench jump to 50.3 from 46.8 when he plays.

Similarly, the Bucks are substantially more effective from the three-point line without the presence of Ayton to deal with, converting 46.4 per cent of their shots from beyond the arc in the series compared to 34.7 when he is trying to stop them.

For all the attention lavished on Devin Booker and Chris Paul, Ayton arguably stands as the key player for the Suns if they are to claim a first NBA title.

Should there be a repeat performance in Game 4 on Wednesday when Ayton is forced to rest, then Antetokounmpo will have an excellent chance to improve his Finals average of 34.3 points per game and, more importantly, help the Bucks level the series. 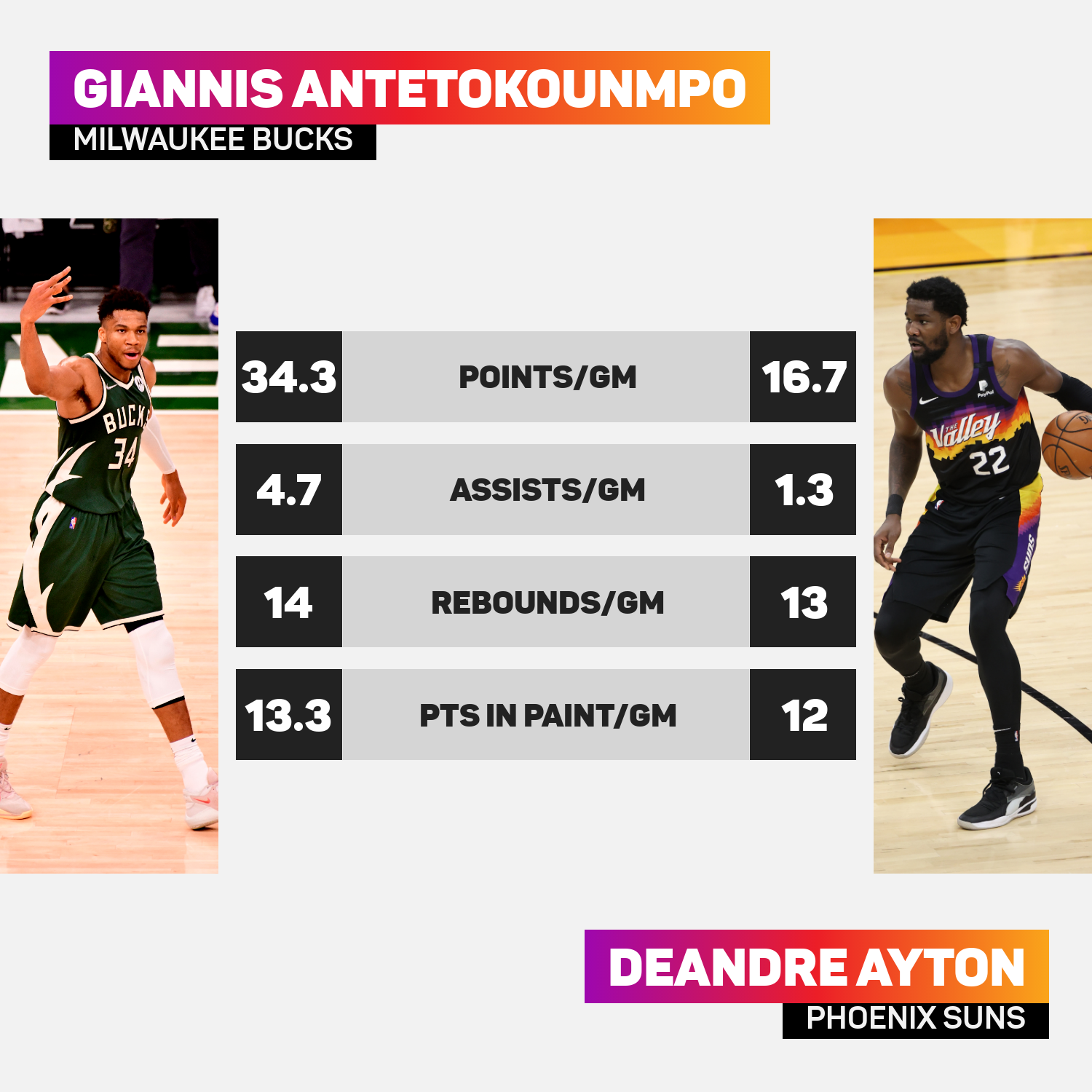 Another player who can capitalise on the blow the Suns have suffered to their big man depth is Lopez, the Bucks center who is averaging 6.7 points in the paint per game in the series – behind only Antetokounmpo and Ayton.

Lopez has produced double-digit points in four of his past five outings in this postseason, including a 33-point effort against the Atlanta Hawks in Game 5 of the Eastern Conference Finals as the Bucks prevailed without the injured Antetokounmpo. Third in effective field goal percentage (60.9) among centers with 30 attempts or more this postseason, Lopez could compound the impact of Saric's absence for the Suns.

That his Finals numbers are inferior to those of Antetokounmpo is largely reflective of the point-scoring and creative burden taken on by Booker and Paul respectively. However, Ayton is the Suns player most should have their eyes on in Game 4.

He has averaged 35 minutes in this series compared to 37.7 for Antetokounmpo; will Williams up Ayton's time on the court in response to the events of Game 3 when he rested? Or will the Suns coach find a way to minimise the damage during Ayton's time on the bench? The answers could eventually decide the destination of the Larry O'Brien Trophy.