Novak Djokovic has leapt from one bubble into another as he attempts to become the first man in tennis history to win all four grand slams and Olympic gold in the same year.

The only men to have won each of the singles majors across their careers, plus Olympic gold, are Andre Agassi and Rafael Nadal, and now Djokovic aims to move to the brink of winning all five in his remarkable 2021 season.

Fresh from dominating at Wimbledon, and with the Australian and French Open titles already in the bag, Djokovic heads into the Tokyo Games as a red-hot favourite, seeking to set himself up to complete a historic campaign at the US Open.

Naomi Osaka will enter the Games with almost as much expectation behind her too, the reigning US Open and Australian Open champion eyeing glory for hosts Japan.

But tennis has thrown up a host of shock results in its short Olympic history. Here, Stats Perform looks at the sport's place in the Games. 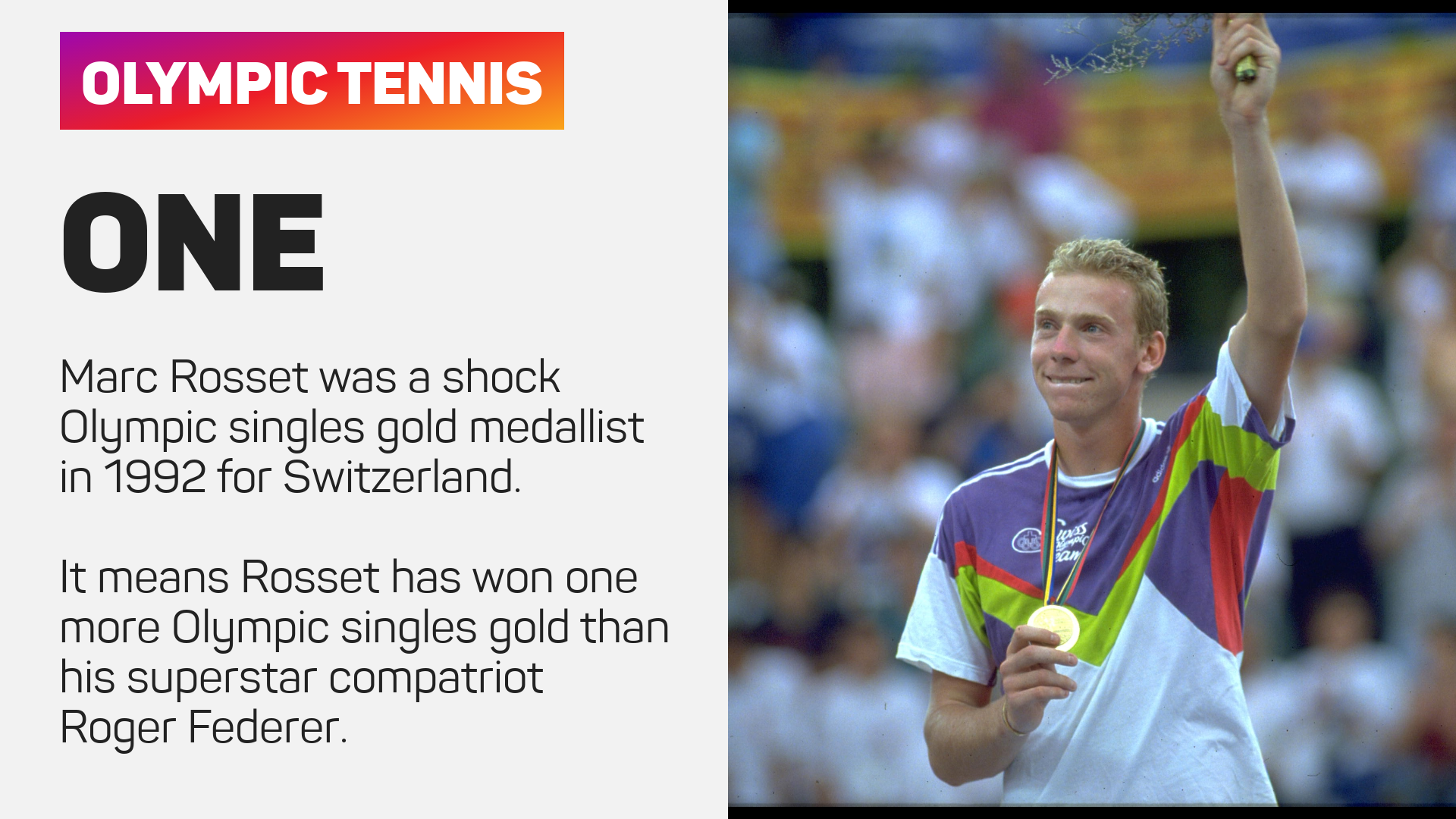 WHO'S IN, WHO'S OUT, AND WHAT DOES ALL THIS MEAN?

Serena Williams, Roger Federer and Rafael Nadal have all opted out of the Olympics.

Williams made her mind up prior to suffering a leg injury at Wimbledon, although she is already a member of the career Golden Slam club.

Federer reached his decision after revealing he also suffered a physical setback at the All England Club, and Nadal elected to take a two-month break after relinquishing his French Open title.

Don't expect to see them again at the Olympics, given Williams and Federer will be pushing 43 by Paris 2024, and Nadal will be 38. Federer won a doubles gold with Stan Wawrinka in 2008, but his singles peak was the silver medal he earned in 2012, Andy Murray crushing Swiss hopes in the final at Wimbledon.

Dominic Thiem, Bianca Andreescu, Nick Kyrgios, Simona Halep, Angelique Kerber, Victoria Azarenka and Denis Shapovalov are among other confirmed absentees, with fitness issues a factor for some, less so for others.

The COVID-19 crisis is a mitigating factor in why so many stars are staying away, and directly responsible in the case of some players, such as Britain's Johanna Konta and Dan Evans, who both tested positive recently.

But tennis was only fully restored to the Olympic programme in 1988, after being dropped post 1924, and if players are seen to be favouring the grand slams over the Games, that is not such a great look for the sport.

At a time when the International Olympic Committee has shown it is willing to shake up the sports on its programme, tennis could perhaps do with a headline-making Tokyo 2020.

Murray, the two-time defending men's champion, will target an improbable hat-trick. A hat-trick for the injury-hit former world number one would be a sensation, and Osaka landing gold in the women's tournament would surely be one of the great moments of the Games. 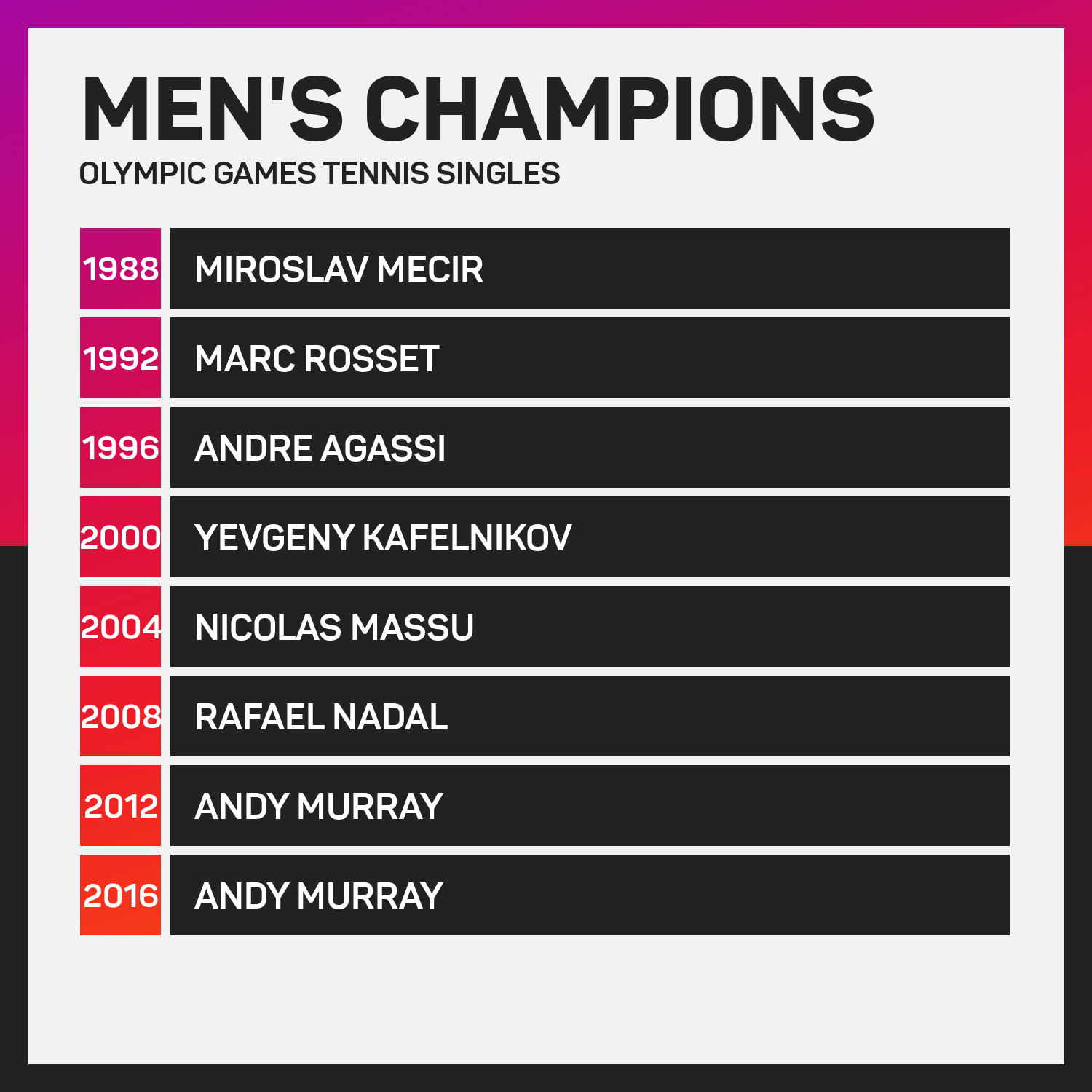 DJOKOVIC FOLLOWING IN THE FOOTSTEPS OF GRAF

When Steffi Graf beat Gabriela Sabatini in the women's singles final at Seoul, it completed what we know now as the calendar 'Golden Slam'. She had already won the Australian Open, French Open, Wimbledon and the US Open, and the feat of the then 19-year-old West German has yet to be repeated.

Now Djokovic is three-fifths of the way to a similar clean sweep of the majors and the Olympics, with the US Open getting under way on August 30 in New York.

He teetered on not going to Tokyo, and perhaps he is to some extent endangering his chances at Flushing Meadows by spending more time travelling and enduring bubble life, while others rest up.

But Djokovic is a fiercely proud Serbian and could not resist a great chance of winning gold for his country. He landed bronze at the 2008 Games in Beijing but in 2012 he lost to Juan Martin del Potro in the bronze-medal match, and a cruel draw at Rio four years later saw him assigned Del Potro in the first round.

Top seed Djokovic bowed out in two tie-breaks to the powerful Argentinian, describing the outcome as "one of the toughest losses in my career".

There is no danger of a hat-trick of defeats to Del Potro, which may help Djokovic. Del Potro has been battling for two years to get back to fitness, undergoing four rounds of right knee surgery in a bid to get back on tour. 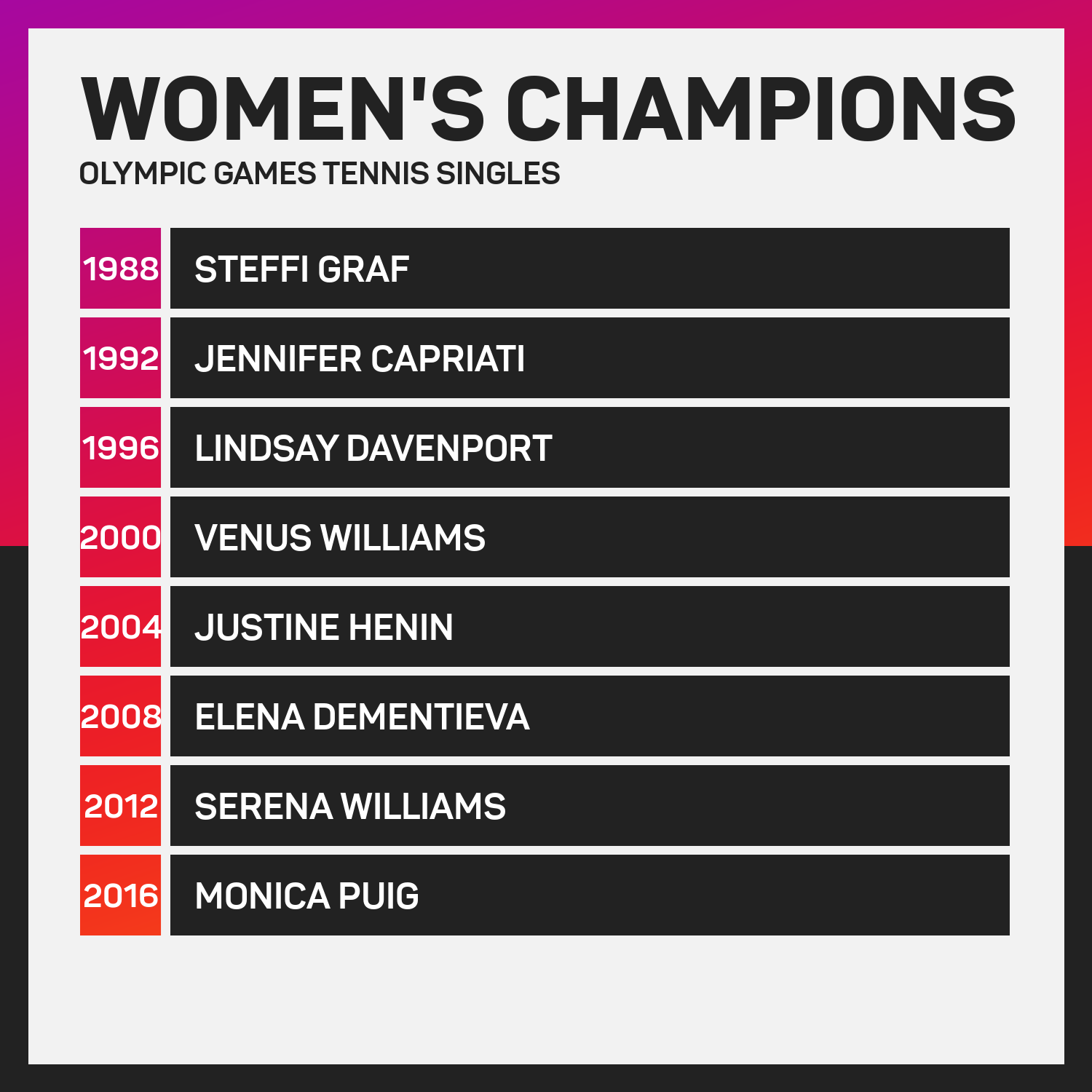 RAISING THE BAR AT THE OLYMPICS

How the Olympic village functions in Tokyo will be distinctly different to at previous Games, given the pandemic restrictions in place that could be a real buzzkill.

But in the past there have been countless cases of athletes becoming inspired by their surroundings and going on to perform above their usual level.

It can be a party village, and it can also be an eyebrow-raising experience as global superstars rub shoulders with competitors who might struggle for recognition in their home towns. More than anything, the shared team experience, fighting for a collective cause, can make a middling athlete believe they can be great.

Monica Puig was a massive tennis outsider in 2016 but the then world number 34 won the women's singles, stunning Angelique Kerber in the final after beating Petra Kvitova and Garbine Muguruza en route. That gave Puerto Rico their first ever Olympic gold medal.

In 1992, a tournament that featured the likes of Pete Sampras, Jim Courier, Stefan Edberg and Boris Becker finished with a staggering final match-up of Marc Rosset versus Jordi Arrese, who in his home city of Barcelona was edged out 8-6 in the fifth set by the Swiss world number 43. Nobody would have predicted that head to head for gold.

In the 1996 Atlanta Games, Lindsay Davenport, who had just turned 20, took inspiration from being the daughter of an Olympian, with dad Wink having played volleyball for the United States at Mexico City in 1968.

Davenport was beginning to make an impact on the WTA Tour but was only the ninth seed at the Olympics, yet she swept through the rounds before sinking Arantxa Sanchez Vicario 7-6 (10-8) 6-2 in the final.

"It's like one of those things I look back on and I'm like, 'Was that me?'," Davenport told The Tennis Podcast last year.

"It doesn't seem like it was real. I'd made the transition to the pro tour pretty well, but I liked hanging out between eight and 16 in the rankings. I was very insecure, unsure of what could I do. I liked doing well but I wasn't sure I wanted to do too well because it seemed really overwhelming to be one of those top players.

"Here I go at 20 years old to Atlanta for two or three weeks, in a setting that seemed so comfortable. Look at all these athletes, you have all different shapes and sizes, you have players that are really working hard but have so much in common and you get to hang out with them, breakfast, lunch, dinner in the village."

Davenport was a future world number one and three-time grand slam singles champion, but at this point in her career being an American at an Olympics in the United States was just a thrill.

"You're sharing this with your team-mates who are some of my best friends in Mary Joe Fernandez, Monica Seles. It was the best time ever," she said.

"By the time the tournament actually started we were like, 'Yeah, I'll go play my match and then we'll go back to the village and we'll hang out', and everything went so fast in those few weeks.

"And there I was left standing, winning at the end because I was so incredibly happy and excited with everything that was going on. I kind of forgot what was my job.

"When it became a reality of even just making the team in '96, it was so huge also for my family with having a second generation Olympian."