Matthijs de Ligt, who was sent off as the Netherlands lost to the Czech Republic, felt he was to blame for the result.

Matthijs de Ligt accepted responsibility for the Netherlands' Euro 2020 exit after he was sent off in the 2-0 last-16 defeat to the Czech Republic.

The Juventus defender was dismissed 10 minutes into the second half after a VAR review for a deliberate handball that denied Patrik Schick a clear goalscoring opportunity.

Goals from Tomas Holes and Schick, his fourth of the tournament, secured a memorable win for Jaroslav Silhavy's side as they secured a quarter-final clash with Denmark in Baku.

The Netherlands were far from the free-flowing side that eased through the group phase, Frank de Boer's men becoming the first Dutch side since at least 1980 to go through a Euros or World Cup game without managing a shot on target.

Yet De Ligt felt his error when judging a bouncing ball, and the handball that followed, was the main reason for their defeat.

"Of course, it feels bad. We basically lost the match because of what I did. In hindsight, I shouldn't have let the ball bounce," he told NOS.

"Ultimately, that moment changed the game. I saw how the team fought in the final minutes and I'm very proud of that, but I do feel responsible.

"We had some chances in the first half. No shots on target, but chances. I didn't really feel like they were much better.

"Of course, this hits hard. Playing in a tournament is always a golden opportunity. If you're then knocked out like that, it's even more painful." 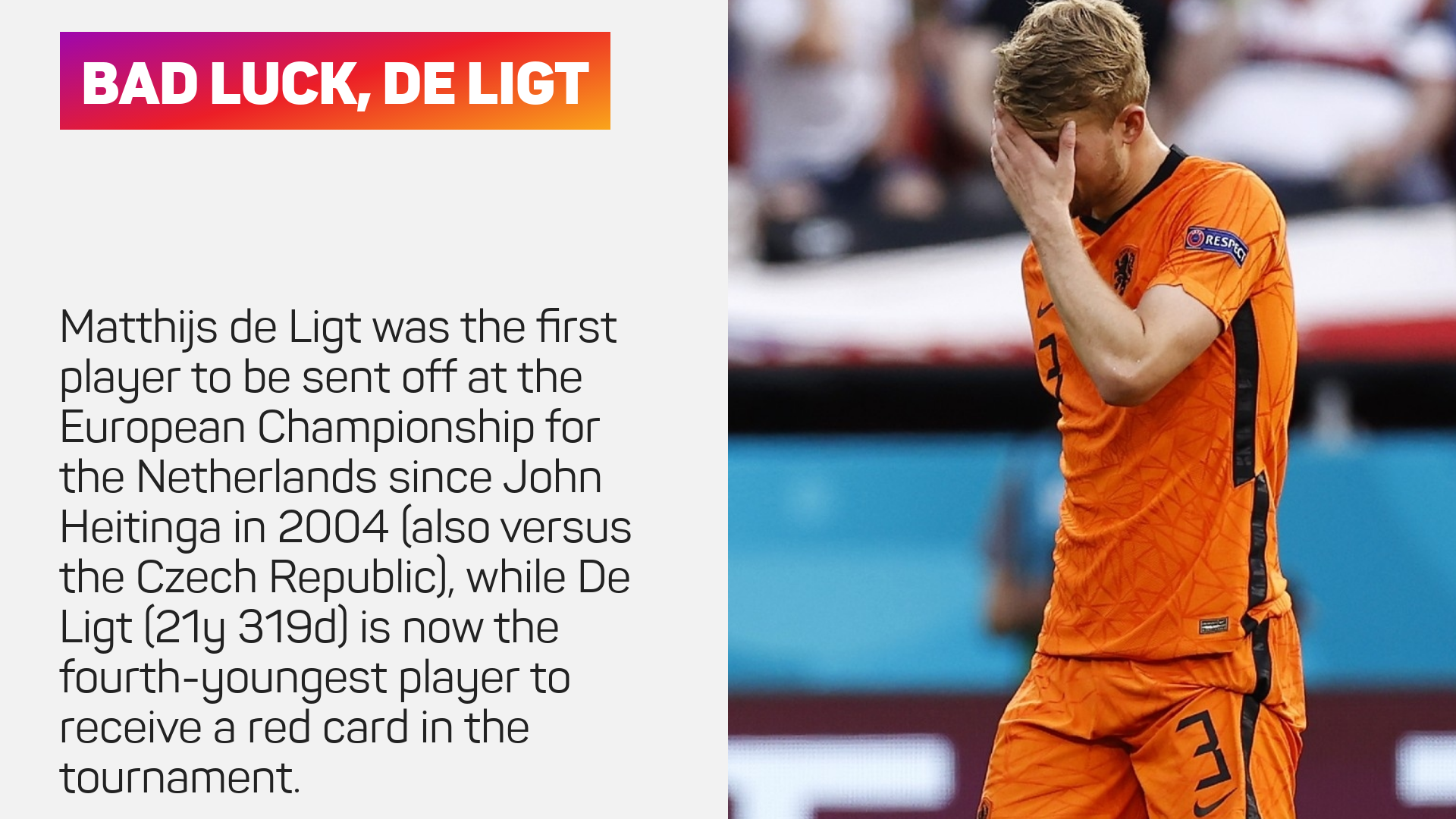 Midfielder Frenkie de Jong was surprised at his side's insipid display, particularly after their exploits over the first three matchdays.

"It was almost as if we were tired, although I have no idea why," said the Barcelona man. "We really wanted to win it. For some of the boys, this was the biggest game of their careers so far.

"It's not that we weren't prepared tactically. We were focused, and we certainly didn't underestimate them. We just couldn't get our game going. Sometimes you have days like that."

After failing to meet the Netherlands' target of reaching the quarter-finals of Euro 2020, manager Frank de Boer has stepped down.

Matthijs de Ligt, who was sent off as the Netherlands lost to the Czech Republic, felt he was to blame for the result.

Georginio Wijnaldum found it difficult to explain why the Netherlands struggled against the Czech Republic even before their red card.

Matthijs de Ligt was initially colossal for the Netherlands against the Czech Republic, but team-mates floundered after his clumsy red card.

The Netherlands had Matthijs de Ligt sent off before conceding twice in the second half to lose their last-16 clash with the Czech Republic.