The Netherlands are unbeaten in three games under Louis van Gaal, scoring 11 goals, but the veteran coach is after even more from his side.

Louis van Gaal insisted "it will only get better" for the Netherlands after turning on the style in Tuesday's 6-1 World Cup qualifying win over Turkey in Amsterdam.

Memphis Depay scored his first international hat-trick and was joined on the scoresheet by Davy Klaassen, Guus Til and Donyell Malen in a dominant display from the Dutch.

The Netherlands opened the scoring inside 54 seconds and were three up with 38 minutes played, the fastest they have led 3-0 in a competitive match in a decade.

Turkey lost Caglar Soyuncu to a red card before half-time but profited from a mix-up at the back to add a late consolation through Cengiz Under, though it was still their heaviest defeat since losing 8-0 to England in 1984.

Oranje have won two and drawn one of their three games since van Gaal replaced Frank de Boer, scoring 11 goals in the process, yet van Gaal can see room for improvement.

"If you win 6-1, you can expect a lap of honour," he told NOS. "This is what I signed up for, for the competition.

"I projected my vision onto the players. I did a lot of what the players wanted. I said after the Norway and Montenegro games that it was a fantastic group, and I'm saying that again now.

"They boys have lasted the whole game, which is not normal. The first goal was college football. We haven't worked on that in training, it just comes out.

"I'm dealing with a very happy group. I have passed the first threshold and I'm very happy with it. From now on it will only get better. We were too careless in possession." 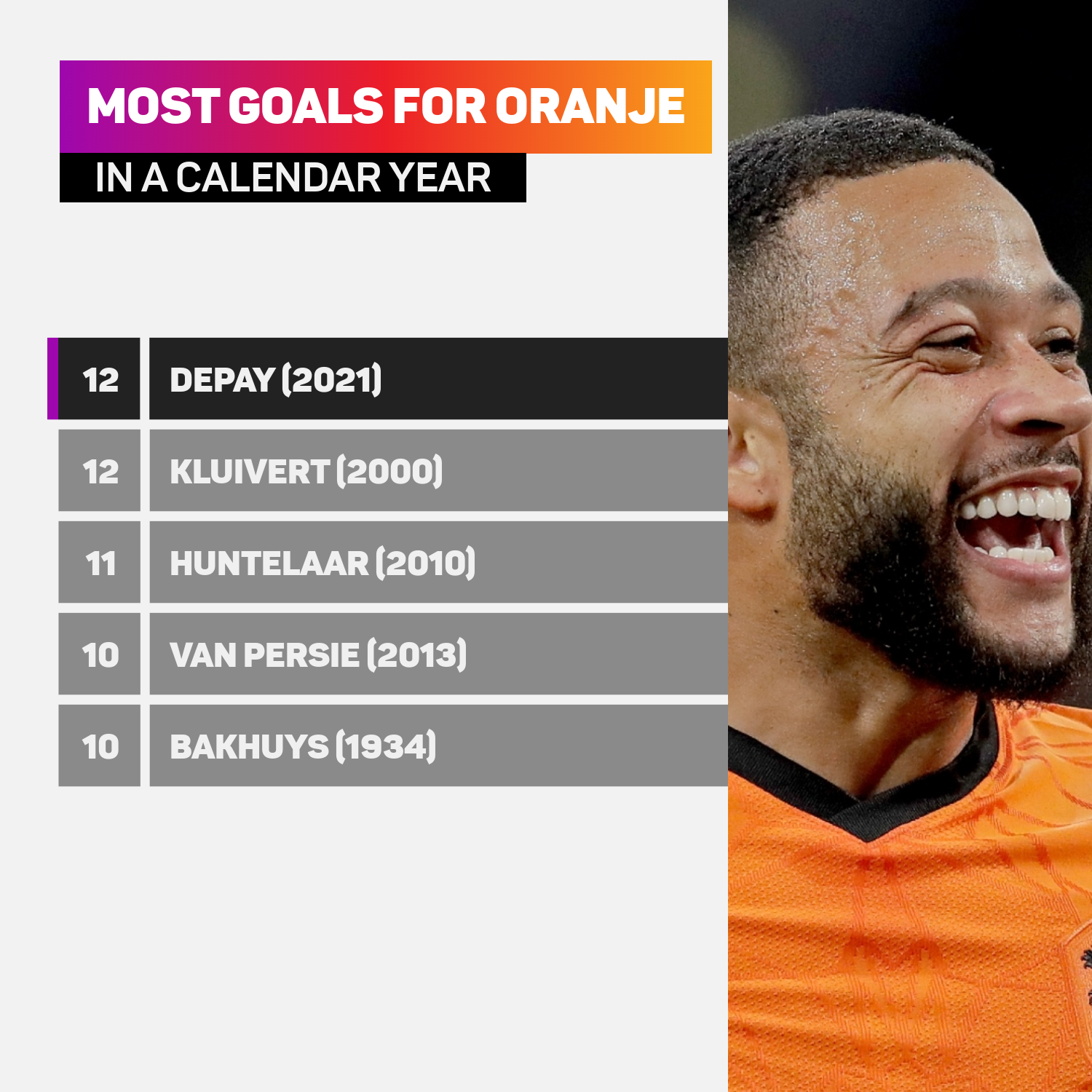 Depay has scored five goals for the Netherlands in their last two games and has 12 in total for 2021, equalling the record for goals in a calendar year set by Patrick Kluivert in 2000.

The Barcelona forward is now joint eighth on Oranje's all-time top-scorers list, level with Johan Cruyff and Abe Lenstra with 33 goals in 71 caps.

Depay, who made his debut under in the first of van Gaal's three spells in charge in 2013, is now looking to climb further up that legendary list.

"Cruyff and Lenstra are legends," Depay told NOS. "They have meant so much to the Dutch national team and put our football on the map.

"You can't compare anyone with that. I now have to make sure that I remain important for the team with my game and with my goals.

Proud captain today, great performance all round. What a great atmosphere too! Now time to head back to Liverpool and prepare for a tough couple of weeks aheadpic.twitter.com/mCy3paPdul

The only blemish for the Netherlands came in added time when Virgil van Dijk failed to get to a short Justin Bijlow pass under pressure from Halil Dervisoglu.

Under walked the ball into an empty net and van Dijk stayed on the ground after being caught by Dervisoglu in what appeared to be an injury scare for Liverpool.

However, the centre-back – who led the way with 88 passes at the Johan Cruijff ArenA – has provided a positive update on the ankle issue.

"I'm lucky. I'm already over it," he said. "Maybe because I am so big, they think I am acting.

"But all-in-all it was a very nice evening. There is no doubt in our minds that the next two games are very important in a month's time."

The Netherlands are top of Group G with four games to go, ahead of second-placed Norway – who they still have to face at home – on goal difference.

Vinicius Junior and Karim Benzema scored as Real Madrid came from behind to scramble a win away at Valencia on Sunday.

The 2021-22 PGA Tour season opened with Max Homa's name atop the leaderboard in Napa, California.