Thomas Tuchel was delighted with the all-round display of Saul Niguez as the Chelsea midfielder impressed in Tuesday's EFL Cup tie with Southampton.

Chelsea required a penalty shoot-out for the second round running in the competition, as Reece James' cool spot-kick ultimately sealed the Blues' progression to the last eight.

James' penalty sealed a 4-3 shoot-out win after Theo Walcott and Will Smallbone failed to convert their efforts following a 1-1 draw at Stamford Bridge.

The five-time champions have now won all three of their matches against Southampton in the competition. The last such meeting was back in 1997-98, with Chelsea going on to lift the trophy that season.

Saul had played only once – against Malmo in the Champions League last week – since featuring against Aston Villa in the previous round, yet the Atletico Madrid loanee, who was taken off at half-time in his sole Premier League appearance, completed the full game.

He went close to opening the scoring with an excellent header six minutes in, forcing Fraser Forster into a top-class save.

Having seen another header saved just before the hour, Saul then had two attempts from the edge of the area in quick succession, with a crisp strike flashing just wide before Forster again denied the Spain international, diving to his right to keep out a shot that was dipping in. 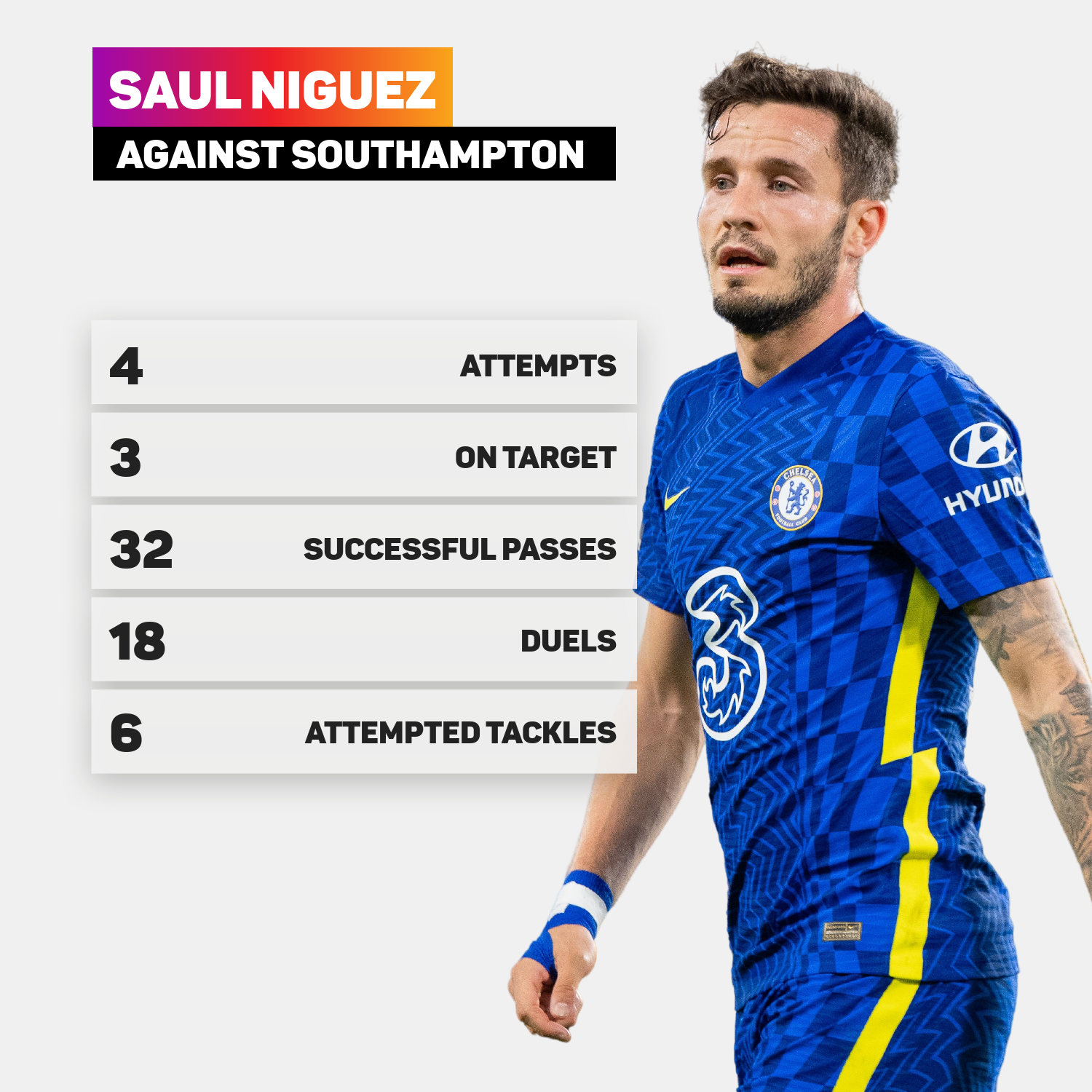 Saul finished on four efforts in total, with a joint game-high three on target, and along with midfield partner Mateo Kovacic, the 26-year-old went in for a game-leading six tackles, completing three, though he did concede four fouls.

It was a performance that left Tuchel highly impressed.

"[He had] a good match, a huge step in the right direction for him," Tuchel told reporters.

"I am happy. We thought maybe he would be struggling with the intensity at the 70th minute but he got better and better, had chances and shots.

"We thought let's keep him and give him the minutes. It was a good step for him."

Tuchel explained that Chelsea's options were limited after three players who could have started – Cesar Azpilicueta, Ruben Loftus-Cheek and Andreas Christensen – were unable to train ahead of the match.

"Azpi injured his shoulder, let's see," Tuchel said. "We hope he will be fit, he is a tough guy. Maybe he will be fit Saturday [for the game against Newcastle United]. Ruben has a pain in his hip, in his joint. Andreas had tooth surgery and should be fine to train on Thursday."

Chelsea had 23 shots in total, with 14 on target – Forster pulling off 13 saves in total and only beaten by Kai Havertz's header. Southampton, who equalised through Che Adams, had plenty of chances themselves, however, with Kepa Arrizabalaga making six stops.

"It was an intense match of football, nice to watch for the spectators," Tuchel added. "It was an open fight, an intense match. We did a good shootout, a lot of quality. I liked the energy today, it was a good game."

Enzo Fernandez has been one of the breakout stars in world football since arriving at Benfica in June, earning a World Cup call-up.

Marcus Rashford starred in England's 3-0 win over Wales, and Luke Shaw wants to see consistency from his Manchester United club-mate.

Tyler Adams commended the United States for "battling" for each other during Tuesday's vital 1-0 win over Iran.

Stephanie Frappart will be the first woman to referee a men's World Cup game when she takes charge of Germany and Costa Rica on Thursday.

Christian Pulisic's goal was enough to fire the United States to a decisive win over Iran on Tuesday, keeping their World Cup hopes alive.

Iran are out of the World Cup after losing 1-0 to the United States, but Carlos Queiroz was proud of his players' performance.

Marcus Rashford sits joint-top of the World Cup's top scorers after a brace against Wales on Tuesday for England.

Against his former team, Norman Powell's 32 points helped the Clippers to victory, with coach Ty Lue full of praise.

Rory McIlroy has emerged as a figurehead for the PGA Tour this season with both his game and his actions, earning Tiger Woods' plaudits.