Real Madrid winger Takefusa Kubo was on target again as hosts Japan eliminated France from the Tokyo Olympics men's football tournament with a 4-0 win on Wednesday.

Kubo netted in Japan's first two Group A games and gave Madrid another reminder of his quality by opening the scoring against France in Yokohama.

In doing so, the 20-year-old became the first Japanese player to score in each group-stage match at the same Olympic tournament.

Hiroki Sakai doubled Japan's lead prior to half-time before Koji Miyoshi and Daizen Maeda completed the rout, either side of Randal Kolo Muani being sent off.

Japan advance as the only side with a 100 per cent record, whereas France – who had Timothee Pembele and Andre-Pierre Gignac in their line-up – are out at the first stage.

"The tournament was really difficult for us, because we are young players and these are the first games we have played with the team," France midfielder Alexis Beka Beka said.

"One of the big differences was the other teams knew each other much better. But it's all about the details. The game is never finished."

Mexico recovered from their loss to Japan last time out by beating South Africa 3-0 in a game in which both sides had a player sent off, seeing them through in second place ahead of France. 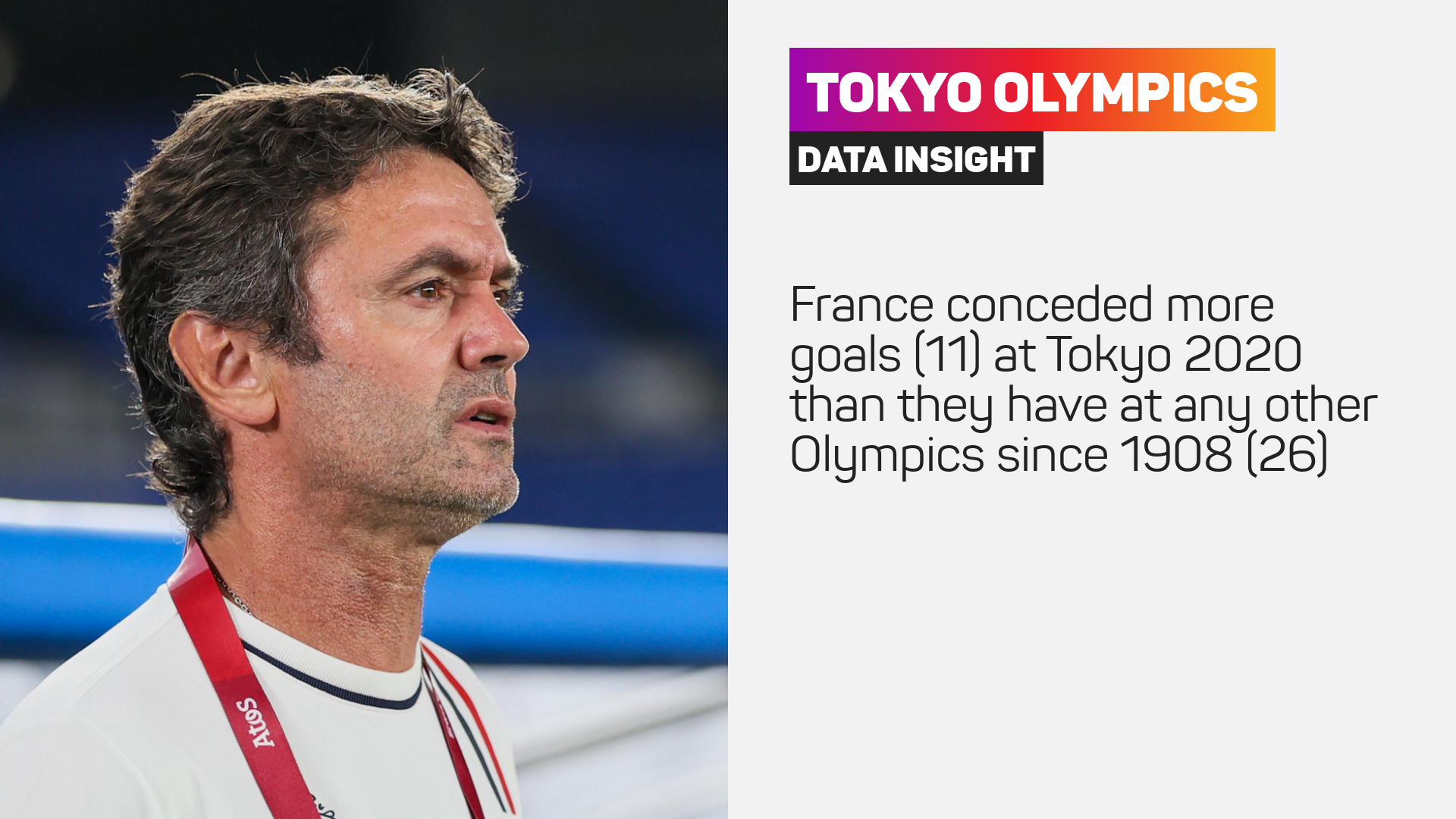 Spain were not perfect in the pool phase, having been held for the second time in three games in Wednesday's clash with Argentina, but they still went through as Group C winners.

It is the first time La Roja have achieved that feat at the Olympic Games since the likes of Pep Guardiola and Luis Enrique went on to win gold in Barcelona in 1992.

Tomas Belmonte's late equaliser came against the run of play, but it was not enough to prevent 2004 and 2008 gold medallists Argentina crashing out early on.

London 2012 quarter-finalists Egypt finished level on four points with Argentina after beating Australia 2-0 and progress to the last eight, where heavyweights Brazil await, by virtue of a superior goal difference.

New Zealand picked up the point they needed against Romania in a goalless draw to advance to the quarter-finals of the competition for the first time.

Goalkeeper Michael Woud redeemed himself for his horror show in the loss to Honduras by making a string of stops against Romania, who would have advanced with a win.

"It really came down to desire tonight," said OlyWhites head coach Danny Hay. "The boys really dug deep and showed a lot of that.

"I'm really proud of the performance. It's historic and we look forward to a quarter-final for a New Zealand men's team."

New Zealand also needed a favour from South Korea, who followed up a 4-0 win against Romania with a 6-0 victory over Honduras on Wednesday en route to topping Group B.

Hwang Ui-jo scored three of the goals, two of those from the penalty spot, and a showdown with Mexico is up next for rampant South Korea for a place in the semi-finals.

Germany will not get the opportunity to match or better their silver medal from Rio in 2016 as a 1-1 draw with Ivory Coast saw their opponents through at their expense.

Nothing less than a win would do for Stefan Kuntz's men but they fell behind to a Benjamin Henrichs own goal with 67 minutes played.

While Eduard Lowen's impressive free-kick did set up a tense finish in Miyagi, Germany were unable to find a winner and are on the plane home.

Ivory Coast will now take on Spain, the last European nation standing, in the quarter-finals.

Also through to the knockout stage are reigning champions Brazil after seeing off Saudi Arabia 3-1, with Richarlison's late double adding to Matheus Cunha's first-half opener.

Erling Haaland has been outstanding since joining Manchester City, but Arsenal continue to lead the Premier League champions by five points.

American Patrick Reed enjoyed pushing Rory McIlroy all the way in Dubai and defended himself following an incident on Sunday.

Eddie Howe watched Diego Simeone's Atletico Madrid train before taking the Newcastle United job, but he was not taught of the "dark arts".

Steve Smith collected the biggest prize in Australian men's cricket for a fourth time on Monday, seeing off competition from Travis Head.

A hamstring injury sustained by Ronan Kelleher has given Tom Stewart the chance to link up with the Ireland squad in Portugal.

Moises Caicedo wants to leave Brighton and Hove Albion, who may have already signed his replacement.