January has so far been a quiet month for Milan – not that the Rossoneri will necessarily complain.

While technical director Paolo Maldini has failed to this point in his pursuit of a new centre-back – Lille's Sven Botman was a target – he has crucially kept together a Milan team who are again contending for the Serie A title.

The side's progress under Stefano Pioli has prompted links between a number of their players and super-rich suitors, with each possible departure having the potential to derail Milan's season.

Indeed, Theo Hernandez's future could so easily have been the subject of a mid-season soap opera, such is the demand for superstar full-backs in the modern game.

Hernandez certainly falls into that bracket. Just three defenders in Europe's top five leagues – Trent Alexander-Arnold (38), Achraf Hakimi (36) and Robin Gosens (35) – have registered more goal involvements than Hernandez's 30 (tied with Raphael Guerreiro) since he joined Milan in 2019. In 2021-22, the France international's nine (matched by Reece James) are topped only by Alexander-Arnold (12) and Jonathan Clauss (11). 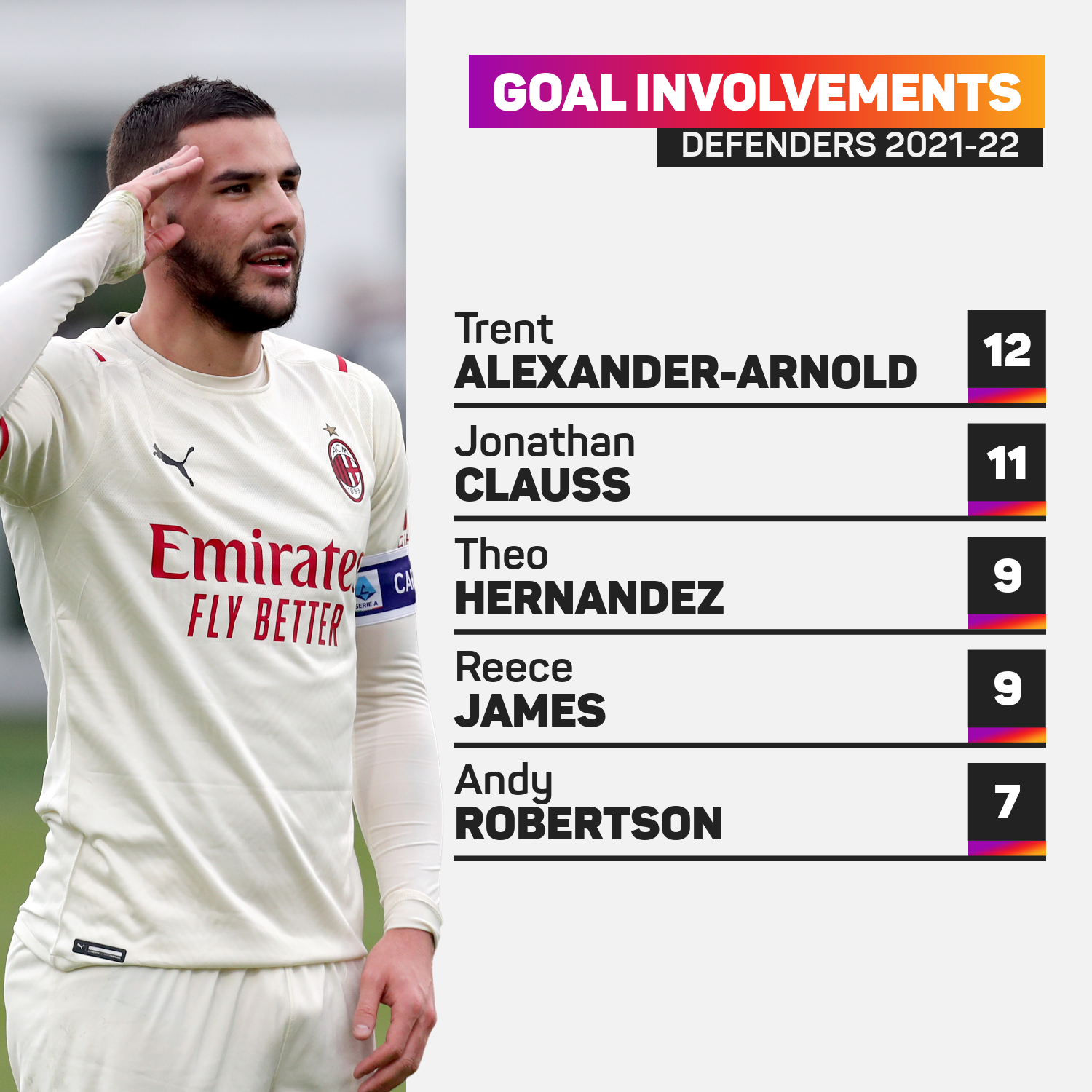 Murmurs of a Chelsea bid were inevitable this month with Ben Chilwell out for the season, while Manchester City – playing right-back Joao Cancelo at left-back – and Paris Saint-Germain – never afraid to splash out at any position – have been credited with an interest in the past.

Instead, Hernandez looks to be staying at San Siro.

Hernandez, whose existing contract expires in 2024, is widely expected to agree an extension, snubbing the prospect of a big move. Of course, the player, who came through Atletico Madrid's academy, has already had one such transfer.

Having impressed on loan at Alaves, Hernandez headed to Real Madrid in 2017 for an unsuccessful stay at the Santiago Bernabeu. In a single season in the Madrid first team, the defender was restricted to 13 league appearances (10 starts) and failed to contribute either a goal or an assist, creating a meagre eight chances.

A return to some sort of form with Real Sociedad was followed by a permanent switch to Milan and at last certainty and a clearly specified role, leading the attack from left-back.

"At Real Madrid, I lacked the confidence to play more loose and drive forward," Hernandez told The Athletic this week. "But at Milan, I've got it.

"I can link up better with the strikers and forwards. What is it that I like? Attacking and going up the pitch. I play with more freedom to score goals and assist more."

Perfect fit for Pioli's side

While these attacking contributions are no doubt what has caught the attention of Chelsea and Co., Hernandez is unlikely to enjoy that same freedom in another side.

At Milan, the 24-year-old's initial task is often simply to get the team up the pitch and into the final third – something he does exceptionally well; no team-mate since 2019 has carried the ball further (231.7 metres) or progressed further up the field (161.7m) per 90. With the license then to orchestrate the play as he sees fit, Hernandez does not always hug the touchline like other players in his position, preferring instead to come inside and use his close control to beat defenders, taking on opponents with 9.7 per cent of his carries. 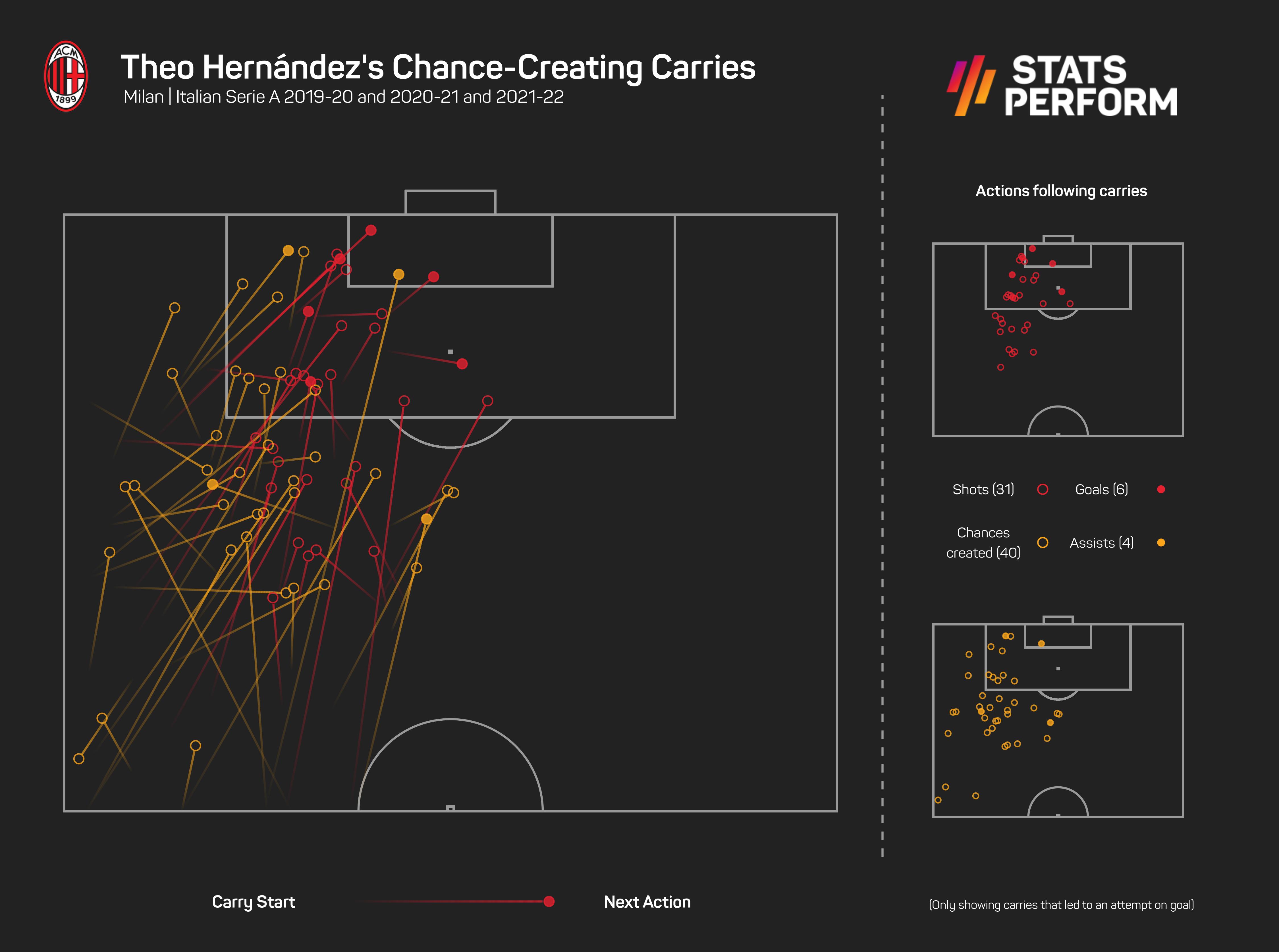 In the final third, as Alexander-Arnold – perhaps far more akin to what was traditionally expected of an attacking full-back – delivers 5.9 open-play crosses per 90, Hernandez opts for this route just 2.3 times over the same period. In fact, the Milan man takes shots himself (1.5 per 90) more often than he creates chances for others (1.3).

The signing of a strong left-sided centre-back like Botman – or Diego Carlos of Sevilla, another mooted option – would therefore appear to represent a commitment to Hernandez and his carefree approach.

Hernandez's nine errors leading to shots in the past three seasons have resulted in three goals, as many as from errors by Alexander-Arnold (two), Guerreiro (one), Gosens, Hakimi and Clauss (all zero) combined. Such mistakes would surely be less costly with a reliable colleague providing back-up, allowing the full-back to continue attacking effectively.

The leader from left-back

Although "a complete defender" in the middle – as Pioli describes the blueprint for Milan's ideal signing – would help, Hernandez is determined to play his part in defensive improvement.

"A full-back firstly has to defend and then has to attack," he told The Athletic. "That is what I'm improving on, little by little. I'm young still, I have many years of football left, and I'm improving on that defensive phase that I was missing."

The need for improvement was evident in September's reverse fixture against Juventus, Sunday's visitors, when Hernandez's slack early header in the attacking half allowed the Bianconeri to break and, with the defender unable to recover, score through Alvaro Morata.

Hernandez could still have teed up a winner at the end of that 1-1 draw when a drive through the middle of the pitch found him in position to slide in Pierre Kalulu for a chance the 21-year-old would like to have back.

Indeed, Hernandez is far from the youngest, rawest talent in the Milan squad and has increasingly established himself as a leader since the game in Turin, wearing the captain's armband in the team's most recent league win at Venezia and marking the occasion with two goals.

How he and Milan, stunned by Spezia in midweek, when Hernandez missed a penalty, would love to be celebrating again this weekend. With a contract extension on the horizon, Rossoneri fans soon will be regardless.

Mbappe insists he stayed at PSG 'because the project has changed'

Kylian Mbappe insisted he simply remains a player for Paris Saint-Germain, despite reports that his new deal gives him control at the club.

Kylian Mbappe rebuffed Real Madrid to stay at PSG, whose president feels they are keeping the world's best player.

Paris Saint-Germain forward Kylian Mbappe turned down Real Madrid to remain with the Ligue 1 champions and says he did not need convincing.