Divock Origi kept up his run of scoring against Everton as his late goal helped Liverpool claim a 2-0 win in the Merseyside derby.

The Reds were made to work hard by struggling Everton, who went into Sunday's match in the relegation zone after Burnley had defeated Wolves earlier on.

Liverpool are now back within a point of their Premier League title rivals Manchester City, while third-placed Chelsea moved five points clear of fourth-placed Arsenal with a last-gasp win over West Ham.

Brighton and Hove Albion and Southampton played out a 2-2 draw in the day's other game. Here, using Opta data, Stats Perform checks the best facts from Sunday's action.

Chelsea turned in a below-par performance against West Ham, but got over the line thanks to Christian Pulisic's last-gasp winner.

The Blues had lost their previous two matches at Stamford Bridge and looked set to be on their way to a third home game without a win when Jorginho sent a poor penalty straight at Lukasz Fabianski. 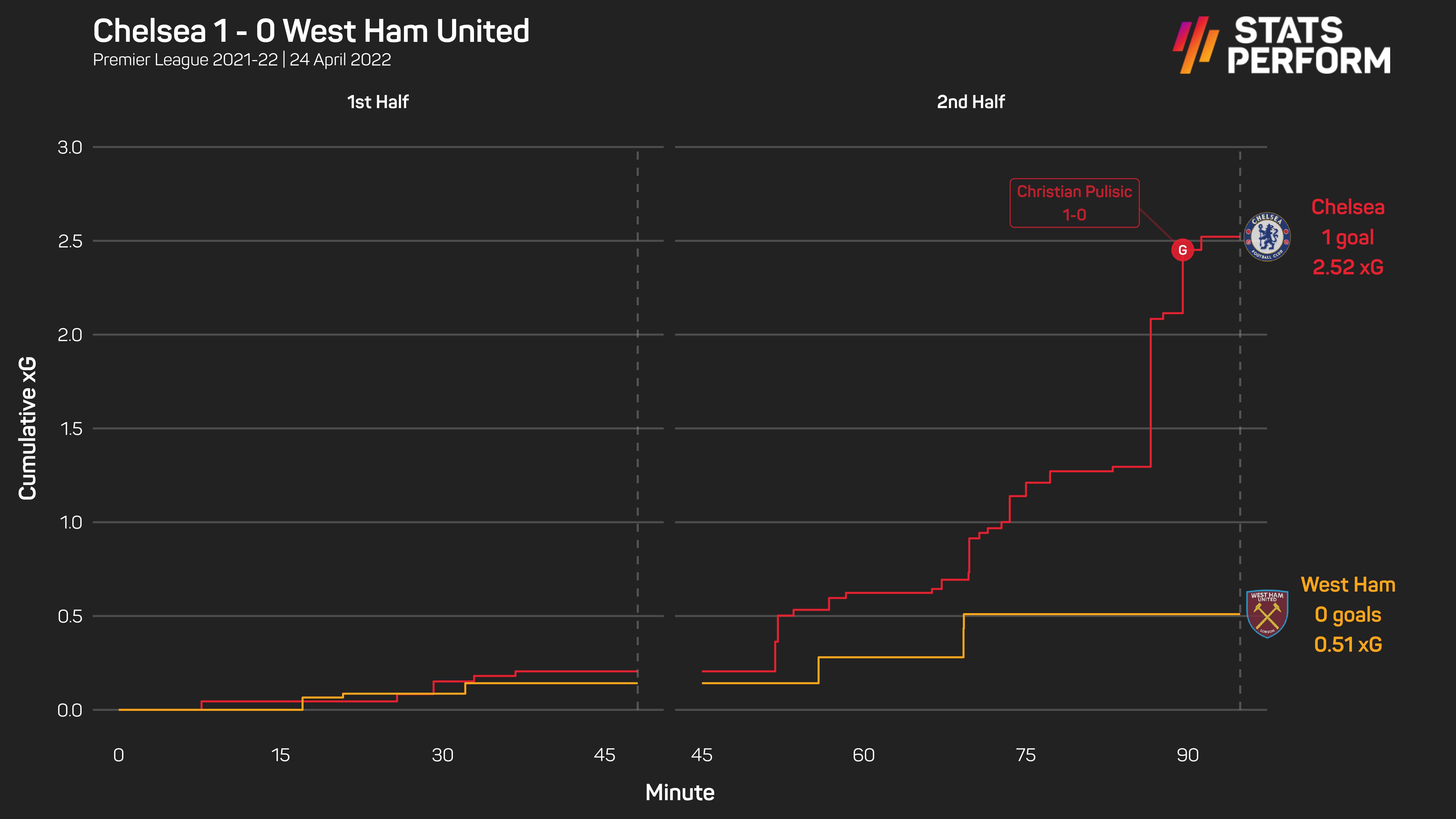 Jorginho had converted each of his last 13 penalties for Chelsea, excluding shoot-outs, with this being his first failure to score from the spot for the Blues since Boxing Day 2020.

But Pulisic swept in from Marcos Alonso's cross to win it. The United States international has been directly involved in 10 goals in 32 appearances for Chelsea across all competitions this term (seven goals, three assists), matching his tally from last season when he made 43 appearances.

Burnley 1-0 Wolves: Clarets out of the bottom three

Burnley claimed a second win on the bounce to lift themselves above Everton and move out of the relegation zone.

They have now won three home Premier League games in a row for the first time since a run of five between December 2016 and January 2017, and that is the same number of victories as they managed across the 26 games beforehand.

Indeed, Burnley have picked up seven points in their three Premier League games under Mike Jackson (W2 D1), the same number of points as Sean Dyche picked up during his final eight league games at the club (W2 D1 L5).

Wolves, meanwhile, have now suffered more defeats in their last five away league games (four) than they had in their first 12 on the road this season (W7 D2 L3).

Matej Vydra grabbed Burnley's winner. Four of his eight top-flight goals for the Clarets have been ones to claim three points.

James Ward-Prowse scored both of Southampton's goals as they came from behind to rescue a point in the south coast derby against Southampton. 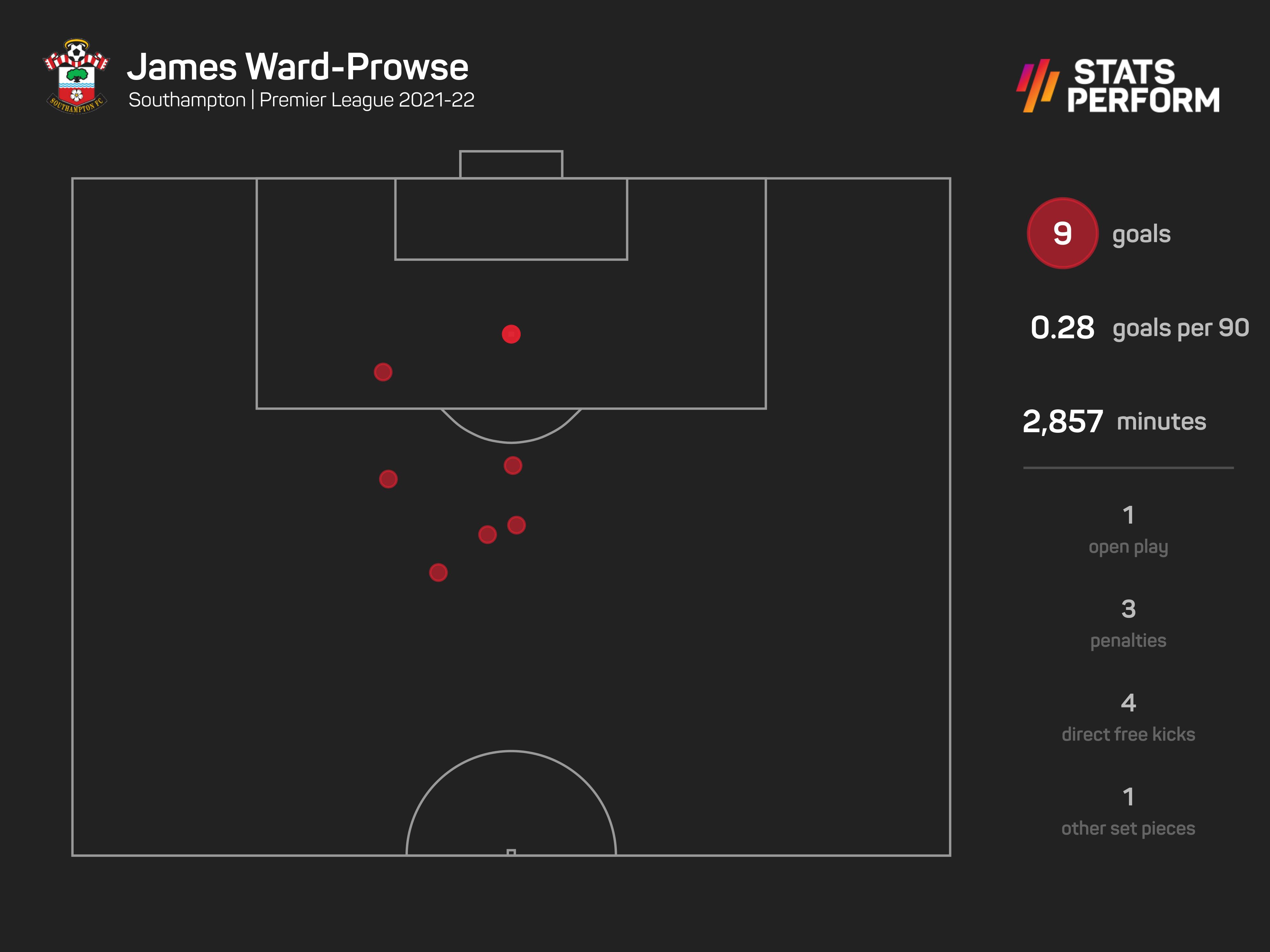 Despite scoring as many goals on Sunday as they did in their previous seven home Premier League matches, Brighton failed to win a game in which they led by at least two goals for just a third time in the competition (P23 W20 D2 L1), having won each of their previous 13 such matches.

But after an own goal put Brighton further ahead, Ward-Prowse's excellent free-kick halved the deficit. He has now scored 14 direct free-kick goals in the top flight, just four shy of David Beckham's record, while only the Manchester United great and Laurent Robert (both five) have netted more free-kicks in a single season.

Ward-Prowse doubled his tally and restored parity with another long-range effort, and 44 per cent of his league goals for the Saints have come from outside the box (17/39).

Liverpool 2-0 Everton: Origi strikes again to give Toffees the Blues

It took Liverpool until the 62nd minute to break the deadlock at Anfield, though they were arguably fortunate not to have conceded a penalty not long before.

Nevertheless, Liverpool's dominance finally told as Everton's back-to-the-wall display was broken – Andy Robertson heading in before Origi scored late on. The striker has now netted six times in nine league appearances against Everton, scoring once every 62 minutes on average.

Liverpool have lost just one of their last 23 Premier League games against Everton (W10 D12), completing the league double over their neighbours for the first time since 2016-17. They now have 79 points, 50 more than Everton, which is the joint-largest margin they have held in the competition (along with the 2019-20 season).

50 - Liverpool (79) sit 50 points above Everton (29) in the Premier League table, the joint-biggest lead the Reds have had over their Merseyside rivals in the competition at the end of a day (also 50 at the end of 2019-20). Bragging. pic.twitter.com/XAtxFP7qvb

Everton will end the day in the relegation zone for the first time since December 2019 (also after a derby defeat at Anfield), while this is the furthest into a season, after 32 games or more, the Toffees have found themselves in the bottom three since 1998-99.

They have lost 11 of their last 12 Premier League away games (D1), including each of the last seven in a row. It is their longest run of consecutive away defeats since a run of eight between April and October 1994.

Origi has now scored 11 goals as a substitute in the Premier League, the outright most by a Liverpool player, overtaking Daniel Sturridge's 10.

Liverpool recorded a possession figure of 82.7 per cent against Everton – only Man City (83 per cent v Swansea City in April 2018) have recorded a higher such figure in a Premier League game since Opta started collecting this data (2003-04).

They may not start the Champions League final, but Eduardo Camavinga and Rodrygo have shown they do not need long to impact a game.