After just a pair of games each, it has already been an up and down World Cup for two of the best players on the planet.

Poland's Robert Lewandowski was the villain on matchday one as he saw a tame penalty saved in the 0-0 draw with Mexico, before redemption as he claimed his first ever World Cup goal in the 2-0 win over Saudi Arabia.

Lionel Messi scored his penalty in Argentina's first game, though was unable to stop his team from suffering a humiliating 2-1 loss to Saudi Arabia, but then his exquisite strike set La Albiceleste on their way to a 2-0 win against Mexico.

These two superstars will surely be front and centre when they clash in their final game of Group C on Wednesday.

Victory for either will confirm their passage to the knockout stage, with a draw also good enough for the Poles.

A defeat would eliminate Argentina, with a draw leaving them sweating on the outcome of Saudi Arabia v Mexico.

History could be on their side, though, with their last meeting at a World Cup coming in 1978, where Argentina won 2-0 before going on to lift the trophy for the first time (Poland won their only other World Cup clash 3-2 in 1974). 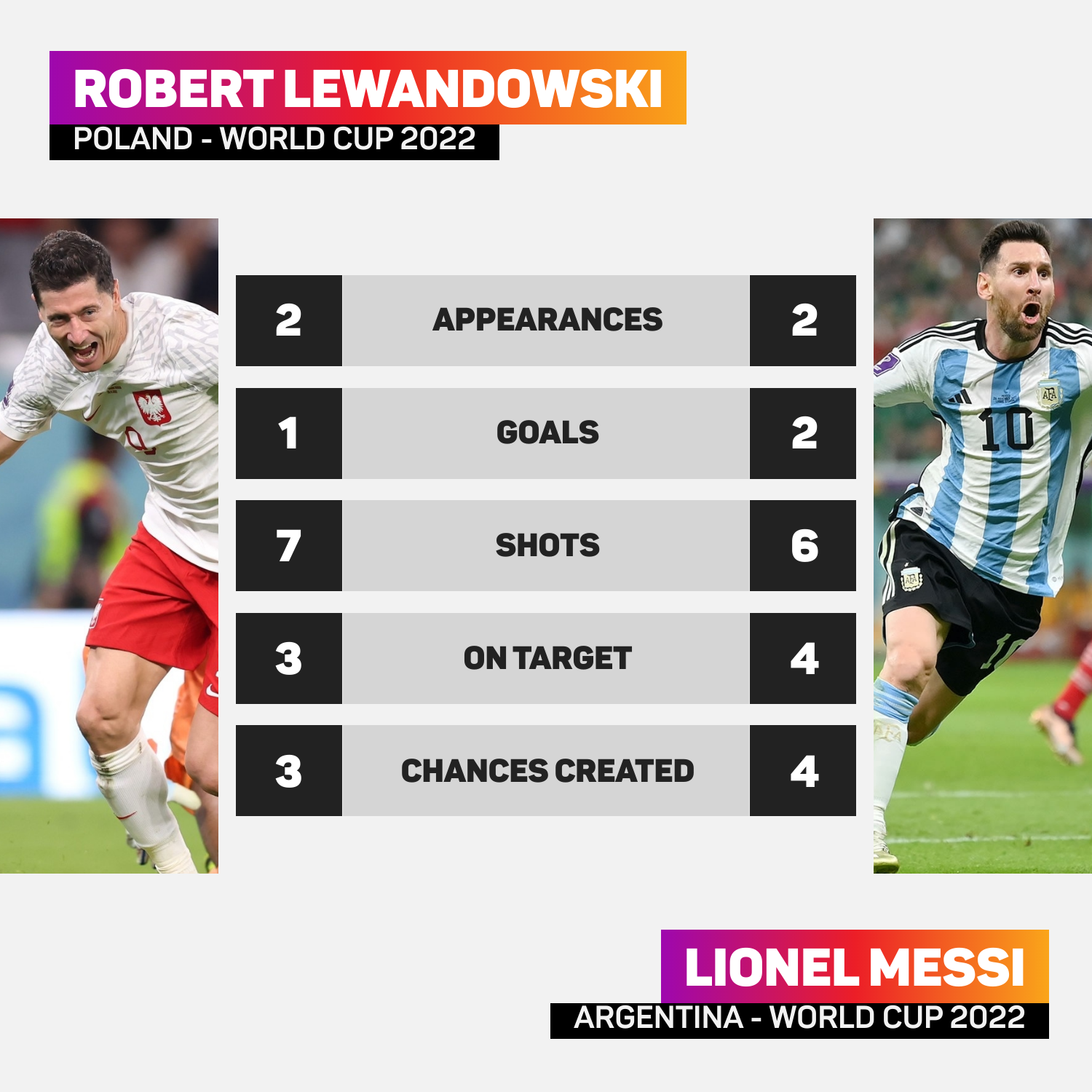 Lionel Scaloni's men will have their work cut out though, with Poland having kept a clean sheet in each of their last three World Cup games, including both in Qatar so far despite facing 27 shots (nine on target).

Poland are looking to qualify from their World Cup group for the first time since the 1986 tournament under Antoni Piechniczek, and they last went unbeaten in all three matches in their first round group in 1982.

Following his match-winning performance against Mexico, Messi said: "Another World Cup started for us today... We can't give up now; we have finals from this point on and can't make a mistake."

He could be right, but if ever there were a contest to prove whether he is, it might just be this one.

Lewandowski (50) was the player with most goals scored among players in the top five European leagues in all competitions last season, ahead of Ballon d'Or winner Karim Benzema (44).

The Barcelona striker cut a frustrated figure against Mexico, but was key in their win against Saudi Arabia, grabbing a goal and an assist.

Lewandowski is the only Polish player to have attempted more than two shots so far (seven), while no team-mate has created more chances than his three, level with Piotr Zielinski.

Despite people daring to suggest Messi's powers are waning, he remains his country's talisman.

The 35-year-old has scored in six successive appearances for Argentina in all competitions, his joint-longest scoring run for his national side (also six between November 2011 and September 2012), while he now has as many World Cup goals as Diego Maradona (eight), with only Gabriel Batistuta (10) netting more for Argentina at the tournament overall.

Despite Poland leading the way in Group C, Opta make Argentina favourites for this one, with Scaloni's side having a 64.8 per cent chance of winning at Stadium 974.

Victor Osimhen is one of Europe's most wanted players after starring for Napoli, but the Serie A leaders are not looking to cash in.

Out of action since the Australian Open, Ons Jabeur will not play in either Qatar or the United Arab Emirates.

Michael Rechner has replaced Toni Tapalovic, the Bayern Munich goalkeeping coach who was a close ally of Manuel Neuer.

Kareem Abdul-Jabbar's long-time scoring record was passed by LeBron James on Tuesday in the latest achievement of a remarkable career.

Pellegrino Matarazzo was sacked by Stuttgart in October and has now been appointed by fellow Bundesliga strugglers Hoffenheim.

Kompany 'very sceptical' of those 'pointing fingers' at Man City

Manchester City face possible expulsion from the Premier League, though Vincent Kompany questioned the motives of the club's critics.

Christian Atsu was said to have been rescued on Tuesday, but Hatayspor still have not located the winger.

Wout Weghorst has one goal in six starts since joining Manchester United, but manager Erik ten Hag is not concerned.

Cody Gakpo has struggled since joining Liverpool, and Ronald Koeman fears he may have made the wrong decision to leave PSV so early.

After LeBron James became the NBA's all-time leading points scorer on Tuesday, the likes of Joe Biden and Magic Johnson have paid tribute.