Cristiano Ronaldo recently struck his 700th career goal at club level and has been lauded by manager Erik ten Hag for his longevity.

Ronaldo hit the latest milestone in his remarkable career with the winning strike in last Sunday's 2-1 win at Everton after being introduced from the substitutes' bench.

The Portugal forward has endured a frustrating time of things under Ten Hag, having so far started just one of United's eight Premier League matches under the Dutchman.

But ahead of facing Omonia Nicosia in the Europa League on Thursday – a match Ronaldo looks set to start – Ten Hag lauded the superstar forward's goalscoring longevity.

"It's phenomenal. Football is [about the] team and we express this in a way," Ten Hag told United's official website.

"I think Cristiano, he knows we can't do it without the team but I must say it's a huge individual performance. If you achieve this, it's incredible.

"Seven hundred club goals. Not many players even achieve 700 games, and he scored 700 goals. I'm really happy for him. I really want to tell you that and I congratulate him." 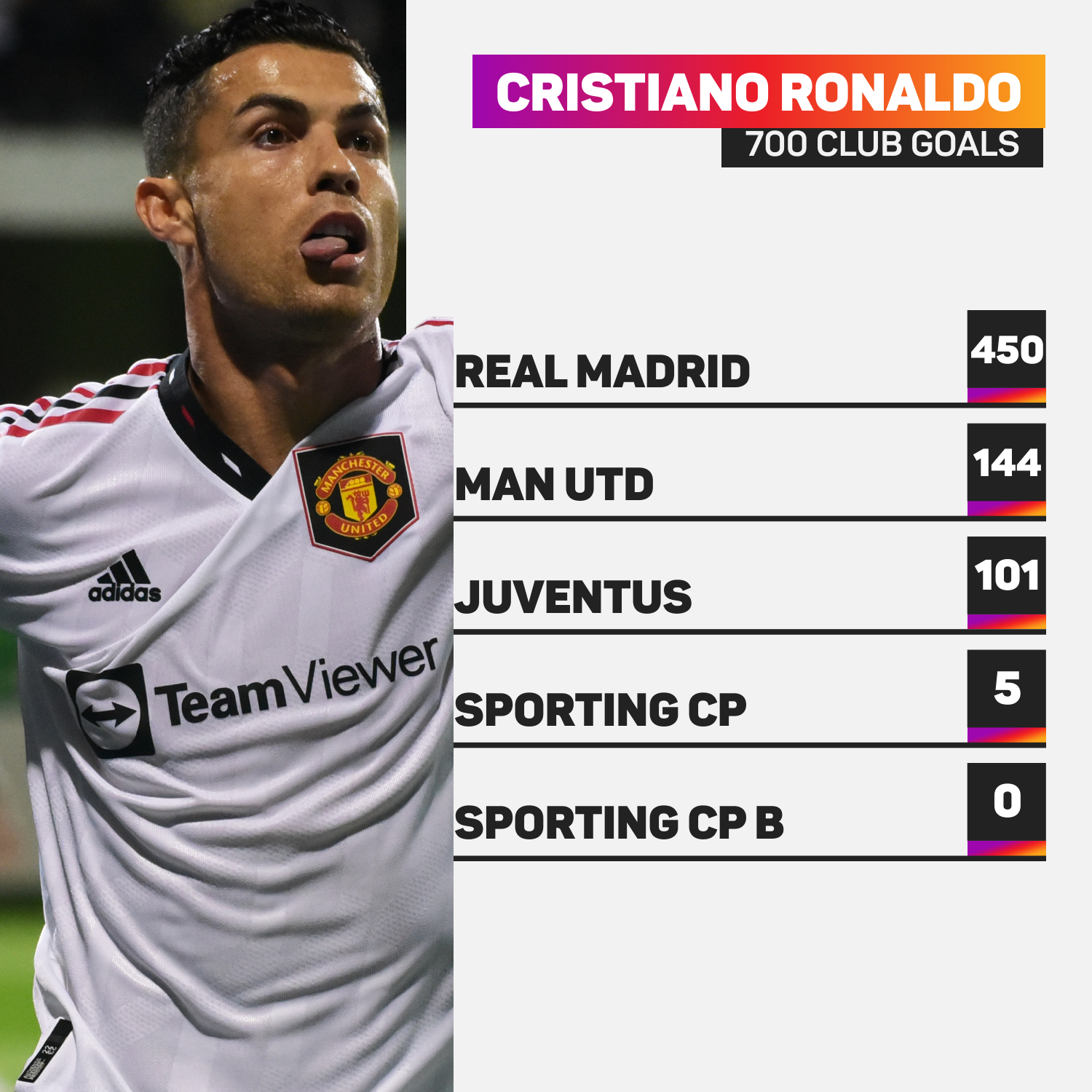 Of those 700 goals scored by Ronaldo, five came for Sporting CP, 118 in his first spell at United, 450 with Real Madrid, 101 at Juventus and 26 in his second stint at Old Trafford.

The 37-year-old will be looking to add to that tally against Cypriot side Omonia as United aim to avoid an unwanted first.

They have lost their past two home European matches, against Atletico Madrid and Real Sociedad – never before have they lost three in a row, with this their 198th game.

United recovered to beat Omonia 3-2 last week and are second in Group E at the midway stage, three points ahead of Sheriff and three behind leaders Real Sociedad.

"It's another important game for us," Ten Hag said. "We want to be first in the group. We are three points behind Sociedad and so we have to win.

"That is the first [target], and we have to score goals, that is the second [target]. So we have to prepare for the game properly because we are playing against a tough opponent.

"They will be ambitious and they will be fighting so they are well organised. It's not easy to score goals. We had that experience last week, so we have to be good."

Kimmich: Germany's World Cup exit 'the most difficult day of my career'

Bierhoff 'angry' after Germany crash out of World Cup

Germany made another early World Cup exit despite beating Costa Rica, paying the price for losing to Japan.

Spain look likely to head into the opposite side of the World Cup draw to favourites Brazil, but Sergio Busquets says that is unimportant.

Germany's win over Costa Rica was not enough to keep them in the World Cup, and Hansi Flick believes wholesale change is needed.

Spain got through to the last 16 by the skin of their teeth, but it turns out Luis Enrique was not even aware they were briefly heading out.

The NBA's leading scorer put up 35 points and 10 assists for the Mavericks, but the Pistons' unpredictable offense got the job done.