Martinelli, Carrascal and the 'Next Generation' stars who could emerge for 2021 Copa America

With the Copa America originally set to start on Friday, we identify five young talents who could benefit from its 12-month delay.

Squad line-ups for the next Copa America could look vastly different by the time the tournament comes around following its postponement.

The newest edition of the competition was scheduled to start on Friday, but the coronavirus pandemic saw it pushed back by 12 months in March.

Some veteran players might now fade from the picture before the Copa America gets under way next year, while other stars will have time to recover from injury.

There could also be new faces on the scene, with a host of uncapped prospects given an extra campaign to break through.

With just under a year to go until the tournament starts, we take a look at five players who might emerge on the international scene before then.

1 - At 18 years 174 days old, Gabriel Martinelli is the youngest player to score for Arsenal on their first Premier League start. Starlet. pic.twitter.com/wgqtDqdEgx

Even beyond Neymar, Roberto Firmino, Gabriel Jesus and co, Brazil have a wealth of attacking talent.

Matheus Cunha and Paulinho each starred at this year's CONMEBOL Pre-Olympic Tournament and are already plying their trade in the Bundesliga, yet the nation's most outstanding prospect might reside in London.

Gabriel Martinelli is eligible for both Brazil and Italy, but the Selecao will surely move swiftly to cap-tie the forward, who has represented them at under-23 level. Indeed, he is one of just three teenagers to have reached 10 goals in all competitions across Europe's top five leagues this term, the other two being Erling Haaland (13 for Borussia Dortmund) and Mason Greenwood (12 for Manchester United).

Martinelli trained with Brazil last year aged 17 after starring for Ituano, and he has continued to impress in his first season at Arsenal – his solo goal against Chelsea in January a fine example of his talents, as he carried the ball 61.6 metres before scoring. Only Son Heung-min (71.4m) has travelled further with the ball in the build-up to netting in the Premier League this term. 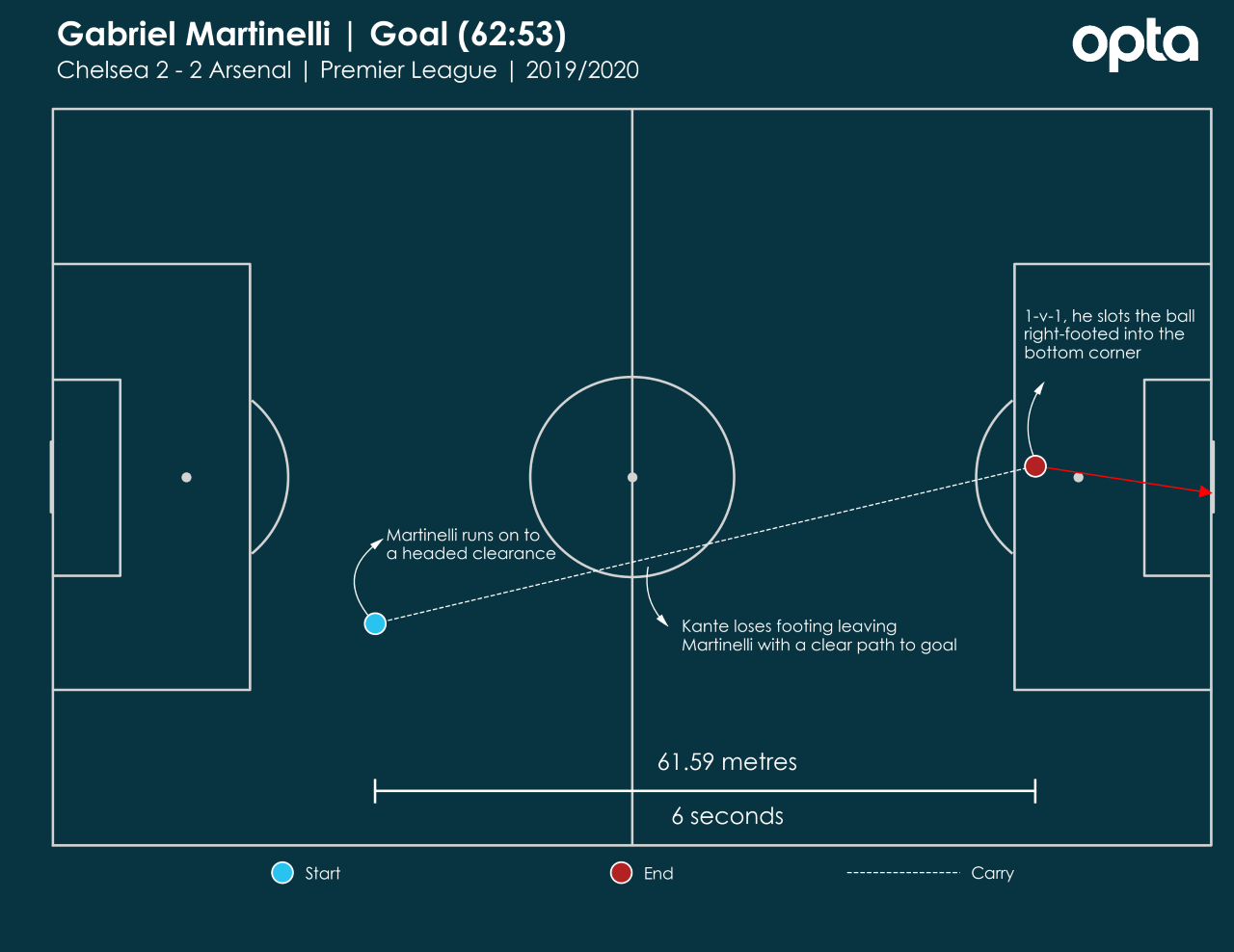 Further progress in the coming weeks and next season would really give Tite something to think about.

Argentina have long had problems at centre-back, with Manchester City defender Nicolas Otamendi still a regular at international level. However, head coach Lionel Scaloni could soon have greater options to choose from, with younger talents now breaking through.

Nehuen Perez might well have gone to the 2020 Copa America, having been called up for the first time late last year after promising loan spells away from Atletico Madrid, while Borussia Dortmund's Leonardo Balerdi is also highly regarded.

But there's every chance Cristian Romero will leap ahead of both in the pecking order given his greater exposure to first-team football at a higher level, having earned a €26million move from Genoa to Juventus at the start of the season, before being loaned back.

It's not proven to be a straightforward season for Genoa, however. Although their form picked up before before the suspension, they will resume their season later this month just above the relegation zone.

Romero has played 21 of their 27 Serie A games - more than any of his defensive colleagues - and made 51 interceptions, a figure bettered by only Armando Izzo (58) among defenders in Italy's top flight.

Eight defenders have attempted more than his 40 tackles, but none of those above him have succeeded as often as him (68 per cent success). A difficult year it may have been, and reports suggest Juve could even sell him on again, but he has done relatively well despite the circumstances.

Uruguay continue to rely on a number of their veterans of previous tournaments, but this will have to change in the coming months and years - especially in attack.

Although Luis Suarez remains a potent weapon, Edinson Cavani has shown signs of decline in the past year, while Cristhian Stuani is now playing in Spain's second tier. All three will be 34 years old by the time the tournament starts.

Diego Rossi should back himself to be in position to put pressure on that star trio. He left Penarol for Los Angeles FC aged 19 and has proven an instant hit in MLS, having a hand in 41 goals (12 assists, 29 goals) in 68 regular-season appearances – only three players have contributed more.

His ability to play effectively alongside another forward could also help his chances of breaking into the team – Rossi and Carlos Vela have created 84 chances for each other, the second-highest such figure in MLS since 2018, while in the same timeframe only Julian Gressel and Josef Martinez (18) have set up more goals for each other than the LAFC pair (16).

LAFC general manager John Thorrington has spoken of "significant interest" in Rossi from Europe, and such a move would give the forward a great chance of making the grade for Uruguay.

Versatile River Plate attacking midfielder Jorge Carrascal will get fans off their seats if he manages to secure a place in the Colombia squad alongside club-mate Juan Quintero.

A tricky player, comfortable out wide or behind a striker, Carrascal debuted for Millonarios at just 16. He initially struggled after joining River Plate on loan from Ukraine's Karpaty Lviv last year, but he has shown glimpses of immense promise and been capped by Colombia's Under-23s.

Representing his country at youth level for the first time since 2015, the 22-year-old scored in each of his first three games at the Pre-Olympic Tournament and started all seven matches.

For River, the former Sevilla youngster - whose time in Spain was curtailed by injuries - has scored four goals and set up another in 17 matches across all competitions.

Running at defenders is his best quality, however. A flamboyant player, Carrascal has averaged 4.9 successful take-ons per 90 minutes in the Superliga this term, succeeding 53 per cent of the time. Only one under-23 player tries his luck more often in this regard - he certainly likes to entertain.

Who knows, a few successive starts could be all that stands in Carrascal's way before an international call-up - then his future will surely lead him back for another crack at Europe.

It might seem a long shot for a player who has yet to feature for Real Madrid's first team and started only twice at the Pre-Olympic Tournament to be playing for Brazil's senior side in just over a year's time.

But Reinier will have the benefit of 12 months in the limelight at one of the world's biggest clubs. After signing from Flamengo for €30m, Reinier netted a brace in just his third Castilla appearance - his final match before the coronavirus crisis intervened.

8 - Reinier Jesus (17 years) was the youngest player to have 8+ goal involvements in the Brazilian Serie A 2019 (six goals and two assists). Jewel. pic.twitter.com/RLP7UPhYLG

The pre-season will be key if the 18-year-old is to get a chance at Madrid in 2020-21, and there is no reason why he could not then do enough to catch Tite's eye.

During his brief time in professional football back in Brazil, Reinier made 14 Brasileiro appearances and had a hand in eight goals (six assists, two goals), one every 118 minutes on average.

By comparison, Vinicius Junior and Rodrygo were significantly less effective - they played a role in a goal every 239 minutes and 341 minutes, respectively, when they were in Brazil, yet both have enjoyed largely promising starts in Madrid.

Vinicius made the big-money move from Flamengo to Madrid in 2018 and had debuted for Brazil within 12 months of his LaLiga bow. The path is clear.

Real Madrid midfielder Kroos set for spell on the sidelines

Toni Kroos seems unlikely to be fit in time to feature for Real Madrid at the start of the new LaLiga season.

Rumour Has It: Chelsea to table new bumper Lukaku bid

Chelsea are ready to ramp up their interest in Romelu Lukaku, who reportedly feels like he has "unfinished business' in London.

A world-record breaking day on the track was capped off by Simone Biles' first appearance in Tokyo since her withdrawal last week.

After the two teams could not be separated after 120 minutes, Brazil eventually eliminated Mexico on penalties as they go for gold.

Massimiliano Allegri is embarking on a second spell in charge of Juventus this season and Giorgio Chiellini is pleased with the appointment.

After becoming a free agent at the end of June, Giorgio Chiellini has signed a new contract at Juventus.

Granit Xhaka has been linked with a move to Jose Mourinho's Roma, but Arsenal do not appear prepared to sell.

Abraham strikes to give Chelsea friendly win over Arsenal

Fofana carried off on stretcher in Leicester's pre-season friendly

Leicester City suffered a pre-season setback as Wesley Fofana was forced off on a stretcher against Villarreal on Wednesday.

Chelsea threw away a two-goal advantage in pre-season to share the spoils with London rivals Tottenham at Stamford Bridge.