Few Manchester United players impressed during the 2021-22 campaign, but which four came out the other side with some credit?

Manchester United have become somewhat accustomed to disappointment over the past nine years, but the 2021-22 season arguably saw them plumb new depths.

But on top of that, champions Manchester City's haul of 93 points meant United finished the season 35 points adrift of the summit – that is comfortably the furthest off the top the Red Devils have ended a term in the Premier League era.

It was also the first time since 1989-90 that United failed to finish a league season with a positive goal difference, as they scored and conceded 57 goals.

Interim manager Ralf Rangnick said during his tenure that the squad needed the equivalent of open-heart surgery, suggesting they needed potentially 10 new players.

There are arguably four players who head into the pre-season under new manager Erik ten Hag having not done themselves a disservice this season, though even they will still have points to prove.

The United career of Fred has been a peculiar one. It's fair to say even his most-ardent backers would admit he's not exactly been worth the monumental reported transfer fee of £52million.

But in his defence, a lot of his time at United has been spent playing out of position. At no point since he joined have the club had a world-class defensive midfielder, meaning he's very often been shoe-horned into that role.

And it rarely takes long for his glaring inadequacies in such a position to come to the surface. First and foremost, his awareness of what's around him is poor, and that's arguably the nightmare situation for someone playing a role in which you expect to receive the ball under pressure just outside your box.

The 2021-22 season still had a bit of that for Fred, but crucially there were more signs of him operating more functionally as a 'number eight', rather than a six, and while few would consider him to be an outstanding passer, it's in this role where his excellent work rate and generally solid technique become much more of an asset to the team. 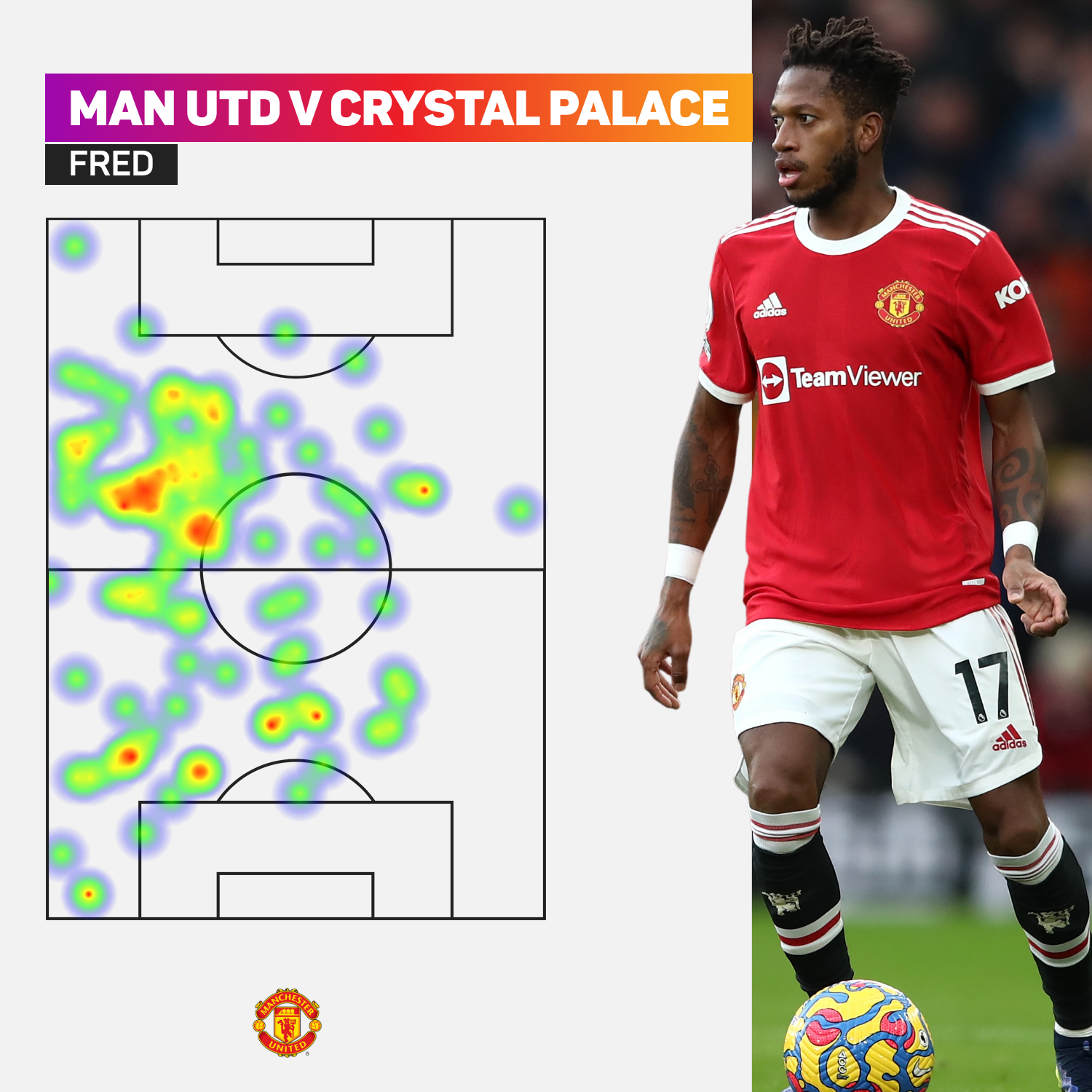 Among United players to feature for at least 500 minutes across all competitions this season, only Diogo Dalot (2.9) attempted more tackles than Fred (2.7) on a per-90-minute basis, while just three players engaged in more duels than the Brazilian (11.7). He also ranked behind only three for passes into the final third (7.5).

Now, perhaps perception plays a part in what many would consider a decent season for Fred, meaning his low performance level in the past suggests his improvement is exaggerated. But as long as he's not playing as a six again, expect Ten Hag to find a use for him.

Few would disagree with the suggestion De Gea's level dipped significantly a few years ago, but there were some positive signs in the 2021-22 season, almost as if he had reacted to the scare of seeing Dean Henderson get some game time in 2020-21.

In fact, his 2.8 goals prevented was the second-best score in the Premier League, highlighting how good his shot-stopping was.

Over the course of the campaign, only Illan Meslier (143) and Kasper Schmeichel (131) managed more saves than De Gea (128). This obviously proves just how unreliable the defence in front of him was, because no team of their stature should have such a busy goalkeeper.

For example, Ederson faced just 60 shots, which was the fewest of any goalkeeper to play over 1,600 minutes.

But despite De Gea generally enjoying a positive season when it comes to bailing United out, there remain plenty of fans and critics who feel the club could still do better than him.

Under Ten Hag, it would seem likely there will be a greater reliance on keeping possession, and this could be where other options are considered.

While De Gea's own-half passing accuracy of 88.2 per cent doesn't sound alarming, there were 12 goalkeepers (minimum 500 minutes) with better records, while the 96 and 95 per cent posted by Ederson and Alisson, respectively, show a significant gulf.

Of course, a goalkeeper's primary function is to prevent goals, but if yours is completely out of sync with the team's style, then that's automatically an area where you're not maximising potential.

When Ronaldo's return was confirmed last year, there was an awful lot of noise around whether he was right for United.

People claimed that, despite his goals, Ronaldo made Juventus a less functional team because he didn't offer enough outside the penalty area.

Those suggestions never quite went away at United either because, regardless of how effective he proved to be in the box, the team in general played below expectations for practically the entire season.

It's impossible to say whether a different striker with a broader arsenal would have turned United into a better team, but given how deep their issues run, it seems a little unfair to pin the blame on Ronaldo. 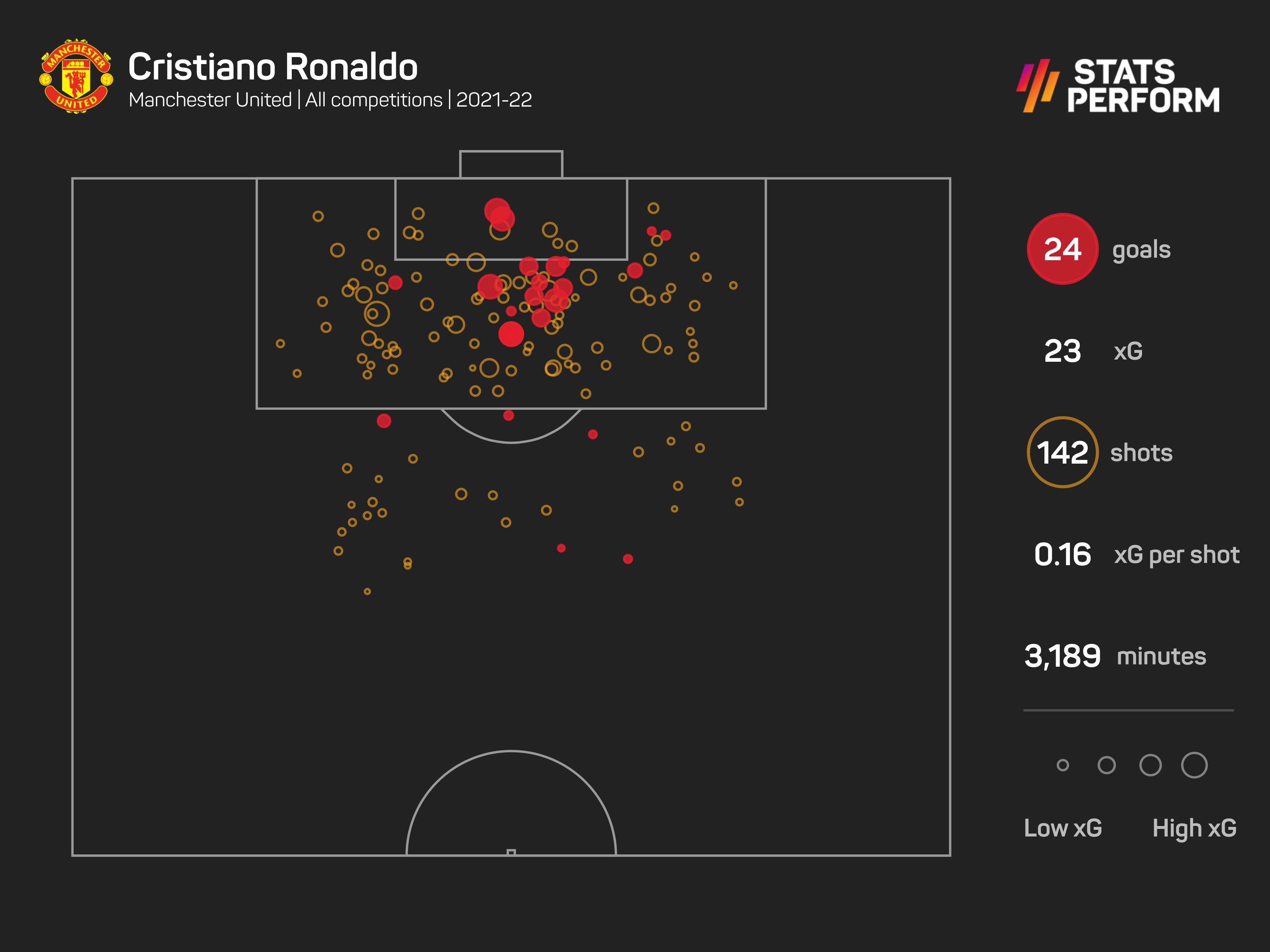 After all, goals win football matches – he certainly did his bit. Across all competitions, he scored 24 goals at a rate of one every 132.9 minutes. Only Jamie Vardy (131.6 mins), Mohamed Salah (129.5 mins) and Riyad Mahrez (122.1 mins) netted with greater frequency among Premier League players (min. 50 shots).

Similarly, only Salah (31) and Harry Kane (27) scored more than Ronaldo, though each of them had at least an extra 800 minutes on the pitch than him.

Ronaldo's 24 makes him one of only six players to net at least 20 goals in a single season for United since Alex Ferguson retired, with Bruno Fernandes and Zlatan Ibrahimovic (both 28) plundering the most in that span.

There was an expectation Elanga was going to play a reasonable amount of football this season, such had been his progress in the United youth sides.

But he didn't feature in a single Premier League game until Ralf Rangnick's first match in charge at the start of December. Before then, he'd had one brief cameo in the EFL Cup before Ole Gunnar Solskjaer promptly forgot about him again.

As it happened, Elanga proved to be a bit of a Rangnick favourite. Even though a lot of his appearances were from the bench, no outfield player featured in more games for the interim manager than the speedy forward.

Rangnick clearly liked Elanga's pace, attitude and work rate, and he did chip in with three goals. Granted, that was hardly an outstanding number, but over the same period only Ronaldo (12) and Fernandes (five) managed more. 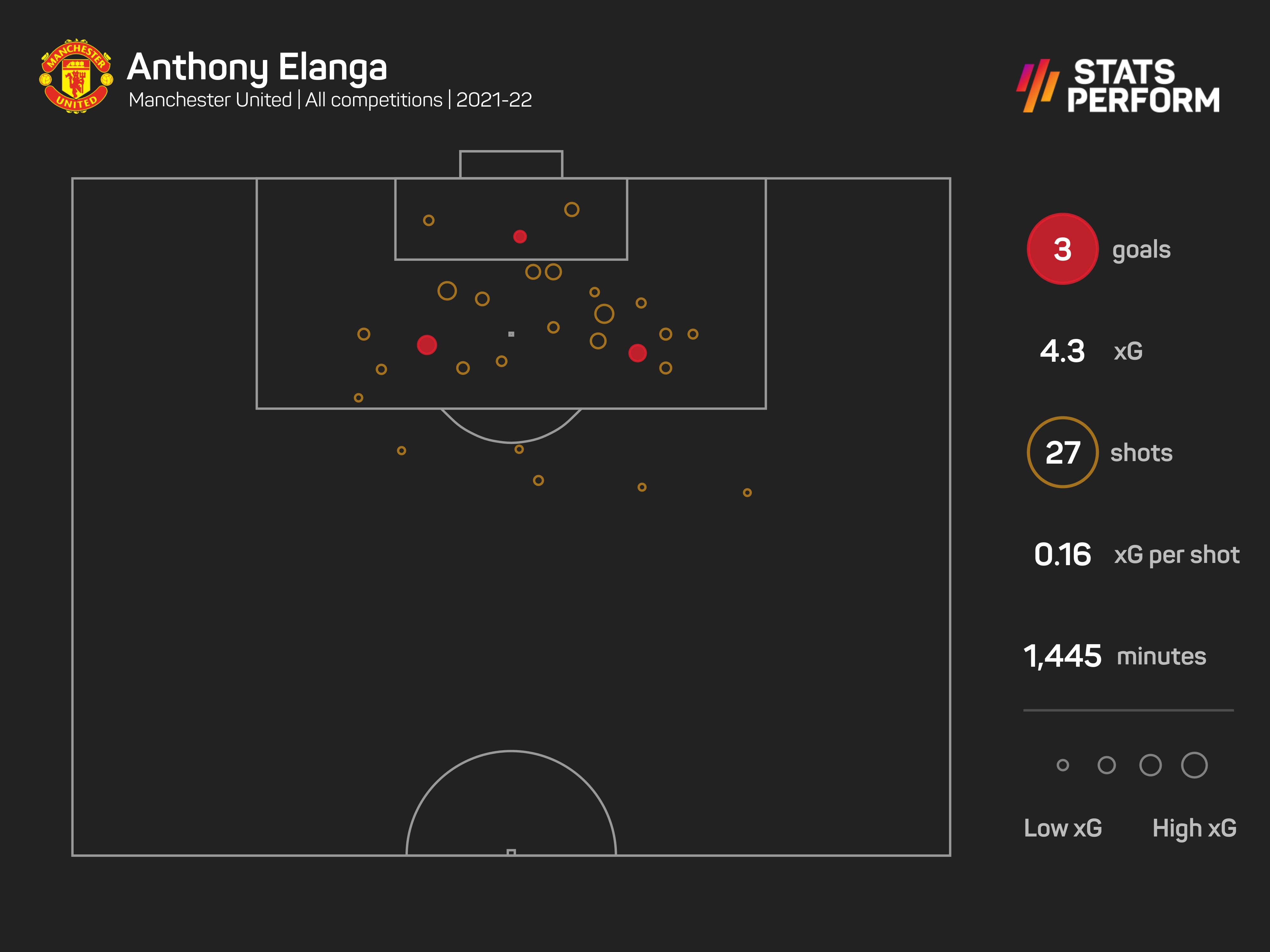 His nine chances created was a pretty poor return, but again, only Ronaldo (84) and Fernandes (67) attempted more shots than the Sweden international (27), so he was offering something in attack.

There's undoubtedly a lot of room for improvement there, and he'll need to sharpen up from a creative sense if he's to have a long-term future at the club, but he's clearly in a stronger position than 12 months ago.