Manchester City are on the verge of another Premier League title, and Kevin De Bruyne has been the driving force.

Kevin De Bruyne has been named the Premier League's Player of the Season.

The Manchester City star has driven Pep Guardiola's team to the verge of a fourth title in the space of five seasons with some sensational displays.

Despite having a rather stuttering start to the campaign after suffering an eye injury in last season's Champions League final, and then sustaining another problem during Belgium's Euro 2020 quarter-final defeat to Italy, the 30-year-old has gone on to score 15 goals in the Premier League so far in 2021-22.

Remarkably, those goals have come from an expected goals (xG) value of just 5.8. He has also provided seven assists. 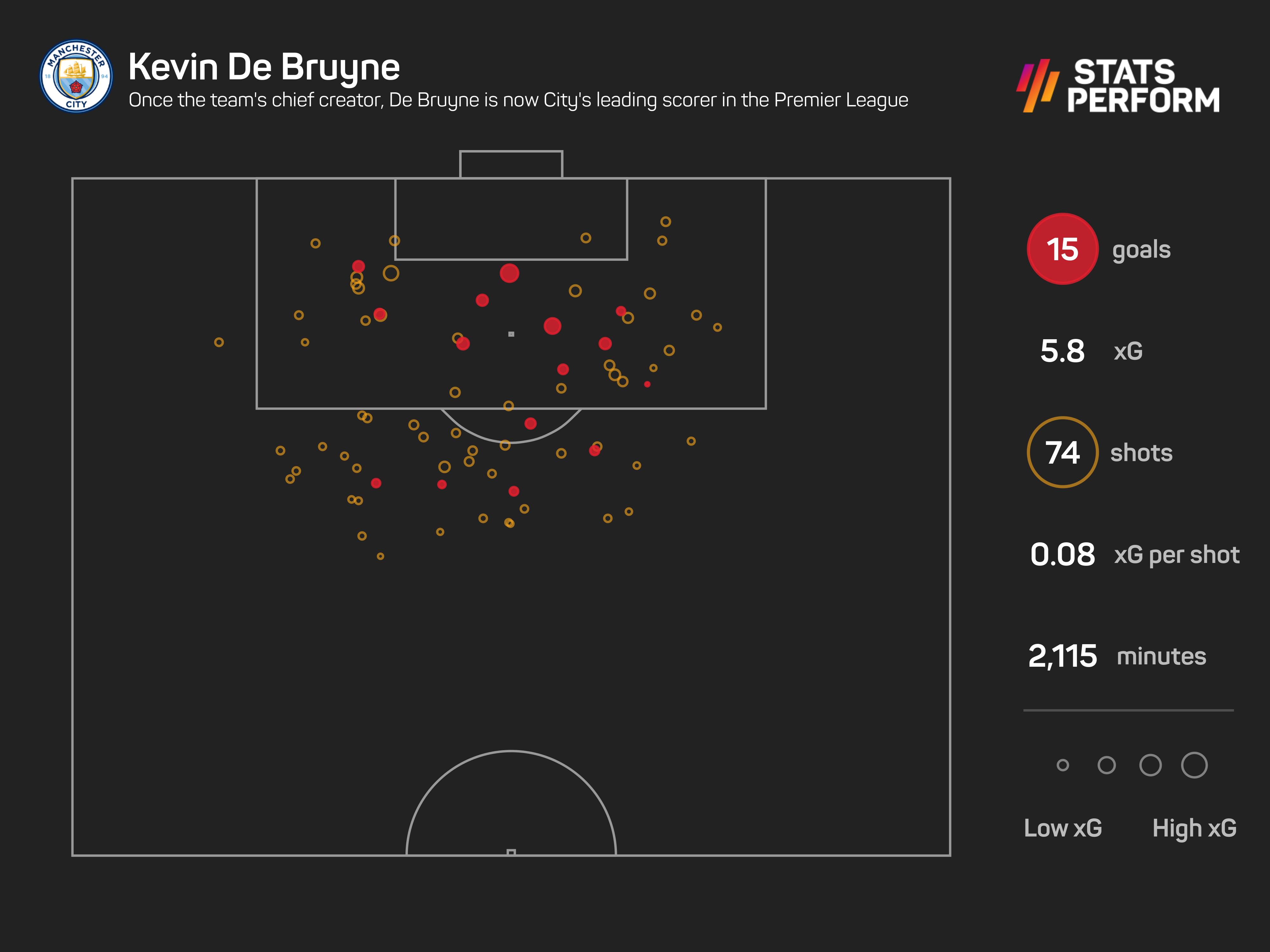 Four of those came in City's 5-1 thrashing of Wolves earlier in May, with De Bruyne becoming the first player since Harry Kane in May 2017 to score three goals in a Premier League game with his weak foot, while he is the first midfielder in the competition's history to do so.

Indeed, he has contributed to 13 goals across his last nine Premier League appearances to truly take the reins of City's title charge.

While City still need to beat Steven Gerrard's Aston Villa on the final day to ensure the title is theirs, De Bruyne's stellar efforts have been rewarded.

The playmaker previously won the award in 2020, after matching Thierry Henry's Premier League assists record, while a City player has taken the prize for a third successive season, with Ruben Dias having won the accolade last year.

City may be signing Erling Haaland ahead of next term but this season they have once again operated without a recognised number nine, though De Bruyne's 15 strikes put him as the team's leading scorer.

Over his last 19 league matches, De Bruyne has registered a goal involvement every 81 minutes, edging out his single-season best from 2019-20 (85 minutes per goal involvement). He is also the only player to average over three shots and over three chances created per 90 minutes this season in the Premier League.

De Bruyne's triumph seals a fine day for City players, with Phil Foden having been selected as the league's Young Player of the Season.

Trincao returns to Barcelona as Wolves opt against triggering option

After an unspectacular season at Wolves, Francisco Trincao is heading back to Barcelona.

While the 2022-23 season will be interrupted by the World Cup in Qatar, the following campaign will see a rescheduled Africa Cup of Nations.

England will stage the Women's European Championship, and the hosts are among the favourites to carry off the trophy on July 31.

Rafael Marquez was crowned a European champion twice as a Barcelona player and is now set to lead the club's youngsters as B team coach.

Ferrari's Carlos Sainz claimed his maiden race win on Sunday, but it came at team-mate Charles Leclerc's expense after a late safety car.

Wimbledon: 'Phew! I am lucky!' – Djokovic relieved to get job done just before curfew

Tim van Rijthoven almost forced Novak Djokovic to return to the court on Monday, but the defending champion saw him off in time.

Ons Jabeur became the first African and Arab woman to win a WTA 1000 title in Madrid this year, and now Wimbledon glory is her target.

Verstappen: I felt like the car was falling apart

Max Verstappen suffered significant damage in the British Grand Prix that left him tumbling down the order at Silverstone.

Roy Nissany was found to have made an "unpredictable and unsafe" move after Formula Two race stewards assessed his scary Silverstone crash.

Trincao returns to Barcelona as Wolves opt against triggering option

After an unspectacular season at Wolves, Francisco Trincao is heading back to Barcelona.

Jannik Sinner triumphed over Carlos Alcaraz in what had been billed as a clash of two future grand slam winners in Wimbledon's last 16.

India were under pressure on day three of the Edgbaston Test when Jonny Bairstow hit 106, but steadied themselves to build a strong lead.