Another tight clash between Liverpool and Chelsea ended with penalties, as the EFL Cup final had done, and the Reds were victorious again.

Of course it was penalties. It was never not going to be penalties.

Thomas Tuchel chose not to bathe the game in narrative and left Kepa Arrizabalaga on the bench this time, but it was another substitute who stepped up to deal Chelsea their second shoot-out agony against Liverpool this season.

The unlikely hero was Kostas Tsimikas, who stepped up to slot home the winning penalty and give the Reds their second trophy of 2021-22.

It meant that Jurgen Klopp became only the second manager to win the Premier League, Champions League, FA Cup and EFL Cup all with one English club, after Alex Ferguson.

He is also the first German to win the FA Cup and just the second Liverpool manager to take charge of the club in the final of four major domestic/European competitions (EFL Cup, Europa League, Champions League and FA Cup), after the great Bob Paisley. This is another golden era for the Merseysiders, no doubt about it.

As the sun shone down on Wembley Stadium, awash in a sea of blue and red and with a noise that could make the arch quiver, Chelsea and Liverpool played out their latest edition of "No, my German coach is better!"

Both teams had already contested three stunningly close encounters this season, drawing in both league games and with the EFL Cup final having to be decided by the 22nd penalty of a shoot-out.

Why did we ever think this meeting would be different?

The FA Cup final is one of the most traditional days in the football calendar, with 'Abide with Me', the national anthem and a royal presence on show. 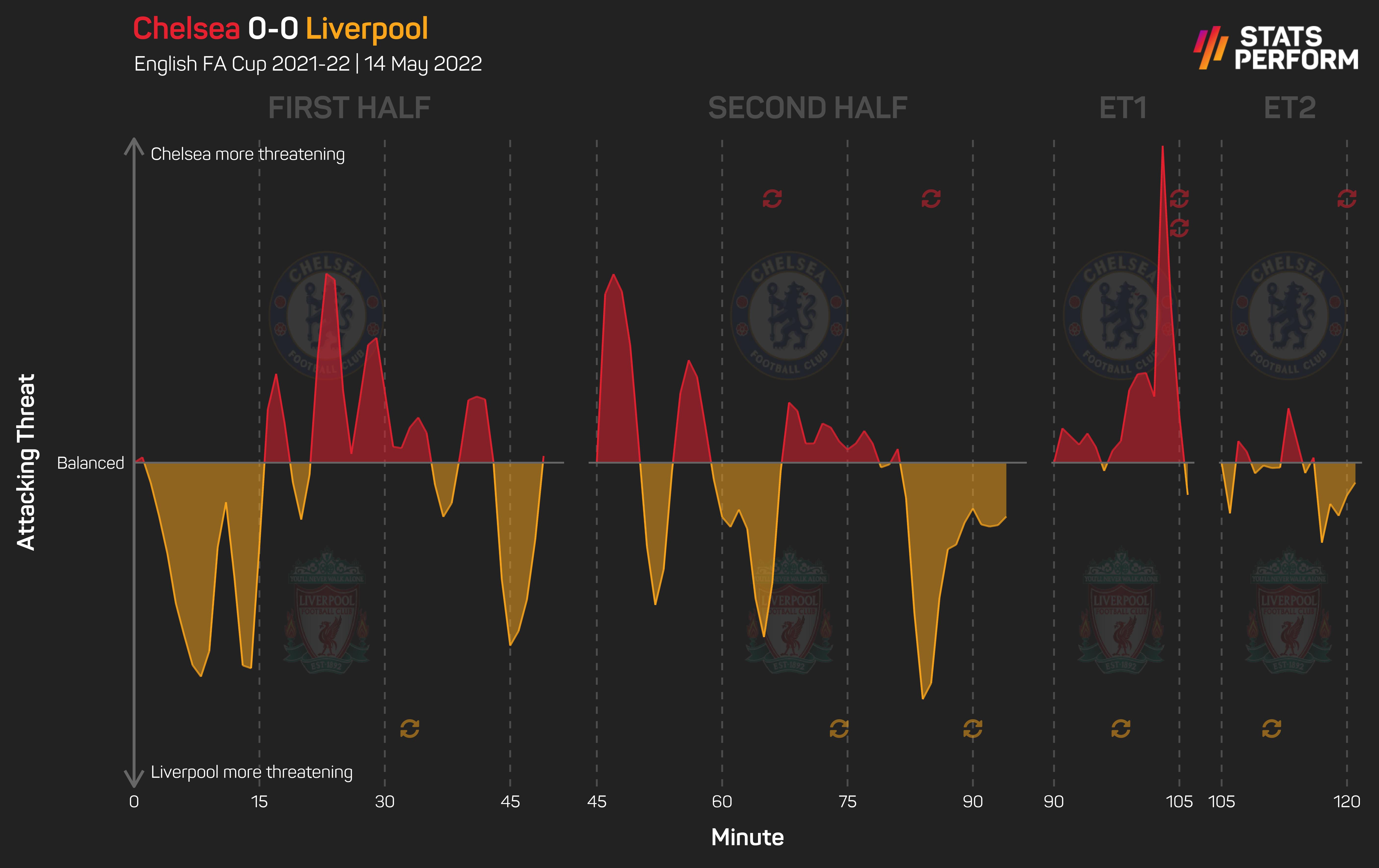 Tradition was missing from the touchline though as both Tuchel and Klopp arrived dressed in tracksuits and baseball caps, while Chelsea for some reason decided to play in their changed kit of all yellow, perhaps trying to evoke memories for Liverpool of their first-half scare in the recent Champions League semi-final against Villarreal.

The attire may have been casual, but the start from Liverpool was anything but.

It was a case of sun's out, guns out for the Reds as they set about attacking Chelsea from the off, showing more of the intense counter-pressing that saw them through their semi-final with Manchester City a few weeks ago.

As in the EFL Cup final, Luis Diaz was a nuisance on the left, putting two balls into the box that very nearly found team-mates, before the Colombian was denied by Edouard Mendy when put through one-on-one by a sumptuous Trent Alexander-Arnold pass.

But Chelsea had good chances of their own, with Christian Pulisic putting an effort wide while Marcos Alonso was thwarted by Alisson.

It was difficult for much momentum to be gained with four lengthy stoppages for injuries, including Mohamed Salah reliving his experience from the 2018 Champions League final and having to come off in the first half.

Salah's replacement Diogo Jota fired over from an Andrew Robertson cross, while Romelu Lukaku did the same as he tried to outmuscle Virgil van Dijk. Liverpool managed nine shots to Chelsea's three in the opening 45 minutes, with 42 final third entries to their opponents' 18.

Despite that, a well-organised defence from the Blues saw the score remain level, and you wondered just what would it take to separate these two seemingly inseparable entities?

It was Chelsea's turn to start brightly after the break – Alonso and Pulisic going close again. More chances spurned.

As was the case with Liverpool, that initial burst died down, allowing the Reds to have a couple of shots narrowly miss the target through Diaz and Jota.

The woodwork was struck three times in the second half as both teams continued to try, and continued to fail.

Van Dijk going off, and he was later seen to be hobbling, presented another injury concern for Liverpool heading into extra-time and Chelsea attempted to give Joel Matip a blistering welcome. Yet Liverpool stood firm.

Diaz received a standing ovation as he left the field, his second excellent performance in a Wembley final for the club, and he only joined on the last day of January.

The former Porto man was the first player to have six shots in an FA Cup final since Anthony Martial for Manchester United in 2016, who also did not score. 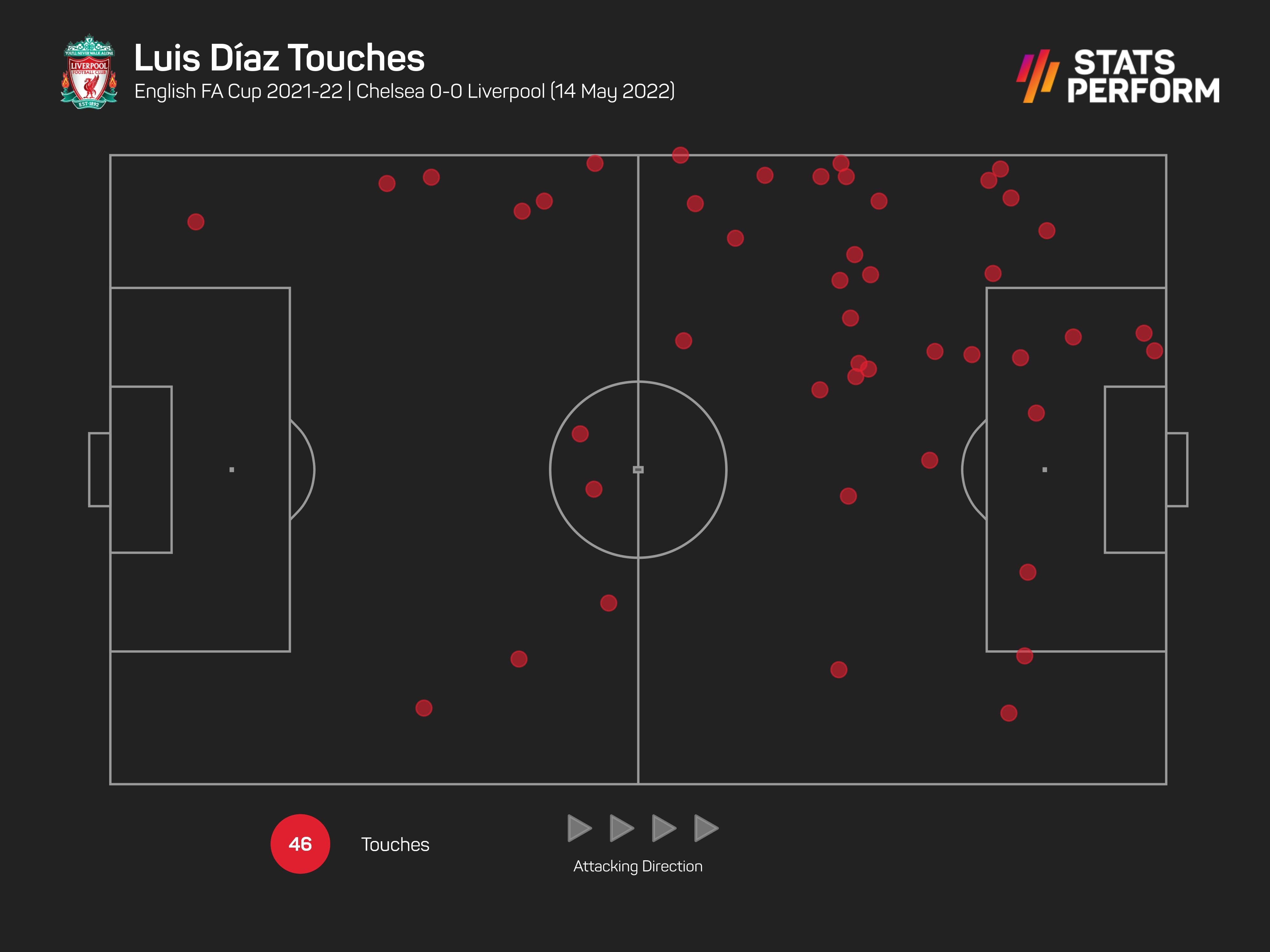 A big rendition of You'll Never Walk Alone went up from the Liverpool end at half-time in extra time while Chelsea fans waved their flags, one last effort to give their teams the slimmest of edges. But this one was destined for spot-kicks.

An early miss from Cesar Azpilicueta meant it looked like an extra-time substitute was going to yet again be his team's downfall, only for the Spaniard to be given a reprieve when Sadio Mane drilled at compatriot Mendy. Sudden death.

But Alisson had a save in his locker, too, getting down to his left to keep out Mason Mount's timid effort, setting the stage for Tsimikas, who had replaced Andrew Robertson, to send Mendy the wrong way and spark celebrations and smoke bombs aplenty in the Liverpool end.

It was yet more domestic cup heartbreak for Chelsea, who having appeared in five of the last six FA Cup finals, have only won one of them.

Liverpool's recent FA Cup record, however, was significantly worse. Klopp had only made it as far as the fifth round on one occasion in six attempts, going out in the fourth round four times and the third round once.

In fairness to Chelsea, much like the EFL Cup final, this one could have gone either way, and it must be remembered that having been in charge of Chelsea for just one year and 108 days, Tuchel has already overseen four major finals, matching Jose Mourinho.

WE ARE THE #EmiratesFACup WINNERS!!!!!!! pic.twitter.com/eZMe5IRbB2

As it was in February, this was Liverpool's day, finding those fine margins and getting over the line to do the EFL Cup and FA Cup double. Not bad for a team that supposedly didn't care about the cups.

A quadruple might now look unlikely given City's league form, but another final, a chance for a third trophy this term, awaits on May 28 in Paris – Real Madrid the opponents.

You'd not bet against that one going to penalties, either.

It was a positive day for Chelsea, as Ross Barkley scored on his 100th appearance for the club and Ben Chilwell returned from injury.

Son Heung-min achieved a childhood dream as he won the Premier League Golden Boot award, which he shared with Liverpool's Mohamed Salah.