Jurgen Klopp offered his congratulations to Pep Guardiola and Manchester City after their comeback victory against Aston Villa sealed the Premier League title on the final day.

City had trailed Villa 2-0 after 70 minutes, only for three goals in a six-minute period to turn things around and secure the league crown.

Liverpool had their own comeback win to pull off, recovering from an early Pedro Neto strike to beat Wolves 3-1 at Anfield, though were ultimately helpless to stop City from winning their fourth title in five years.

The Reds are still on course to win a treble this season, having already claimed the EFL Cup and FA Cup, with the Champions League final against Real Madrid awaiting them on Saturday.

However, they were denied what would have been an unprecedented quadruple by City, who pipped them with 93 points to 92 in a tense title race.

"Congratulations to Man City and Pep Guardiola. Thank you to Aston Villa and Wolverhampton for making a proper game of it," Klopp said to Sky Sports.

"It's not the result we wanted. It was a bit of a rollercoaster. I don't know the results exactly but I know [Villa] were 1-0 up – were they 2-0 up as well? Of course at the moment there's disappointment here as well. 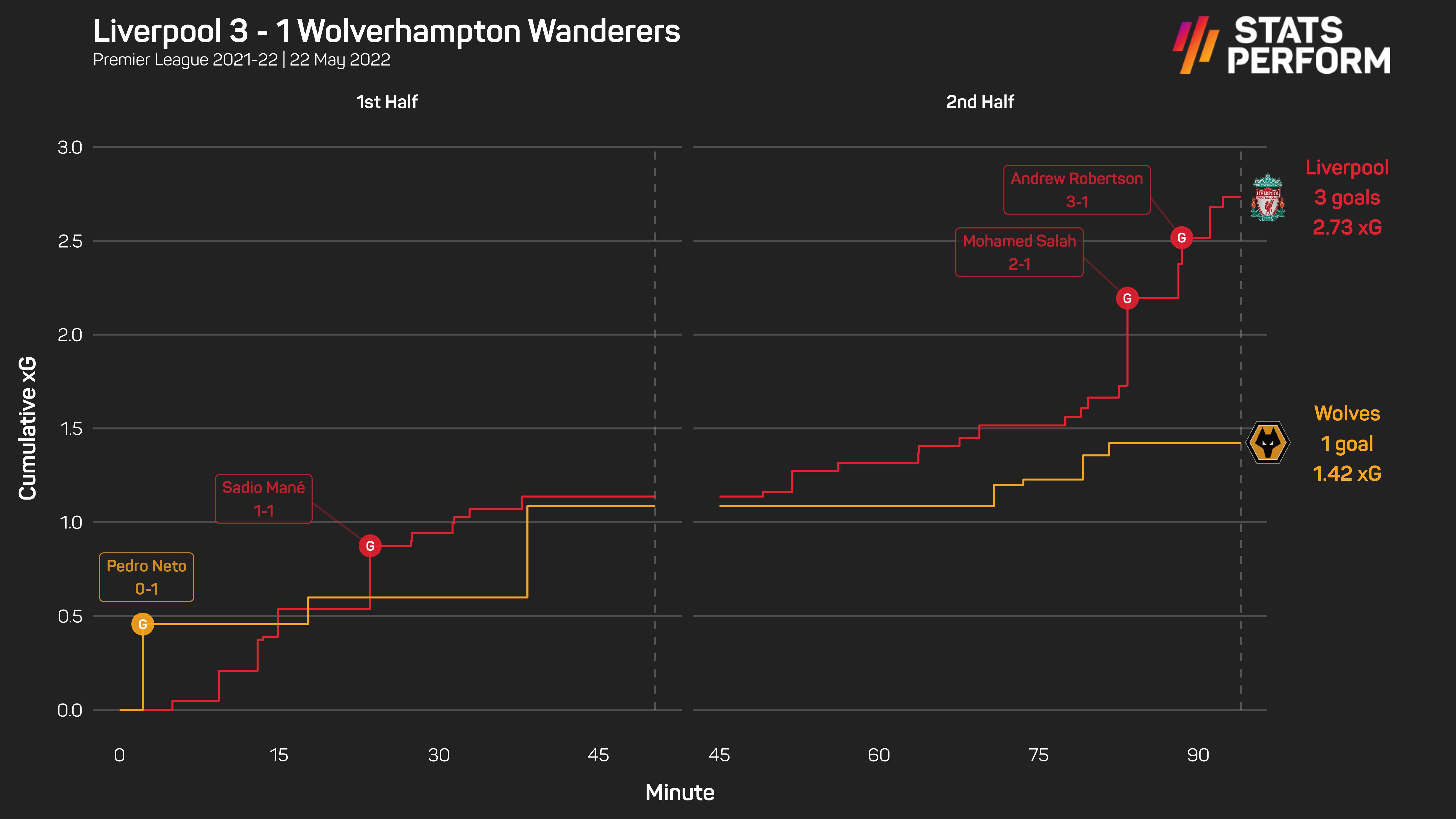 "If it's 5-0 to City after 10 minutes it's just a normal game for us. It wasn't our best game either, but it's all good. 92 points is absolutely incredible. We wanted it all, but now it's OK.

"[Finishing second] is the story of my life. I'm still record holder for not getting promoted in Germany with the highest points tally. You need to get more points than any other teams, but we didn't do that.

"You can't do more than give your absolute best and that's what the boys did again. We chased the best team in the world to the wire, that's absolutely special. We'll build a team again and go again."

There was more bad news for Klopp during the win over Wolves, with Thiago Alcantara being forced off at the end of the first half with an injury, and Klopp believes it unlikely the Spain international will be able to play against Madrid in Paris next week.

"I think he'll be out of the final but I don't know. He's limping, so it's maybe not the best sign."

Mohamed Salah has thanked Sadio Mane after the duo struck up a fearsome partnership with Liverpool, as the latter departs for Bayern Munich.

'He made it all possible' - Klopp hails Mane after Liverpool exit

Jurgen Klopp has passionately hailed Sadio Mane's contributions for Liverpool after his move to Bayern Munich was confirmed.

Sadio Mane says the attraction of a new challenge motivated him to leave Liverpool for Bayern Munich after a trophy-laden spell at Anfield.

Mane joins Bayern: How Lewandowski, Coutinho and others have fared after leaving Klopp

Sadio Mane is leaving Liverpool after six years at Anfield, but how have other stars who have left Jurgen Klopp teams in the past fared?

Sadio Mane's arrival at Bayern Munich has been officially confirmed by the Bundesliga champions, with the forward signing a three-year deal.

Christian Eriksen is reportedly yet to choose between joining Manchester United or staying at Brentford, to Gary Neville's frustration.