Griezmann 'a mix of Zidane and Platini', says Dugarry

France have made it to another World Cup semi-final, where Morocco await on Wednesday, thanks in large to the form of Antoine Griezmann.

Antoine Griezmann has been "a mix of Zinedine Zidane and Michel Platini" in France's run to the World Cup semi-finals, according to Christophe Dugarry.

While the tournament's joint-top scorer Kylian Mbappe has grabbed most of the headlines, the likes of Olivier Giroud and Griezmann have also starred for France.

Griezmann has played in a roaming role for Les Blues in Qatar and has three assists to his name, a tally that only Bruno Fernandes, Harry Kane and Lionel Messi can match.

He is behind only Argentina's Messi in terms of chances created (17 compared to 18), having played a game less, and is joint-second for possession won in the final third.

The Atletico Madrid forward was named the third-best player of the 2018 World Cup when France lifted the trophy, and Dugarry believes he has played just as big a part this time.

"Griezmann, I find him simply exceptional since the start of the competition," Dugarry, who was part of France's 1998 World Cup-winning side, told RMC.

"I even find him, at times, 'Zidane-esque'. He always has the right tone, the right pass. I sincerely think that the France team would not be the same without him.

"We often lack rhythm in our game; there's not a lot of intensity. But, as soon as Antoine touches the ball, he puts rhythm on a pass, on a vision. He has a mix of Zizou and Platini.

"Platini, he enlightened the game, he had a vision. He saw the game before the others. Griezmann, I find him breathtaking. I find him calm, I find him serene, I find him mature." 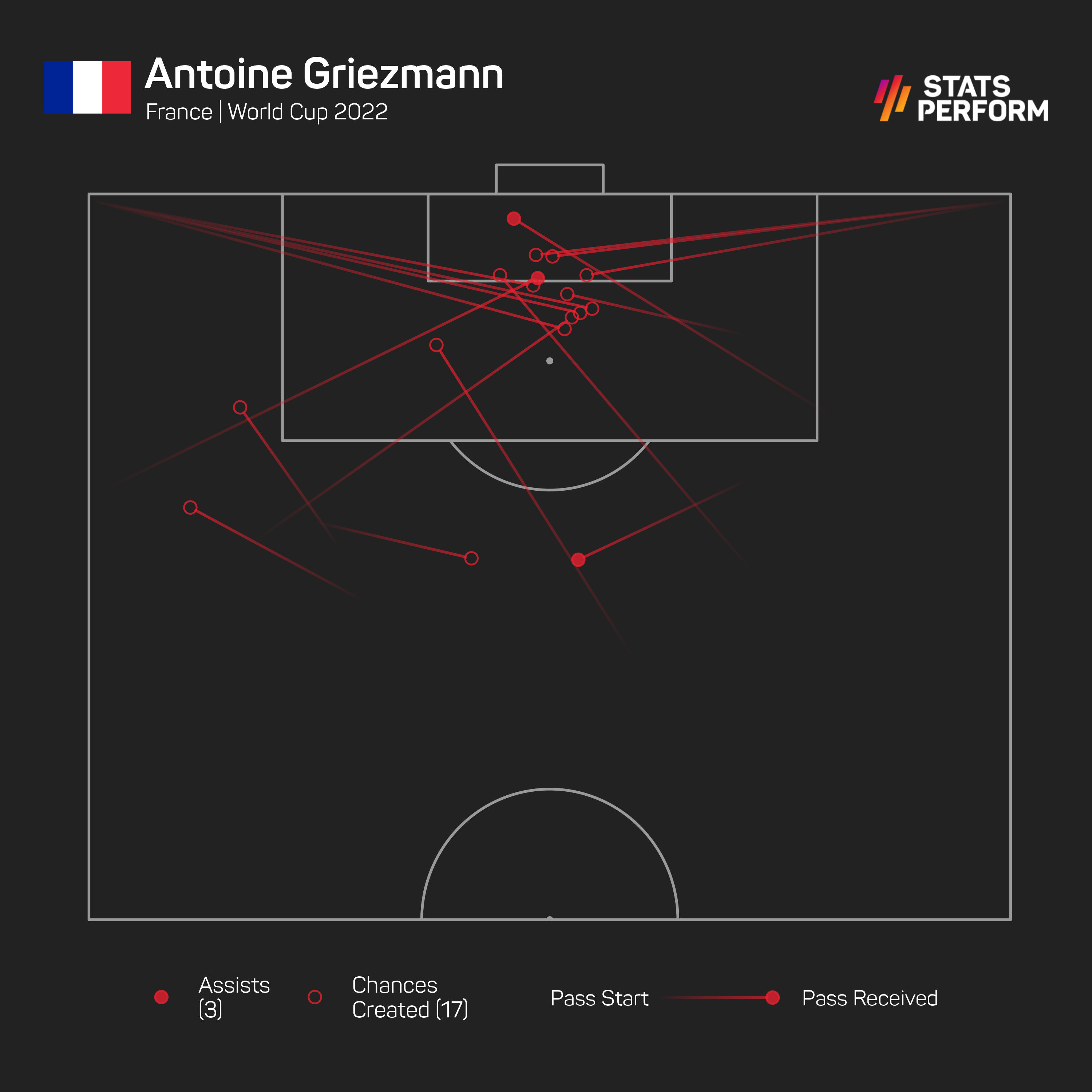 Griezmann drifted to the left to play in a delightful cross for Giroud's headed winner in the 2-1 quarter-final victory against England, having earlier assisted Aurelien Tchouameni.

The 31-year-old has been involved in eight goals in his last eight World Cup starts (three goals, five assists), with seven of those involvements coming in the knockout stages.

"The strength of Deschamps is to have put him in this position," Dugarry said of Griezmann's unorthodox positioning.

"I think [Atletico boss] Diego Simeone will have to do it too. Griezmann must play as a midfielder. In addition, he runs, he gallops, he fills the gaps, he feels the opponents' play.

"It's a bit like a tennis player: the guy always returns the ball to you because he knows where you're going to send the ball."

Didier Deschamps' side will now face Morocco on Wednesday for the right to play Argentina, who defeated Croatia 3-0 in the other semi-final.

France are playing in their seventh World Cup semi-final and have won each of their past three at this stage, whereas Morocco are the first African side to make it this far.