After a difficult few years, Antoine Griezmann has played a key role for France at the World Cup, much to the delight of Didier Deschamps.

Deschamps' side take on Morocco in the second semi on Wednesday, with France aiming to become the first European nation to reach successive World Cup finals since Italy in 1938.

While Kylian Mbappe and Olivier Giroud have grabbed the headlines, Griezmann has been similarly key to the holders' progress despite being used in a new position, essentially in midfield.

The Atletico Madrid player has created more chances (17) and recorded more expected assists (2.9) than anyone else at the tournament, while his two assists against England in the quarter-finals took him to three for the campaign – no one has more. 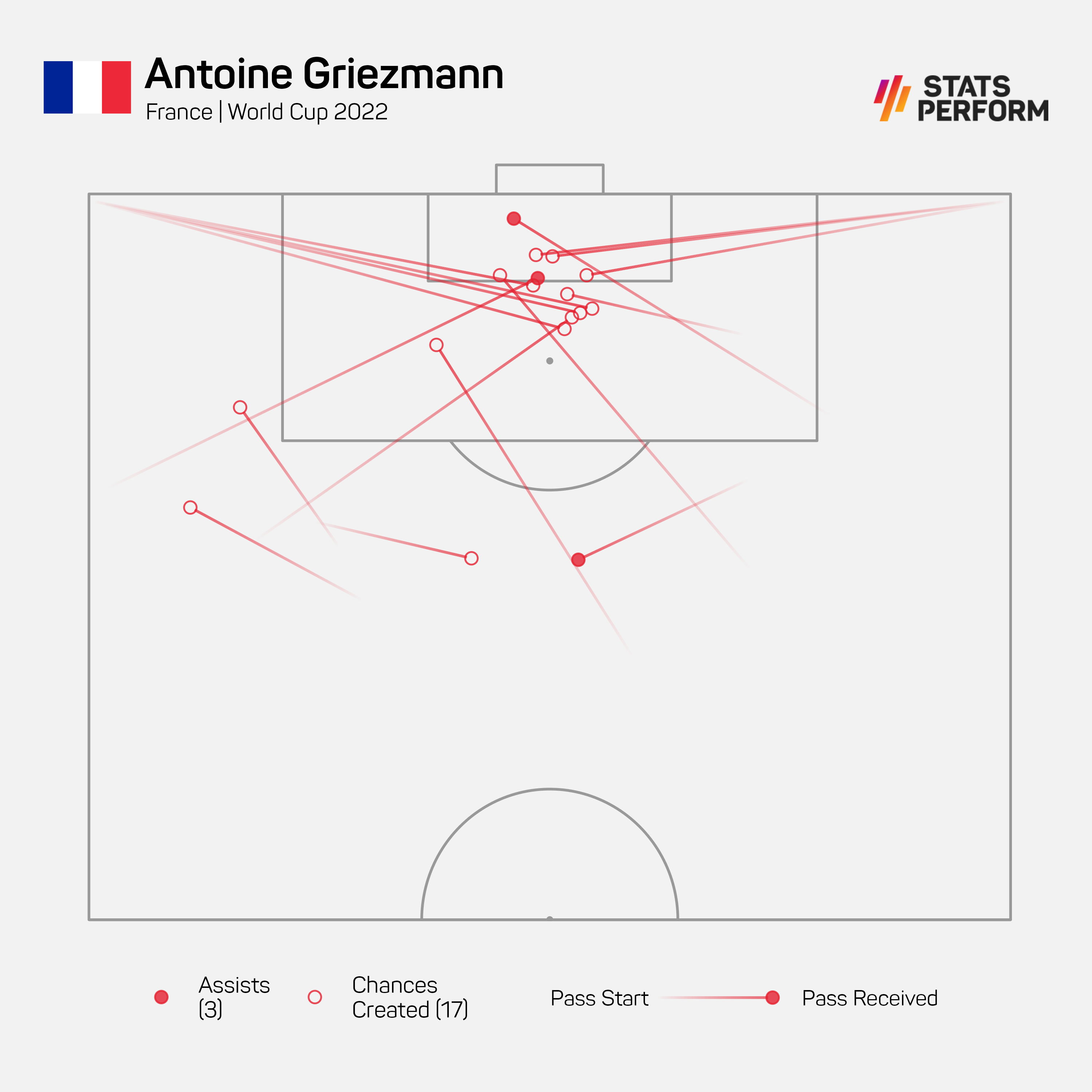 Further to that, his 28 involvements in shot-ending open-play sequences is second only to Mbappe (40) in the France squad, highlighting his influence in their build-up play.

After several difficult years with Barcelona and back at Atletico, Griezmann's form has surprised some, but not Deschamps.

"Yes, he's had a great tournament, but we'll need him to be just as good [on Wednesday]," Deschamps told reporters in Tuesday's pre-match press conference.

"He's the type of player who can really change a team because he's so hard-working and so technically gifted. He's playing slightly different role in this World Cup, but it suits him well.

"He likes defending just as much as attacking and being a playmaker. Of course, his main responsibility isn't ball winning; his left foot is so wonderful, he creates chances for others.

"He's someone who always thinks of the team above everything else. He's extremely hard-working, probably more so than most players.

"He's been an elite player for 10 years now. Of course, he's gone through challenging times like any player, but he's mentally very strong. Like all world-class players, he's at his best in the most important games." 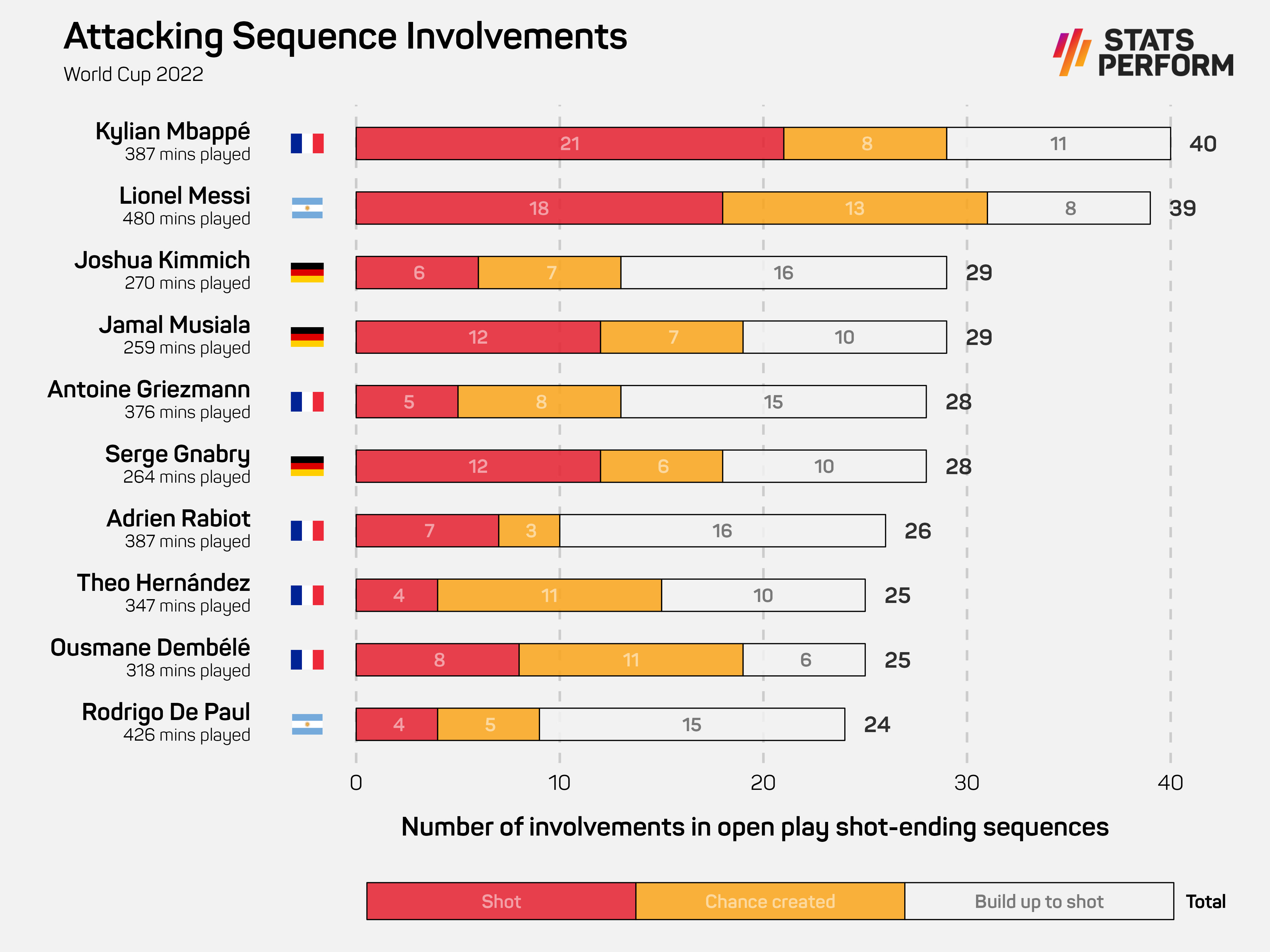 Dayot Upamecano is another France player impressing in Qatar after having to overcome certain struggles.

Although a regular at Bundesliga level from the age of 18, Upamecano did not win his first senior cap until just before he turned 22.

Then, last year he found himself back with the Under-21s instead of in Deschamps' squad for Euro 2020 as he paid the price for some unconvincing early appearances with Les Bleus.

However, he has started all but one of France's World Cup games, with Deschamps pleased to see he has moved past some psychological barriers that were previously stunting his progress.

"Dayot did have an issue with his mental strength, which I think prevented him from being the top player we knew he could become," the coach added.

"He's managed to overcome those challenges, he feels more relaxed, more confident. I do think that's what helped him reach his best level and show the qualities he has.

"He's very fit, good in tackling, good at passing. Sometimes he tries to overdo things a bit with his passing, is too ambitious, but he listens to advice, he's open-minded, relaxed, happy.

"Some players can be introverted in nature like him, and so maybe they need more time to develop and flourish.

"But I'm quite convinced when a player has potential that it will end up flourishing even if sometimes I must recognise there are other players in the squad who can also be very strong and have their role to play.

"So yes, he's been through challenging times, but he's now relaxed, more confident and showing he's a top player."

Roger Federer was the first man to reach 20 grand slam singles titles, but Novak Djokovic and Rafael Nadal have since gone past his haul.