Champions League final: Only Klopp stands between Ancelotti and immortality on night of destiny in Paris

There is a debate to be had that, even if Real Madrid lose Saturday's Champions League final at Stade de France and Carlo Ancelotti never lifts another trophy again, the Italian will still be able to stake a claim as being remembered as the greatest coach of all time.

After all, he has already won 22 trophies across a managerial career spanning 27 years that has seen him coach 10 different clubs in five different countries. Indeed, he this month became the first coach to win each of the Premier League, Serie A, Bundesliga, Ligue 1 and LaLiga.

There is no questioning Carlo's credentials, then, but victory against Jurgen Klopp's Liverpool in Paris really would take the 62-year-old into 'GOAT' territory as the outright most successful coach in terms of major European honours.

Ancelotti is currently level with Alex Ferguson and Giovanni Trapattoni in that regard with seven UEFA club competition triumphs – three Champions Leagues, three Super Cups and one Intertoto Cup, a much-derided competition that is now defunct.

Many would suggest a better barometer of determining the true Greatest of All Time would be to simply look at how many Champions Leagues or European Cups, as it was formerly known, a manager has won. In that case, Ancelotti is level with Bob Paisley and Zinedine Zidane with three apiece. 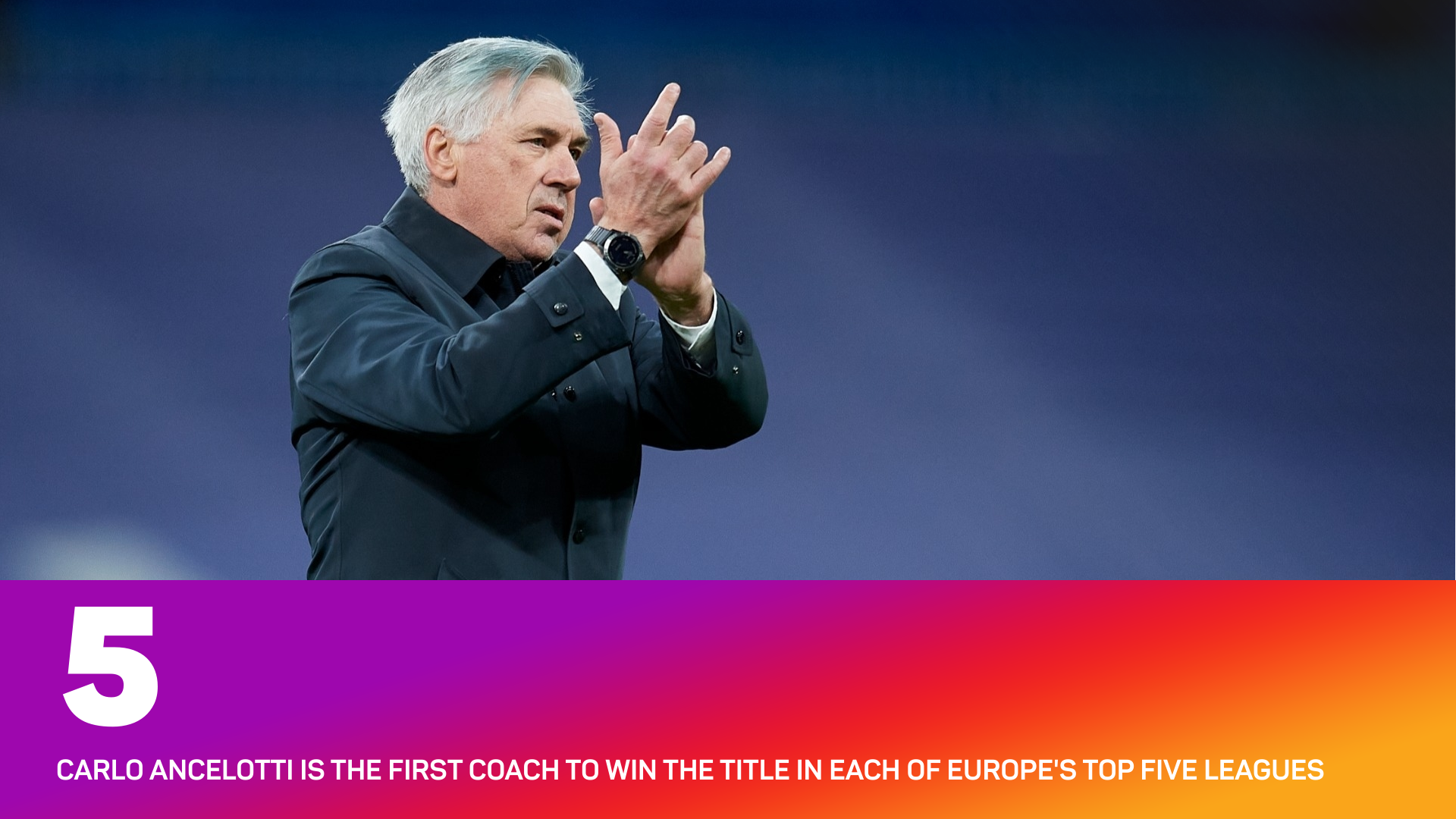 Triumphing for a fourth time in UEFA's showpiece competition, having previously done so with Milan in 2003 and 2007, and Madrid in 2014, would therefore set Ancelotti apart from the rest.

The hugely experienced coach has a great record when it comes to Champions League finals, too, with victories in three of his previous four such matches. The only exception to that? In 2004-05 when Liverpool famously beat Milan on penalties in a game they trailed 3-0 at half-time.

The glitz and glamour of a Champions League final was far from Klopp's mind in that campaign when in his fourth season in charge of Mainz. The 2004-05 season was just as memorable for the German club's supporters as Liverpool's, though, as they finished 11th in what was their first top-flight campaign.

Seventeen years on, Klopp now has a shot at becoming one of 17 multiple-time winners of the European Cup/Champions League, level with the likes of Jose Mourinho, Pep Guardiola and even Manchester United great Ferguson.

He went all the way with Liverpool in 2019, triumphing over domestic rivals Tottenham, but his previous two finals in the competition ended in disappointment, with defeat against Bayern Munich as Dortmund boss in 2013 and against Zidane's Madrid as Liverpool manager in 2018.

Zidane may have been replaced by Ancelotti in the Madrid dugout, but this weekend presents Klopp – and indeed Liverpool – with a shot at redemption. Having won two trophies already with the Reds this season, Klopp's cup final record looks a lot better than it did just a few months ago.

He has now won eight of his 18 finals, which compares to 16 victories from 22 finals for Ancelotti across all competitions. In percentage terms, Klopp has won 44 per cent of finals he has contested, while Ancelotti has won 73 per cent. 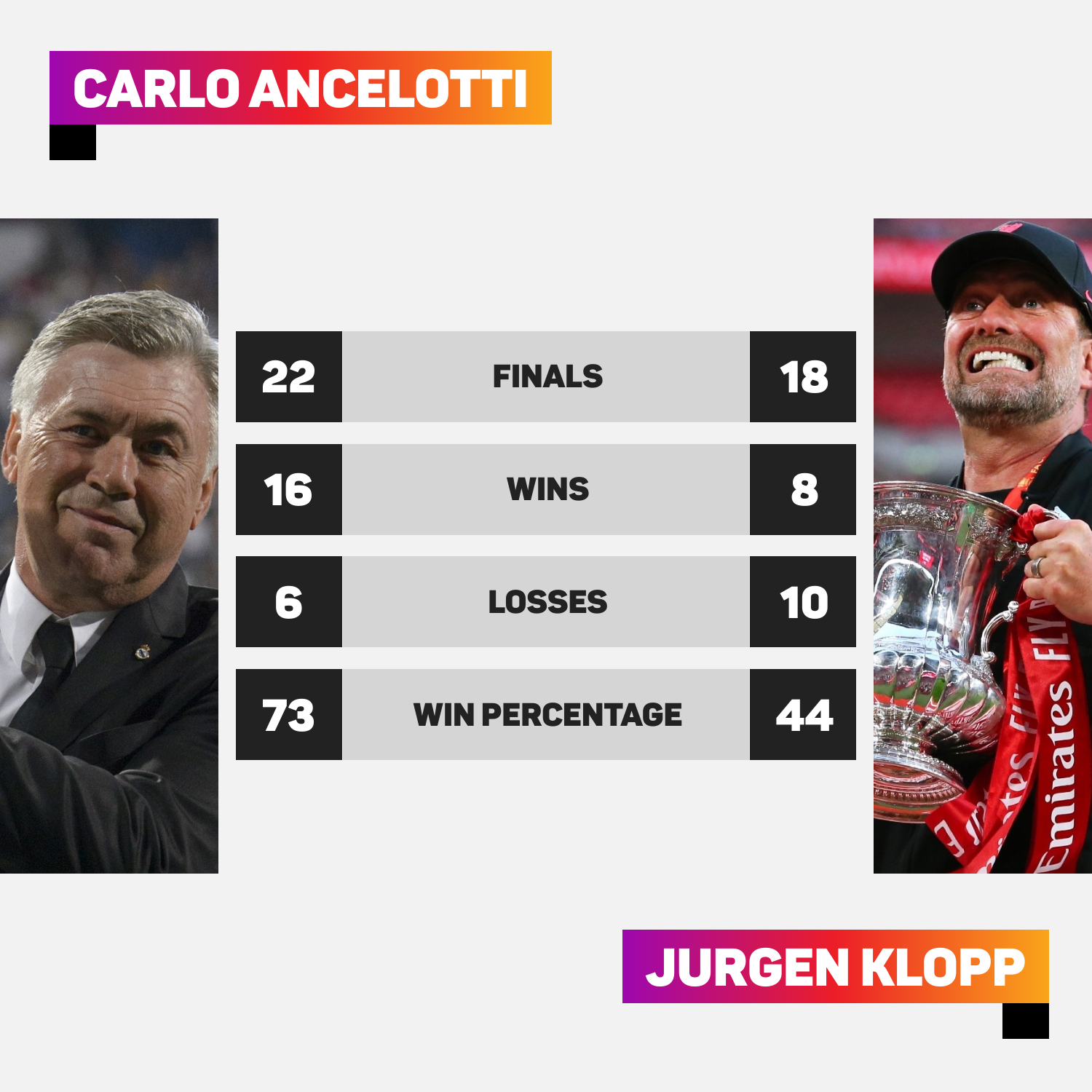 Ancelotti and Klopp are no strangers to one another, of course, with Saturday's showdown set to be their 11th meeting in all competitions. Ancelotti edges the overall record from the previous 10 encounters with four wins to Klopp's three.

Despite managing an Everton side far inferior to Klopp's Liverpool, Ancelotti lost just one of his three Merseyside derbies during his season-and-a-half in charge of the Toffees.

That includes three successive games without defeat, culminating in a 2-0 win in February 2021 – Everton's first Anfield victory since 1999 and their first win either home or away over Liverpool since 2010.

Ancelotti certainly had Klopp's number in the most recent of their battles, although the results of his two finals against English clubs in European competition have been mixed – the aforementioned shoot-out loss in 2005 and a 2-1 win two years later, both during his time with Milan and both against Liverpool.

The Italian has certainly stood the test of time, with his 70 per cent win rate in his second stint with Madrid bettered only by the 75 per cent enjoyed the first time around in the Spanish capital, and now a shot at history – a fourth Champions League and an eighth European trophy – awaits.

Against a familiar opponent in both Liverpool and Klopp, and in a city where he helped grow Paris Saint-Germain into a force to be reckoned with just over a decade ago, the stage is set for Ancelotti to further strengthen his claim as being the greatest of them all.