Brilliant Benzema everything that Chelsea are lacking in Lukaku

Romelu Lukaku will not play in the second leg against Real Madrid, an absence that rather sums up how his return to Chelsea has gone so far.

Karim Benzema's brilliance was the difference as Real Madrid stormed into a 3-1 lead over Chelsea last week.

The 34-year-old, as evergreen as they come, was at his sublime best once again with a sensational hat-trick at Stamford Bridge to put Madrid on the verge of reaching the Champions League semi-finals.

It followed on from his three goals in that remarkable comeback against Paris Saint-Germain in the round of 16 and it would not be unreasonable to expect Benzema to hit another hat-trick on Tuesday when Thomas Tuchel's reigning European champions visit the Santiago Bernabeu, such is the France international's prolific form.

"To say that we are dependent on Benzema is the truth, there is no need to hide it," said Carlo Ancelotti in Monday's news conference previewing the second leg.

"I am very happy to be dependent on Benzema."

While Benzema thrives with that dependence on his shoulders, Chelsea visit the Spanish capital without the striker they hoped would take them to the next level. It is safe to say that Romelu Lukaku's return to Stamford Bridge has not gone to plan. 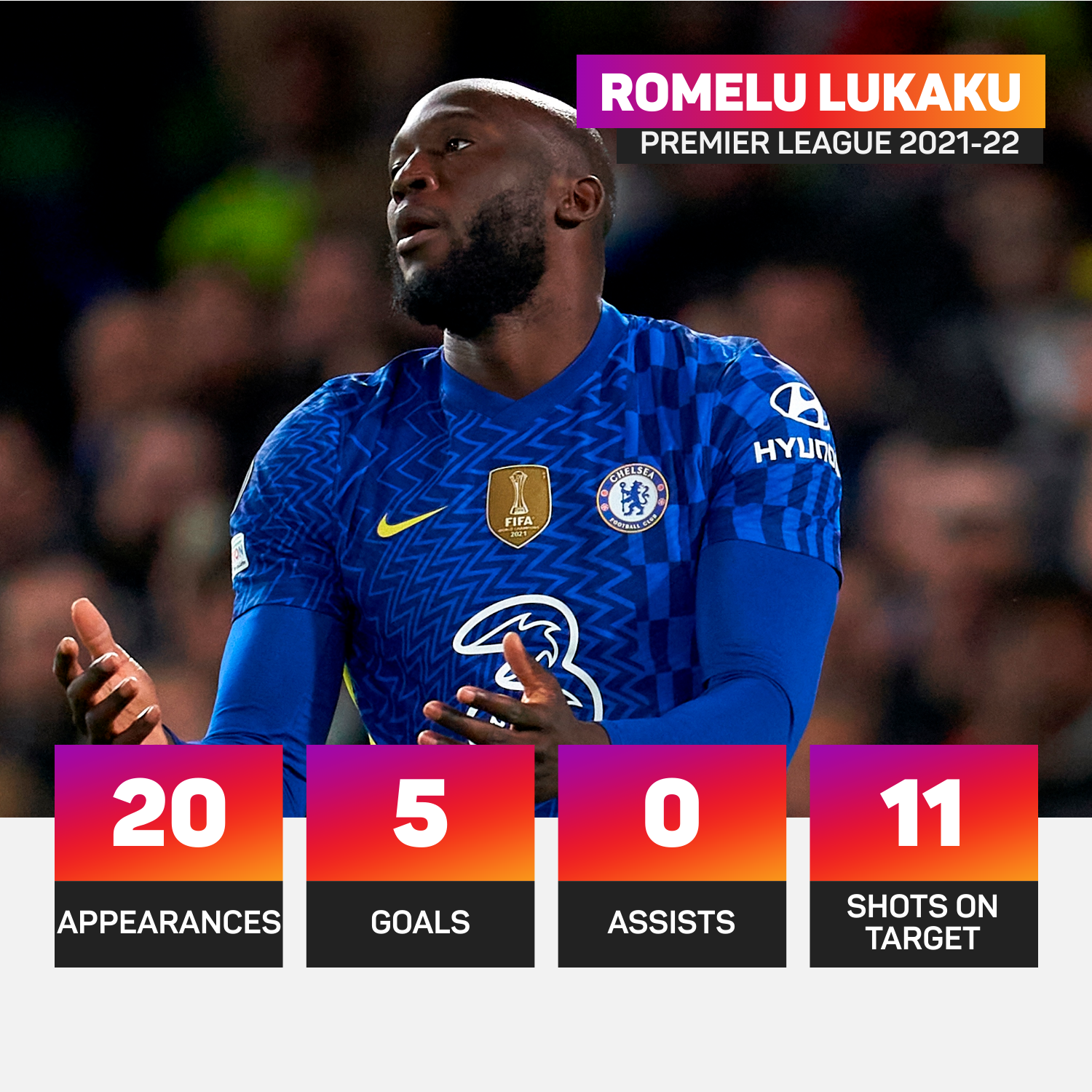 Having rediscovered his best form over two seasons with Inter, driving the Nerazzurri to their first Serie A title in over a decade, Lukaku has come closer to resembling the much-maligned version of himself that struggled at Manchester United.

Lukaku will be absent through injury for what is his team's biggest game of the season, a rather fitting summary of how his second spell at Chelsea has played out so far.

All going wrong for Rom

It seemed the perfect match. Lukaku was fantastic for Inter, providing not only goals but also adding creativity to his game as he formed a supreme partnership with Lautaro Martinez.

Lukaku directly contributed to 35 goals in Serie A alone last season, converting 25 per cent of his 96 shots and creating 52 chances for team-mates, with 10 of those being big chances - defined by Opta as an opportunity from which a player would reasonably be expected to score.

The Belgian averaged a goal every 120 minutes and converted 20 of the 39 big chances that came his way, as Antonio Conte helped get Lukaku back to his best. 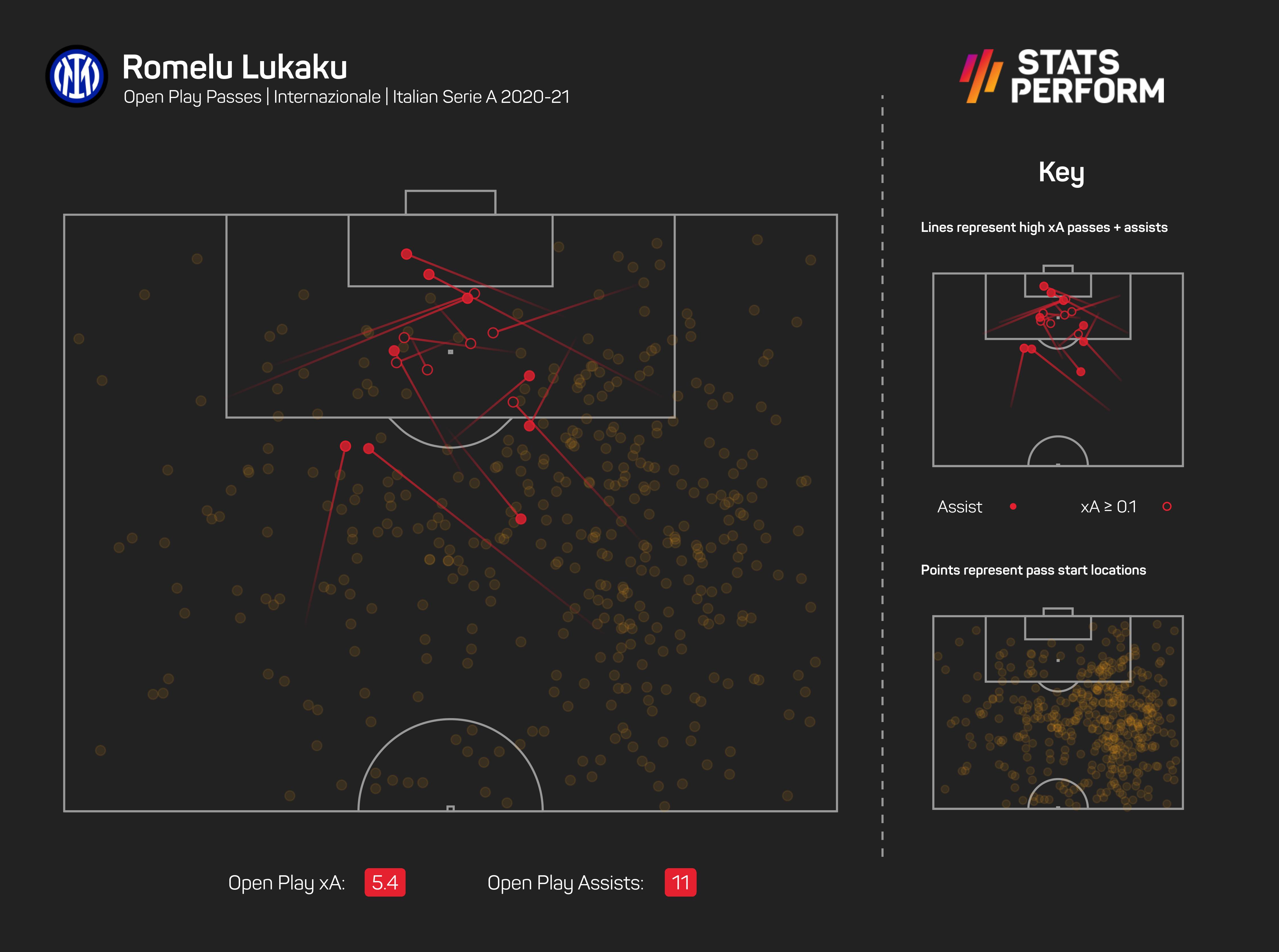 But matters could hardly be more different at Chelsea.

Lukaku has hinted that Tuchel's style does not suit his preferred way of playing, though his ability to drop deep and link the play at Inter seemed to have put the 28-year-old in good stead to do the same with the likes of Timo Werner, Kai Havertz, Mason Mount and Christian Pulisic in west London.

The drop-off has been significant – just 12 Premier League starts, five goals and zero assists, while he has created only 16 opportunities and converted 17.2 per cent of his 29 shots, just 11 of which have been on target.

Lukaku's 12 goals in all competitions do slightly exceed his expected goals (xG) of 11.8, showing he is at least scoring at a rate that reflects the quality of chances that have come his way, though he headed wide from Chelsea's best opportunity of the first leg (0.29 xG). 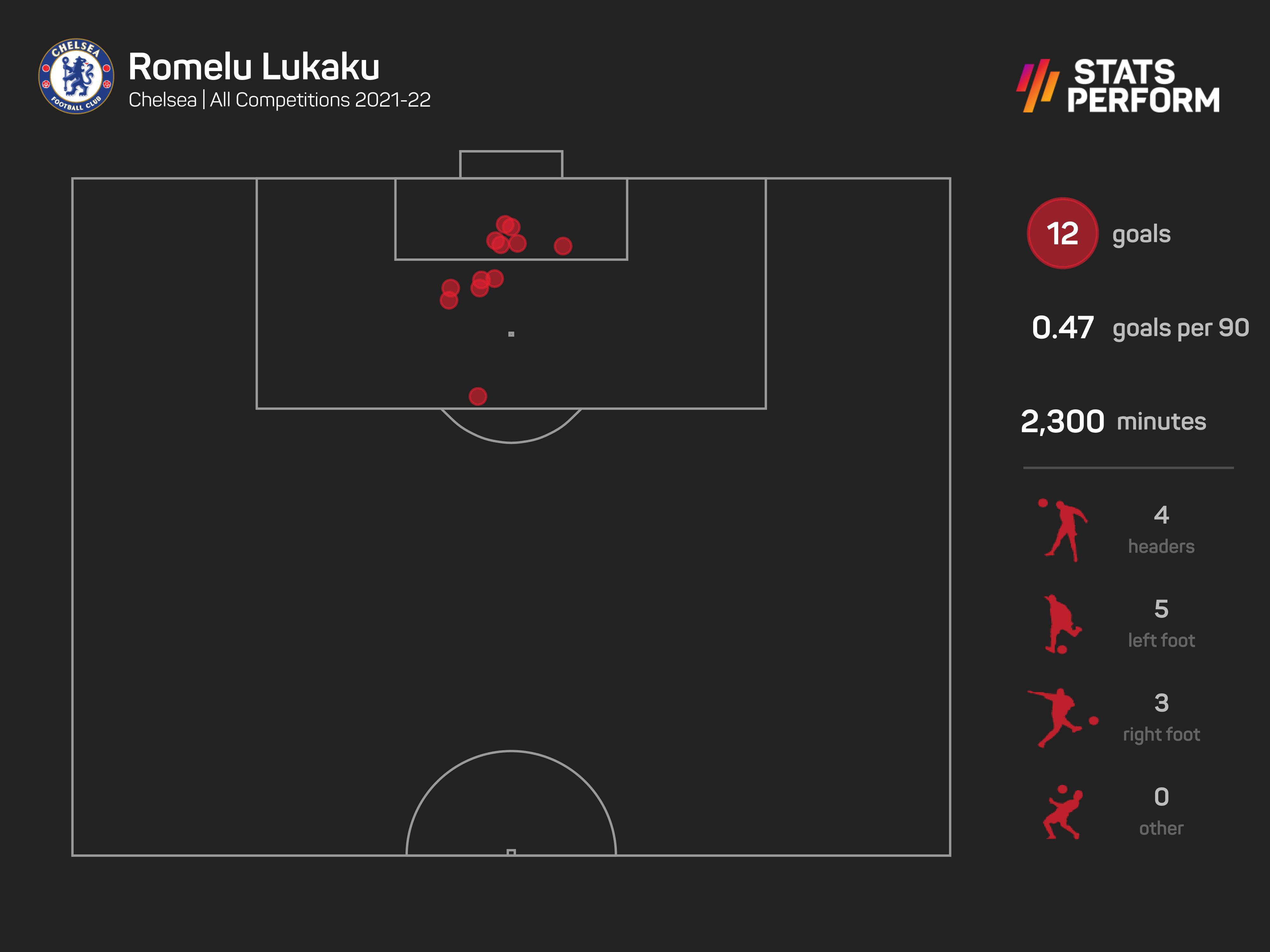 Chelsea won the Champions League without a recognised number nine, given Tammy Abraham's failure to cement a place under Tuchel and Werner's hit-and-miss form, which has continued into this campaign.

Indeed, Havertz netted the winner in Porto against Manchester City last May and in recent weeks has been the player Tuchel has utilised to lead Chelsea's line, even with Lukaku fit. It was the Germany forward who scored for the Blues against Madrid last week and he seems set to continue up front.

All going right for Benzema

In contrast, Benzema is at the very top of his game. His hat-trick at the Bridge took him to 37 goals for the season. That tally far exceeds his xG (28.3), illustrating just how excellent his finishing has been.

That supreme ability was on show in all its glory in the first leg. His opener was a quite wonderful header that he somehow kept down and floated beyond Edouard Mendy - Opta's xG model suggests there was just an eight per cent chance of that opportunity resulting in a goal.

Benzema's second, another header under three minutes later, was equally impressive, while his third came as a result of his aggression in the press, forcing a mistake that gave him a simple finish into an empty net.

Similar to Lukaku in Serie A last season, Benzema is converting roughly a quarter of his attempts across all competitions, and he has already crafted 66 chances for others and contributed 13 assists.

Of strikers in Europe's top five leagues, only Robert Lewandowski has scored more goals than the Frenchman, who has as many assists as Lionel Messi and scores every 84 minutes. 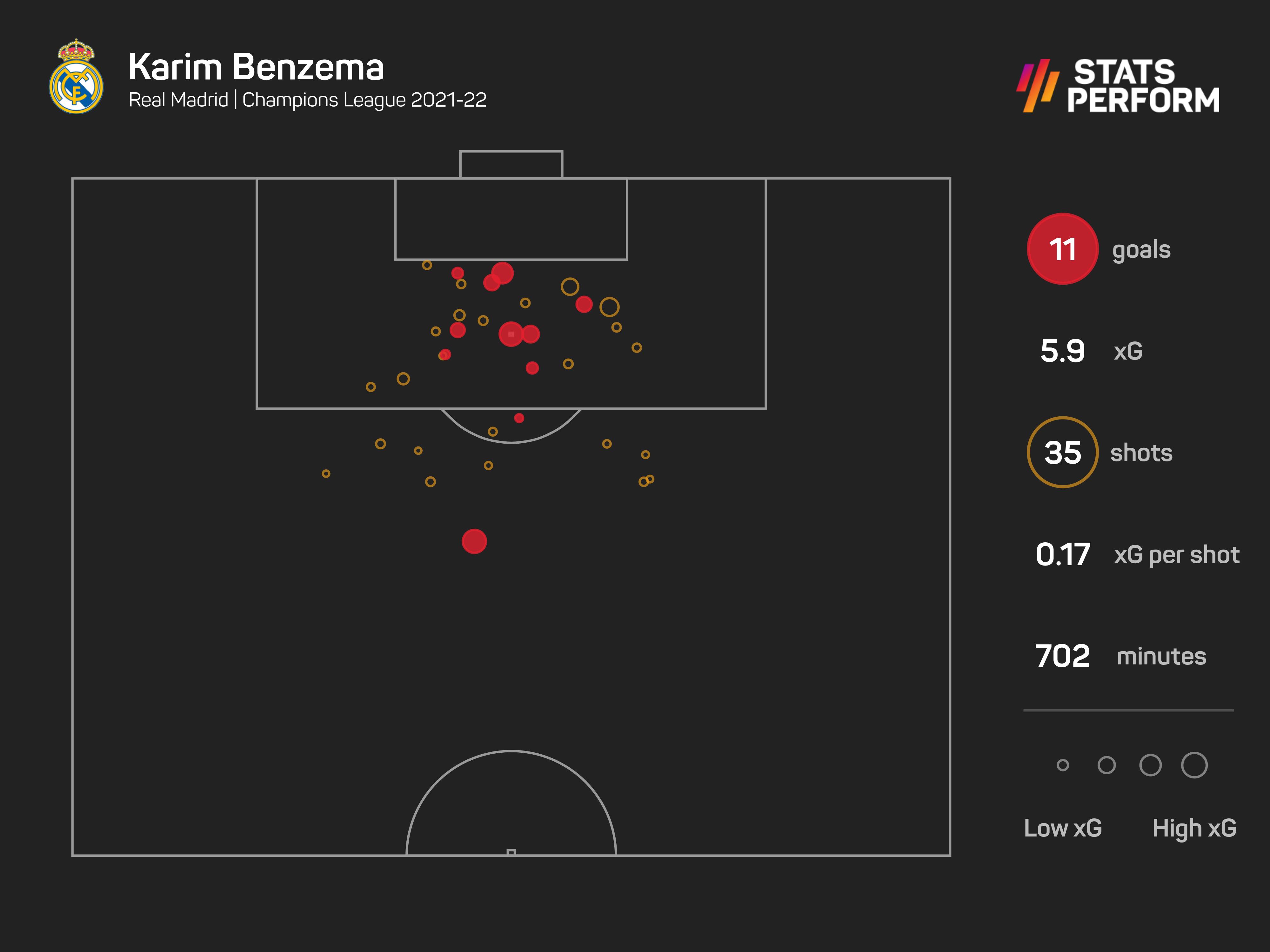 Benzema is the heartbeat of a Madrid side pushing for a double, crucial to everything Los Blancos do in attack, dropping into midfield to aid the build-up as well as being in the right place to finish chances.

Lukaku, meanwhile, is on the periphery at Chelsea and though the £97.5million (€115m) outlay may yet prove worthwhile, he is not going to be able to stand up and be counted when his side might just need him the most.

That, perhaps, is a sign it was simply never meant to be for Lukaku at Chelsea after all.