After a sensational 2020 for Bayern Munich, Robert Lewandowski has been nominated for the Laureus World Sportsman of the Year Award.

Robert Lewandowski heads a stellar list of nominees for the Laureus World Sportsman of the Year Award after a golden 12 months for Bayern Munich.

Poland striker Lewandowski enjoyed a memorable 2020 for the German giants, with his impeccable performances helping Bayern to a Bundesliga, DFB-Pokal and Champions League treble.

Across the top-five European leagues, no player could match Lewandowski's 45 goals scored in all competitions from January 1 to December 31 with Cristiano Ronaldo his nearest rival on 41.

In that 12-month period, only Barcelona great Lionel Messi (115) and Juventus superstar Ronaldo (85) registered more shots on target than Lewandowski's 83, while a shot-conversion rate of 34.09 was the fifth highest among players to score at least 20.

Reflecting his all-round contribution, Lewandowski recorded 12 assists in the calendar year, with team-mate Thomas Muller leading the way on an impressive 21.

Unsurprisingly, Lewandowski won a fifth Torjagerkanone (awarded to the Bundesliga's top scorer) overall and a third in a row thanks to 34 Bundesliga goals in 2019-20, higher than an expected goals rate of 26.9. His 15 goals in the Champions League were also a competition high. 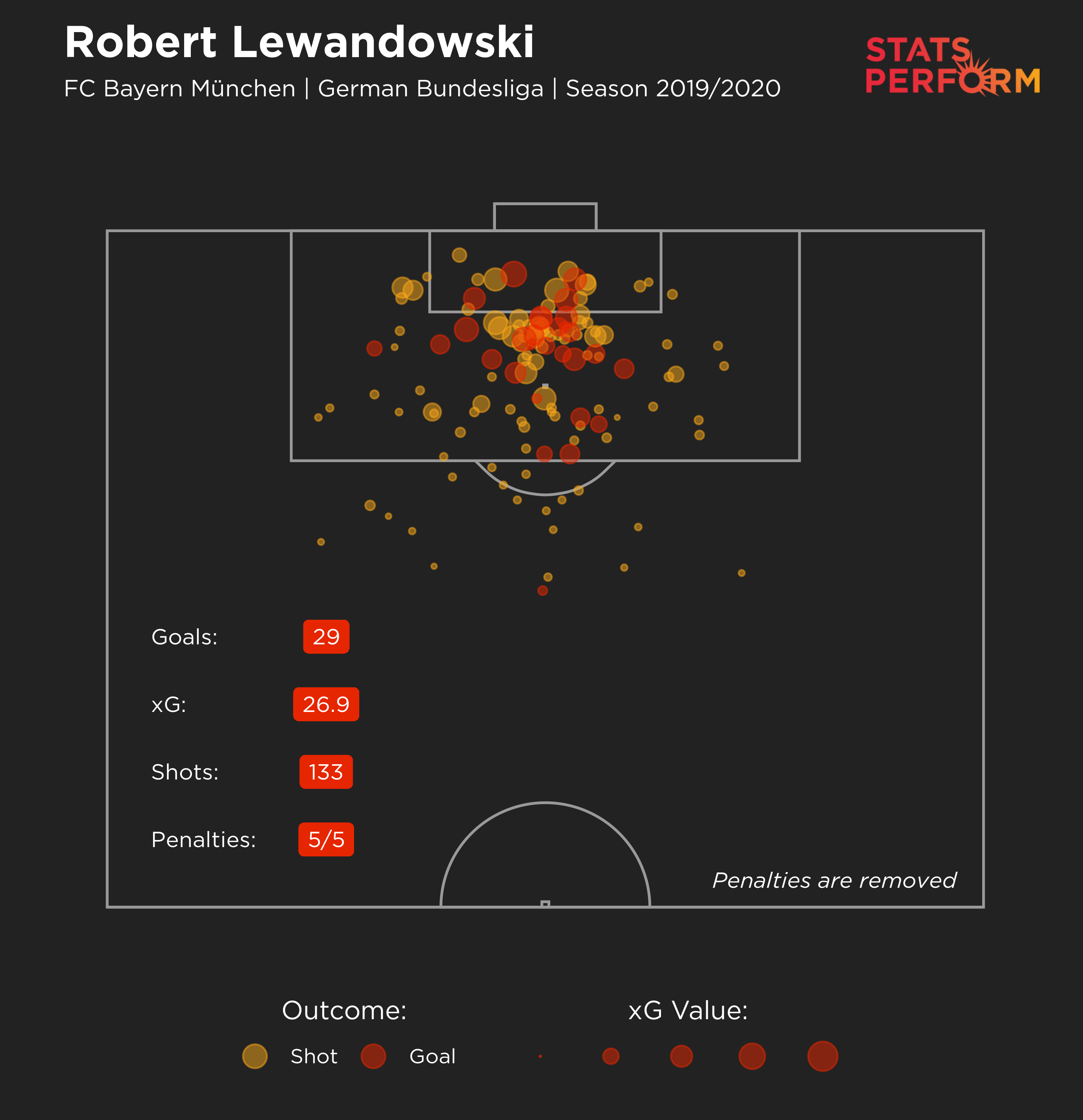 Speaking on his nomination, Lewandowski said: "I have been working so hard for many, many years to reach the point I did in 2020 and I am grateful that the world’s media acknowledged that.

"I was honoured to win the FIFA Best Player Award and now to be nominated for this Laureus Award is special.

"I know that Lionel Messi is the only team player to win, and he had to share it with Lewis Hamilton, so maybe I can go one better. Thank you to the hundreds of members of the international sports media who voted for me. It is a great honour for me."

In a stacked deck, James is included after a year that saw him win a fourth career NBA title and first with the Lakers, while he also claimed a fourth Finals MVP award.

Across six games in the Lakers' 4-2 triumph over the Miami Heat, James averaged 29.8 points, 11.8 rebounds and 8.5 assists, while he shot 59.1 per cent from the field and drained 41.7 per cent of three-point attempts.

Mercedes driver Hamilton won a seventh F1 drivers' title in 2020 to match the overall record of the legendary Michael Schumacher.

During another sensational season, the Briton reached 95 career race wins, which surpasses the previous benchmark of 91 set by Schumacher.

In a calendar year disrupted heavily by the coronavirus pandemic, Nadal still had personal reason to celebrate after winning a record-extending 13th French Open title.

His triumph at Roland Garros means he now stands alongside Roger Federer on 20 grand slams – the most achieved in the men's game.

Uganda's Cheptegei broke both 5,000 and 10,000 metres world records in 2020, while Duplantis of Sweden broke the indoor and outdoor pole vault record.

Tennis' global superstar Naomi Osaka is nominated for the Laureus World Sportswoman of the Year Award.

The Japanese was champion at the US Open in 2020, which took her career slam tally to three. She recently made that four by winning the first major of 2021 at the Australian Open.

Osaka said: "It is an honour to once again be nominated for a Laureus Award by the world's media.

"For me this is special because Laureus sees the big picture – not just sport on the court or the pitch, but how it can help young people around the world. This is a time that sport can make a big difference in so many ways and really help to change the world."

Cyclist Anna van der Breggen – who won both the road race and time trial at the World Championships – is up for the prize, as is skier Federica Brignone, the first Italian woman to win the overall World Cup.

Bayern, the Lakers and Mercedes are all up for the World Team of the Year Award, as are Liverpool, who won a first English top-flight title in 30 years.

The Kansas City Chiefs make the list after winning a first Super Bowl since 1970, while Argentina's men's rugby team are nominated after earning a first ever win over three-time world champions New Zealand.

Patrick Mahomes' role in the Chiefs Super Bowl win earned him a nomination for the World Breakthrough of the Year Award, with Iga Swiatek up for the prize after winning the women's singles at the French Open aged 19, the youngest slam winner since 1990.

Australian Open: Halep in 'good spot' for deep run after cruising into fourth round

The draw is opening up for former Australian Open runner-up Simona Halep who is feeling physically good after a difficult 2021.

Aslan Karatsev was a semi-finalist at last year's Australian Open, but Adrian Mannarino took his scalp this time in a post-midnight finish.

Rafael Nadal moved into the fourth round of the Australian Open by defeating Karen Khachanov on Friday.

Rafael Nadal negotiated his way past Olympic silver medallist Karen Khachanov as he moved into the fourth round of the Australian Open.

Australian Open: 'This is the biggest step, even though I lost' – Osaka proud despite defeat

Amanda Anisimova eliminated Naomi Osaka from the Australian Open on Friday, but the defending champion reflected with pride.

Australian Open: Barty had no expectations of Osaka meeting

"My expectation was whoever it would be." Ash Barty is ready for Amanda Anisimova at the Australian Open.

Australian Open: Djokovic will take a while to get over 'unjust' deportation, says long-time coach

World number one Novak Djokovic was denied the chance to defend his Australian Open title, a decision his coach has insisted was "unjust".

Scott Jamieson battled hard to hold the lead on day three in Abu Dhabi, but the pressure will be on in Sunday's play.