Karim Adeyemi is inspired by the former Salzburg stars who have gone on to establish themselves as household names in European football as he plots a move of his own.

Adeyemi joined Salzburg in 2018 after spending six years with his local side in Germany, Unterhaching. He had joined them shortly after leaving Bayern Munich's academy.

While he did not fit in with the culture at Bayern, Adeyemi developed into a highly sought-after talent at Unterhaching, attracting the attention of clubs such as Chelsea before ultimately becoming the most expensive under-18 German player ever at the time when joining Salzburg for €3million.

After spending a season and a half at sister club Liefering, Adeyemi returned to Salzburg in January 2020 and has steadily built up his minutes. The 2020-21 season was something of a breakout campaign as he scored seven times in 29 appearances, though in 2021-22 he has established himself as the club's latest star and a full international with Germany.

Numerous big clubs such as Liverpool, Chelsea and Borussia Dortmund have been linked with him in recent times, with the 19-year-old seemingly unlikely to be in Austria next season.

While some might urge him to be cautious and choose another club that will help his development, Adeyemi is aiming high.

Asked about Salzburg's impressive list of alumni, Adeyemi told Tuttosport: "It's true, in recent years a lot of young players have matured in Salzburg and then landed at the best international clubs.

"I'm thinking of Erling Haaland, but also of Sadio Mane and Naby Keita of Liverpool, or Dominik Szoboszlai, who moved to RB Leipzig.

"Obviously, I also have this goal: I would like the next stage of my career to be at a top club." 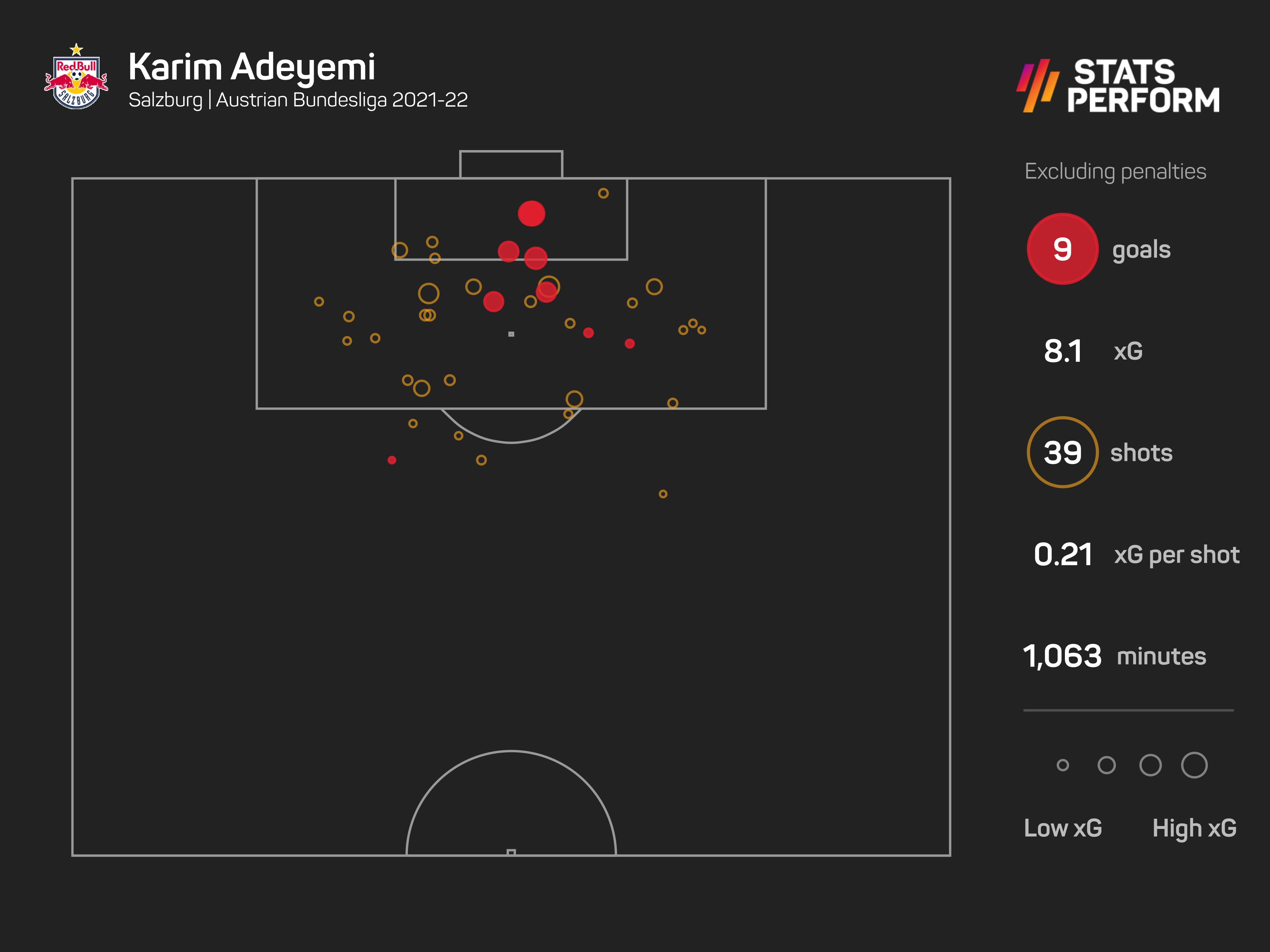 Adeyemi is enjoying a wonderful campaign and does appear to be outgrowing – or have outgrown – the Austrian Bundesliga.

The 19-year-old had previously been used across the front, but this term he has really nailed down a spot as Salzburg's main striker. He may not be the tallest, but he has bulked up, possesses immense speed and is proving a reliable finisher.

Adeyemi has 11 goals in 15 Bundesliga appearances – excluding penalties, his tally of nine is only slightly higher than his non-penalty expected goals (8.1 xG) as well, which suggests he is not just in the midst of a lucky streak.

His 26.8 per cent conversion rate is also the third-best in the division among players with at least 20 shots, evidence of impressive maturity in terms of shot selection, especially given his age.

Another key dimension to his style of play is running with the ball. He has attempted 14 more dribbles than anyone else in the division this season (79) and completed the most (32) as well – granted, his success rate of 40.5 per cent is not extraordinary, but it is worth remembering as a striker he will be attempting those dribbles in the most congested areas of the pitch.

In terms of end product at the end of a ball carry, only five players can better his 16 shot involvements (shots taken and assisted), and Adeyemi is well aware of the role Salzburg have played in nurturing himself and other young players. 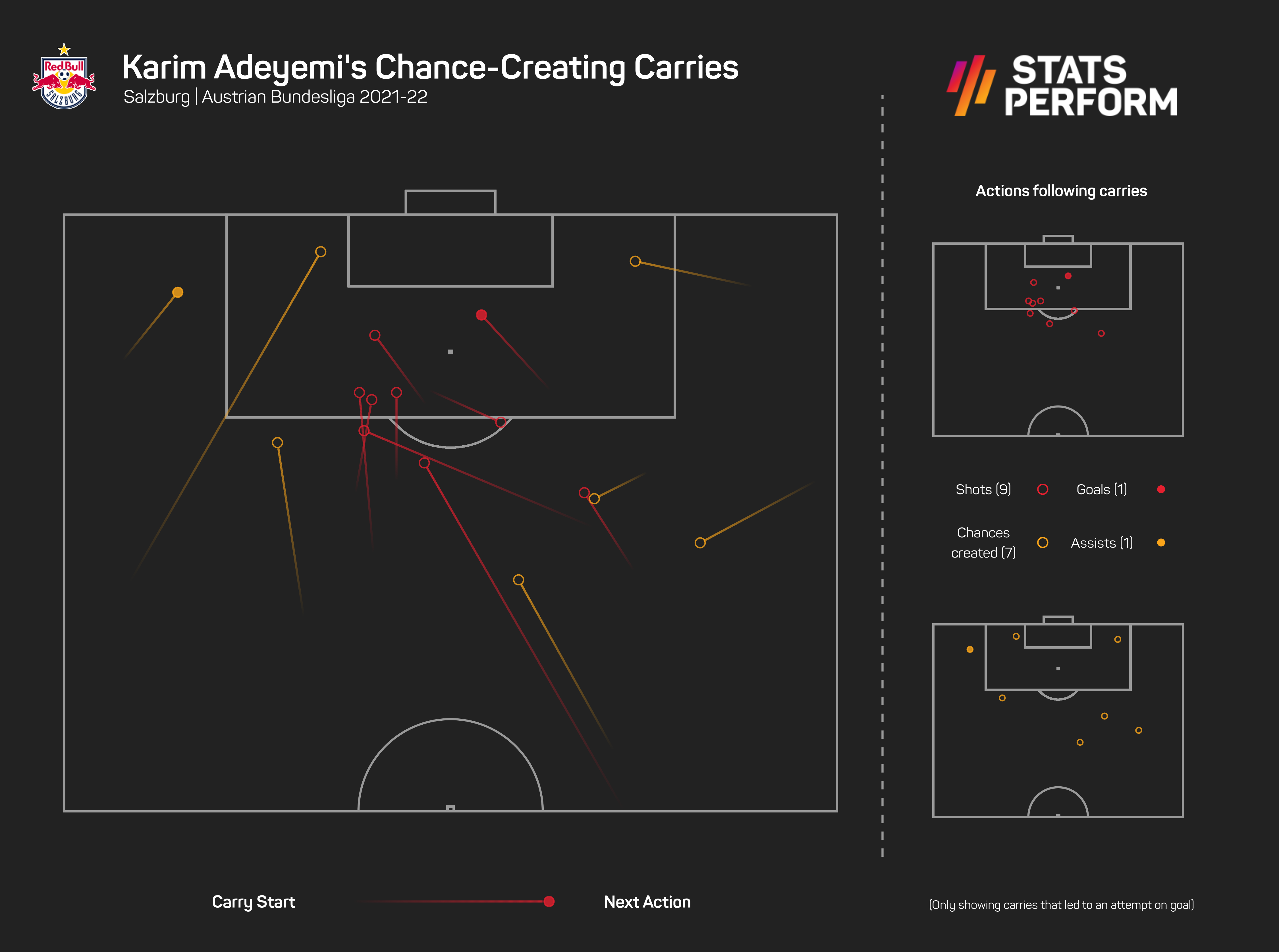 "The experience at Unterhaching was very important, but for the first time I played at a really high level with Salzburg," he continued.

"It's a fantastic club for young people like me. They throw you in right away and give you the chance to get to a high level quickly.

"Competing for the title of the Austrian championship is very helpful for the growth of a young person, it gives you experience.

"Equally important is the possibility of being protagonists in international competitions. This year we are in the group stage of the Champions League for the third season in a row, a fact that is far from obvious for a club in a small league like the Austrian one.

"In the Champions League we face the best teams and top players in the world: these experiences are priceless."