Rafael Nadal's hopes of landing a first calendar slam remain alive after he dug deep to edge Taylor Fritz in a fifth-set tie-break and reach the semi-finals of Wimbledon.

Nadal, who was regularly checked over by his physio, will now face Nick Kyrgios as he looks to add to the Australian Open and French Open crowns already won this year.

Fritz had not dropped a single set en route to the final eight, but facing Nadal initially appeared a challenge too far when the Spaniard broke his serve in the opening game.

However, the number 11 seed responded brilliantly by whittling off five games in a row – breaking Nadal twice – to take the first set and lay down a real marker.

He could not carry that momentum into the second set, with Nadal racing into a 3-0 lead, but the 22-time grand slam winner was struggling with an abdominal injury at that point.

With mistakes again creeping into his game, Nadal called for a medical time-out when pegged back to 4-3, though he was able to successfully serve out the set to level up.

Fritz, who ended Nadal's 20-0 match streak in their most recent meeting in the Indian Wells final earlier this year, took a relatively one-sided third set to regain the lead.

Both players struggled to hold in a tense fourth set, which was tied at 5-5 with the serve in Fritz's favour, only for Nadal to show incredible resolve to break and force a decider.

The final set went the way of the serve until a mammoth seventh game when, at the fourth time of asking, Nadal took his big opportunity, yet the fearless Fritz hit back in the next game as the match went the distance.

But it was Nadal who held his nerve in the tie-break, with a stunning cross-court forehand seeing him break Fritz's serve for the first of five points in a row to get over the line in a match spanning four hours and 20 minutes. 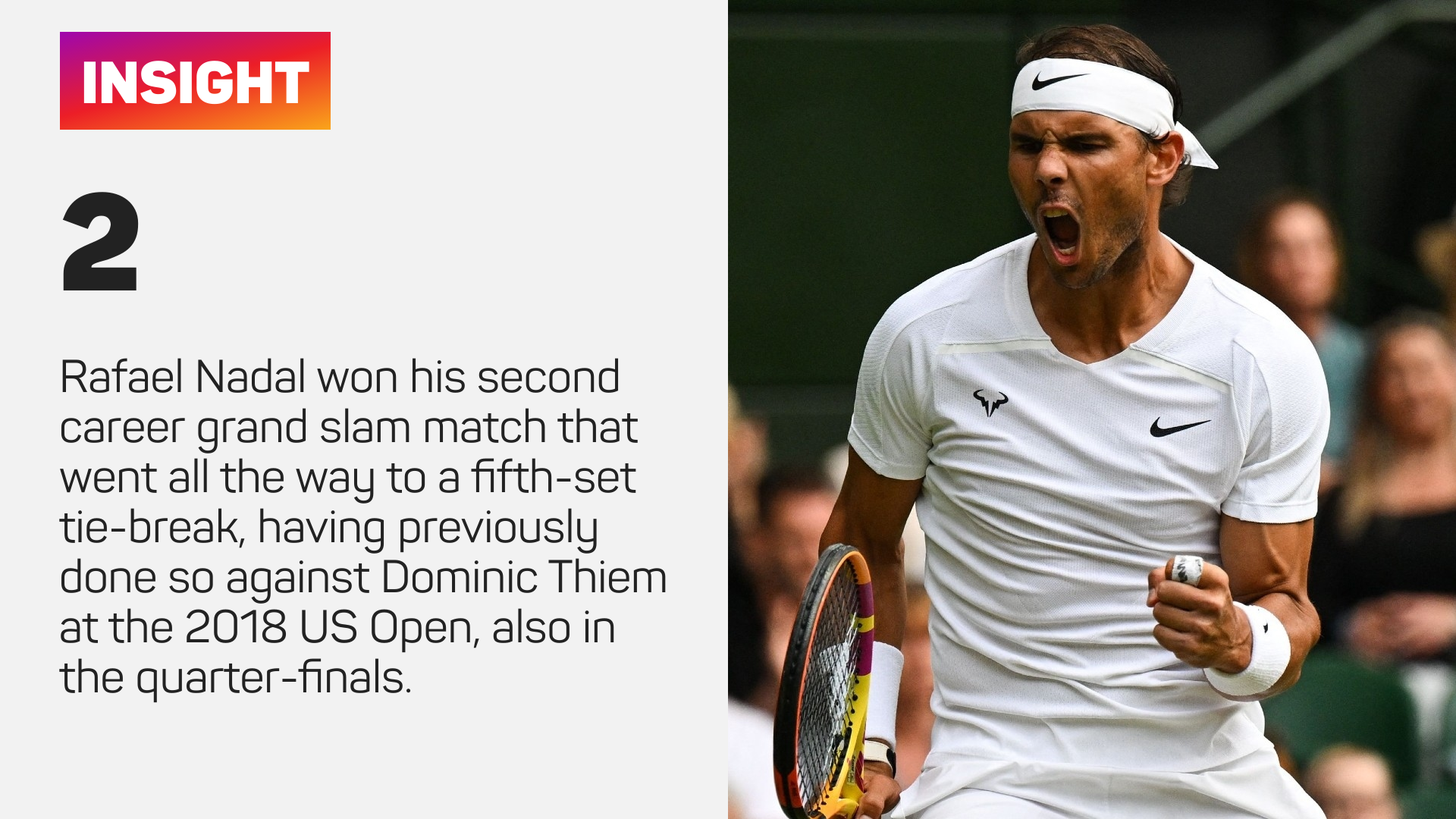 Nadal's victory was just his second ever in a fifth-set tie-break at a grand slam, having previously prevailed against Dominic Thiem in the quarter-finals of the US Open in 2018.

The Spaniard, who remains on course to meet Novak Djokovic in Sunday's final, now has 19 straight grand slam wins in 2022 – three short of his own record of 21, which he set in 2010.

Alex Molcan booked a second-round match against world number seven Casper Ruud after a strong win on the opening day of the Canadian Open.

The great Serena Williams was relieved after securing her first singles victory in over a year in Toronto.

Serena Williams wins first singles match in over a year

Having not felt that winning feeling in singles tennis since the 2021 French Open, Serena Williams finally did so on Monday in Toronto.

Russia's Daria Kasatkina took control of the final after a closely contested opening set, and has earned a top-10 ranking in the process.

Nick Kyrgios is leaving Washington with two trophies after winning the singles final, and combining with Jack Sock for the doubles crown.

Liudmila Samsonova did not waver after dropping the first set, storming back to beat Kaia Kanepi in the final in Washington.

Daniil Medvedev capped an excellent week by winning the title in Mexico after extending his stay as world number one.

Second seed Paula Badosa bowed out in the Silicon Valley Classic semi-finals while Shelby Rogers reached her first final since 2016.