Garbine Muguruza was chasing a second Wimbledon title, but Ons Jabeur saw her off to set up a tantalising clash with Iga Swiatek.

Ons Jabeur ended the Wimbledon title hopes of Garbine Muguruza with a Centre Court triumph she hailed as the biggest moment yet in her career.

The Tunisian followed up a second-round win over veteran five-time champion Venus Williams by eliminating 11th seed Muguruza, brilliantly plotting her path through a treacherous draw.

A 5-7 6-3 6-2 victory for 21st seed Jabeur sets up a stellar fourth-round clash with Iga Swiatek, the 20-year-old Polish rising superstar who scored a sizzling 6-1 6-0 win earlier against Irina-Camelia Begu.

Swiatek won the French Open last year and is the seventh seed at Wimbledon.

Muguruza found a way to win through the opening set against Jabeur, but thereafter she was second best against a player who won her first career title last month in Birmingham.

That Birmingham success had been coming for a long time, with Jabeur becoming an increasing force on the women's tour, but she came to Wimbledon with nothing to call upon in terms of previous success at the grass-court grand slam.

Two first-round exits came either side of a 2018 second-round loss, but Jabeur looked right at home on the big stage against Muguruza, the 2017 champion and former world number one.

"I'm good. I can play another match now, you know!" said Jabeur, almost breathless, immediately after the contest.

"I'm very happy and honestly this is the first time I've been on Centre and it was amazing energy guys, thank you."

Interviewed in front of a crowd who took to her tennis and warm personality, Jabeur was asked whether this was the best day of her career.

The 26-year-old responded: "It is! Seriously. I'm not saying this so you guys can cheer for me for the next round, but this is my favourite centre court I play. The energy's amazing. I'm so, so, so happy."

Jabeur could not take a first match point but then lashed down a serve that Muguruza could barely get a racket to and followed that point by finishing off a baseline rally with a thumping forehand winner into the left corner.

It was some victory for the player who became the first Arab winner on the WTA Tour with that Birmingham final triumph over Daria Kasatkina.

Against Muguruza, Jabeur fired 44 winners against 27 unforced errors, a healthy ratio, and won 18 of 22 points when she went to the net. 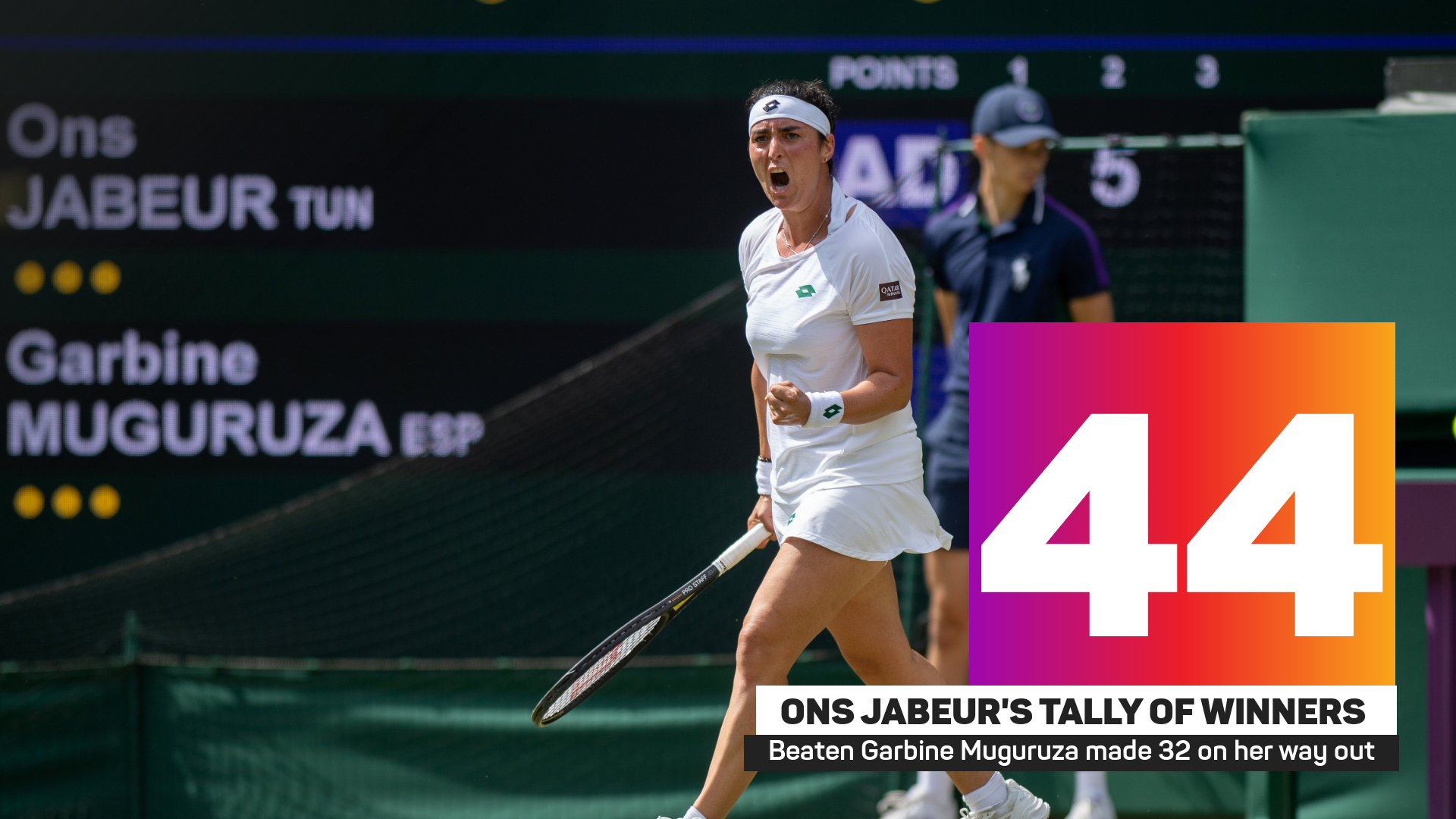 As Muguruza trudged off, disappointed, Jabeur reflected on how the match went better than their previous meeting, when the Spaniard won in a deciding-set tie-break at Hobart last year.

"She plays unbelievably on grass and everybody knows that," Jabeur said. "I lost against her last time, but this was my revenge here – in a nice way.

"I tried my best. It was difficult in the first set, we weren't reading our serves, but then after the second set I tried to stay more calm and enjoyed playing here.

"I was more aggressive, trying to do some drop shots and going into the net.

"Sometimes when I play loose and good my forehand gets better, and everything gets better."

Roberto Bautista Agut exited surprisingly early but Casper Ruud and Filip Krajinovic battled through to the quarter-finals in Austria.