Williamson: Black Caps not favourites for elusive win in India

New Zealand have not won a Test in India since back in 1988 and Kane Williamson knows they face a "big challenge" to end that wait.

Kane Williamson insists New Zealand will not be favourites when they start the defence of their World Test Championship title against an under-strength India side in Kanpur on Thursday.

The Black Caps beat India by eight wickets in the inaugural World Test Championship at the Ageas Bowl in June, so India will be out for revenge in the two-match series on home soil.

Virat Kohli has been rested for the first Test, so Ajinkya Rahane takes charge of a team that will not include Rohit Sharma, KL Rahul, Jasprit Bumrah, Mohammad Shami and Rishabh Pant.

Rohit, Bumrah, Shami and Pant have been given a rest for both games, while Rahul misses out due to a thigh strain.

India have plenty of strength in depth, though, and you have to go back 33 years for the last time they lost a home match against the Black Caps in the longest format.

New Zealand captain Williamson sat out India's 3-0 T20I whitewash of the tourists, which came so soon after his side had been beaten by Australia in the T20 World Cup final in Dubai.

The prolific batsman knows the Black Caps face a huge challenge, particularly without the opportunity to play any warm-up games.

He said: "I don't think we are favourites. One of the key strengths of Indian cricket is its depth. India has great knowledge of their own conditions, we know the challenge is a big one."

Williamson added: "As we have seen in this part of the world, the spin component has been very large and it has played a big role in changing the complexion of the game.

"I am sure throughout the whole series, the spin component will be a factor and it will be no different in Kanpur. It will be all about assessing the conditions as quickly as possible." 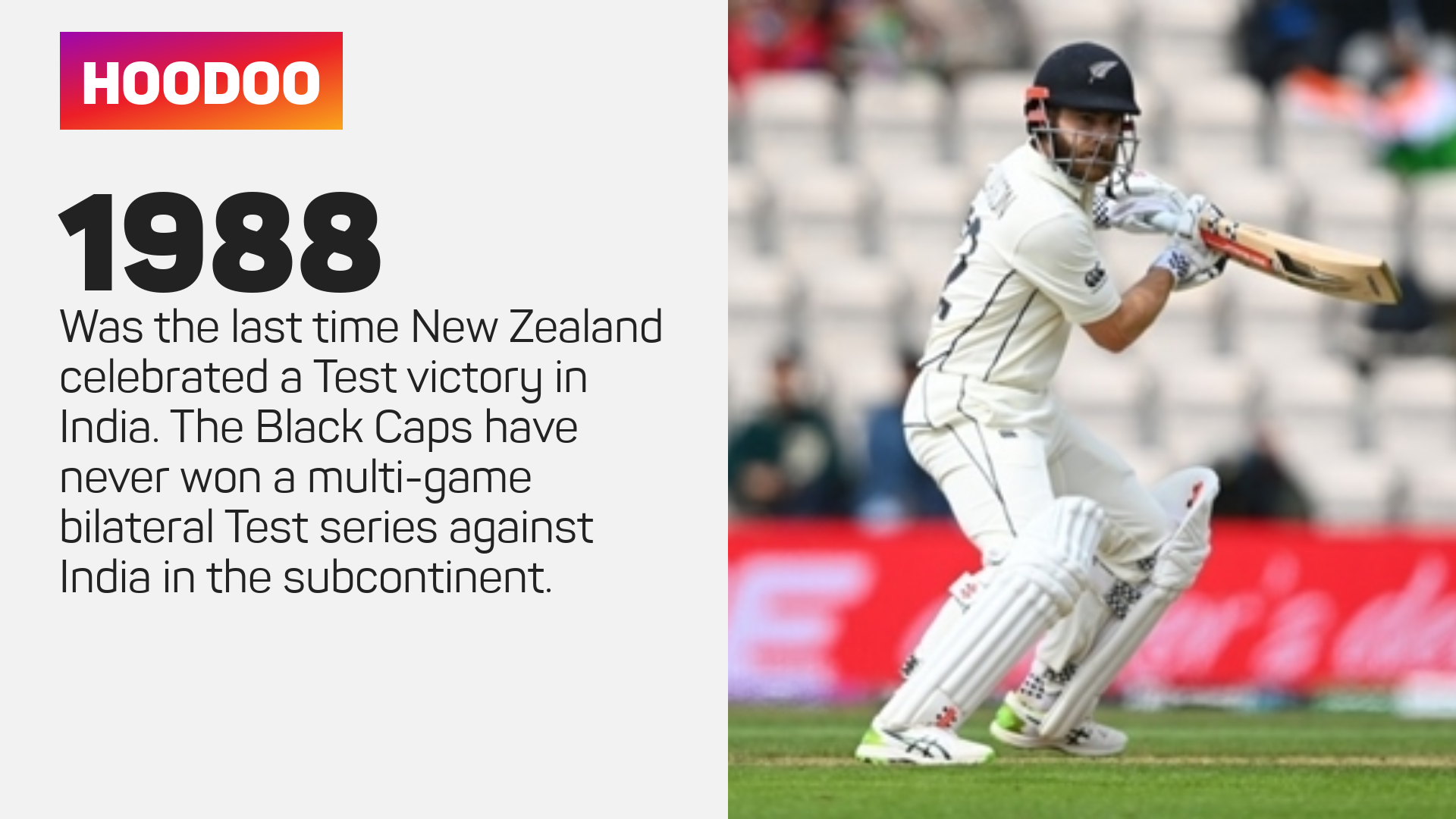 Shreyas Iyer will make his debut after Rahul was ruled out and is set to come into the middle order, with Shubman Gill to open with Mayank Agarwal.

The 26-year-old right-hander averages 52.18 in first-class cricket, scoring 12 centuries and boasting a strike-rate of 81.54.

Rahane hinted that India may play three spinners, stating: "We are not too sure of the combination. But in India you generally get spin-friendly wickets, the ball generally keeps slightly low and slow.

"We expect that but not too sure how the wicket will play. We will have to wait until tomorrow and assess from there."

All set to don the whites

Refreshed Jamieson closing in on half-century

Kyle Jamieson joined Williamson in missing the T20I series as the Black Caps managed his workload.

The paceman has made an outstanding start to his Test career and was man of the match when New Zealand beat India in the final in Southampton, having claimed match figures of 7-61.

Four wickets shy of 50 in the longest format, it would be a surprise if Jamieson does not come straight back into the team, particularly with Trent Boult not involved in the series.

New Zealand, who are unbeaten in nine Tests and have never gone 10 without defeat, must decide who replaces Devon Conway (broken hand) at the top of the order, with Will Young appearing set to get the nod.

Intensity the key for Root in 'crucial' Ashes practice

England are set for a four-day warm-up fixture with England Lions and Joe Root sees it as a chance to gain an advantage over Australia.

Azeem Rafiq's revelations on his time at Yorkshire have led to much discussion on racism, but Ashley Giles believes education is key.

The England and Wales Cricket board have released an action plan to tackle racism within English cricket.

South Africa and Netherlands may scratch their three-match series after one abandoned ODI, and the Dutch are now wondering how to get home.

New Zealand had much the better of day two of the second Test against India, closing on 129 without loss and trailing by 216 runs.