Fresh from winning Olympic gold in Tokyo, Primoz Roglic is the favourite to claim a third consecutive Vuelta a Espana title.

Primoz Roglic will start his quest for a hat-trick of Vuelta a Espana titles when the final Grand Tour race of the year starts in Burgos on Saturday.

Team Jumbo-Visma rider Roglic has won the Vuelta in each of the peast two years and is favourite to continue his dominance of the race.

Giro d'Italia champion Egan Bernal will be expected to mount a strong challenge after skipping the Tour de France, while the Colombian's INEOS Grenadiers team-mates Richard Carapaz and Adam Yates could have a big say.

This 76th edition of the race will have eight mountain top finishes, with 11 stages featuring mountains, including the Picon Blanco with a gradient in some sections of the climb at 17 per cent.

Stats Perform picks out the big stories and standout Opta facts ahead of a race that will finish in Santiago de Compostela on September 5.

The 31-year-old abandoned the Tour after a brutal first week but should start the Vuelta on a high from his heroics in Japan.

Roglic will be bidding to move level with Tony Rominger and Alberto Contador on three Vuelta triumphs if he wins the red jersey – one shy of Roberto Heras' record.

He would also become the first rider to win the race three times in a row since Spaniard Heras in 2005. 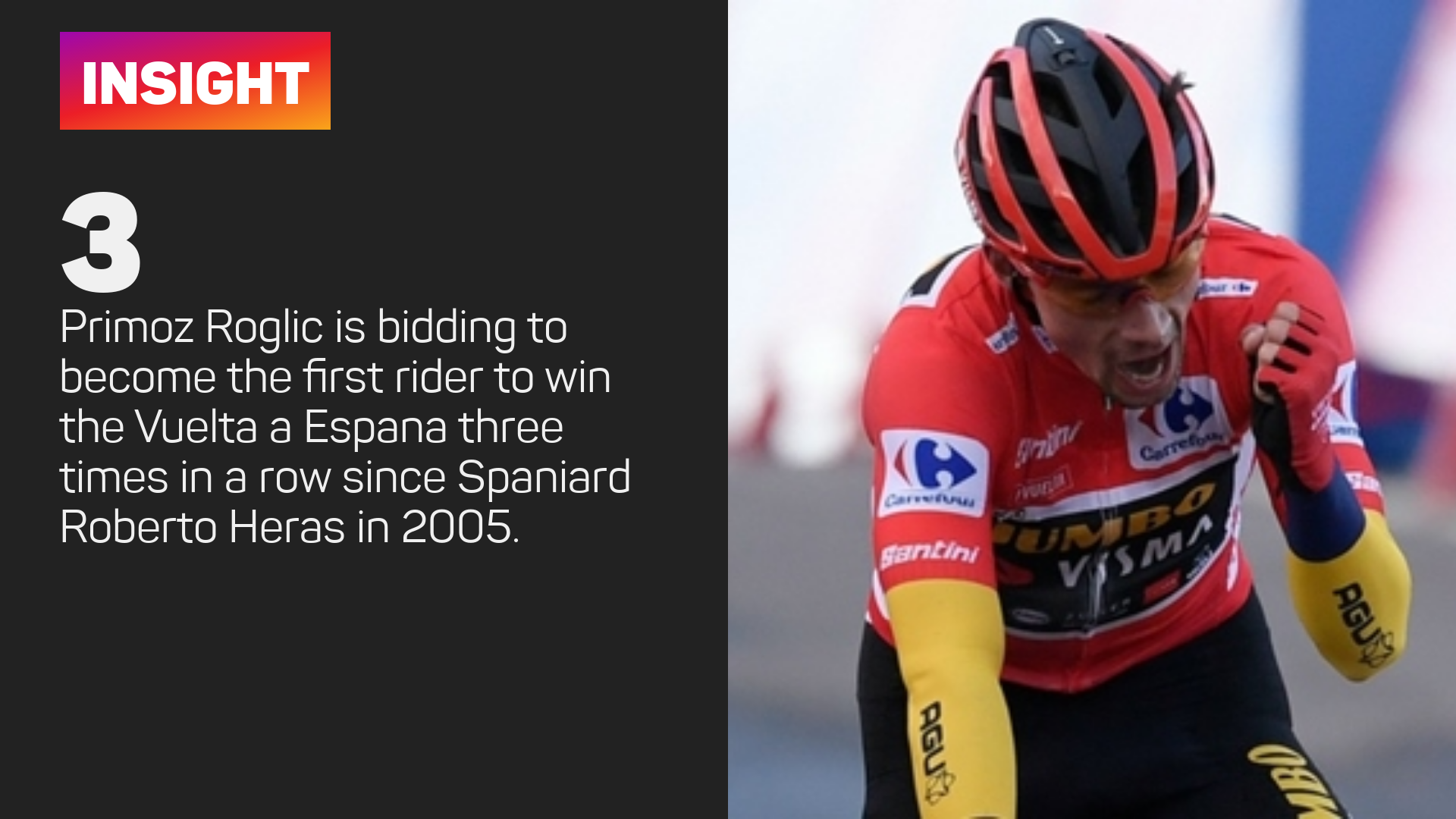 Bernal claimed his maiden Giro title this year after winning his first Grand Tour crown in the 2019 Tour.

The 24-year-old sat out the 2021 Tour and has been training at altitude in his homeland ahead of a bid to complete a clean sweep of Grand Tour titles.

Bernal could become only the third Colombian to win the race, with Nairo Quintana being the last in 2016.

INEOS have a strong hand as Carapaz and Yates plot a title challenge.

No Spanish rider has triumphed in the previous six editions of the race on home soil. If that extends to seven, it will be an unwanted record drought.

But Mikel Landa is hopeful of topping the podium after winning the Vuelta de Burgos following his recovery from a broken collarbone and several broken ribs suffered in a Giro crash.

He told the Deia: "Winning the Vuelta de Burgos was unexpected, but it was a great morale boost after so long out injured.

"Now I am going to the Vuelta with optimism. At the end of the day, I haven't competed much this year and I have the bit between my teeth after the Giro. I know I have to be careful, because I am still lacking a bit of form, but I am very motivated."

The Tour de France starts on July 1 in Copenhagen, but numerous riders have contracted coronavirus in recent weeks.

Tadej Pogacar is warming up for his Tour de France title defence at the Tour of Slovenia, and his preparations are panning out well so far.

Dutch rider Tom Dumoulin will no longer feature for Jumbo-Visma next season as the former Giro winner has announced his intention to retire.

Jai Hindley became the first Australian to win the Giro d'Italia after he kept himself ahead of Richard Carapaz in the final time trial.

Belgian Dries De Bondt was rewarded for being among a breakaway group when he darted to a first Grand Tour stage win.

Giro d'Italia: Hirt withstands the pain as Hindley closes in on Carapaz

Giulio Ciccone hailed the "most beautiful win" of his cycling career after storming to a stage-15 triumph at the Giro d'Italia.